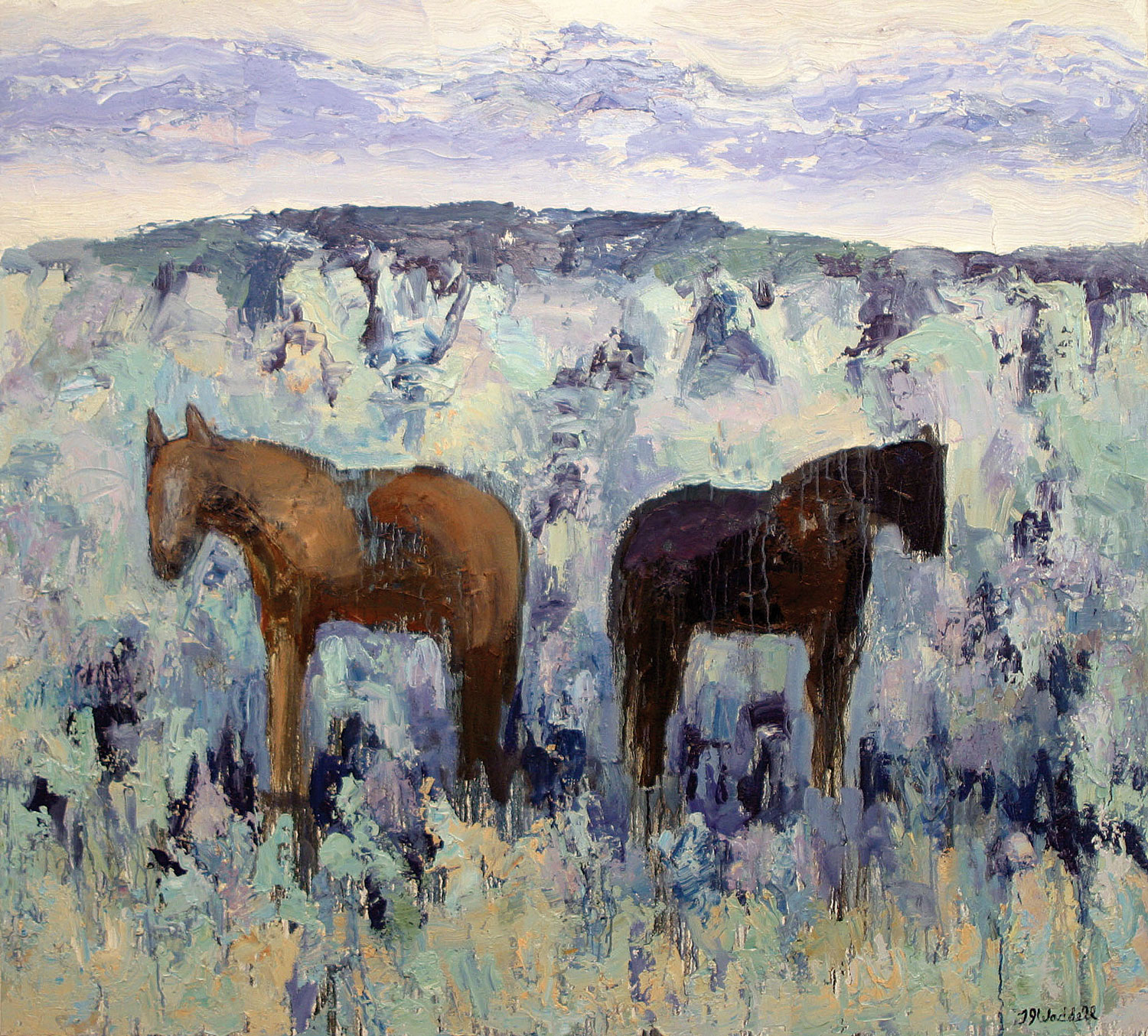 13 Aug Bonded by Work: The Art of Ted and Arin Waddell

PLENTY OF WESTERN ARTISTS AND THEIR CRITICS LIKE TO TALK ABOUT “PLACE” as a primary inspiration for their work, but when artist Ted Waddell speaks of the landscape, he refers to the actual ground itself. His use of the word “ground” when one expects to hear “land” cuts to the heart of what “landscape” means for him: It’s not so much an abstract sense of visual beauty, but a tactile sense of its features — the smell of sage, the chalky bones one sees here and there, the flush of a pheasant, or the distant bark of a coyote. “Ground” evokes an intimate knowledge of the dirt, whereas “land” suggests something more akin to what realtors trade in. 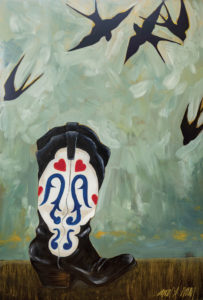 The distinction underscores the fact that neither Ted nor his daughter and fellow artist Arin Waddell spend much time making paintings one could call “landscapes” in the classical sense, and yet their work — in vastly different fashions — is saturated with the West. Though their styles are profoundly different, what connects them is a sense of what’s directly beneath their feet. Like her father, Arin works primarily in oils, though lately she’s started an enterprise called “Art off the Wall” that involves transferring high-resolution replications of her paintings onto fabric used for decorative pillows. Whereas her father’s work is often categorized as abstract expressionist, Arin’s paintings tend to be more whimsical, employing iconic images — flowers, birds, or even a sundress — but presenting them in a way that urges metaphor.

Arin represents a third generation of artists, as Ted likes to point out that his father was a painter as well: He painted boxcars for the Northern Pacific railroad. “Maybe it was the smell of the turpentine that hooked me on making art,” Ted says, with a distinct Waddell twinkle in his eye. “But my dad would always take me around to the local artists in Laurel. I think he wanted me to see people making art.” 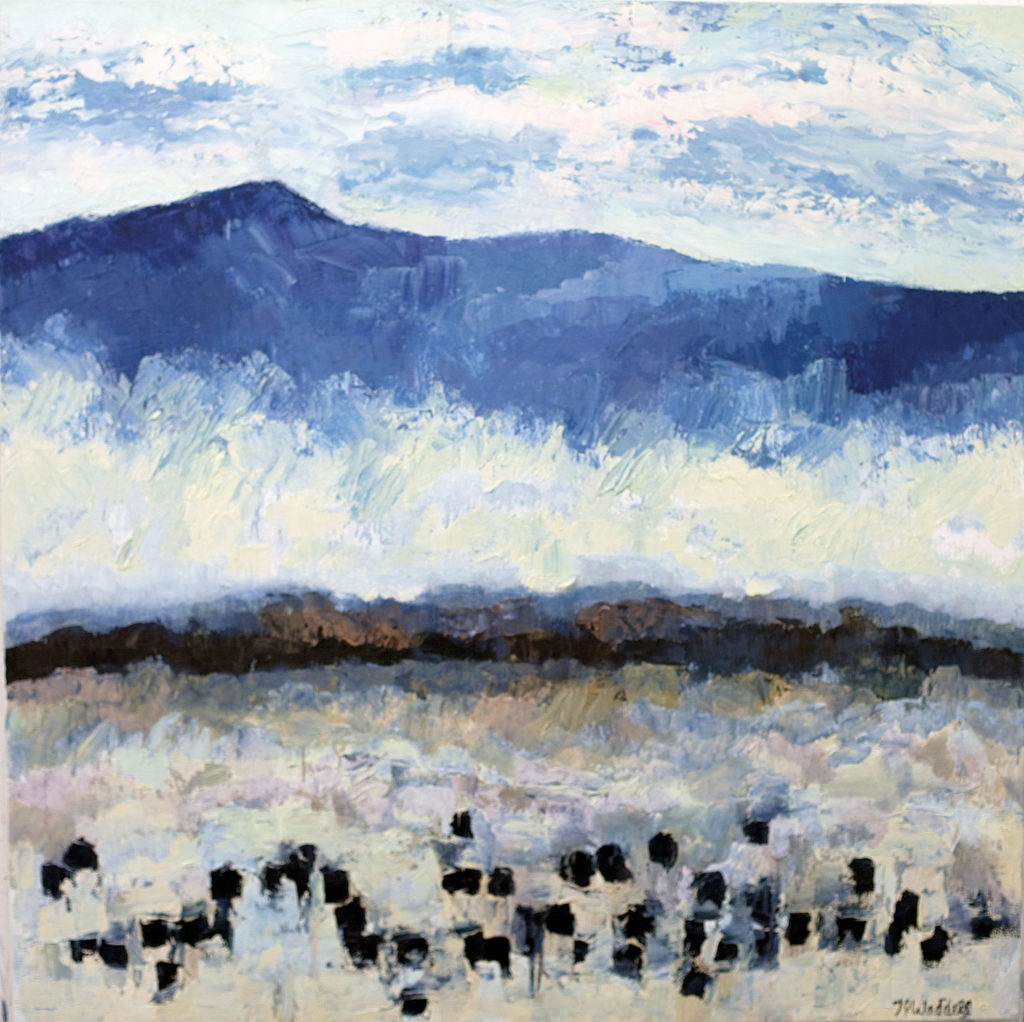 That childhood exposure made a deep impression. “I decided 60 years ago, after meeting Isabell Johnson, that I didn’t want to be alive and not make art,” Ted says. “I paint every day. I can’t do it like I used to, but I love what I do.” 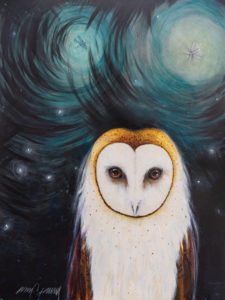 That impulse for making art seems to have rubbed off on Arin, though what drives her extends beyond art and comes out just as strongly in her devotion to civic engagement. She serves on several nonprofit boards, for example, including her local school board.

“Like my father, I’m a force to be reckoned with, but I’m not singularly focused on art like he is. I can’t be Ted, and he can’t be me,” she says. “We’re bonded by work — and when I say ‘work,’ I mean I used to drive the baler on the ranch.” That hands-on work ethic emerges in their respective artwork in different ways. “My work is nothing like my father’s,” Arin acknowledges, a fact that sometimes seems to shock critics and collectors more than it should. “Our personalities are often similar — we’re both very driven in our work — but we’re different people, so of course the work will be different.”

Her father is just as circumspect in his assessment of their artistic relationship. “We don’t often talk about art specifically,” Ted says. “When I look at her work or she looks at mine, we might offer a comment or two, but not in general. When artists get together, they don’t talk about art anyway, they discuss turpentine and pigments.” 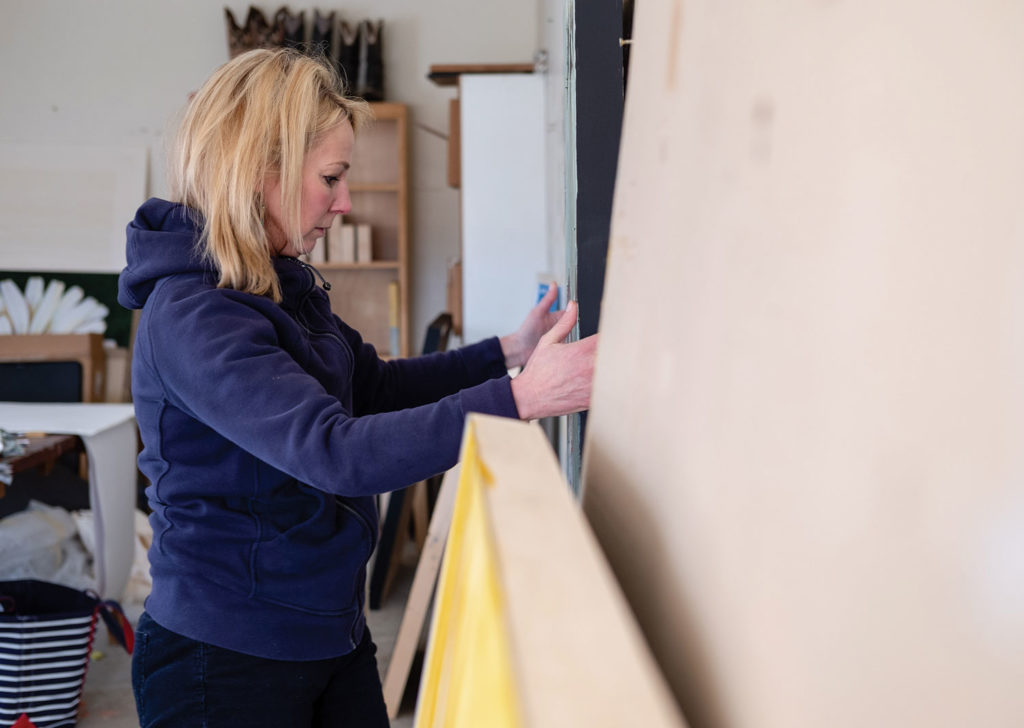 Arin Waddell at work in her studio in dayton, Wyoming

While the elder Waddell always provided opportunities for creating art when his daughters were growing up, he didn’t push. “When the kids were little, I was doing art all the time,” he says. “I made sure the materials were there for both Arin and Shanna. When I’d paint, they’d paint as well.”While it’s clear that he’s a proud father, he is quick to point out that Arin has become a respected artist in her own right. “Arin doesn’t need my advice,” Ted says. “I guess I’m more experienced in the business end of things, so maybe I’ve been some help in that regard. And we’ve become really good about sharing stories with each other. She really is one of the few fellow artists I talk to.” 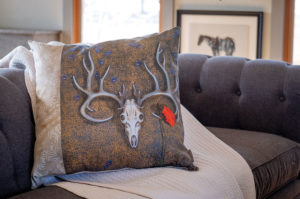 Arin Waddell’s “Art off the Wall” pillows are reproductions of her oil paintings on high-quality fabric. complementary fabric is integrated to preserve the proportions of the original painting.

Arin grew up near Molt, west of Billings, Montana, where the family moved after Ted quit teaching at the University of Montana. Her mother, Betty Whiting, was a well-respected psychology professor, and both parents had a reputation for being driven. “The combination of the two really formed the person that I am,” Arin remarks. “But whereas my sister and mother are both quiet, beautiful intellects, my father and I are both animated extroverts. I joke that I am the only son my father is ever going to get.”

Though her art takes a different approach thematically and stylistically, Arin deeply respects the trajectory of her father’s career. “Dad is a true Cinderella story. I admire him profoundly because he came from nothing and carved out this life with his bare knuckles. He taught me a sincere work ethic.” 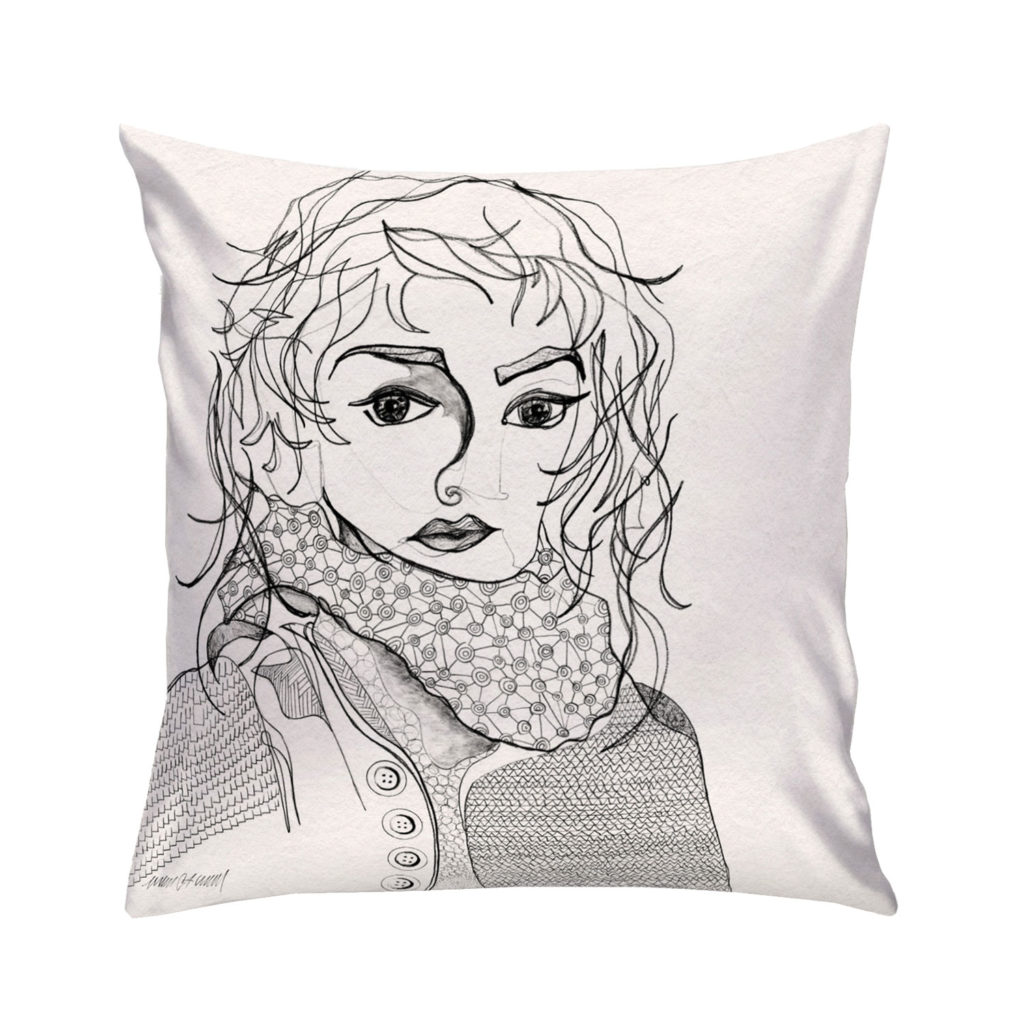 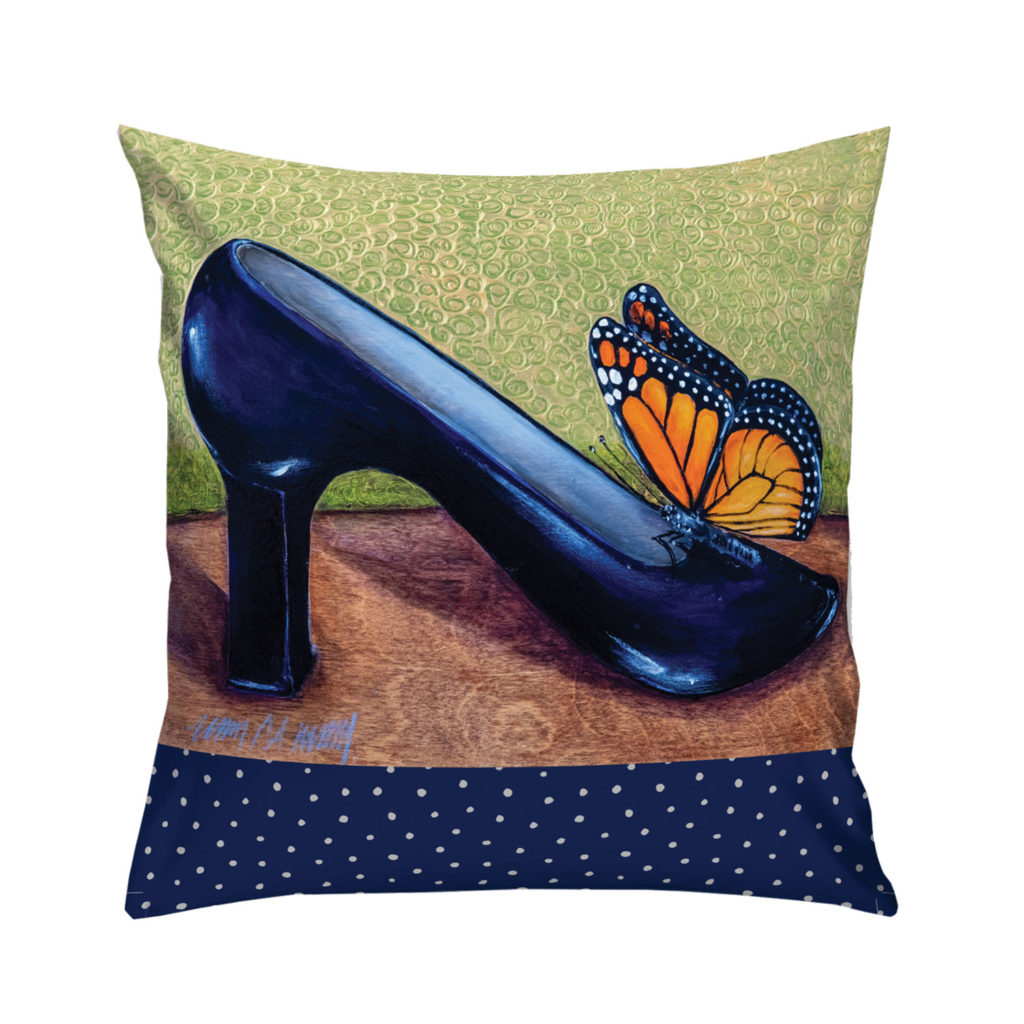 That kindred work ethic and similarly intense motivation are two qualities noticed by most people who know both the Waddells. Longtime family friend and fellow artist Corby Skinner, for example, zeros in on their intense dedication to creativity: “I know Arin, and I know Ted, and I know them both as indomitable, tenacious personalities. Nothing gets in the way of their creative spirits.” 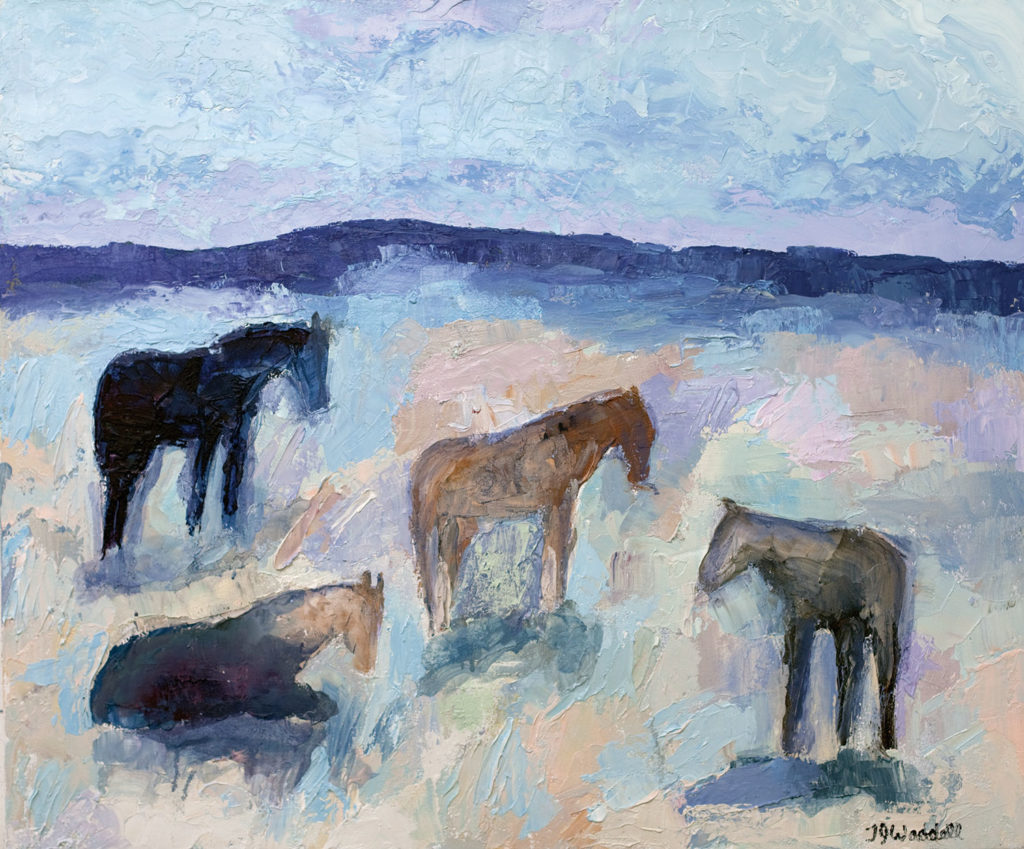 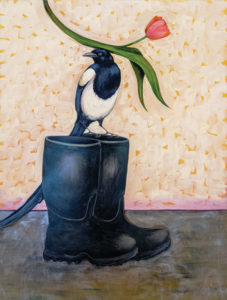 The father-daughter duo have a joint show at Visions West Gallery in Bozeman opening on August 9 and running through September 13, with a reception for the artists on August 16. Gallery owner Nikki Todd has worked with both artists, separately and together, for years. While she acknowledges that Arin’s style is quite different from Ted’s, she notes that they’ve made similar contributions to the art world itself. “Ted was a powerful voice for the ‘other side’ of contemporary art, beyond cowboy realism,” Todd notes. “He was one of the first to successfully break with that tradition in Western art. But Arin has sort of done the same thing for her generation in more of a post-conceptual way.”

The divergence in style is itself one of the key elements of the exhibit. “This show brings out the best in both of them,” Todd says. “So often, when children of established artists take up art, they work in the same style, but I admire that Arin took her own direction. She’s moved beyond being in the shadow of Ted.”

Their joint show reveals the tangible residue of their experience with Montana and the West. More importantly, the sense of ‘place’ that they both imbue in their work reflects the concrete realities of earth and animals, and the labor and joy of living among them. 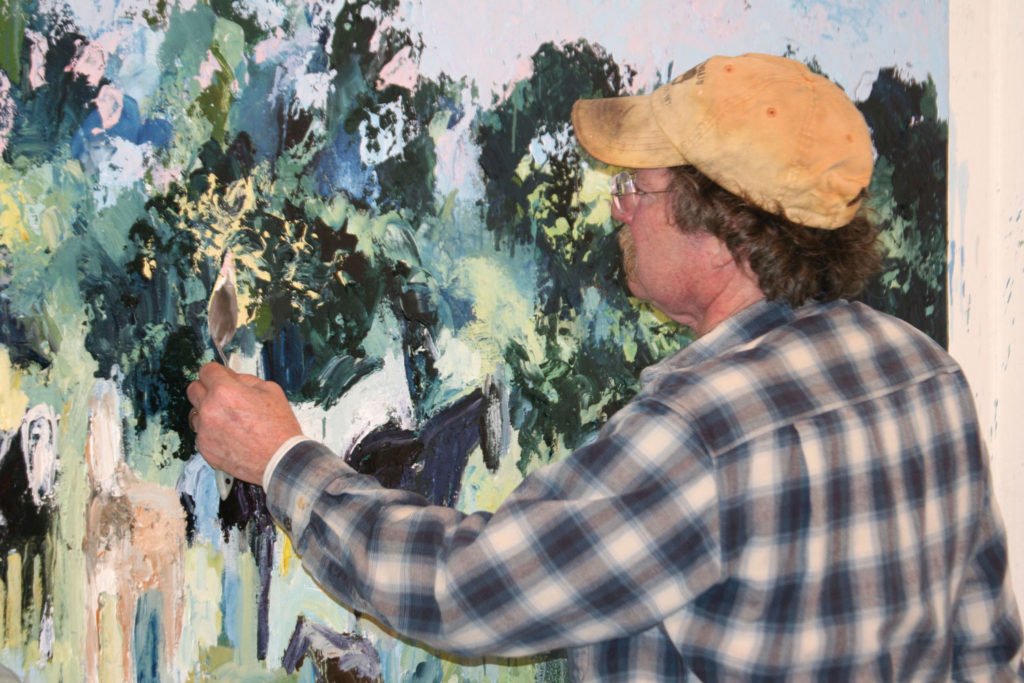 Ted Waddell at work in his studio.