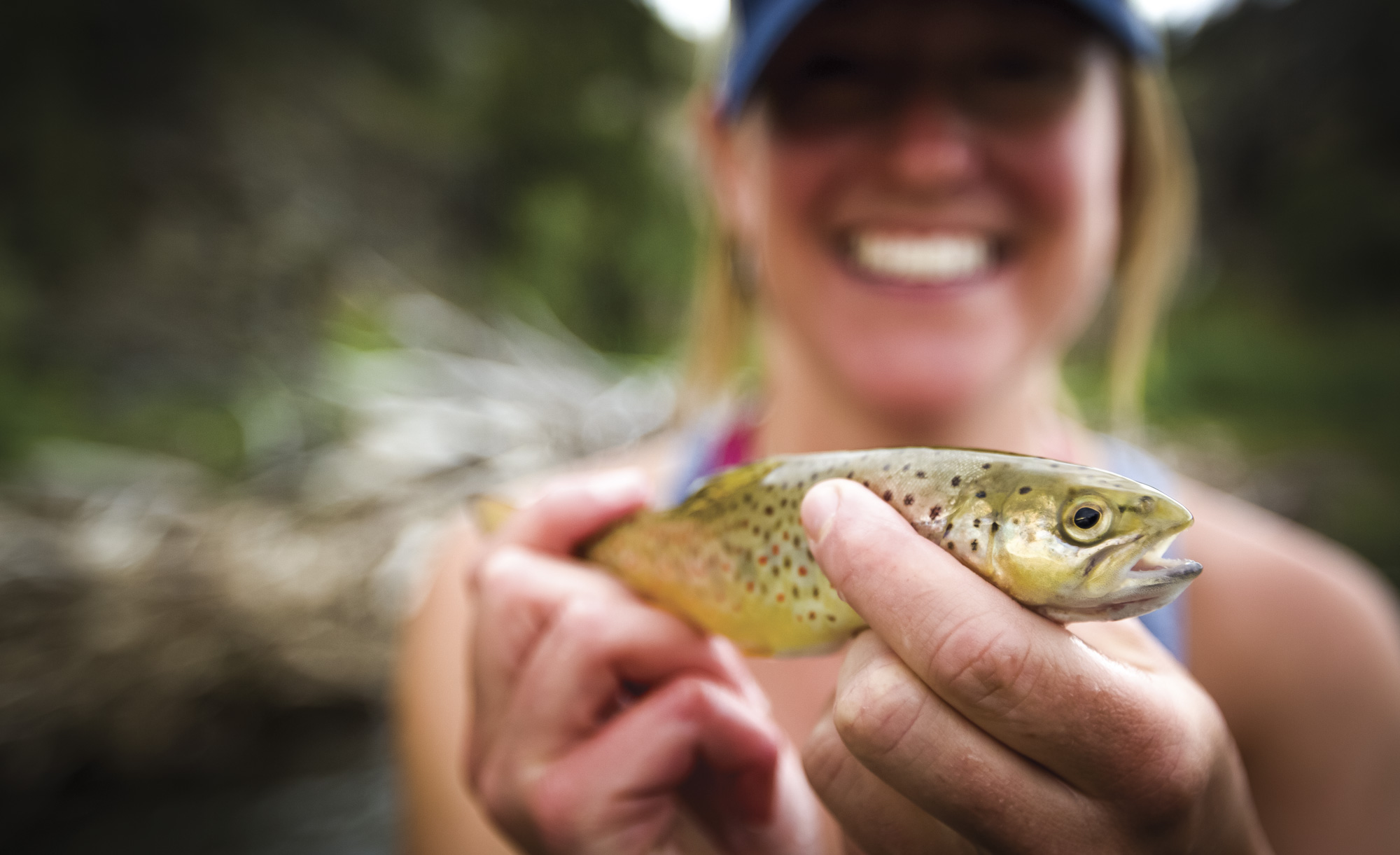 AFTER TWO YEARS OF FISHING the lower Bitterroot, I no longer expected to catch one of the big, beautiful rainbows for which the river was famous. I was ready to settle for small and ugly. I hoped desperately for reckless and ignorant. But as I stared hard at the river that day, I knew that even if a homely little fish waited naively for me on the other side, no way was I wading across there. Shallow riffles edged both banks, but a stiff current cruised between them, fast and snaky and suspiciously dark.

I sat down and pulled a thermos of green tea out of my pack. “You go ahead,” I told my husband. “I’ll stay over here and dial 911 for you.”

I filled my cup and watched a kingfisher nosedive off a dead cottonwood. Splat. It disappeared briefly under the surface of the water and then reappeared, beak empty. A minute later, another splat. Still nothing. I could relate.

Tony ignored me as he finished tying on his streamer. I suspected he was wearing down under the influence of tea and inertia. He’s cautious about river crossings, anyway — you have to be, if you’re a sinker. But he doesn’t surrender an argument easily, even if it’s one he wants to lose. He pointed at a deep hole downstream, just off the opposite bank. “Bet there’s some fish over there.”

“As if that will make any difference for me,” I said. We both knew I had a point. I had never caught a trout on this stretch of river. Not one.

“OK, let’s try crossing down in the braids.”

I dumped my tea and wished the kingfisher good luck as I reluctantly stood up and buckled on my pack. Of the two of us, I held out more hope for the bird. But on the positive side, at least I didn’t have to rely on the river as my source of food. If I did, it would be more effective for me to just eat the hatch and forget about matching it. I pondered that idea as I skirted a pile of flotsam and started to follow Tony downriver. Could I eat a grasshopper? Maybe fried crisp with a little chile and salt, like I saw in Ranger Rick magazine?

There I was, losing focus again. Maybe that was one of my problems. It wasn’t hard for me to stay engaged on the river’s upper reaches, where parts of it looked and fished like a creek — I actually hauled in enough fish to keep things interesting. But here I found too many distractions that didn’t involve catching anything. There were fewer trout this far downstream, and individual fish tended to be large and persnickety. Fishing was much tougher. And without the intermittent reinforcement of catching something, I sometimes forgot why I was carrying a fly rod. I climbed over beaver-felled trees, searched for tracks, and inspected piles of bear poo. I wasn’t a fly fisher, I was a naturalist, albeit one equipped with nippers and a highly unnecessary pair of forceps.

The river bank grew steeper and Tony stopped to prospect a pool with his streamer. I leapfrogged past him and sneaked out to the edge — fish-watching was another distraction for me, though it occasionally reawakened my desire to fish. I peered into a deep, spooky hole filled with the corpses of giant trees. Ten thousand baby whitefish milled about, flashing their silver scales and forked tails. In the next pool, shallow and sunny, a couple of huge suckers parked on the bottom, ignoring a monster crawdad. A few yards farther, beavers had dropped more cottonwoods into an apparent abyss, and I stayed well back from the edge as I studied the murk. A large, fishy shape materialized under a peeled log. My brain checked off the details — silhouette, tail, fin position. Then the shape swayed into the light for just a moment.

I backed up and hissed at Tony. “Get over here. Rainbow.”

I took another peek over the edge. The rainbow was still there. I could tell from its size that it wasn’t a beginner fish, more like an advanced-intermediate or even an expert. A trout didn’t get that big by making poor decisions. Unfortunately. I decided to let Tony have a go at it.

Too bad he didn’t hear me. He was working a pool carefully and methodically. I knew that anything less than a scream or a gunshot would probably fail to break his bubble of concentration. This fish was mine.

I retreated again, tied on a bead-head nymph and crimped a couple of split shot on the tippet — hey, bringing forceps wasn’t a total waste. Filled with anticipation, I hated to spoil the moment by actually casting. My casting skills were better suited to flinging dry flies on small streams, or possibly swatting yellow jackets at close range, and they deteriorated when I had to toss anything heavy. But I gave it a try. With the addition of split shot, my lightweight fly rod went soft and the line flew around my head like a lariat before the nymph fell with a plop, sinking right in front of the fish’s nose. All right, then. At least it was in the water.

The rainbow, predictably, simply eased toward the main current and faded into the deep green. I tried to retrieve the bead-head and snagged it in a tangle of submerged branches. One cast, one lost fish, one lost fly. I felt guilty about my bit of small-scale, unintentional littering.

We walked together and every once in a while I turned around to catch a view. For some reason, I still felt kind of lucky. The river corridor was undeniably pretty, with its mix of ponderosas and deciduous trees framing St. Mary’s Peak and the Bass Creek Crags. We could see the same mountains from our living room, but I felt like we had traveled many miles. At home, just 15 minutes away, I’d probably be trying to squeeze in a few loads of laundry …

We had reached a riparian intersection. Here the river split into two main forks. The year before, we had found a reasonable crossing to reach a hole on the other side. Tony had caught a nice brown, and I had almost caught, well, something. But this year’s high water had apparently done some remodeling, shoving up steep walls of gravel and scouring down the streambed. Even now in low water, we were left with a different world. The first channel, once a shin-deep slog, looked risky. The second channel, formerly an exciting tussle with fast, knee-high current, appeared life-threatening.

“Sometimes I wish we had a boat,” Tony said.

“You said the same thing about a hamster.”

“I was just talking. Guess we can’t cross here.”

We stayed river left and followed last year’s minor stream, speculating as to whether it would eventually take over the river. I took a woolly bugger out for swimming lessons in a few promising locations. Then I snagged it on an underwater stump — more littering. My husband, the sinker, fished from a log above another scary pool. I passed him and stopped to study the water. We had never walked this far north, and we were entering new territory.

Below the pool, the river widened, still holding a good current but shallower now — a casual wade. A small fish flipped at the junction of two braids. I sloshed out to an island and sat down, just watching. A cloud of tiny, pale insects fluttered over the surface of the water. Another fish jumped, then another. By the time I counted 10 or 12, I was snipping monofilament and scanning my fly selection. Now I wanted to fish.

It was a relief when I made my first cast. That was more like it — thistledown. My drift was OK. I made several more casts into what appeared to be a feeding frenzy. The fish ignored my pretty little purple haze, which was starting to look huge next to the real bugs.

“My fly’s too big,” I told Tony, who had waded over to watch the action. “Use the smallest one you have.” I was already preparing for disappointment. This was the first surface feeding I had witnessed all day. By the time I swapped out my fly, it might be over.

But Tony was much faster — one advantage of spending a disproportionate amount of his life fly fishing. He quickly replaced his fly with a pale morning dun and handed over the fly rod.

“Here, take mine. I’ll tie on another one for you.” What a guy. But I noticed something strange about the way he had rigged the rod, with a scrap of tippet maybe 18 inches long between the fly and leader. I held it up.

I had never fished that fly rod, an expensive colossus that spent most of its time on our bookcase. It was worthless on the creeks and likely to come to grief on the river. I didn’t want to be the one who tripped over it and turned it into a pricey recycling project. On my first cast, I said, “Wow.” What power.

With the scrubby tippet, my line kept getting bogged down, but I held the rod up like a cell phone tower to keep a natural-looking drift. And it worked. Two or three casts, and my fly disappeared in the mouth of a fish. I set the hook. Tony yelled. I yelled. “Finally!” I reeled it in.

The rainbow was small, about 8 or 10 inches, and not the prettiest fish, though I wouldn’t call it ugly. I couldn’t comment on its mental state. I held it gently and let it go with deep gratitude. And I kept fishing. Five minutes later, I caught another rainbow, my second fish. I had to use my actual forceps to remove the fly. Tony caught a fish too. And then it was time to leave.

On the hike back to the car, I ripped a 2-inch hole in my waders, but even a damp leg could not erase my smile.

The next week, I bought a new fly rod, just for the river. The laundry can wait.