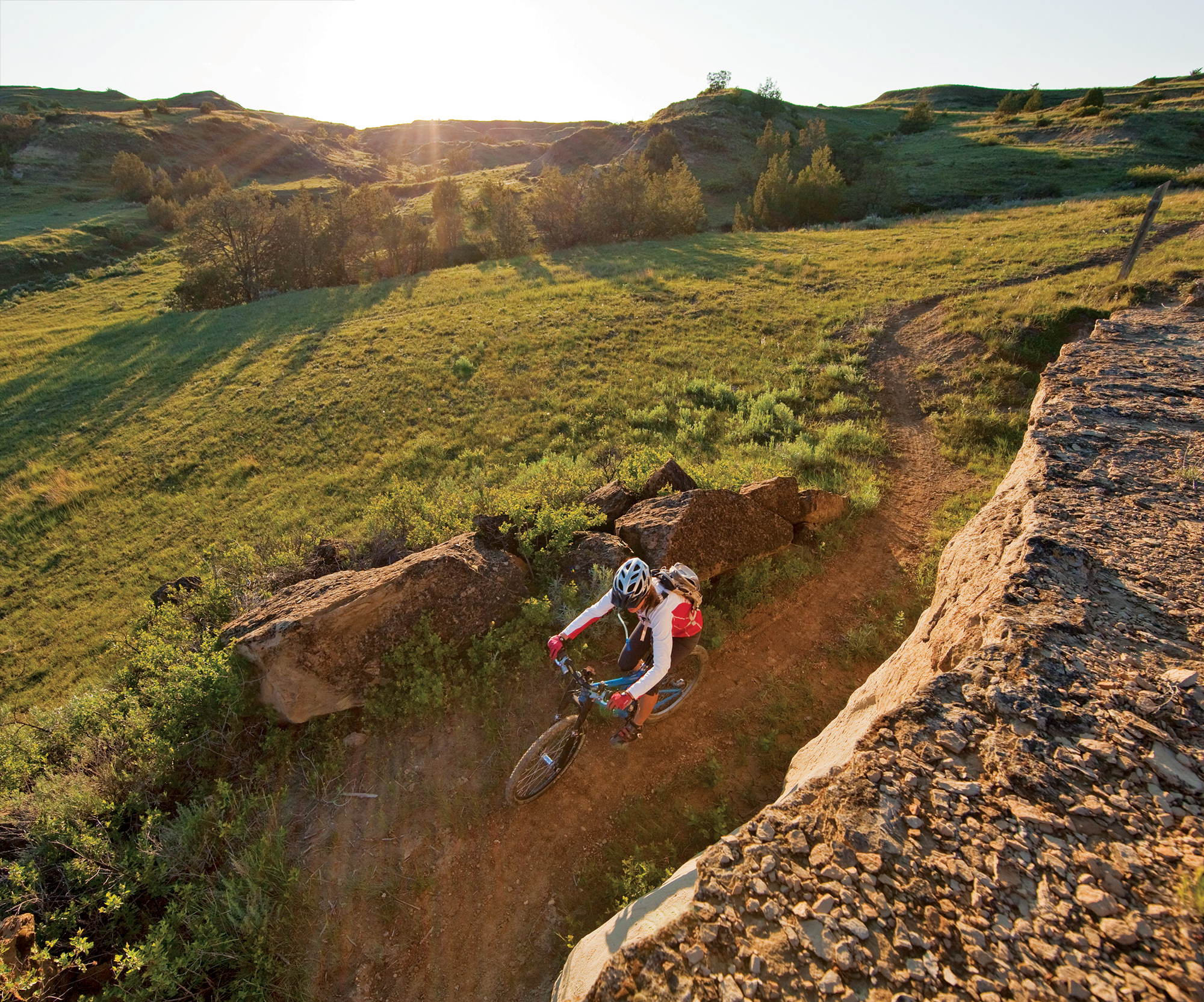 WE HAD BEEN PLANNING THIS TRIP FOR YEARS, but when it came down to it, success hinged on a handwritten phone number scrawled on a sticky note hanging in the window of a closed-for-the-season bike shop in Medora, North Dakota.

“If you need service ASAP, call …”

Early morning, late October, on a deserted side street in front of Dakota Cyclery. No one around. Yes, we needed service ASAP. I dialed.

Third ring, Jennifer picked up, her voice strong and cheerful, and in short order our trip fell into place.

It isn’t like we hadn’t done any planning. We had maps, we had talked with Forest Service people, we’d read blogs and heard from friends who had ridden some sections. We knew enough not to even think about riding if rain was in the forecast. The Maah Daah Hey Trail is notorious for wheel-clogging gumbo.

But it was almost the end of October. Bike shops in the area were closed for the season, shuttle services weren’t answering the phone. We had targeted a late-fall weekend, made the nine-hour drive from Bozeman, Montana, and figured we’d find a way. Which is where Jennifer came in.
Five minutes on the phone refined our itinerary, provided a shuttle, and gave us a realistic sense for our daily mileage. Bingo.

“Twenty miles is a pretty big day for most people,” she said. “Especially if you’re self-supported. There’s cell service on and off throughout the trail,” she added. “Climb a hill and give me a call a day or two in and we’ll figure out where to leave your car.”

An hour later, still midmorning, our bikes were loaded up at the Buffalo Gap Campground and trailhead, panniers freighted with gear and food for a self-contained four-day weekend, with warm October sun lighting the badland prairie.

The Maah Daah Hey is 100 miles of single-track challenge, starting on the outskirts of Medora at Sully Creek State Park, and winding north to the CCC Campground on the Little Missouri River (with trail-building projects underway to extend it, especially on the southern end where The Deuce Trail continues).

Through the pastel layers of badland topography, it parallels and crosses the Little Missouri River. Along the way the route arrows across tableland, drops into and climbs back out of coulees, passes thickets of petrified tree stumps, touches the ruins of Teddy Roosevelt’s historic Elkhorn Ranch, flirts with units of Teddy Roosevelt National Park, and weaves through a landscape transformed by the fracking frenzy of the Bakken oil field.
But it’s the ride that matters. All the rest fades away once we mount up and start following the turtle-symbol signs of the Maah Daah Hey.

At first we twist through some creek bottoms littered with fall leaves, but soon we emerge onto the tablelands, prairie and space with the dark stripe of trail ribboning into the distance. The riding feels free and airy. Filling the horizon, the gulf of space where the Little Missouri meanders north toward the Big Muddy, etched by currents and frost and wind into a fantastic palette of buttes and coulees and scarps. We get accustomed to the frequent spring-loaded gates that allow bikers and ranchers to keep things straight, and comment on our late-October luck with weather.

The first trail lunch is in the middle of this spacious tapestry, fall warmth allowing for shorts and T-shirts, the land curving off to the horizon, a sense of potential in the air. It had been an interesting weather year. Some hard rains late in the season washed out sections of trail, rutted others, and the landscape we found was still wetter than you’d expect for October.

Down a sloping descent, the first water hazard confronts us — a boggy low spot we tiptoe across from dry hump to dry hump, hauling the heavy bikes. Then off again, miles of prairie, a few cattle, the warm sun. Trail signs are reassuringly visible. The map is accurate. The afternoon settles into this mix of open riding, descents into draws and coulees, more water traps, a section or two of brain-scrambling, cow-track-pocked earth. But then, late in the afternoon, we hit a sweet section of rimrock descent, in and out of juniper and aspen, the low light coloring the arid land orange, and that lovely charge of clatter and quiet and the breeze of speed — control and risk, heady and heartfelt.
One final water crossing — a thigh-deep, muddy gully and a grunting heave to get the bike up the far bank. Then a short climb into the first camp at Wannagan Campground, 18 miles along, perched below a rim of rock promising the morning’s first climbing challenge.

“Jennifer was right,” I say to Marypat, “20 miles is a pretty good stint on this trail.”

The days blend into a kaleidoscope of images and emotions: Marypat perched on top of a petrified stump; the brief slog across the calf-deep Little Missouri; rustling cottonwood bottoms along the valley floor; the ruins and moody sentiments of Teddy Roosevelt’s ranch, where he came for solace and a dose of frontier after the deaths of his mother and wife in 1884. Oil in the air, pump jacks thumping in the distance, the silhouettes of tanks on the horizon, the mixed blessing of well-maintained dirt roads.

We relax each night at campgrounds with water and picnic tables. Each day the miles feature heart-pumping climbs, exhilarating descents, stream crossings, high plateaus with horizon-to-horizon views, aisles of sun and shadow through aspen groves, more cow-pocked ground and islands of stunning quiet.

Somewhere I climb a hill and get a couple of bars on the cellphone. I dial Jennifer again. We agree on a spot to leave the car, she highlights a not-to-miss stretch of trail, and the only flat tire we get the entire trip ambushes me the next afternoon within 100 yards of the car — a reminder that, on this trip particularly, it’s all about timing. 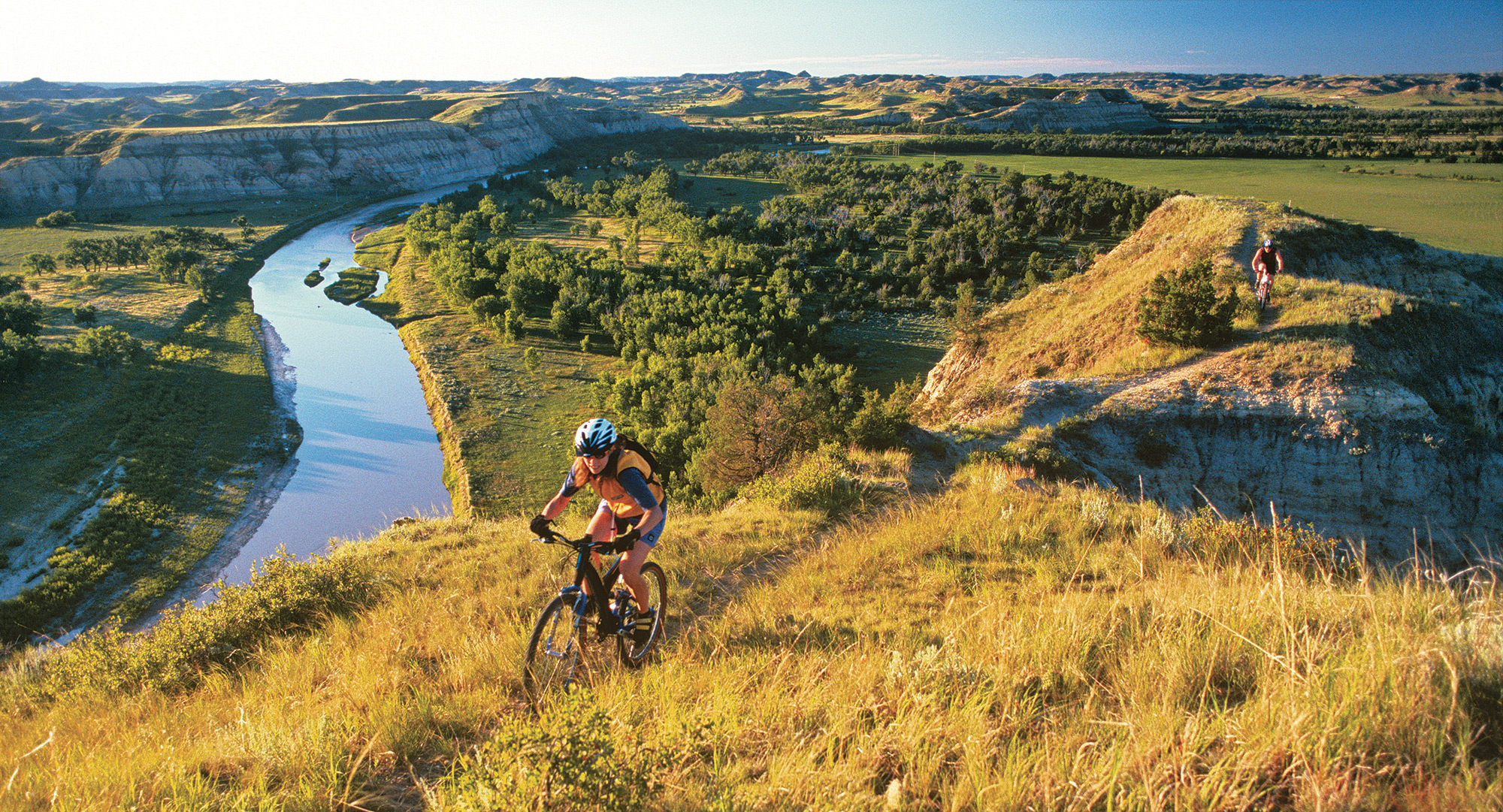 The Little Missouri River winds its way in the bottomland, while riders crest on a single-track above it. Photo by Chuck Haney 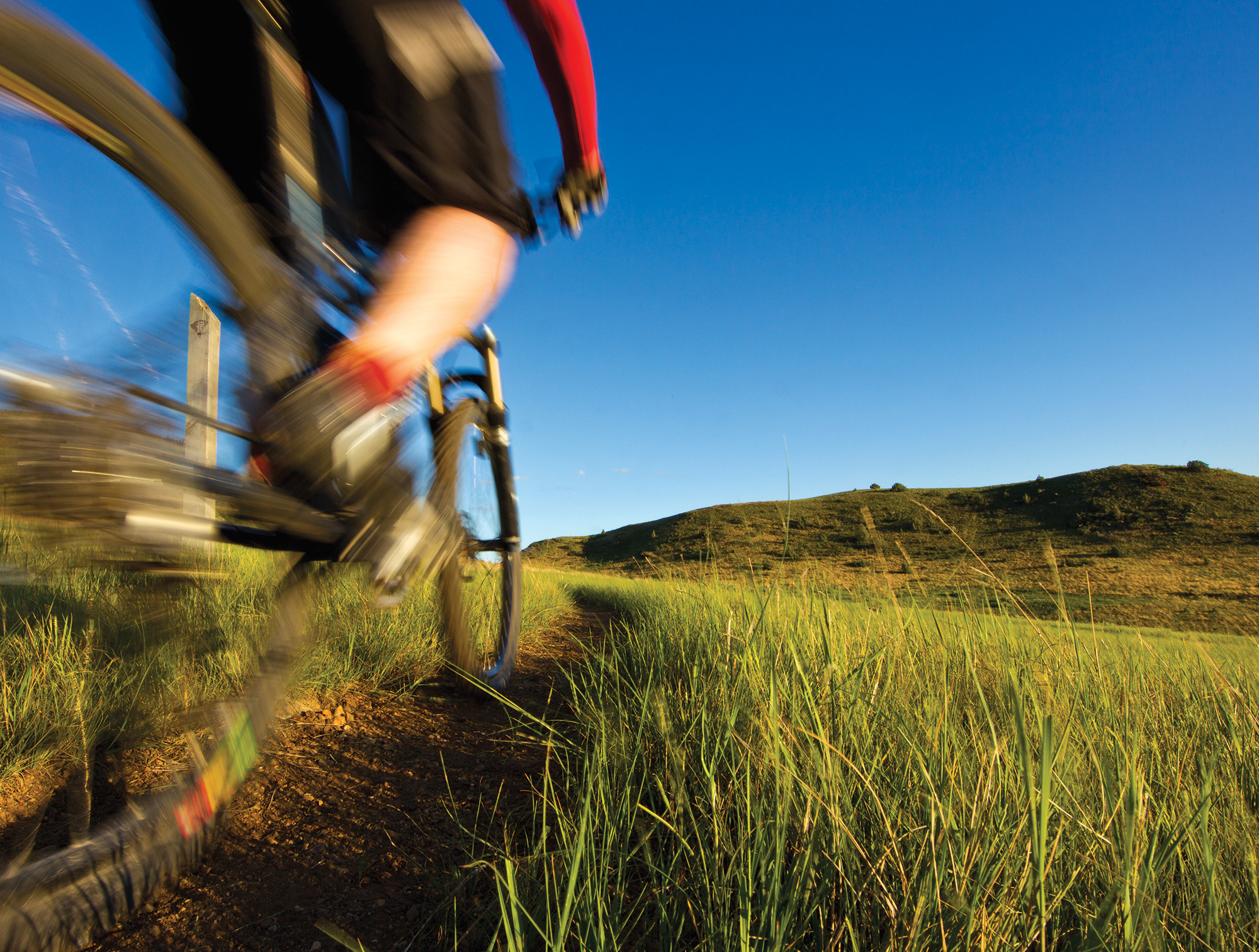 The Maah Daah Hey Trail offers a mix of shortgrass prairie and undulating hills over the course of 100 miles. Photo by Chuck Haney 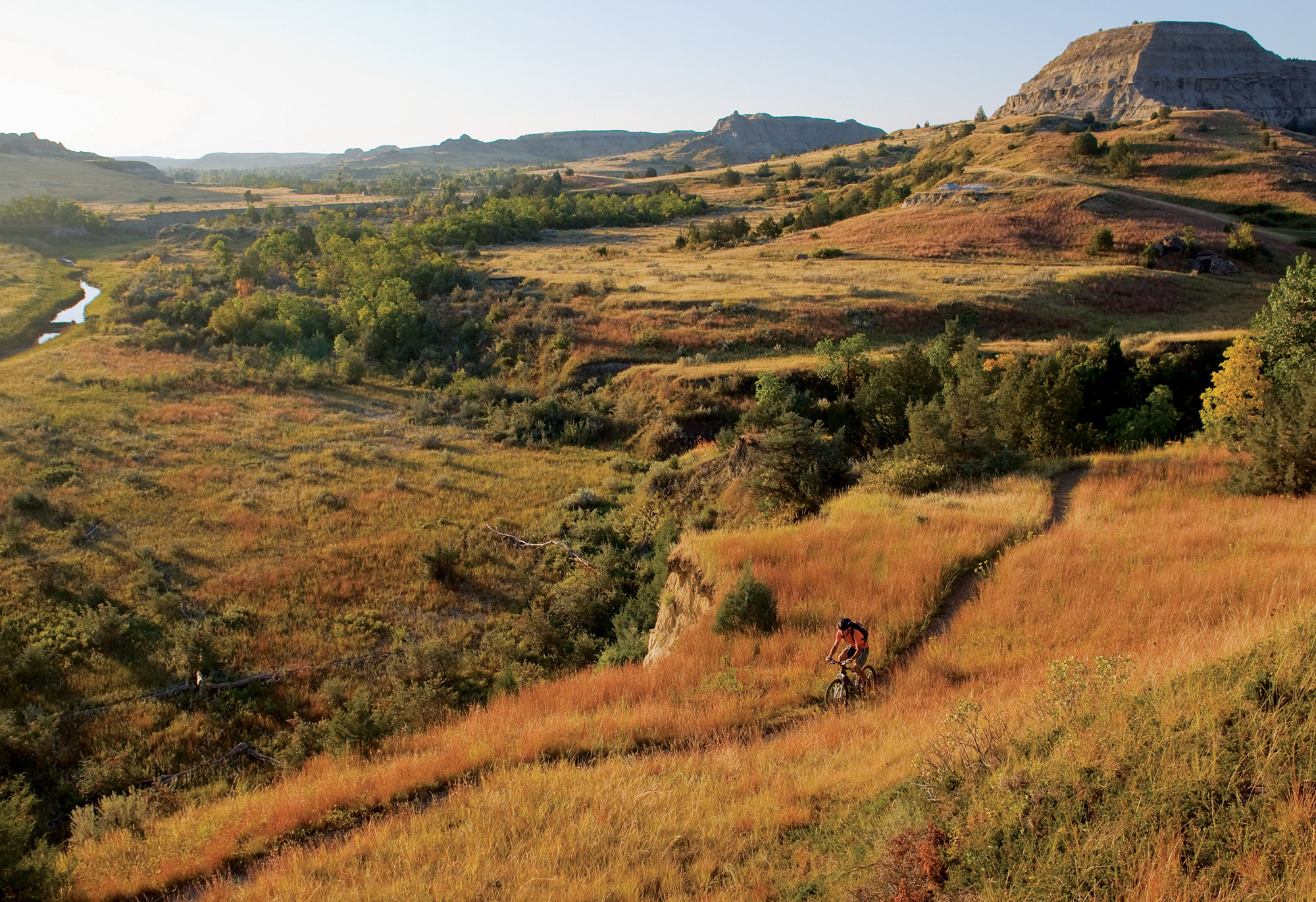 The author and his partner, Marypat Zitzer, take a break during their October ride. 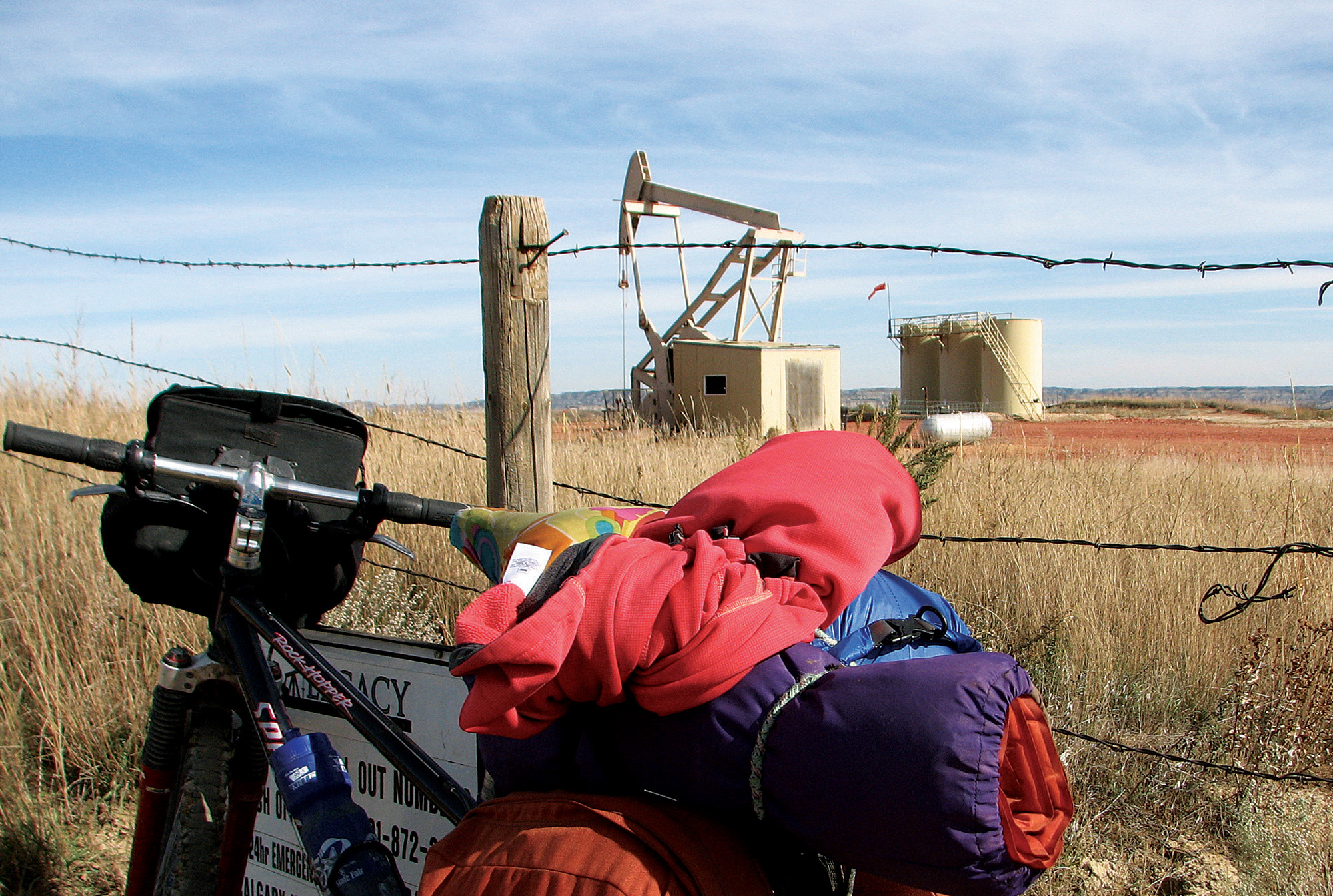 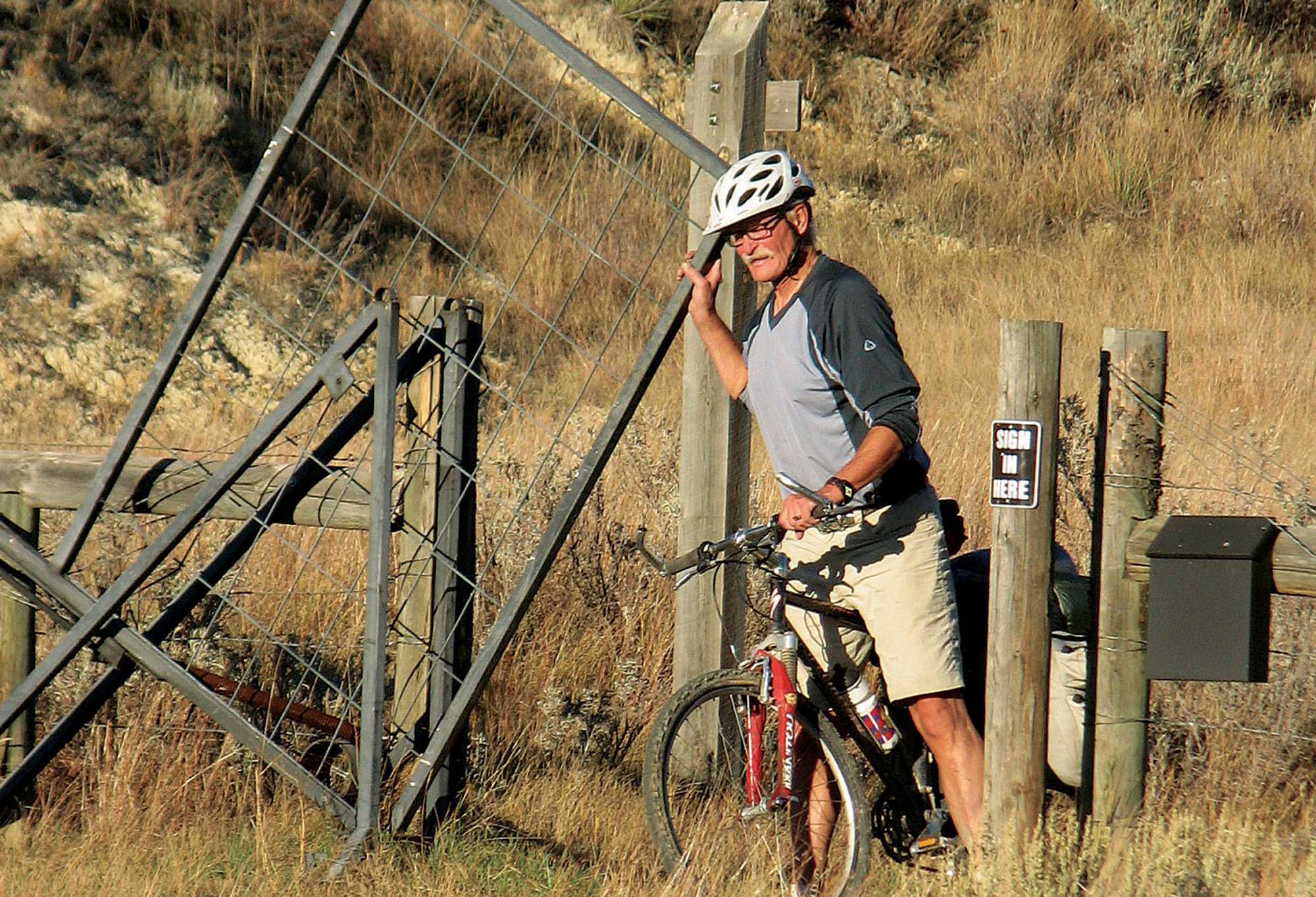 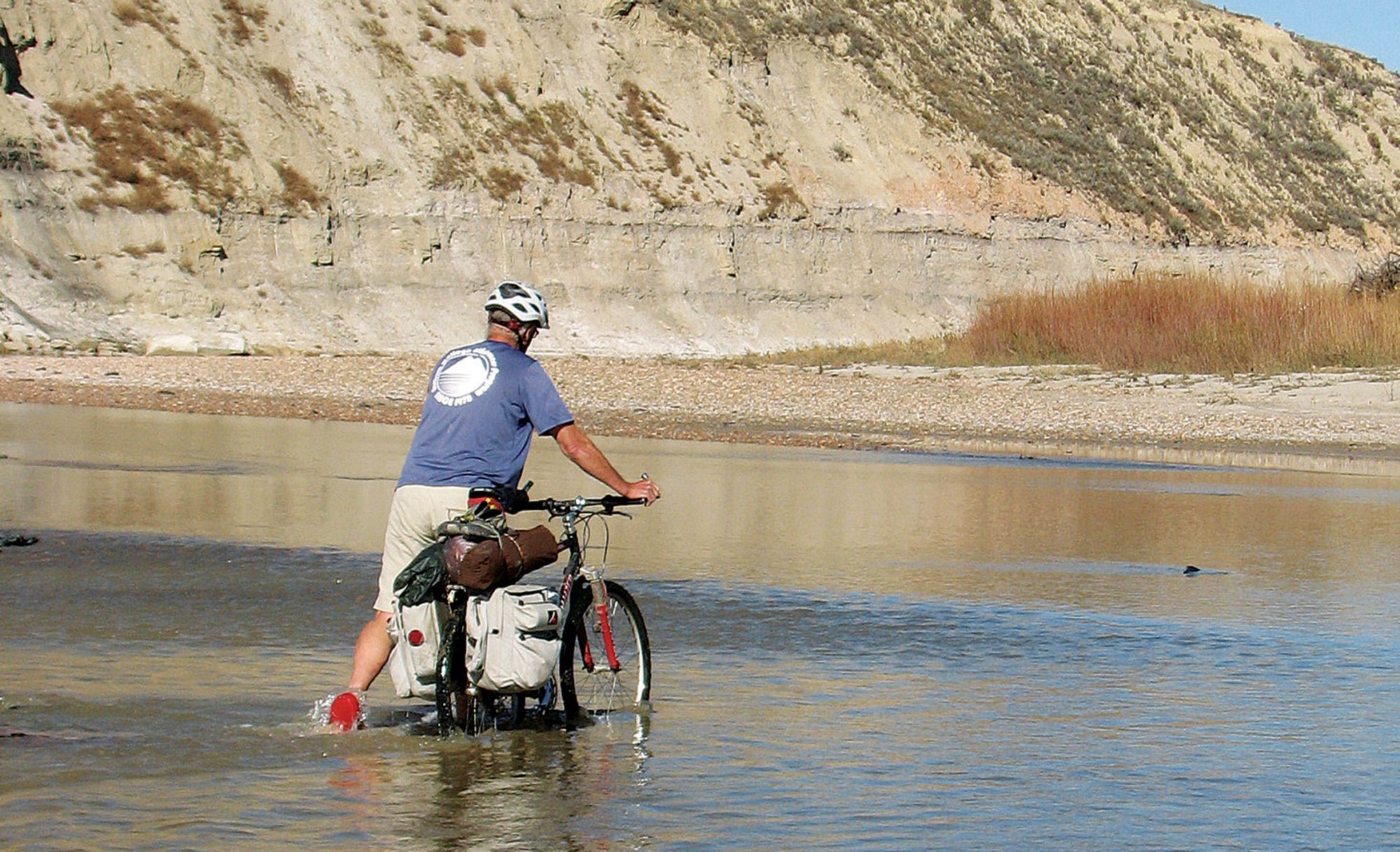