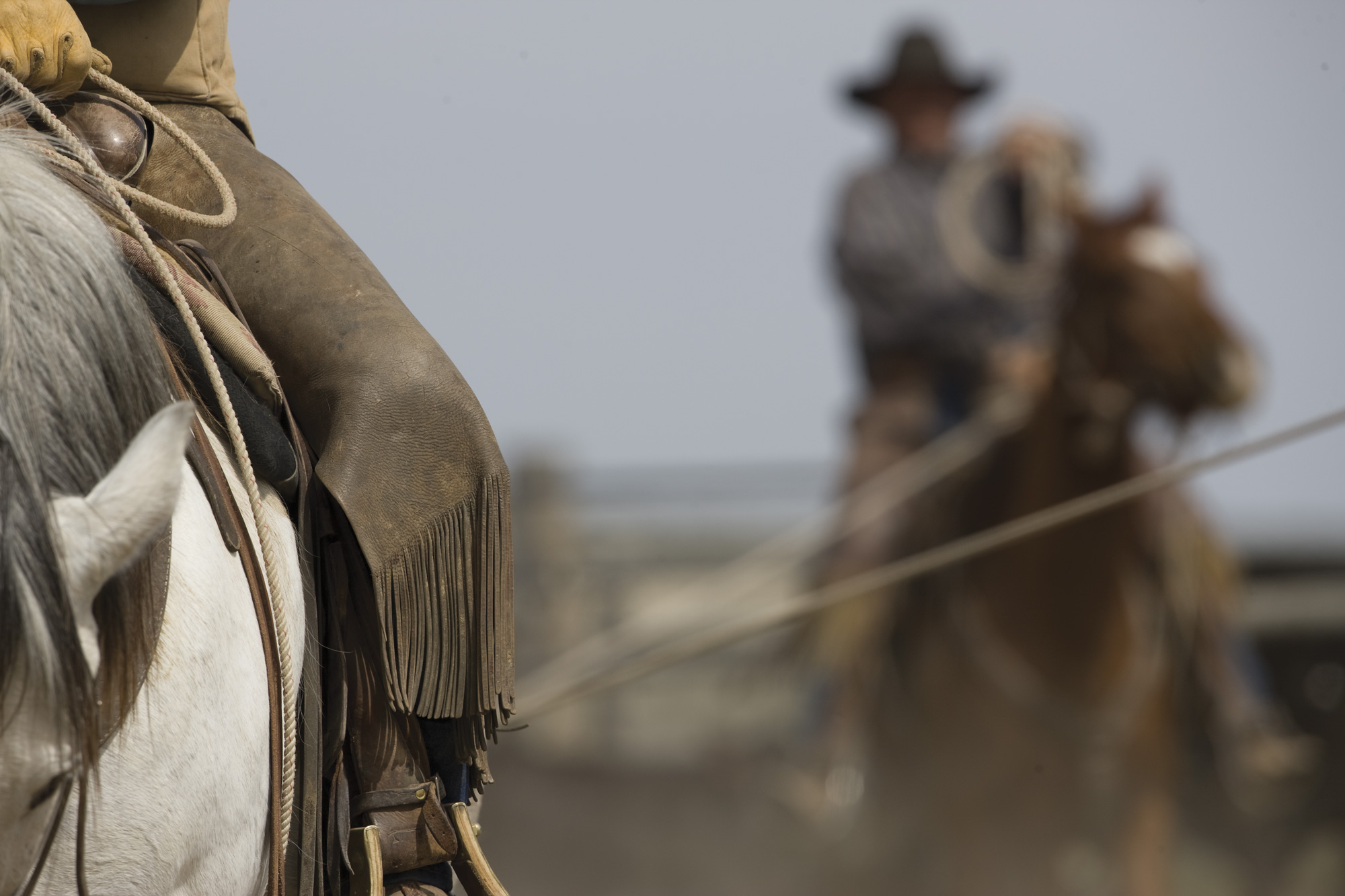 WE ARE CHUGGING ALONG THE GREEN MIDDLE FORK OF THE FLATHEAD RIVER, rumbling past chiseled rock toward the Continental Divide, eastbound on Amtrak’s Empire Building from Whitefish, Mont., to Williston, N.D., an 11-hour journey to ranch country.

Old rusted cars, ramshackle trailers, farms, farms and more farms, cattle and calves pass before our eyes. We count grain silos, hay bales, horses and sheep. Cattle are everywhere we look, black dots amidst the beautiful patterns and lines of the fields, too many to count. In Montana and North Dakota, there are nearly four times as many cattle as people and nearly 80 percent of the total land is used for farming and ranching.

Through the imperfections of the large glass windows, the landscape appears to ripple, like waves of heat on a summer afternoon. It feels as if we are going back in time.

Our neighbors Kevin and Penny Keegan have invited me, my wife and son to join their extended family to help with the spring cattle branding. Kevin drives us through a maze of smooth red roads spread across hundreds of thousands of acres, graveled with scoria — a flat, chipped shale. The red road is striking next to the short, green pastures and eroded pyramid formations, remnants of an ancient glacial lake.

“Everybody helps everybody out here,” Kevin says as he explains the various families and how they move from ranch to ranch. “It looks disorganized at first, but it’s a finely oiled machine.”

We pass old homesteads slumping back to the land, and a one-room school house, now closed for lack of children and used as a hunting lodge. Hundreds of calves have been born this spring. The brand, plus the inoculations, protects them — and the ranchers from losing their livelihood. Out here, as the saying goes, you “Trust your neighbors, but brand your stock.”

Paintings in Egyptian tombs document branding around 2700 B.C. While sophisticated electronic identification systems may someday replace the hot iron, most ranchers use the visible brand as a permanent mark of ownership and deterrent to theft.

When we arrive at Cy and Kami Crighton’s trailer home near sunset, Kami is in the kitchen, cooking. Penny’s son Cy has just returned from a year-long tour of duty in Iraq. A hard worker, he has hardly been sleeping as he prepares for the week-long branding with his father Ronnie. These days, many sons leave home in search of a better life, but Cy is back after his five years in the military.

Duff, a hired hand, is outside in the barn making branding irons with Cy and we say a quick hello. The language of the ranch, I quickly learn, is mostly unspoken. Introductions are a first name and then an emphasis on the last name. Nods and gestures, quiet looks and powerful smiles.

Massive bulls with large ear tags watch us as Cy walks us to the stables to help my son feed a young calf who has lost her mother. Inside the stable, the powerful jaws of the calf suck thirstily at the nipple of the bottle, nearly pulling it from 4-year-old Ethan’s hands.

The whole time I am at the Crighton Ranch, I am never quite certain how large it actually is, receiving some vague acreage estimates and shrugs of the shoulders when I ask. I only later learn that it’s a faux pas — you never ask a rancher how much land they have. It suffices to say that it’s big.

Ronnie’s brother David Lee and his wife Nancy have welcomed us into their home like we are relatives. We awake early and eat biscuits and gravy as Nancy dances around the kitchen, preparing enormous amounts of food. David Lee has been in the fields for hours, helping round up the calves.

Kevin and Penny drive us to a wide field, scattered with pickup trucks and horse trailers, hot irons in a pit fire. A large, circular pen contains the young calves, where ropers snag the hind legs with a lasso, spin the horse and drag them toward the wrestlers — men and women who flip the calf in pairs, drag it to a safe spot, and pin it to the ground by each pulling on opposite hind and front legs while the hot brand is applied by a third person. Then it’s ear tags, shots, and fly repellent, in tandem with up to four other groups.

For the young males, a quick slice of the furry sac and two oval testicles are removed and tossed into bloody buckets. Calves are marked with colors after each shot and then spun around, back to their feet, off to find their moms. The mama cows outside the pen are nervous, worried and skittish, some foaming at the mouth and all mooing loudly as their babies wait in huddled groups.

We watch, amazed at the theater, the outfits, the choreography of the routine, the leathery skin, the big smiles, the hard work. For now, we are outsiders looking at a stage.

When the calves are branded, they let out a sound seemingly of protest, but not of pain. With such experienced hands, the calves are only on the ground a matter of minutes, important for the health and stress on the calf. The smell of burnt flesh and hair permeates the air. Cy sees us and walks with Ethan into the fray, carefully sitting him on his lap as he holds a young calf. Lyndsay is next, and Cy takes her into the wrestling line. Other than her GORE-TEX jacket, she looks like an old ranch pro. Then there’s only me.

I am clumsy and scared, but I jump in with a surge of adrenaline. Flip it. Drag it. Pull back the top leg. Right leg pushes out. Left foot beneath the tail. Smoke wafts over me as the calf starts to kick and I think I might lose it. But I drag it around and release it.

I feel like I’ve passed some sort of test. And the ritual continues.

Someone gets kicked in the face and is bleeding. A calf gets lose. The unspoken language around me continues — hardly anyone talks, just motioning and moving as the mother cows continue to wail.

“I don’t know how they do it, but every calf knows their mother’s beller,” says Alan Sims, David Lee’s brother-in-law. “They’re not mad, just hollerin’ for their calf.”

Brands are their own language, composed of capital letters, numerals, characters (like a slash, half-circle, cross, or a bar) and many combinations. Letters and numbers can be used upright or “lazy,” connected or combined, reversed or hanging.

The Crighton’s main brand OT (“OT Bar”) is seared into the right rib. A second brand they use is a V with a lazy T on its side — on the left rib. A third is an open C on the hip. The brands are registered with the brand inspection office and stay with the bill of sale when the calves are sold.

After the first group is done, a few moments of rest are in order. There are 26 cases of beer in a huge cooler and cans are tossed around the field as the language of branding turns to the talk of celebration. Snow begins to lightly drift from the sky, but there are no complaints, just a new sense of urgency since brands don’t work if the calves are too slick. The ranchers quickly pack up like a carnival circus and within the hour have unpacked and set back up in new location with a new group of calves.

Carhartt jackets have now morphed into yellow rain slickers and the snow is moving sideways. After the last calf has been marked, the group retreats to the old one-room school house to celebrate — and eat.

Inside, the school begins to smell like a barn and it is loud, with laughter bouncing around the walls. The ranchers drink whiskey and eat barbecue while telling jokes and talking about plans for tomorrow.

At sunup, Cy is on the phone calling around to get riders for an afternoon branding and by midday, we’re back in the field. I’m back on the sidelines again, wary of interfering, unsure of my wrestling skills. Ronnie stands next to me, dusting off his chaps. He turns to me with a wry smile. “Why aren’t you in there wrestling?”

It’s more suggestion than question. Do I have what it takes?

I get into the line-up, feeling nervous as a roper drags a calf toward me. I jump into the pen, but I’m all screwed up. Someone is yelling, “You gotta flip him!” We get the calf to the ground and I’m on its head this time, but I have the wrong knee on its neck and am scared that the calf will break loose. But I get through it without losing her.

Heart racing, I get back in line and wrestle more calves, improving my techniques at each step until I finally need a rest. I have blood splattered on my arm, grass and dirt on my knees, and feel, for just a second, like a real rancher.

When the pen is finally empty, the women cook burgers, spoon up baked beans, with brownies for dessert. Everyone sits on the ground, drinking beer, soaking in the afternoon sun.

That night, outside Ronnie’s house, I sit with Duff and he tells me he’s reading Dante — The Divine Comedy — devouring the 14,000 line epic poem. On the surface the poem describes Dante’s travels through Hell, Purgatory and Heaven, but at a deeper level it represents allegorically the soul’s journey toward God.

I ask whether he is ever lonely out here in this big country.

“Sure, the isolation,” he says between sips of a beer and a drag off a cigarette. “I struggle with that sometimes.”

I’ve only tasted a small slice of the ranch, but working this land seems so hard, you could only do it if you really loved it. With a group of people who love it.

Earlier in the day, back out in the fields when Alan Simms was telling me how a calf can recognize its mom’s call, he had taken me up above the hollow in his pickup to get a better view of the 20-odd families helping each other in this timeless ritual. He spread his arms out to the land and the people working together below us.

“It’s a way of life,” he said. “I wish I had the words to tell you the value of what real neighbors are. People on the outside can’t have a sense for what a neighbor is. It doesn’t matter what you need. Fixing equipment. Stringing a piece of fence. Your neighbor is there.”

Here in ranch country, like the tumbleweed, that’s the way things roll. Next week, and for many weeks to come, the Crighton family will move on to the next ranch and repay the favor, marking their cattle, helping their friends.

Editor’s Note: Many family-run Montana ranches offer opportunities for the public to participate in authentic experiences in Big Sky Country. For more information go to www.montanaworkingranches.com. 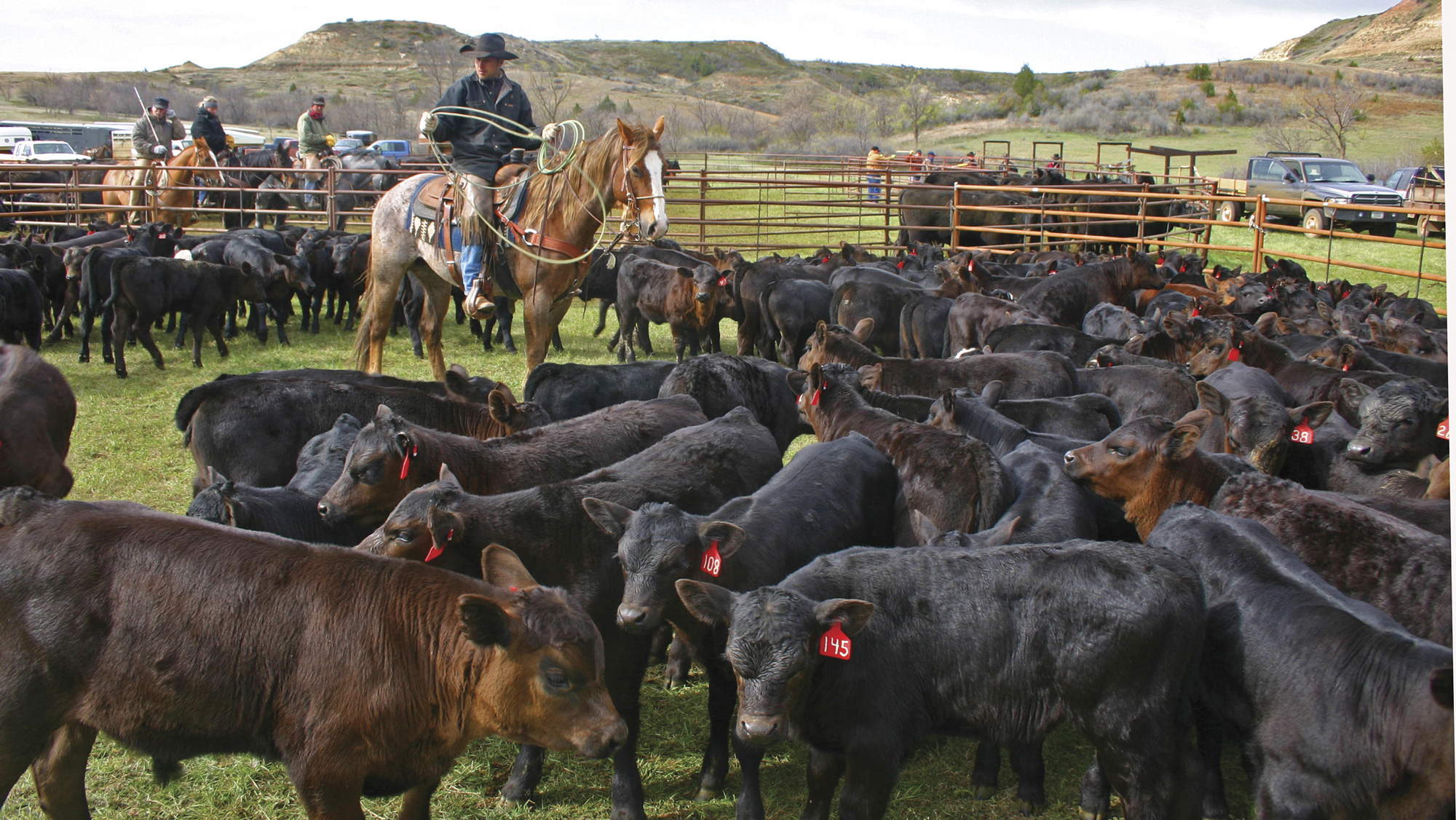 A large, circular pen contains the young calves, where ropers snag the hind legs with a lasso, spin the horse and drag them toward the wrestlers getting ready. 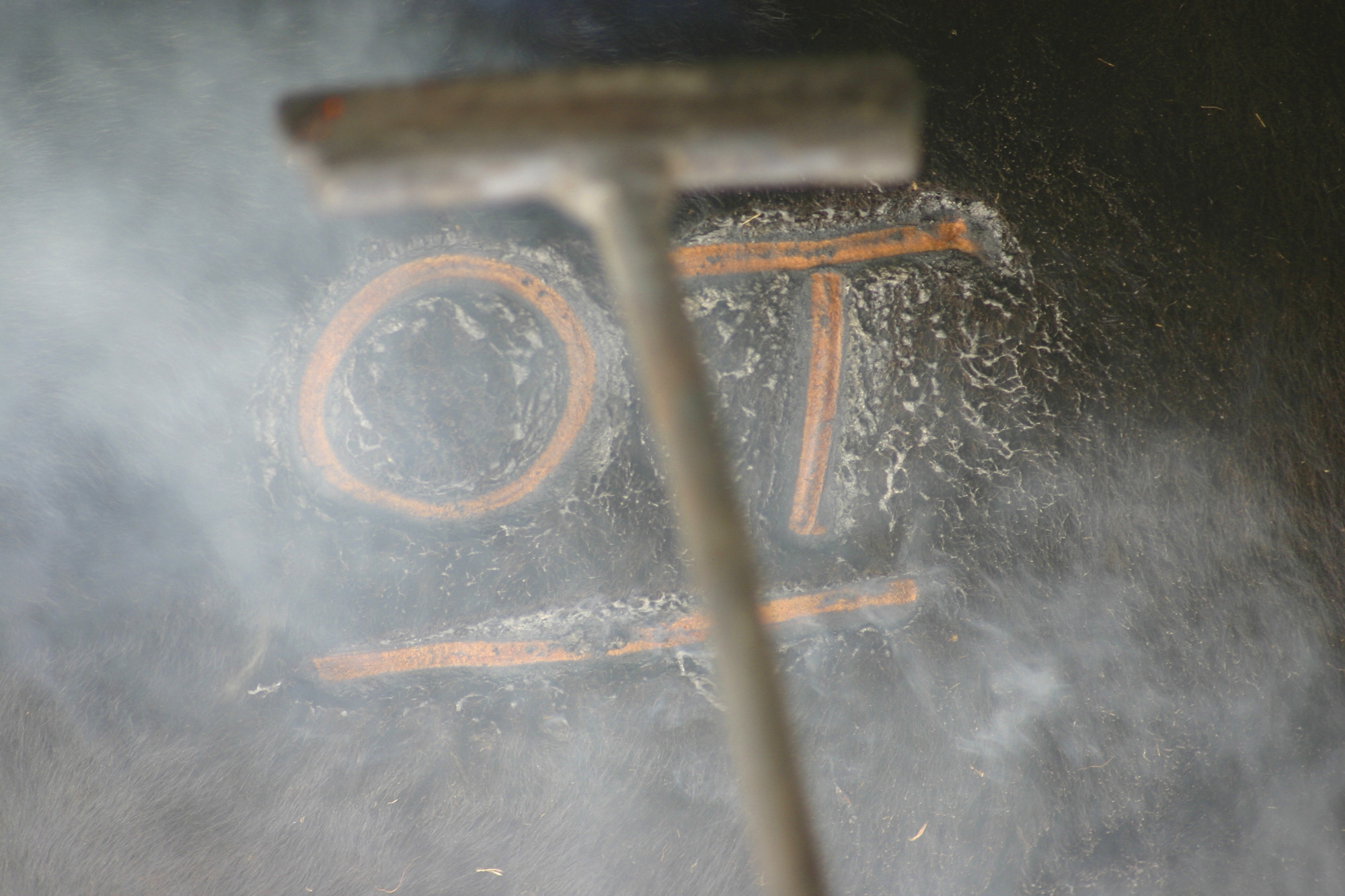 The Crighton’s main brand —OT is seared into the right rib. 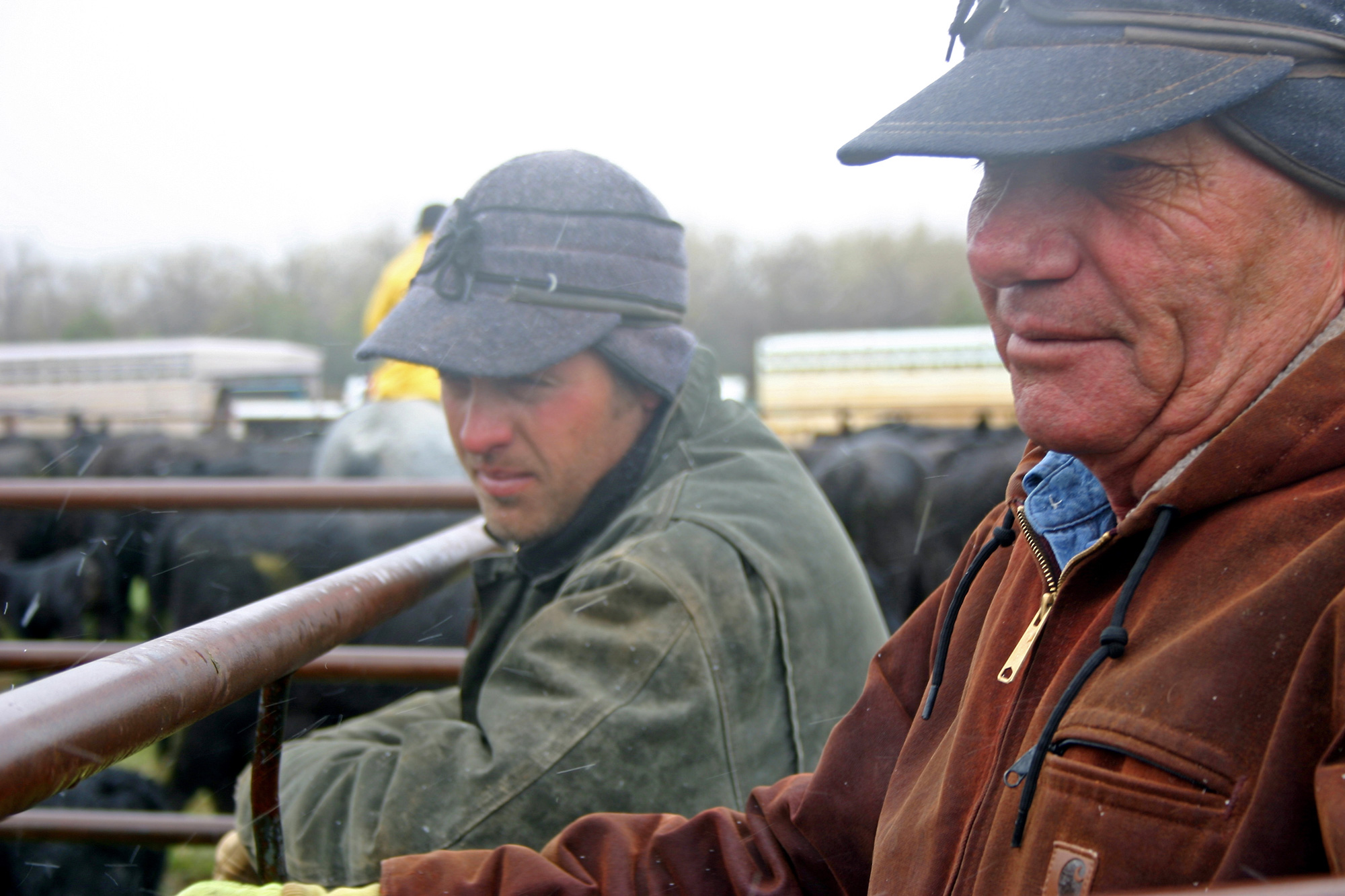 Generations of ranch families are proud of their stewardship of the livestock and treat the branding process with the utmost respect. 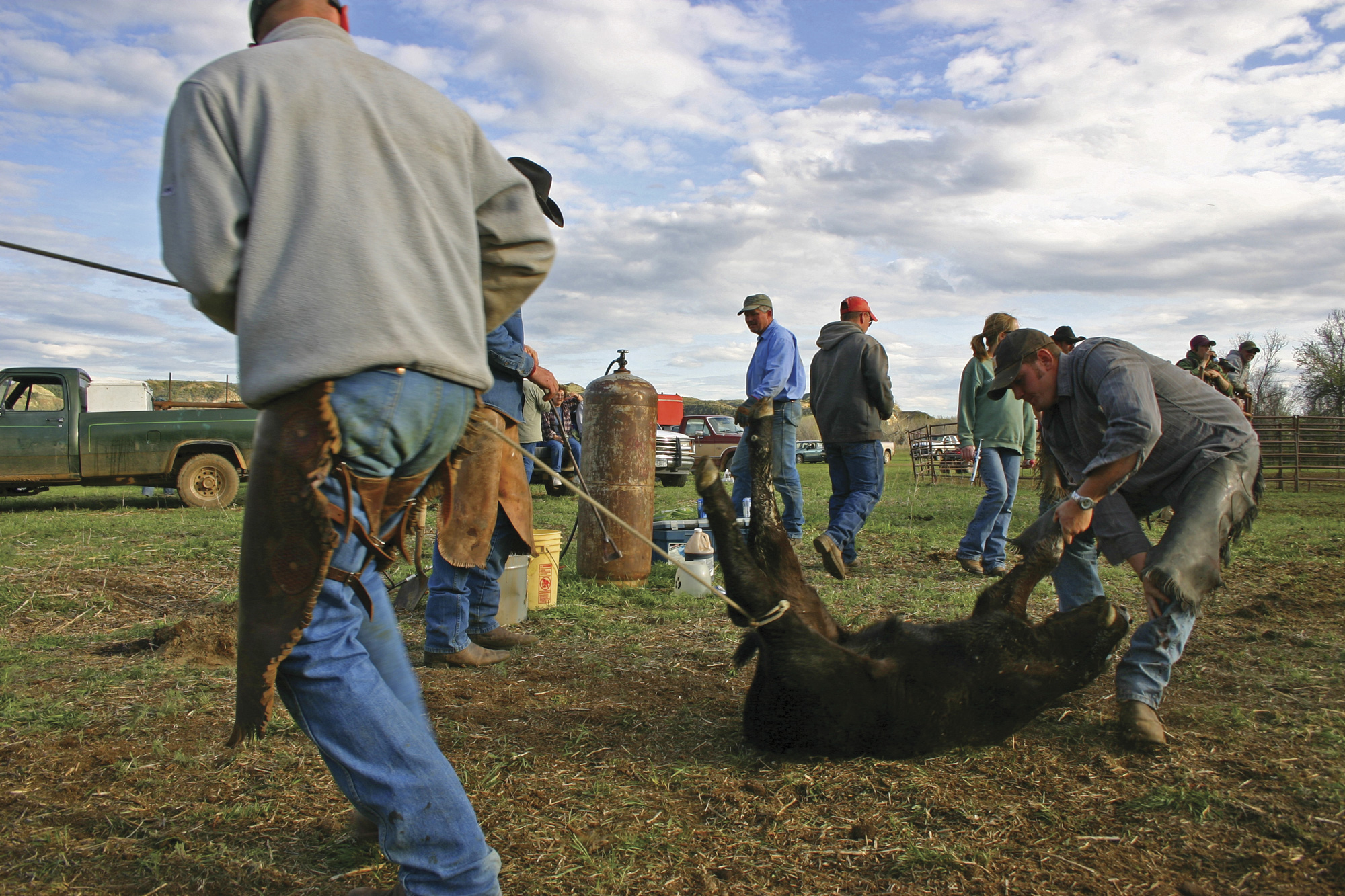