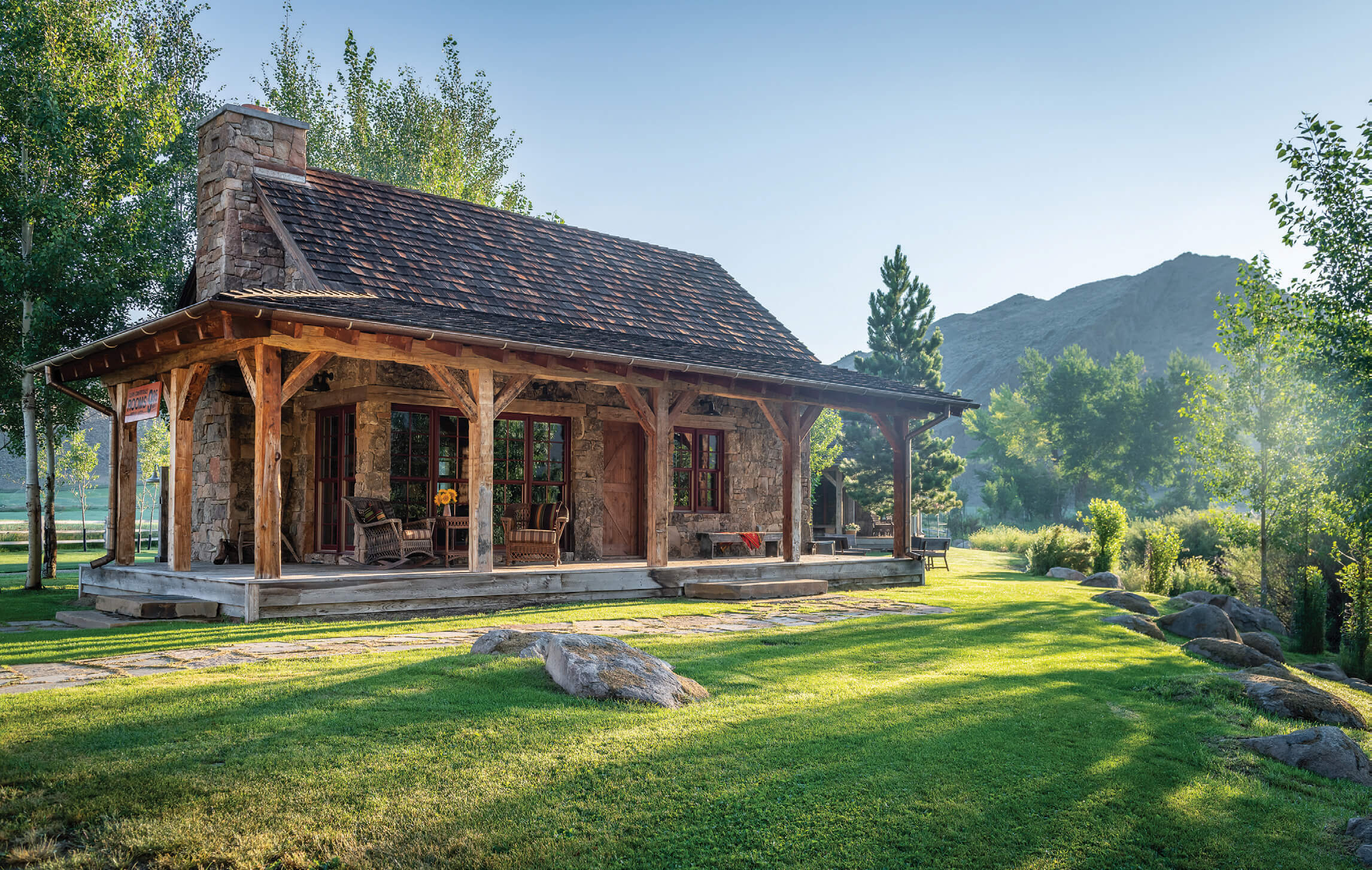 Twenty-five years ago, when a husband and wife from Los Angeles were traveling through the tiny town of Twin Bridges, Montana, they pulled up in front of a fly-fishing shop. There, the enthusiastic guide behind the counter told them about an iconic fishing lodge in the area. They booked a stay — and they ended up returning every year for the next 15. “We fell in love with Montana,” the husband says. “The sky, the light, the colors, the people, the pace of life.” 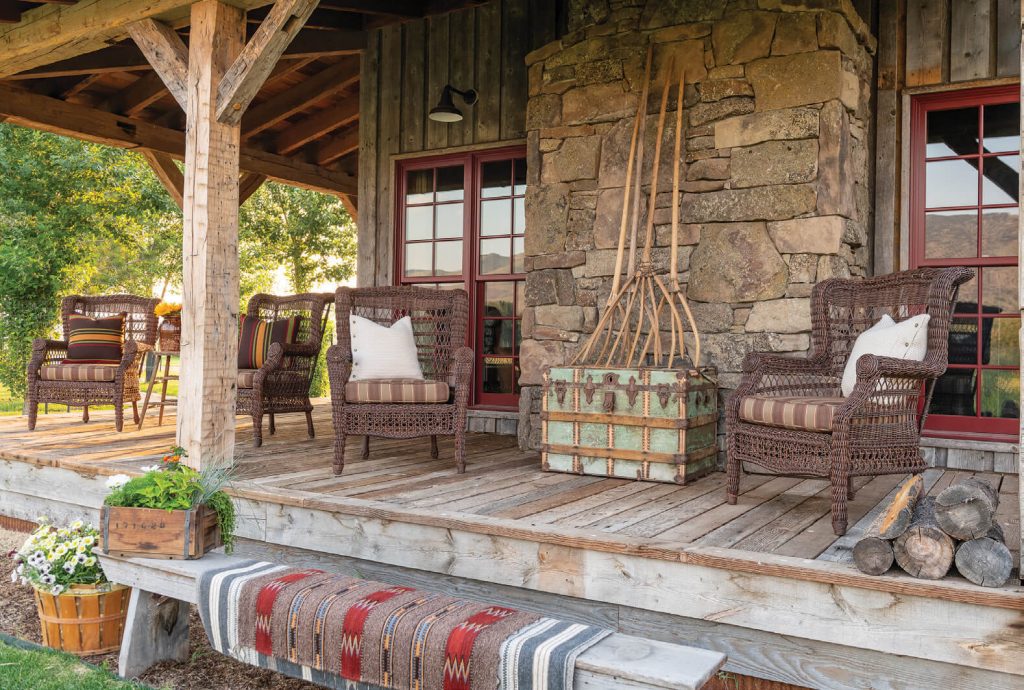 Red-trimmed windows add a hint of modernity to the Moose Cabin, while vintage collectibles add a traditional touch.

It was perhaps inevitable, then, that they would start looking for property of their own in this region of Southwest Montana, where the Ruby, Beaverhead, and Big Hole rivers come together to form the Jefferson River. They were driving with a realtor in the lower Big Hole Valley, the husband recalls, when he asked the driver to stop the car. “I got out and said, ‘This is it.’” When the realtor suggested they first view the ranch and existing buildings — none of which were quite ready to be lived in — he said there was no need. “It was the property itself, the way it was situated, the cottonwoods, the greenness, the alfalfa, and the mile of Big Hole River frontage. Everything about it was perfect,” he adds. 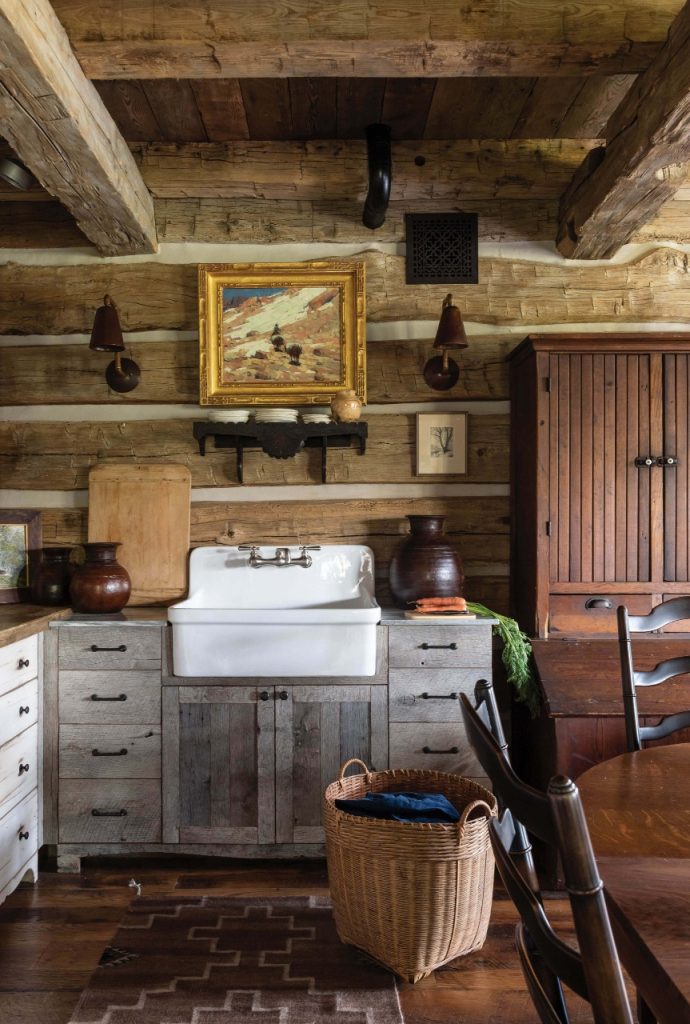 Laura Fedro, of the Bozeman-based Laura Fedro Interiors, was tasked with imbuing each cabin with texture, tone, and authenticity. In one of the cabin’s kitchens, a white porcelain apron-front sink is set within custom cabinets by Western Millwork. The custom copper sconces are from Stronghold Fabrication, and the artwork is by American landscape painter Edgar Payne.

With a little fixing up and a slight addition, the existing home and barn-like storage building was usable, so the family focused on making the property their own. As conservation-minded outdoors people, they stocked the two ponds with rainbow and brown trout and released ring-necked pheasants into the meadows. The land and riparian habitat were in good shape, having not been degraded by grazing livestock. A local couple were available as caretakers, and the wife had spent  part of her childhood on that very ranch, ensuring a unique level of attention and trust. Over the ensuing years, however, as the owners’ four grown kids started having children of their own, the addition to the main house — in spite of its eight-bed bunkroom — had reached its capacity, and it was time to expand. 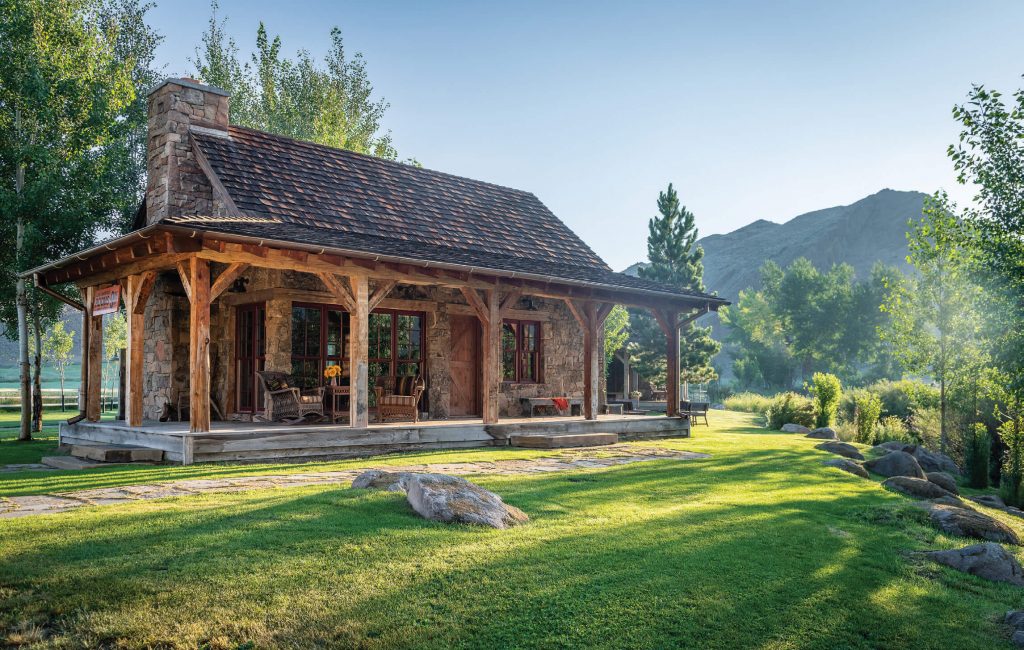 The owner asked his college friend, Los Angeles-based architect Bill Read (with whom he’d worked before), to create the initial concept for a guesthouse, and they retained Henri Foch, of Intrinsik Architecture in Bozeman, to translate the vision into reality. The result of the collaboration is the 900-square-foot Buffalo Cabin. Made up almost entirely of local Montana stone, it features a central stone fireplace, a generous porch that extends around two sides, and a shed roof supported by hand-hewn timbers. Befitting a cabin, the structure’s form is simple: a rectangular double-height box with a central ridge beam. The reclaimed wood headers on the large windows are painted red in a nod to modernity. The bedroom opens to a compact kitchen with a small round table, while a loft with twin beds overlooks the living area below. 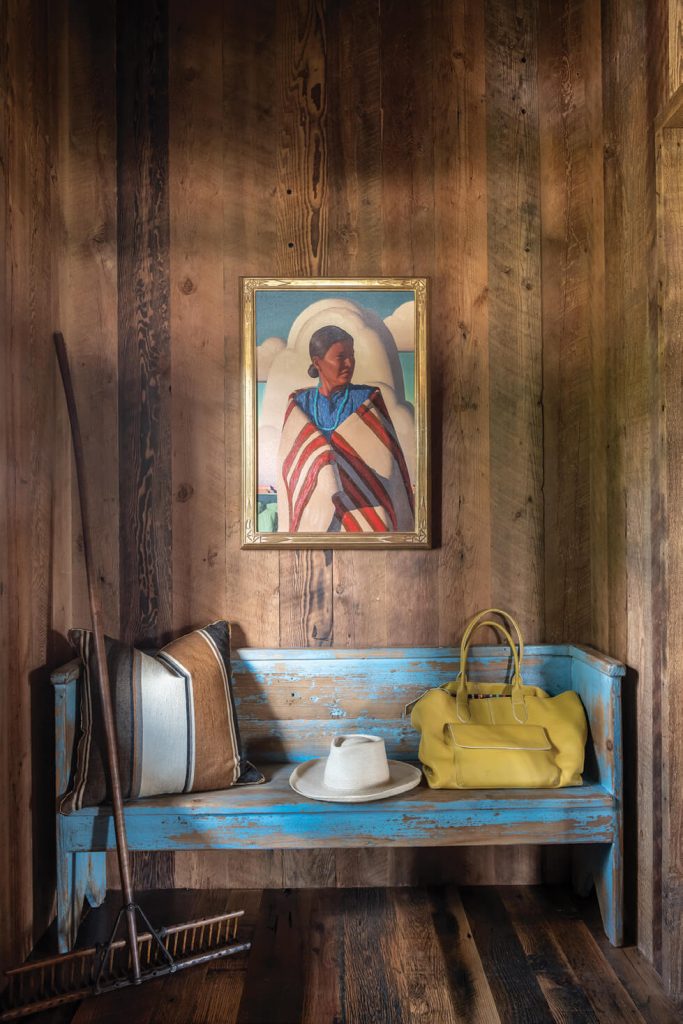 In the Moose Cabin, a weathered blue bench and a vintage doubleheaded hay rake — along with a striking painting by artist Logan Maxwell Hagege — create a Western theme at the home’s entry.

Perpendicular to the first cabin and just a short distance away — with a shared fire pit and horseshoe court between them — is the 1,500-square-foot Moose Cabin, named for the denizens of the wild who regularly wander by. This structure speaks to its partner cabin yet exhibits its own distinct character. Constructed of stone and reclaimed barn wood, its form is similar, but it features a small porch on one side, a single dormer on the opposite side, and a single-story extension under a shed roof. This structure, built to comfortably house a family, has a full living area that opens to a kitchen, a dining table for eight, two bedrooms, two bathrooms, and an upstairs sleeping loft. 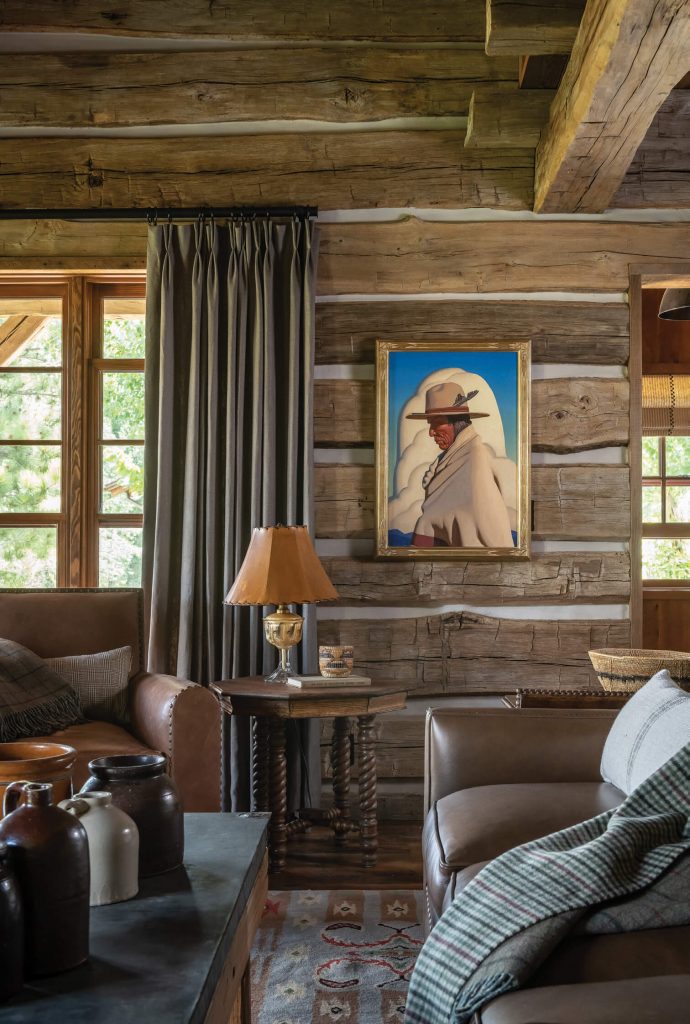 In one cabin’s living room, a subdued interior palette is matched by a collection of vintage jugs. The blue background and dramatic cloud formation in a painting by Logan Maxwell Hagege add a pop of color.

The interior design in both cabins focuses on texture, with a warmth and authenticity that’s conveyed through the reclaimed timber walls and flooring. And traditional plaster surfaces and custom cabinets are incorporated to create a quiet, restful space. Interior designer Laura Fedro, principal of the Bozeman-based Laura Fedro Interiors, curated vintage furnishings and artful objects, many of which were regionally sourced. She also collaborated with the owners to find other appropriate pieces from afar. 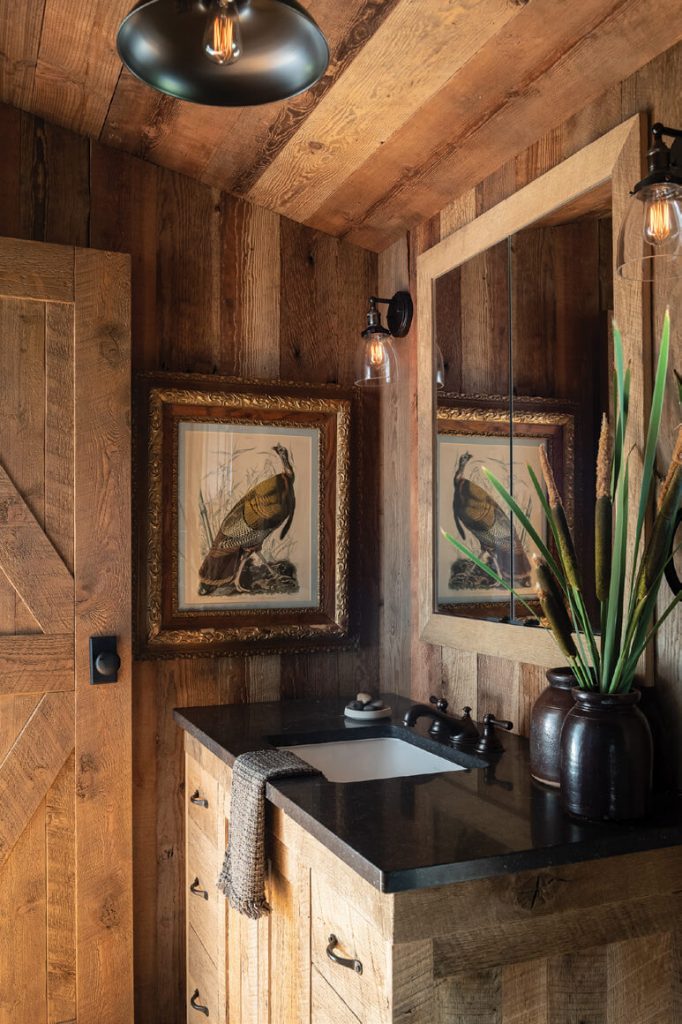 A sink in a guest bathroom is set within gray Foussana limestone, while an antique vessel filled with cattails and a Currier and Ives print brings nature indoors. 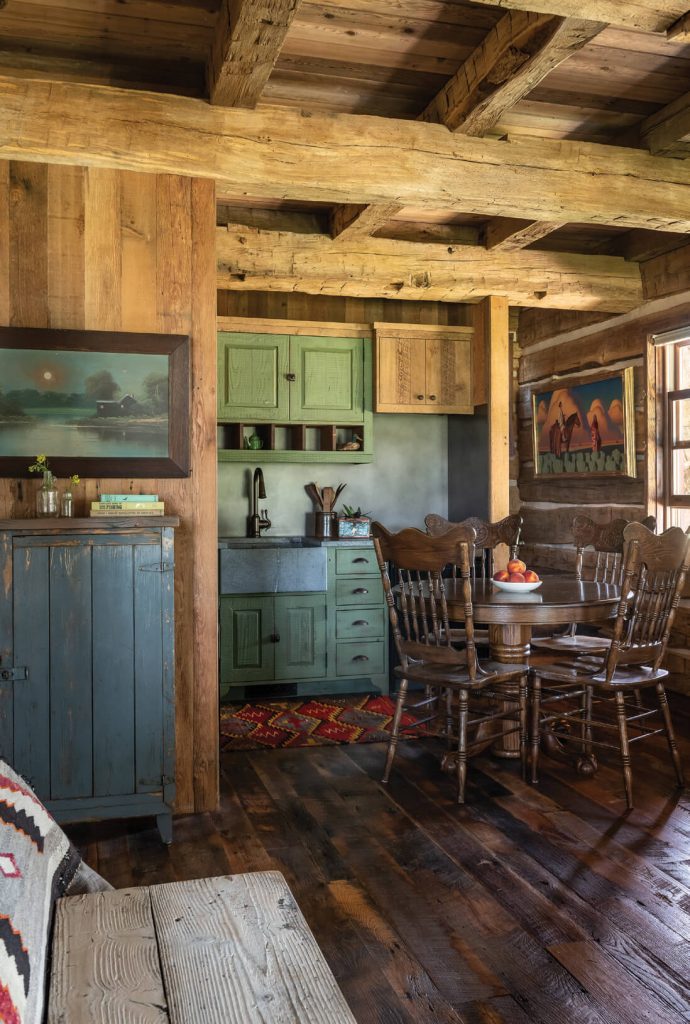 The painted cabinetry and artwork introduce color into the 900-square-foot Buffalo Cabin, while the windows cast light onto the textured hand-hewn beams.

Sited on a gentle rise in the river’s bottomland, near a tranquil rush-ringed pond, the cabins share quiet views across the meadows and foothills toward the sunrise and, from the upstairs windows, euphoric views of the Pioneer Mountains across the tops of the cottonwood trees to the west. Unlike much new construction, these structures appear to be rooted in their site. The meticulous details in both are the work of project manager Gordon Edsall and his team from JDL Construction Co., based in Sheridan, Montana. Their thoughtful, craftsman-like approach resulted in buildings that belong.The cabins are destined to endure for generations and age beautifully over time. 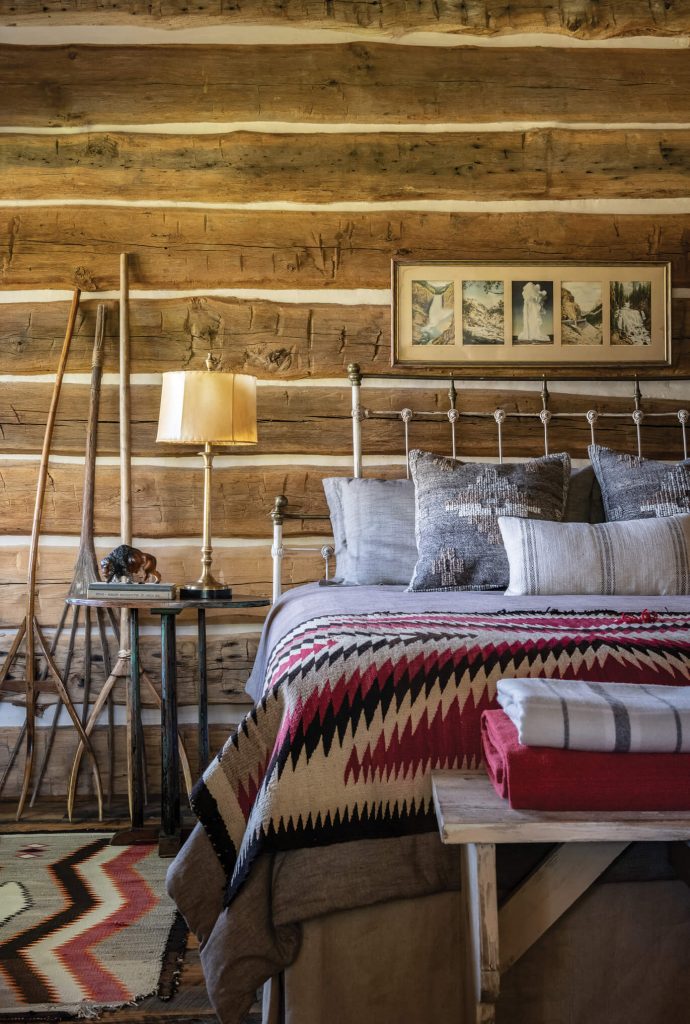 A bedroom is furnished with vintage Navajo rugs, handcrafted hay rakes, and a collection of historic photographs from Haynes Picture Shops, which were headquartered in Yellowstone National Park until the early 1960s. Interior designer Laura Fedro had the Victorian-era brass and iron headboard reworked to accommodate a king-sized bed.

Architect Henri Foch credits the success of the project to the quality craftsmanship, and also to the setting — the contrast between the aridity of the high desert and the lush, wildlife-rich ecosystem of the river bottom, surrounded by snow-capped mountains. Equally crucial are the materials, specifically the reclaimed wood from historic structures and the local stone, which ties the buildings to the land. These, he says, impart authenticity and historic integrity. 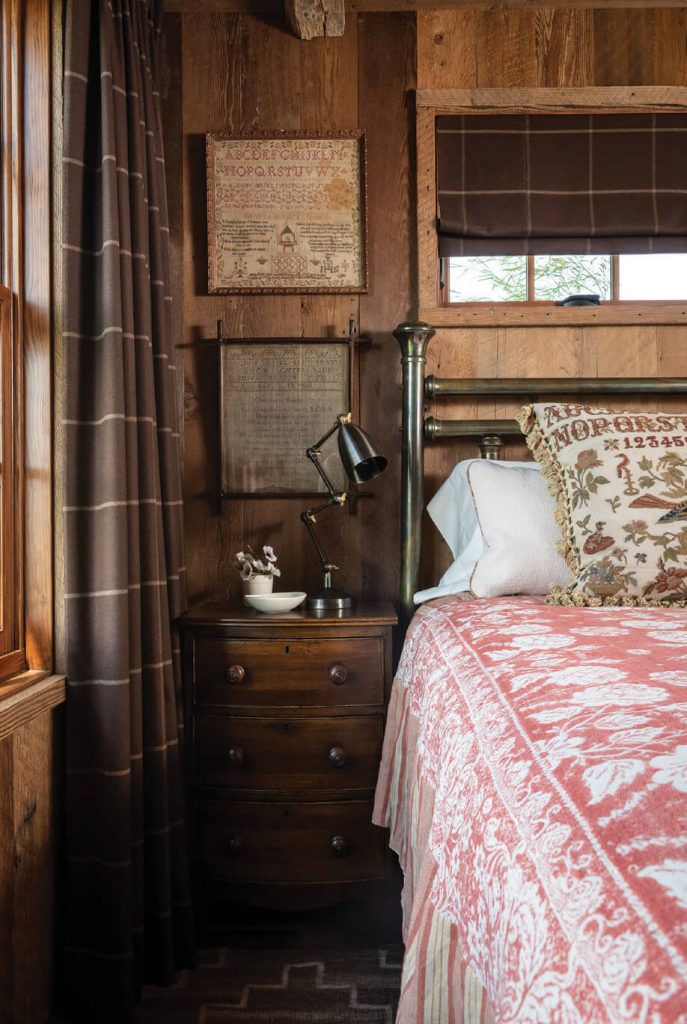 Another bedroom features a collection of turn-of-the-century cross-stitched samplers. The hand-loomed cover on the vintage brass bed dates back to 1879.

The property sees a lot of use starting in June and into the fall months, and cattle now graze on the land throughout the winter. Every Labor Day, the extended family — which includes the owners’ four kids and 13 grandchildren — comes together to fish, play, relax, and connect. “It’s become a gathering place and a refuge,” says the owner. 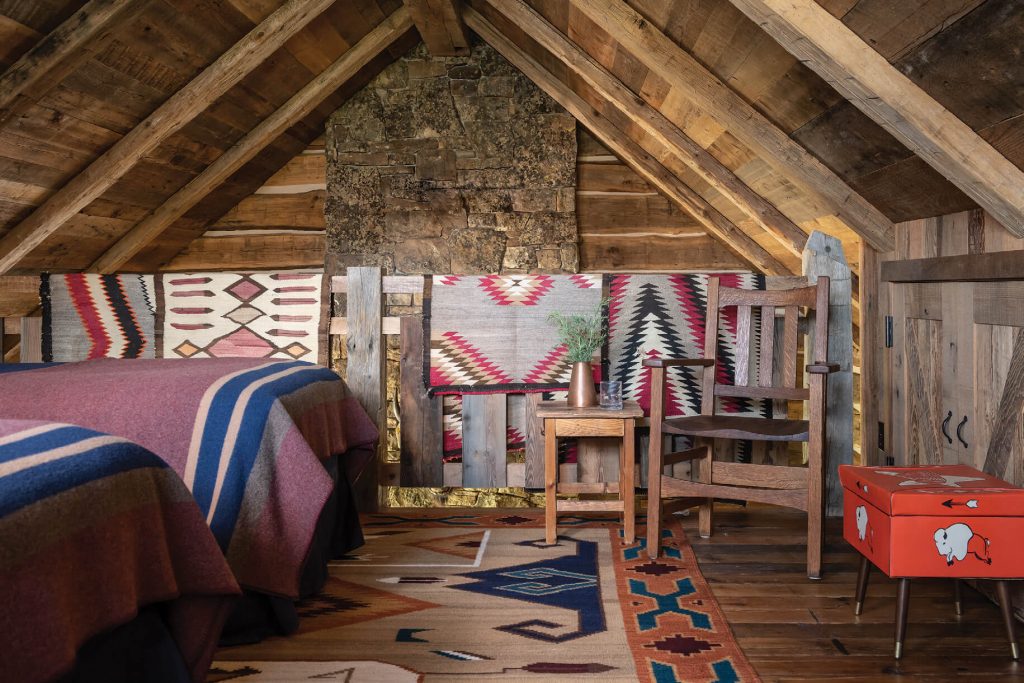 The Buffalo Cabin’s lofted bedroom features a variety of handcrafted antiques, including a Stickley armchair and side table, Pendleton blankets, and Navajo rugs. The vintage handpainted toy chest adds a touch of whimsy.