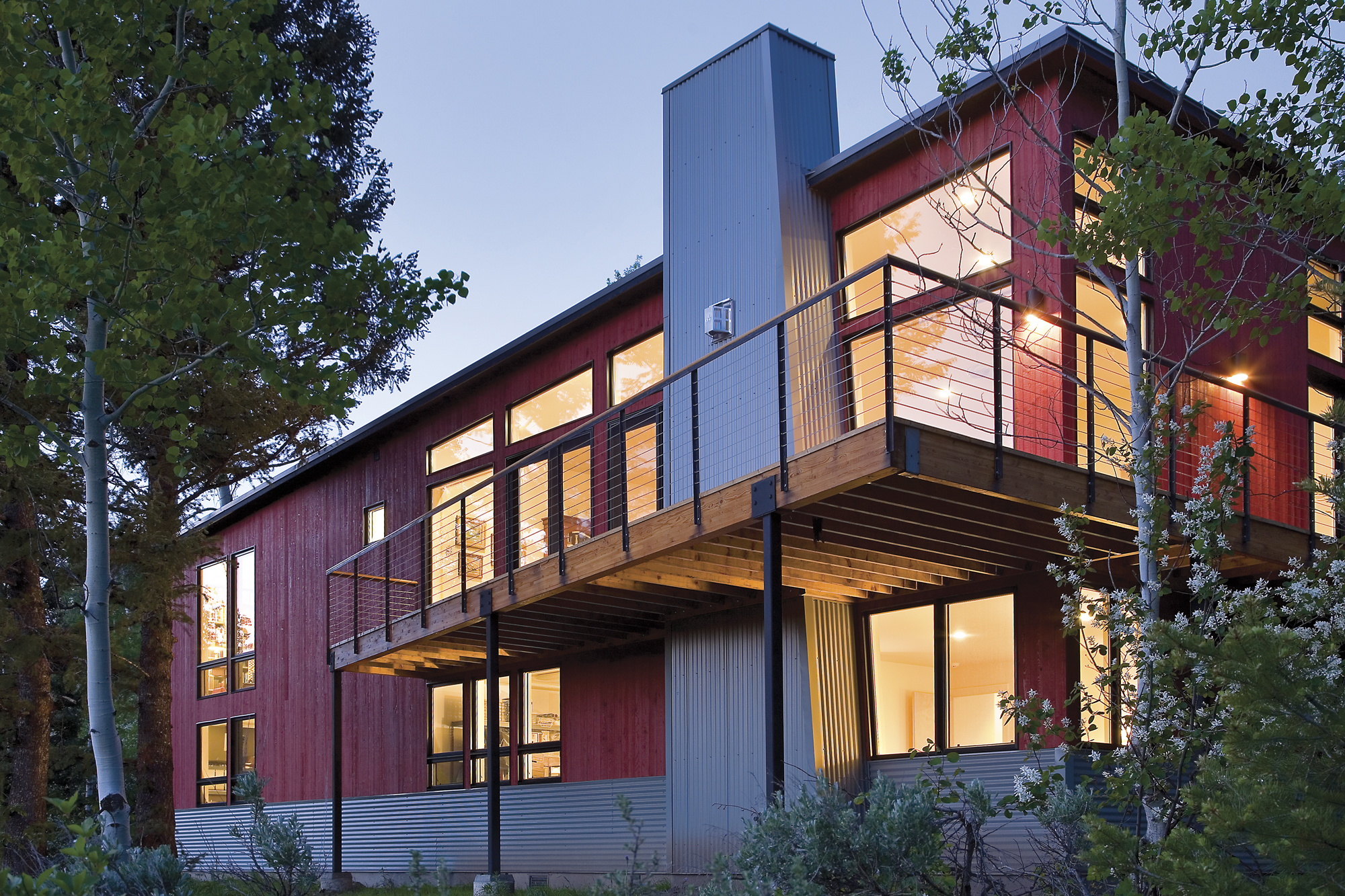 DESCENDING DOWN THE STEEP DRIVEWAY to the corrugated metal and cedar-planked home, you’d never guess it was built for less than half of Jackson Hole’s usual cost per square foot. And Alice Cornell even did it using a local architect, contractor and workers. I know what you’re thinking — “Well, that’s not too surprising. Since the recession started, building materials have dropped drastically in price and architects and contractors are scrambling for work.” Cornell moved into her house in 2007 though. So how’d she do it (while coming out with a gorgeous house)?

“My guiding principal was to have first-class construction without extravagant finishes,” says Cornell. Wandering around her home you notice what’s there rather than what’s not. There: A spacious master bedroom replete with built-in shelving, enough closet space for the entire von Trap family (and that’s just in the master bedroom), wide, open stairs, bamboo floors, a gas fireplace, and maple cabinetry in the kitchen. Not there: granite countertops, tiled showers, knotty alder baseboard, solid hardwood doors, and designer fixtures.

“My family and I vacationed in Jackson in 1957 and I knew I wanted to live here right then,” Cornell says. “It took me 50 years and I had a budget that was much more restrained than is usual for the area, but it happened.”

While you might think it would be the actual building that is most difficult when trying to design and construct on a budget, it wasn’t. At least not in Cornell’s case. (Not surprisingly, Cornell can’t stop singing the praises of Mill Iron Timberworks, the builder that helped her come within five-percent of her budget.) Finding an architect was though.

Two of the three architects Cornell approached about the project weren’t interested in working on a residence planned to cost less than $250/square foot. Stephen Dynia, principal of Stephen Dynia Architects, which designed the Jackson Hole Center for the Arts and won the AIA’s 2008 Wyoming Firm of the Year Honor Award, was immediately intrigued however.

“Anyone can design a $5 million house,” Dynia says. “It gets more challenging when it’s an either/or situation instead of both/and. Budget constraints produce more disciplined, thoughtful, and efficient solutions.”

For Cornell, a retired archivist and digital publications editor who shares this house with her two dogs and extensive collections of books and western and wildlife miniature paintings, thoughtful and efficient means lots of built-ins, having the primary living spaces on the second floor, and open space. “The house basically has four rooms,” Cornell says. Although not even half the size of the second floor — not counting the attached garage — the first floor has two of them: a guest room and, because one of the things Cornell had to sacrifice to meet her budget was a basement, a room she refers to as “the shop.” Upstairs, there’s the master bedroom and the great room, which is one of Dynia’s favorite parts of the home. (All told, the house, including the attached garage, is 3,300 square feet.)

“The kitchen is open to the living and dining areas, but its flat, lower ceiling gives it an intimate feel,” Dynia says. “The living and dining area has a higher, sloping ceiling that makes it feel really spacious, especially for the square area it actually has.” The great room’s western wall is almost all glass (the exception is the gas fireplace). “A recurring theme in the work I do involves framing spectacular views,” Dynia says. “This property has quite a few, but that’s the best. You’re looking right down the Snake River.”

While the great room is dominated by the views, elsewhere in the house Dynia keeps the outside hidden, or at least treats it with restrained modesty. After entering, guests are given a teasing glimpse back at the aspen and pines they just walked through. Ascending the stairs to the main living and entertaining areas, the view is temporarily lost. But then you arrive at a landing and a window frames an aspen grove and, in early summer, wildflowers. At the top of the stairs, there’s the wall of windows on the west. “I like the idea of glimpsing a view, denying it, and then recapturing it as you enter the primary space,” Dynia explains. Even with all the windows though, Cornell only sees one other house.

“I never would have imagined myself in a contemporary house,” Cornell says. “[Stephen] went out of his way to create something affordable and interesting though and I love it.” Cornell admits there were some things she splurged on: a steel roof, bamboo floors, the gas fireplace, and a dumb waiter. Dynia and Mill Iron Timberworks’ John Walker also talked her into maple-fronted kitchen cabinetry. “I had no problem with white melamine, but [Stephen] and John begged me to reconsider.”

The kitchen, as well as the interior stairs and auxiliary spaces like the pantry, are in what Dynia refers to as the second piece of Cornell’s house. The first piece includes all the major living areas (with the exception of the kitchen). Inside, the two “pieces” join together seamlessly despite having distinctive personalities, mostly due to the differences in their ceilings as mentioned. Outside, form and material express the difference. The second piece’s exterior is corrugated steel. The main piece is covered in cedar stained a shade of red often seen in Dynia’s projects.

“No one is going to look at this house and say it’s not beautifully designed and built, just like so many other homes in the area,” Cornell says. “But, unlike so many of those other homes, this one proves you don’t need to have a giant budget.” 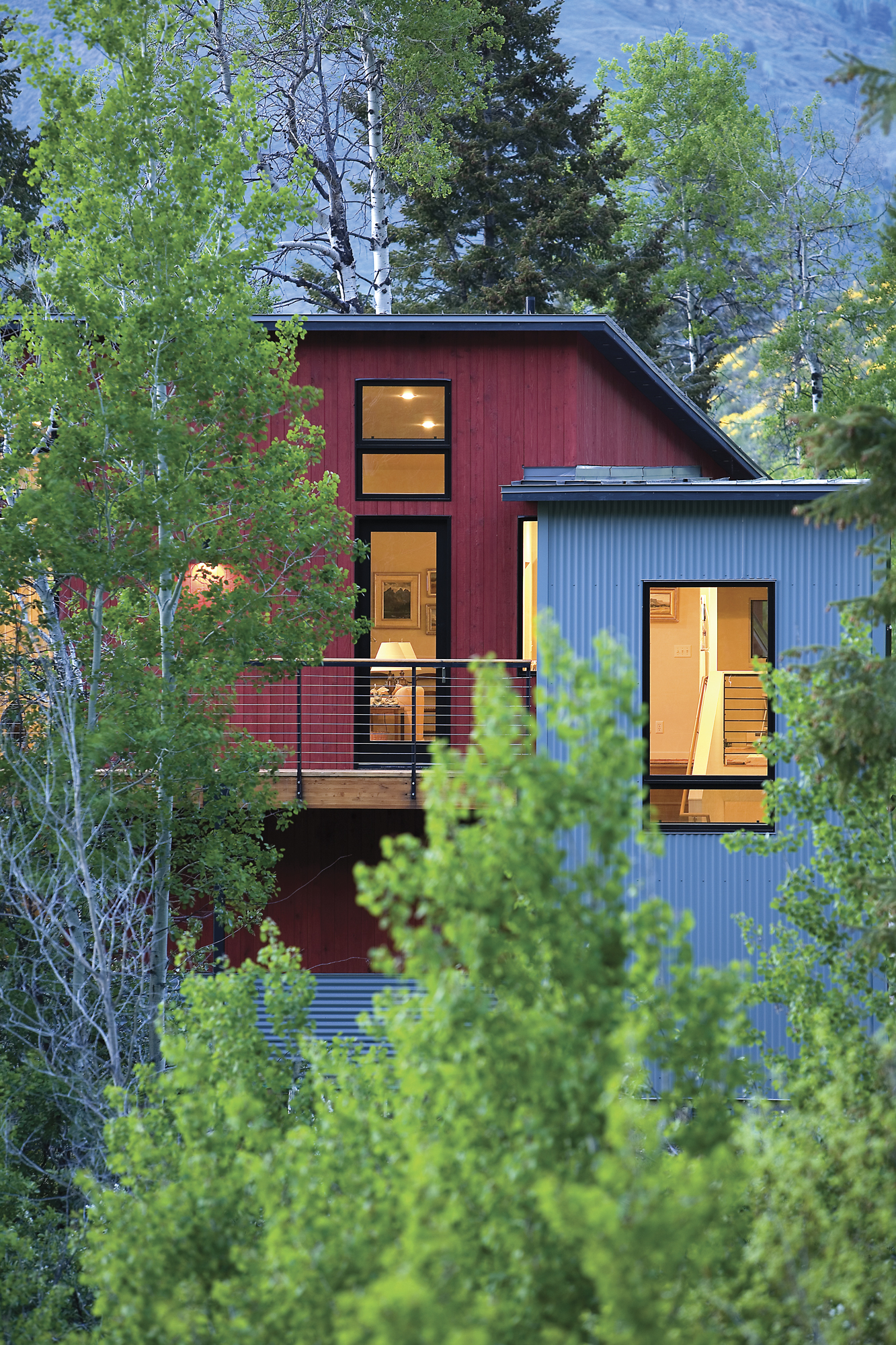 A view of the home through the trees. 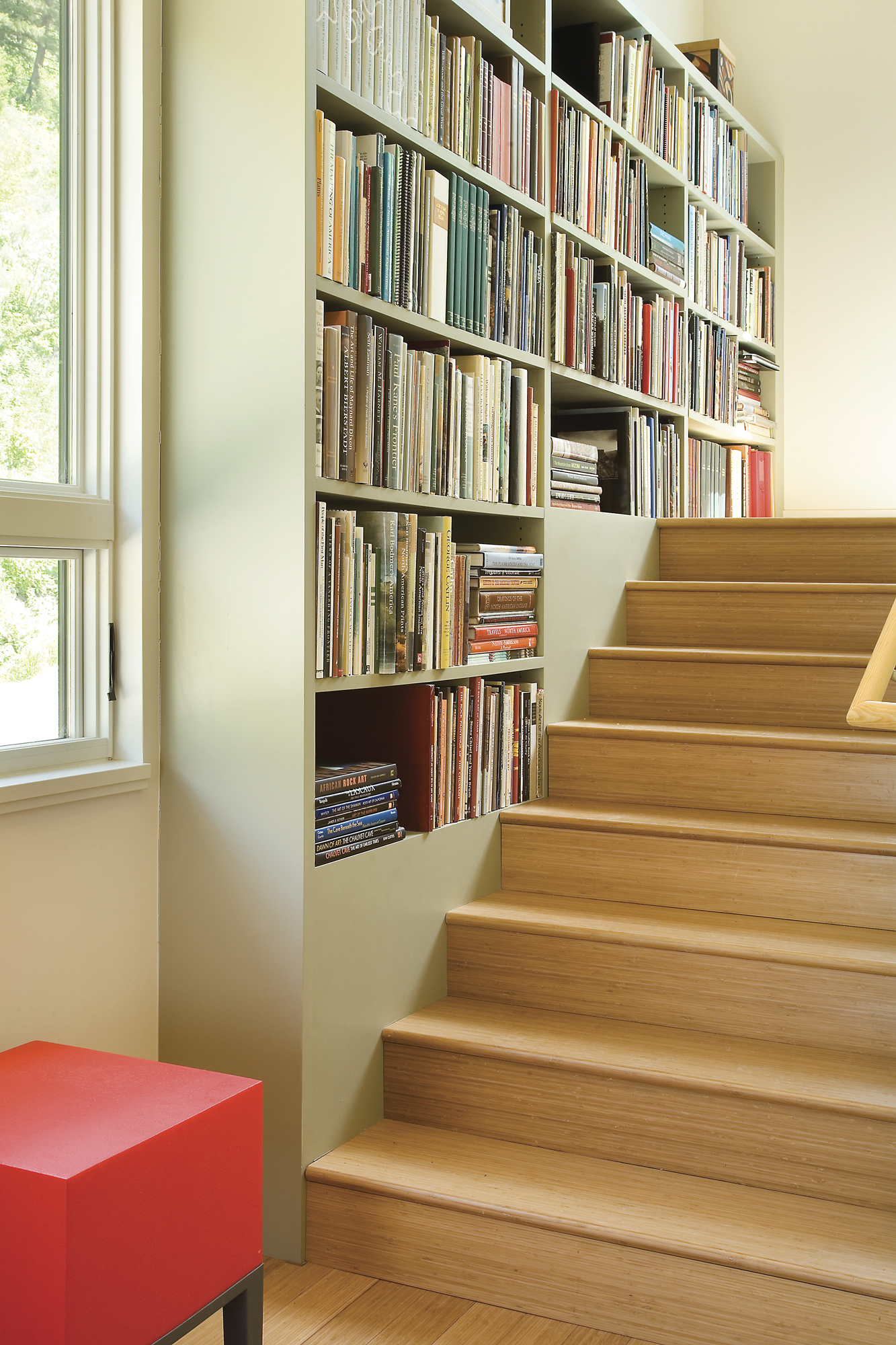 Dynia knew the owner had lots of books; almost every room (and even the stairway) has some sort of built-in shelving. 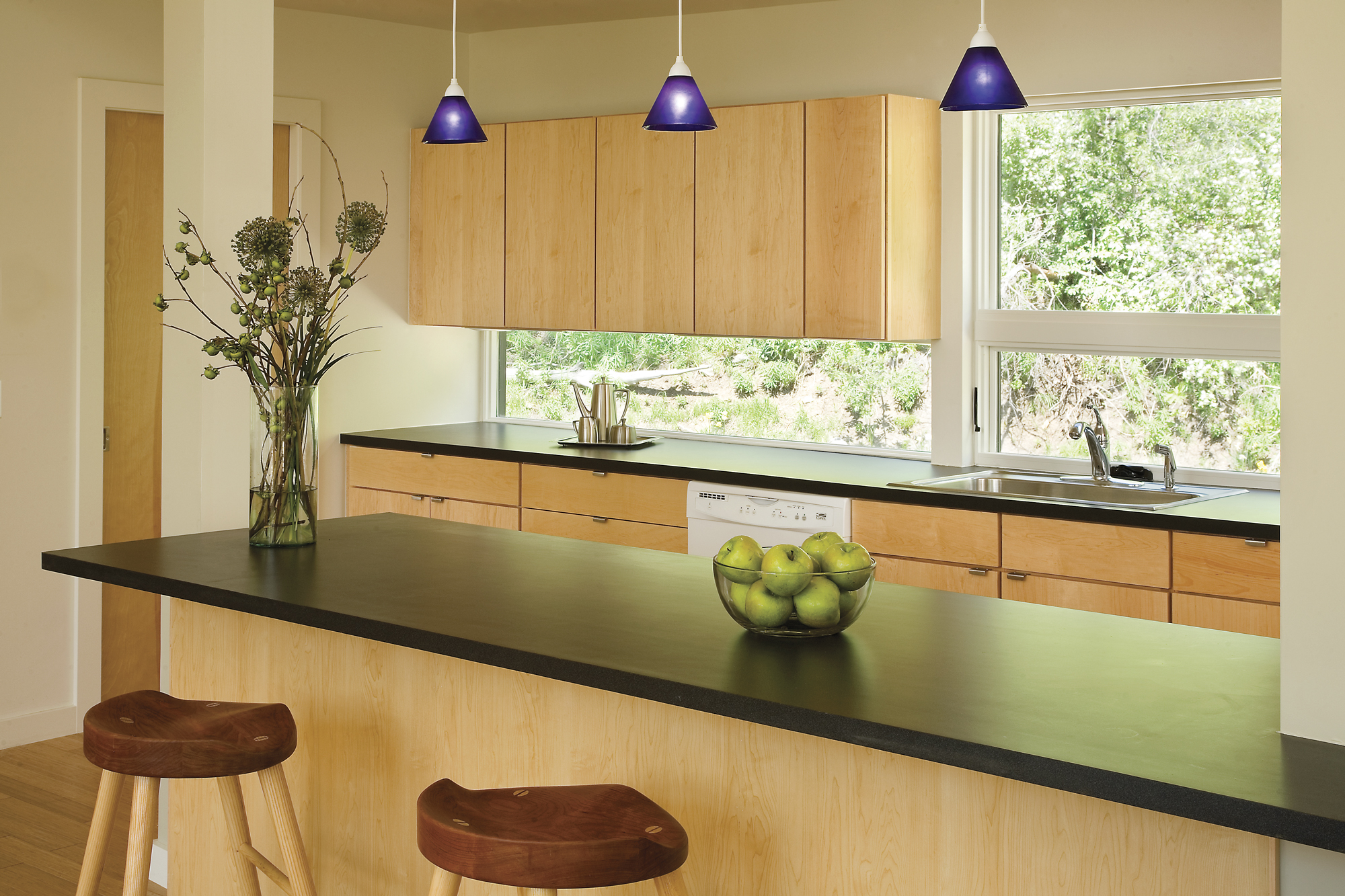 The owner says she’s glad she was talked into maple cabinetry in the kitchen. “I thought white melamine was the only option I had with my budget. Stephen and John really pushed for the maple though and it didn’t cost that much more. Some ‘extravagant’ finishes are a better investment than others.” 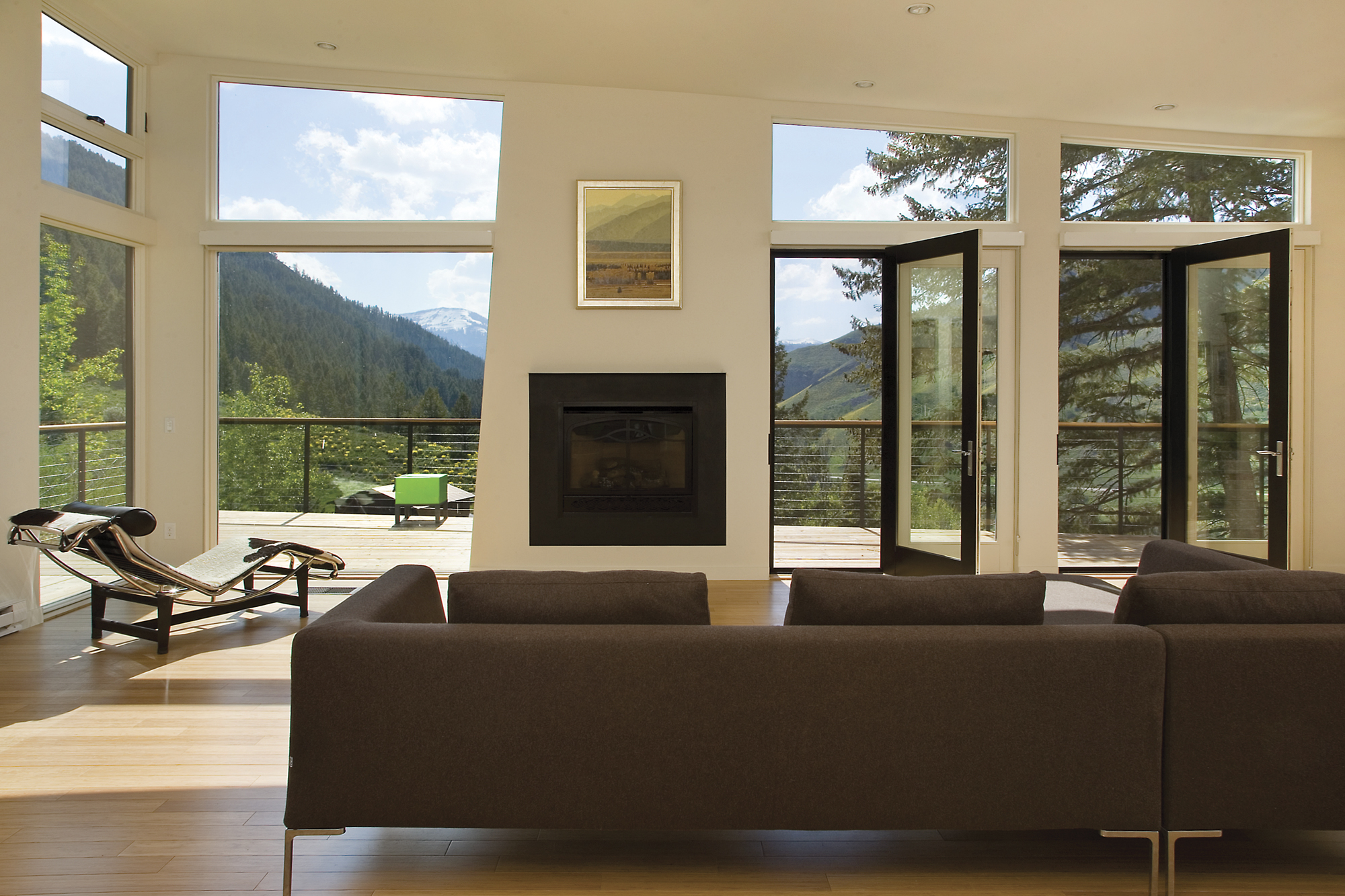 The soaring ceilings in the great room help make the space feel big; the lack of right angles – every corner is three-degrees off – keeps the design interesting, even when it has to compete with a wall of windows looking out at the Snake River.