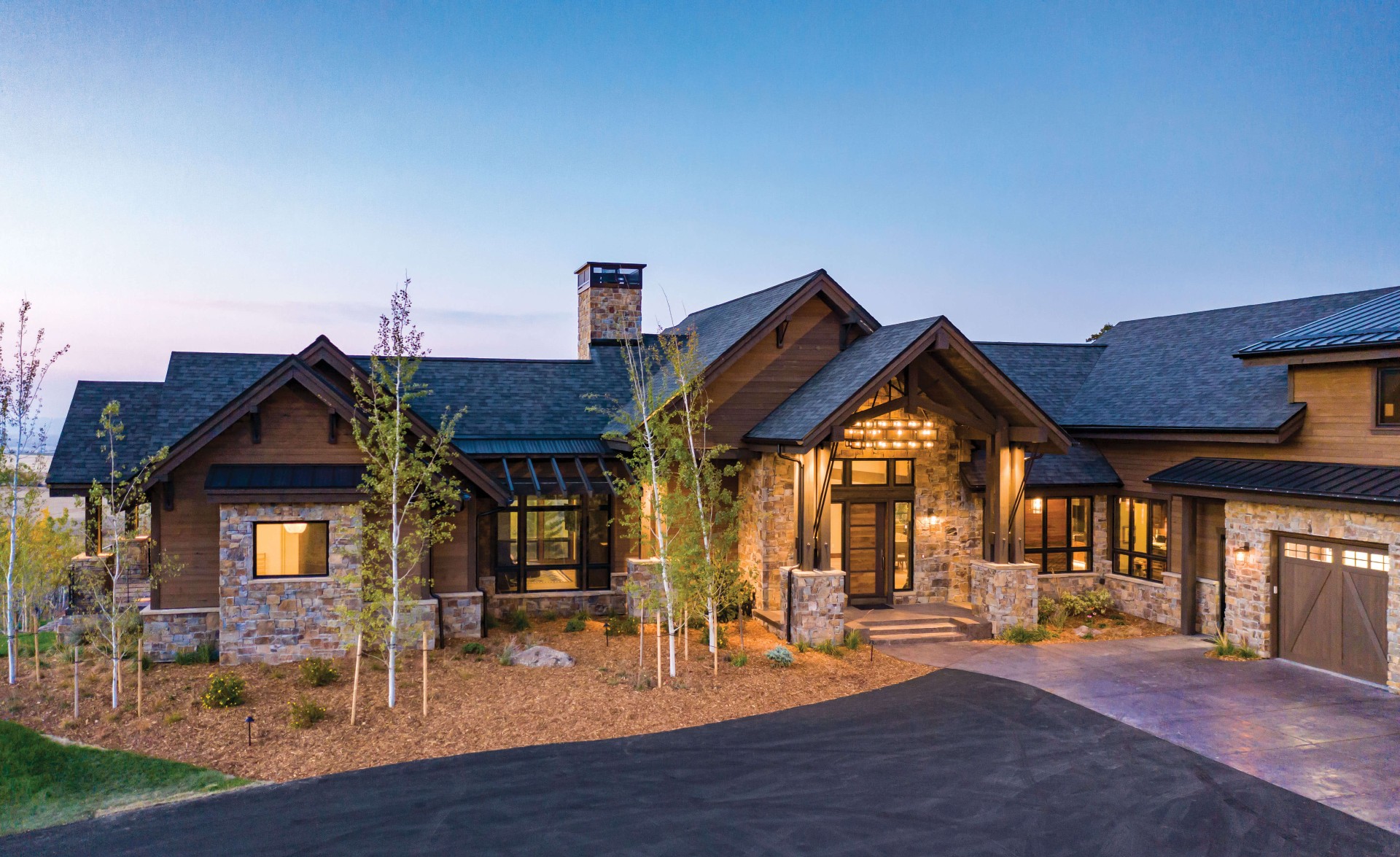 The welcoming entrance to this home near Bozeman, Montana features a custom outdoor chandelier by Big Timberworks.

While looking for property around Bozeman, Montana, custom home builder Mike Zoske and his client discovered a 300-acre parcel located off the beaten path, but not far from town. Before purchasing the land, he and Zoske tossed around ideas. “The owner wanted to transform the property into a place that would serve as a home base for his family,” Zoske says. “Originally from Montana, he worked all over the world, and now found himself able to finally enjoy his home state. 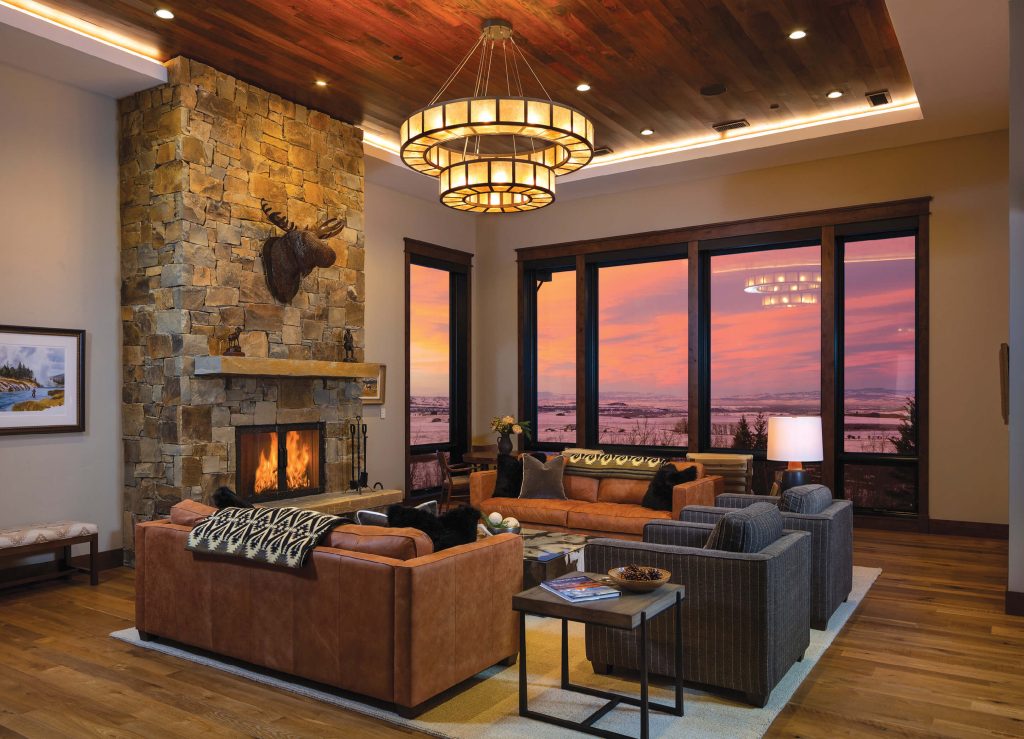 The great room is situated to take in the views of the surrounding valley.

They walked the site together, and Zoske saw the potential immediately. “I remember thinking how unique the property was, so close to Bozeman,” he says. “It offered amazing views from nearly every angle, and it was packed with wildlife.” Knowing it was going to be a project that would live close to his heart, Zoske committed to taking the house from concept to completion. 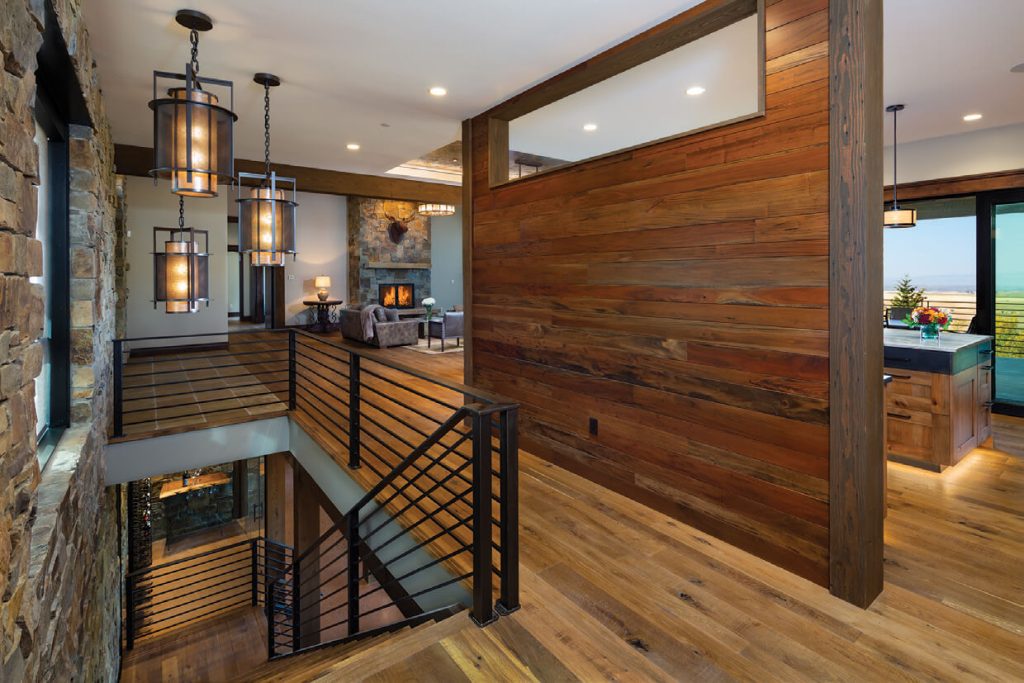 Custom lighting by Hammerton hangs over the stairwell, adding a unique focal point, and a mahogany dividing wall separates the living spaces.

The first step was building a road to the property and a bridge that allowed them to cross the creek that bisected the land. “We knew from that first day, this wasn’t going to be just a house,” Zoske says. The owner also wanted a shop with caretaker quarters, which quickly grew into what Zoske calls the Garage-Mahal. “It’s really unique, with steel trusses, turnbuckles, and supporting beams that are more art than anything else,” he adds. 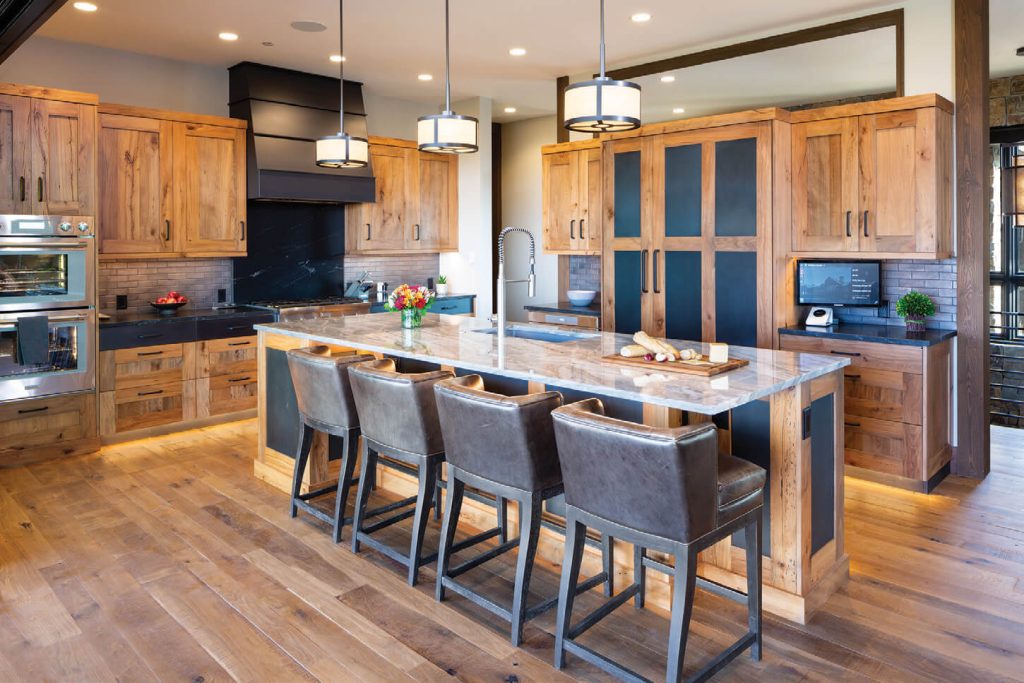 Then, Zoske and his team built a guest house in a meadow, and what he calls a toy box, to hold “big boy toys,” such as ATVs and the like. And a few years later, the full concept for the main home and acreage came to fruition. “The house sits on the ridge with spectacular views of the mountains behind, in front, and to the west,” Zoske says. “To the east is a forest populated with elk, so we needed to take this into account when thinking about designing the house. That’s what we took to Keith Redfern.” 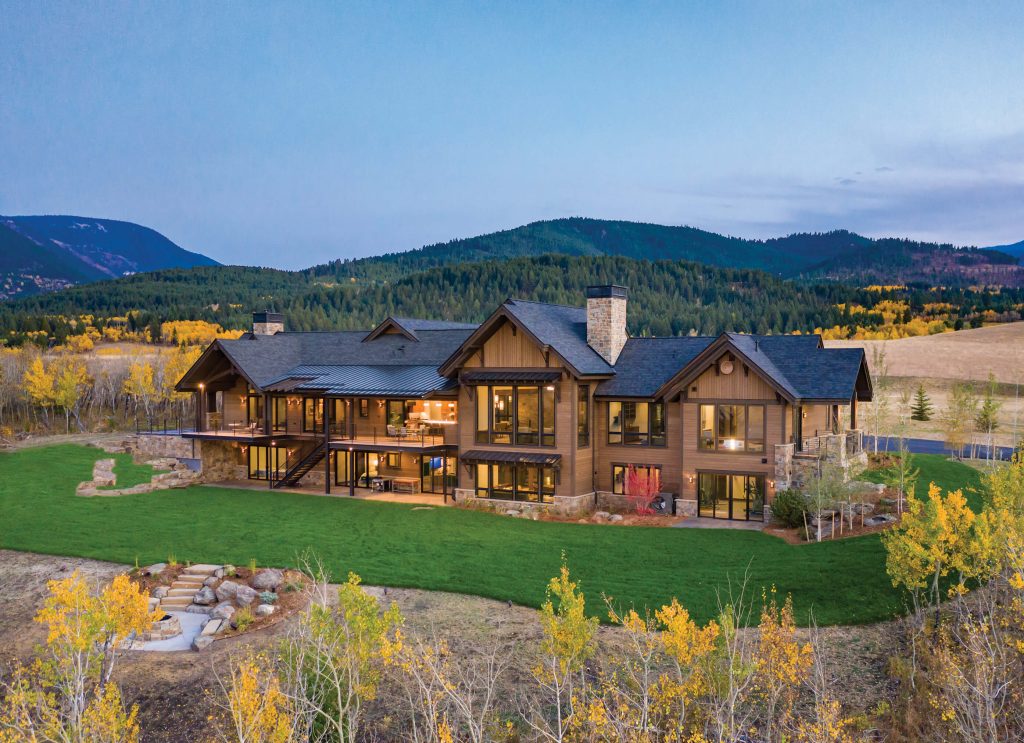 Facing mountain views, the back side of the home opens to a large lawn that leads to a step-down fire pit.

As the architect, Redfern, of the Bozeman-based Concept Seven Designs, created a structure that sits perched on the hillside, but belies the size and scope of the residence. “It looks nice, but you have no idea how big it is,” he says. “And you don’t need it to look like you took over the entire property.” From the rear, however, windows and glass allow a nearly 360-degree vista. 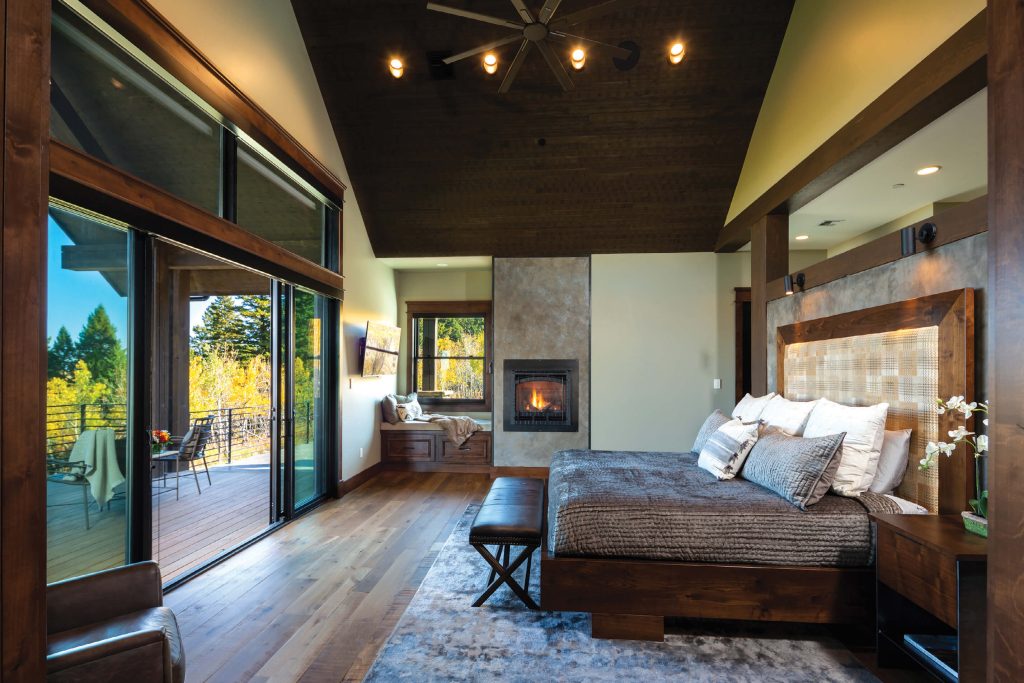 The owners’ suite features a cozy fireplace and an inviting private patio.

At 9,650 square feet, the home is expansive, and it doesn’t fall into one definitive style. “We had to be careful not to follow a trend, but to design it so the home looks relevant for the long term,” Redfern says. “The most important thing for me is function. No matter what it looks like or the style the house conforms to, it has to function well. If it doesn’t do that, then it doesn’t live right.” 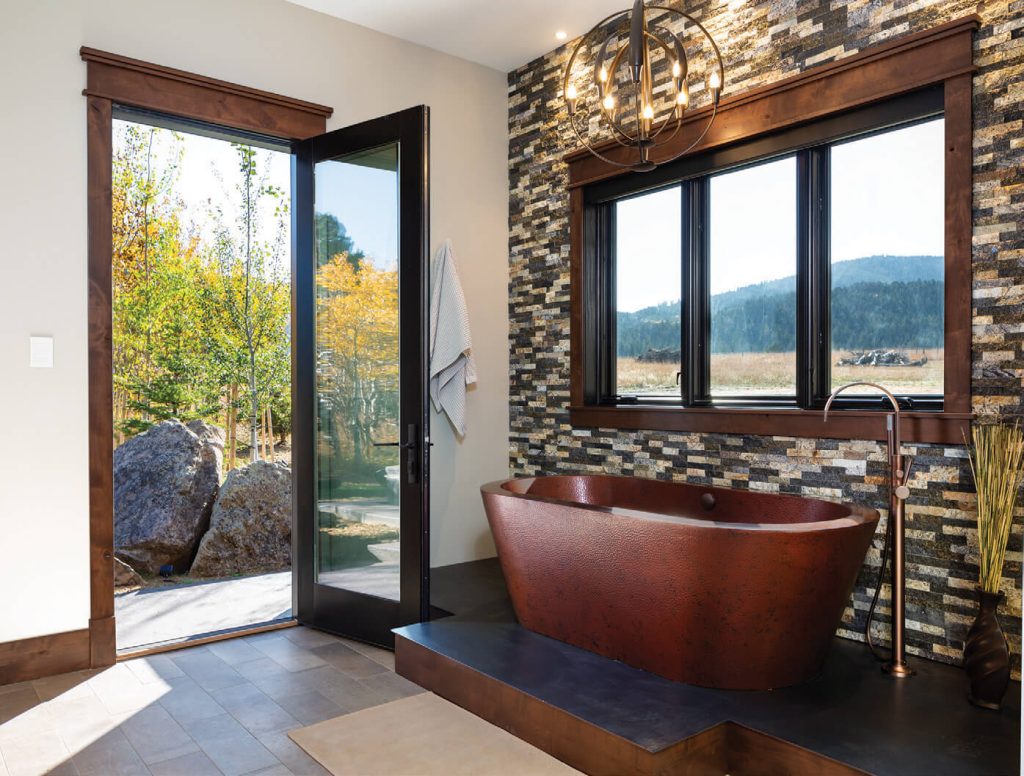 The freestanding copper tub in the adjoining bathroom is framed by reclaimed granite and opens to a private outdoor hot tub.

In this case, it was important that everyone have their own private spaces, and both Redfern and Zoske wanted to take advantage of the incredible views. They worked closely with the owner, continuously revising plans to make sure they were meeting his and his family’s wishes and needs. “Doing multiple revisions, you discover how the rooms interact, and how it becomes what the owner wants,” Redfern says. “Sometimes, a room needs to be re-thought. Where the property is located also has an impact on the ultimate design. This one is a linear house to take advantage of the views. When you’re on top of the ridge, the higher you go, the better the views become.” When Redfern visited the property with the owner before anything was built, he asked, “Where do you want to stand in the morning with a cup of coffee?” From there, everything fell into place. 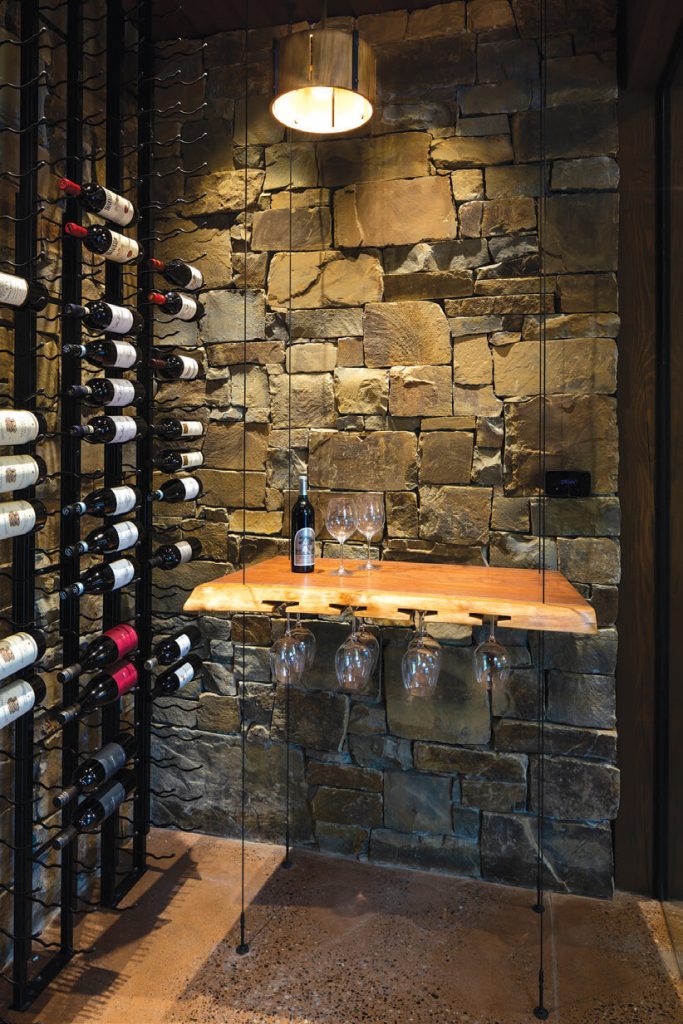 In the wine cellar, a custom suspended walnut shelf for decanting select varieties is spotlighted.

The main house — consisting of five bedrooms, a primary suite, two guest suites, and a bunkroom with an extra bedroom — fulfills the owner’s wish to transform the property into a family getaway, where everyone can enjoy their own space, but also have plenty of gathering opportunities. The front door opens to the center of the house and views of the undulating landscape. The living room, dining room, and kitchen are all laid out in an inviting open floor plan that showcases the deep mahogany ceilings. The wing of the house that features the owner’s office and bedroom suite also includes a private covered deck. 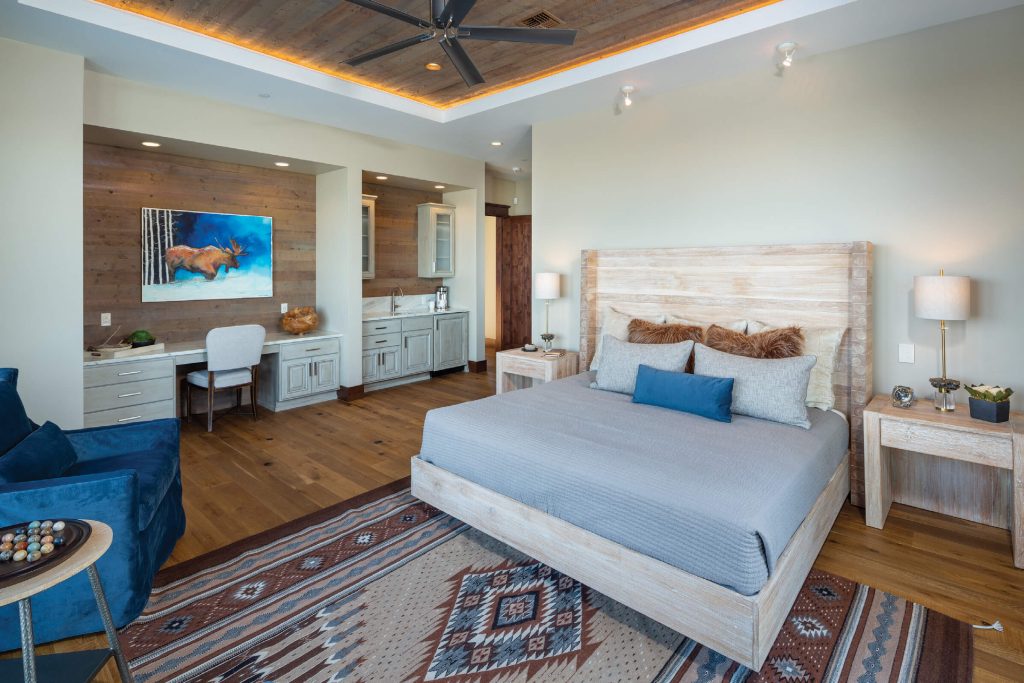 This guest suite provides a workstation and coffee bar for busy visitors.

“The coolest part is the kitchen and dining room, because they completely open up to a covered deck overlooking the Gallatin Valley,” Zoske says. “We put in 21 feet of glass lift-and-slide panels, so the entire wall opens.” Additionally, an interior staircase descends to a lower level where a wine room, like a crown jewel, displays a stone wall encased in glass with appropriate temperature and climate controls. 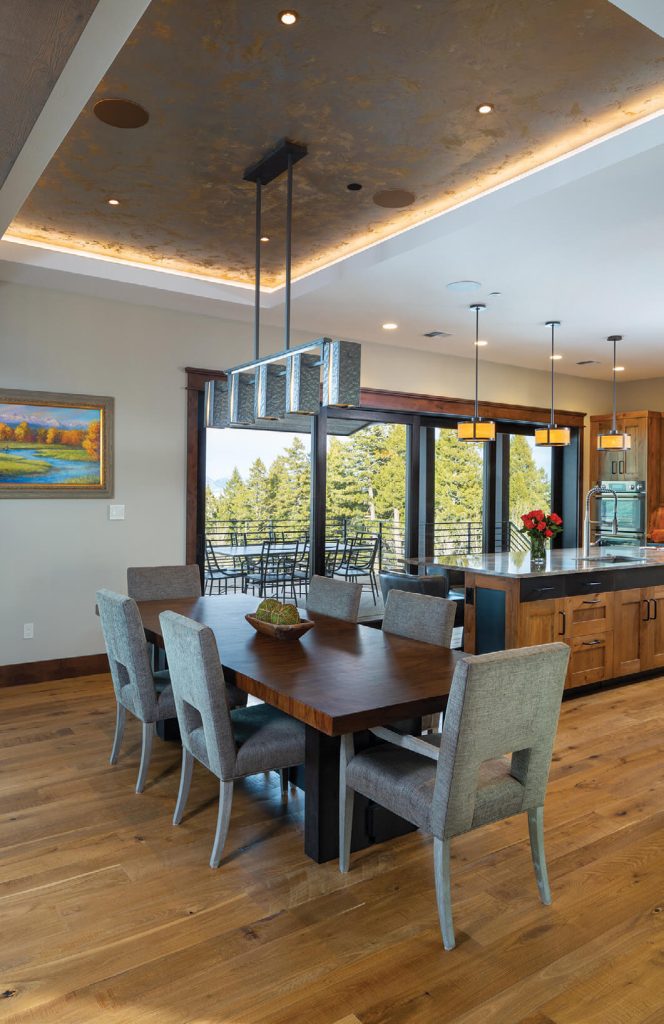 The outdoor living spaces include a patio that’s built into the hill, abutting the adjacent forest, along with a hot tub and a fireplace to enjoy during the chilly evenings. “It really is an escape from the everyday, a sanctuary,” Zoske says. “It can feel transformative.”