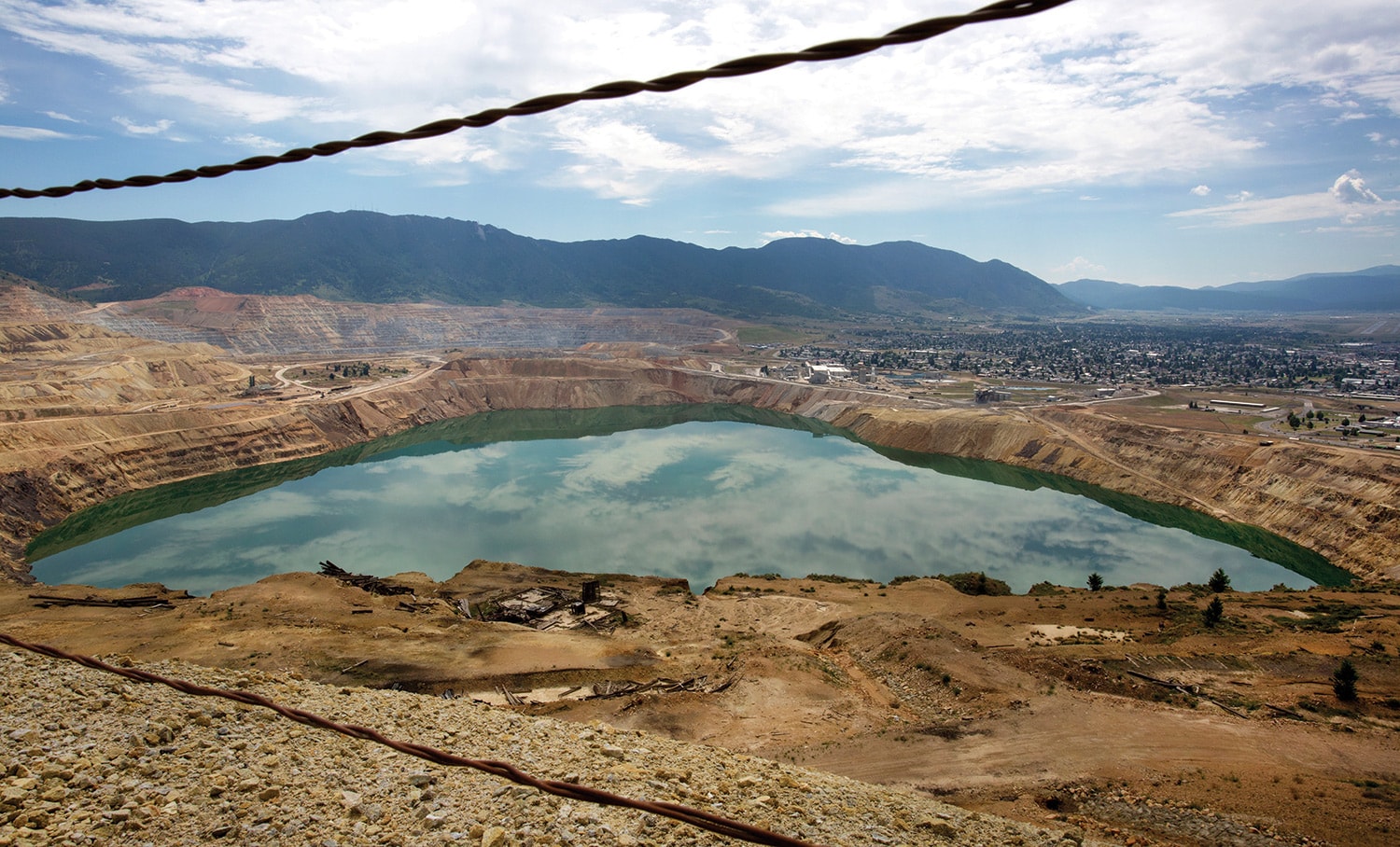 The Berkeley Pit, the most visible aspect of the largest Superfund complex in America, is filling with groundwater at a rate of 1,800 gallons per minute. opposite: Fritz Daily has spent most of his life working on behalf of Butte.

BUTTE, AMERICA. A city built by immigrants, by Irish and Poles, Germans and Italians and Czechs, by second sons and daughters, pioneers who landed in Butte to dig down and build a life. During its heyday, there were as many as 225 mines operating in Butte. “No Smoking” signs, as has been often said, were posted in 16 different languages. Headframes bloomed around town. The copper extracted from under this hill, I’ve read, would be enough to pave a four-lane highway 4 inches thick, from Butte to Salt Lake City, then further. When the lights first flickered on in America, it was largely thanks to the sweat and blood given by Butte. 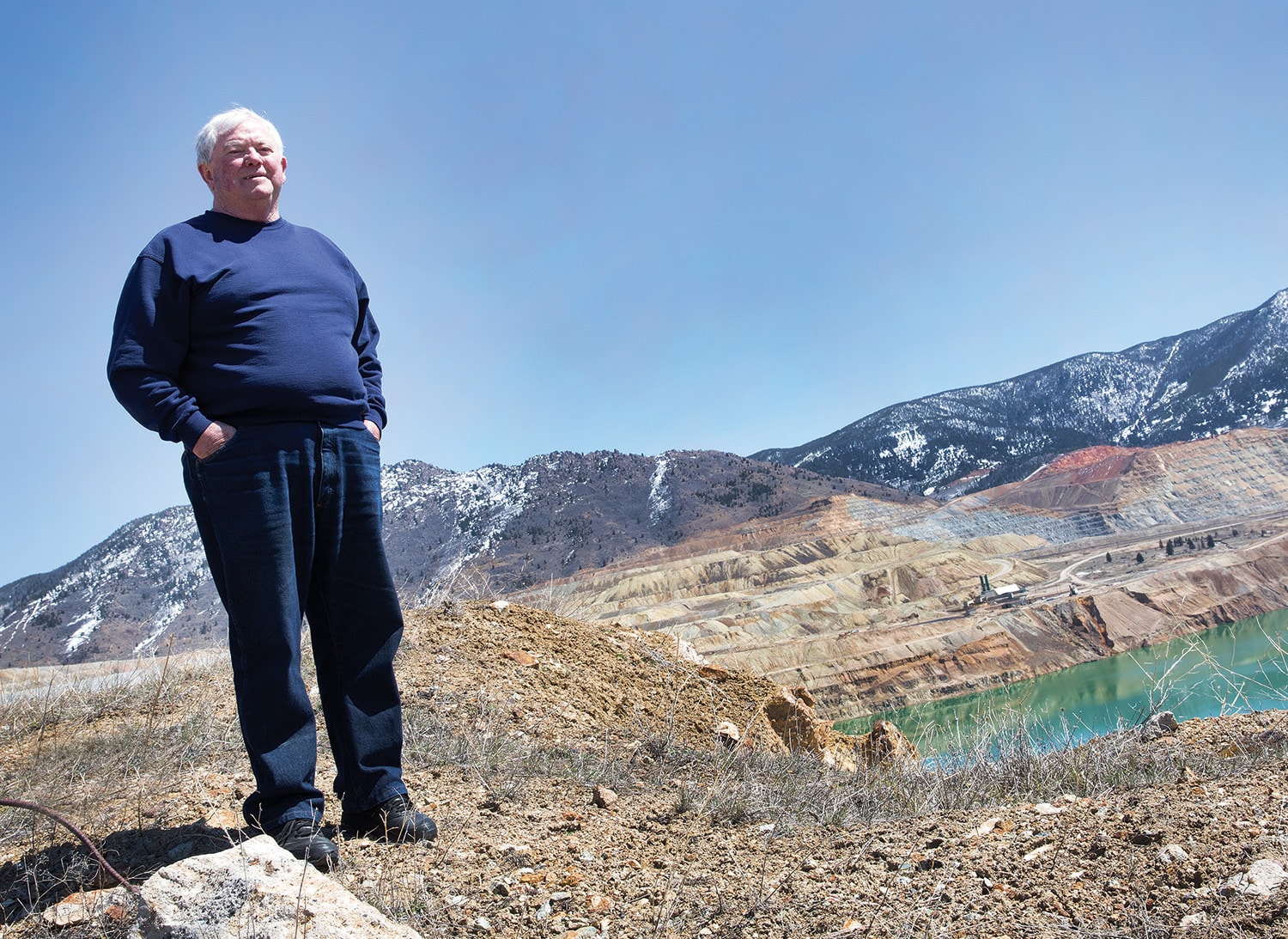 These days, though, the private fortunes are long gone, blown apart like seeds off a dandelion. What’s left is the toxic legacy: a cold, black, sloshy heart at the headwaters of the Clark Fork and Columbia rivers. America’s largest Superfund site.

On April 22, 1982, the Atlantic Richfield Co. (ARCO) shut off the massive pumps in Butte’s Kelley Mine complex. These pumps, 3,900 feet below the surface, could move as much as 7 million gallons of water a day. The pumps went quiet at midnight, and then the water started to rise, flooding the 10,000 miles of tunnels honeycombed under Butte, seeping into the Berkeley Pit, an open-pit copper mine just below the Continental Divide. These days, the waters in the pit and mine shafts are still rising, filling the pit at a rate of around 1,800 gallons per minute. With a pH akin to lemon juice and containing a heavy stew of toxic minerals (copper, iron, manganese, aluminum, potassium, cadmium, etc.), Berkeley is a 50-billion gallon fuse burning slowly toward water-table spillover. A ticking clock right out of Hollywood. If nothing is done by 2023, the toxic water will hit critical mass and start pouring out into Silver Bow Creek, which flows into the Clark Fork River. Which feeds into the Columbia River.

Superfund mitigation plans are in place, but you’d have to say that the jury is still out with regard to their long-term viability. And because there is very little transparency behind some of the most crucial agreements between the Environmental Protection Agency, ARCO, and the State of Montana (closed doors are the standard rather than the exception), there’s also little to be had in the way of genuine reassurance. It’s a complicated business, and one not easily understood. The story of the Berkeley Pit and of Silver Bow Creek flowing next to it — a battered watercourse that received, for decades, the water pumped from the mines — is a 30-year epic, a tearjerker and page turner, a nail biter full of legal feints and lawsuits, broken promises and empty reassurances, settlements that were never quite enough, and resources reallocated like pieces jumping wildly across a chess board. Trying to read between the lines of court orders and settlements is damn near a full-time job. It takes an interpreter.

Butte resident Fritz Daily served as Butte’s representative in the Montana State Legislature for seven terms, from 1979 to 1995. These days, he also serves as a kind of area historian, a community conscience, a citizen advocate who has taken the health of his community to heart. He was representing the city when ARCO first shut off their pumps, and he was there before that when the Anaconda smelter ceased operations. “That shutdown resulted in a loss of about 3,200 jobs in Butte and Anaconda,” Daily said. “And then I was also serving in 1983 when ARCO closed the Berkeley Pit, ending the era of Butte mining as we knew it.” 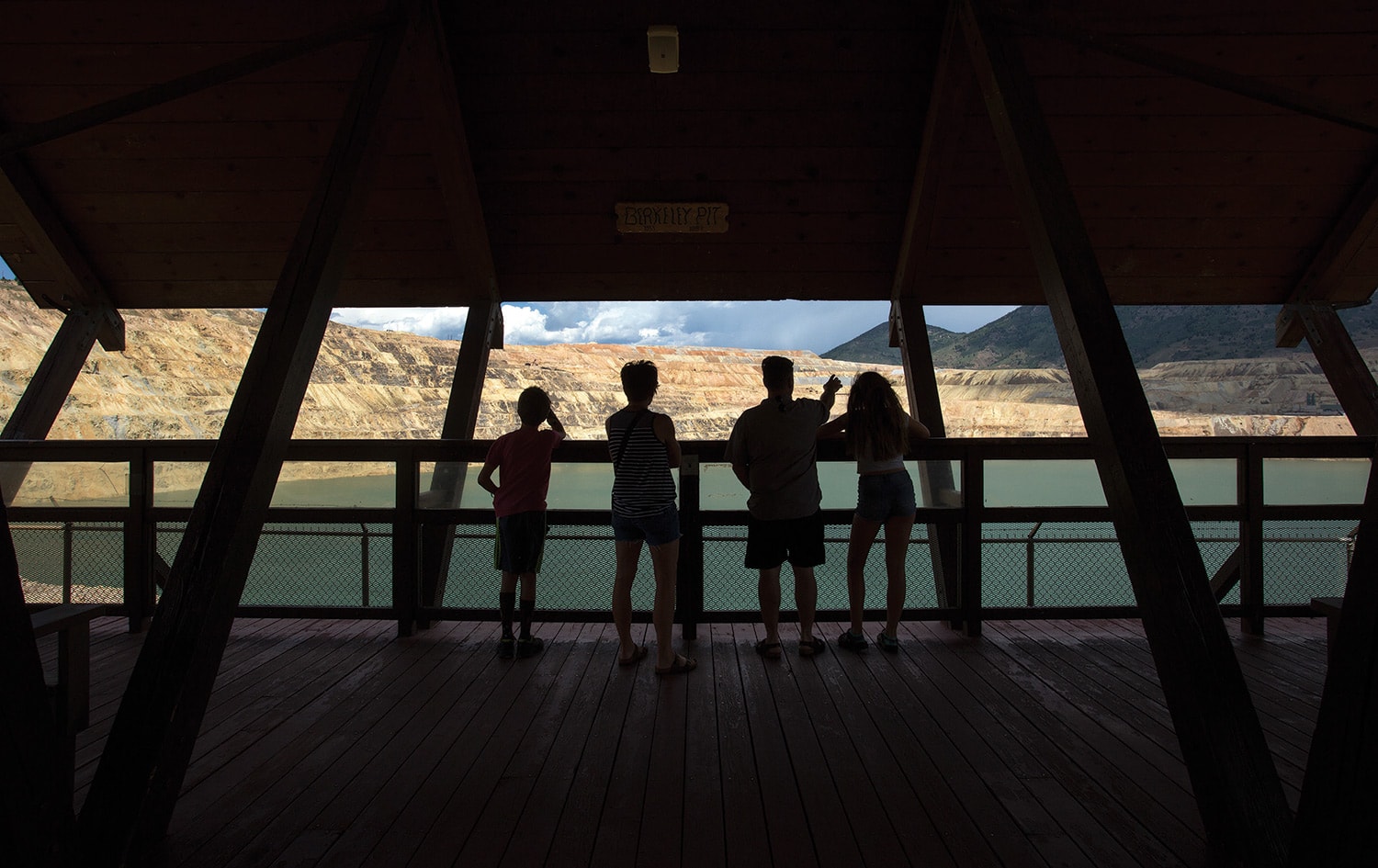 A viewing platform above the Berkeley Pit is open to the public; admission is $2.

Daily’s father worked for the Anaconda Company as a timekeeper, and both grandfathers made a living down in the mines. Daily himself worked in the pit, on the grease rack in the tire shop. “I did that while I was going to school in Dillon. That job’s what enabled me to go to college.” Since then, and now at 72 years old, Daily has given over most of his life to the well-being of his community. He taught accounting in a Butte high school, and then worked as a counselor in the elementary school system. “I belong to the Restore Our Creek group. I helped start that,” he said. “And I’m a member of what we call the Silver Bow Creek Headwaters Coalition. There are just three of us in that group — Ron Davis, Sister Mary Joe McDonald, and me.” He and the other members of this organization recently and successfully sued the State of Montana over the naming of Silver Bow Creek (turns out, it is, indeed, a creek), with the implication being that the nomenclature will help determine how the water is treated.

Montana attorney James Goetz worked with Daily and his cohorts in filing that lawsuit. “Fritz is totally dedicated to the people of Butte, the Butte community, and the environment,” Goetz said. “And he’s just been indefatigable in his work trying to make sure the Butte hill is protected, the tailings are removed, and the environment is clean. He’s said that when he was a kid, he would play in Silver Bow Creek. He has a long history of fighting for Butte. I really respect him.”

Daily has been around long enough to have cultivated a healthy skepticism, even distrust, of the organizations that hold the future of Butte in their hands. In conversation, he talks about the lawsuits he’s helped file over the years. “The only weapon we have, and it’s a sad commentary, is legal. Lawsuits are the only way we can resolve things that aren’t going to be in the best interests of the community,” he said. And he describes what he sees as an institutional prejudice against Butte. In talking about one of their recent lawsuits, and an early attempt at mediation, Daily said, “During our meetings, the anti-Butte mentality was just so prevalent.”

In February, Montana Resources (which operates the Continental mine — the only Butte mine still in operation) announced that it would begin, at the end of 2018 or the beginning of 2019, a pilot project pumping water from the Berkeley Pit. This is five years ahead of an earlier schedule. “Montana Resources,” Daily said, “is in the process of putting together a treatment plant that will hopefully stop the water from rising. But the water is only 42 feet and five years away from reaching the critical level. Five years. That’s the time frame that we have to address this issue. And hopefully, what Montana Resources is doing — and I trust Montana Resources, by the way; they live here and work here, too. I trust that what they’re doing is right — but again, keep it in mind. Five years isn’t a very long time.”

Daily said that Montana Resources is building an additional facility “to polish the water one more time. They believe it will meet state standards for discharge. And they’ve assured me that if the new polishing process doesn’t accomplish what they need to do, they will pursue other methods.” Remediation, Daily said, will come through lime precipitation. “It’s the cheapest form of treating contaminated mine water. The drawback is that it creates large volumes of sludge. And as a result that sludge needs to be stored, at some point, and in some place, in perpetuity. It’s just another contaminant. Right now, they’re using lime precipitation to treat the surface water, and then they put it right back into the pit.” 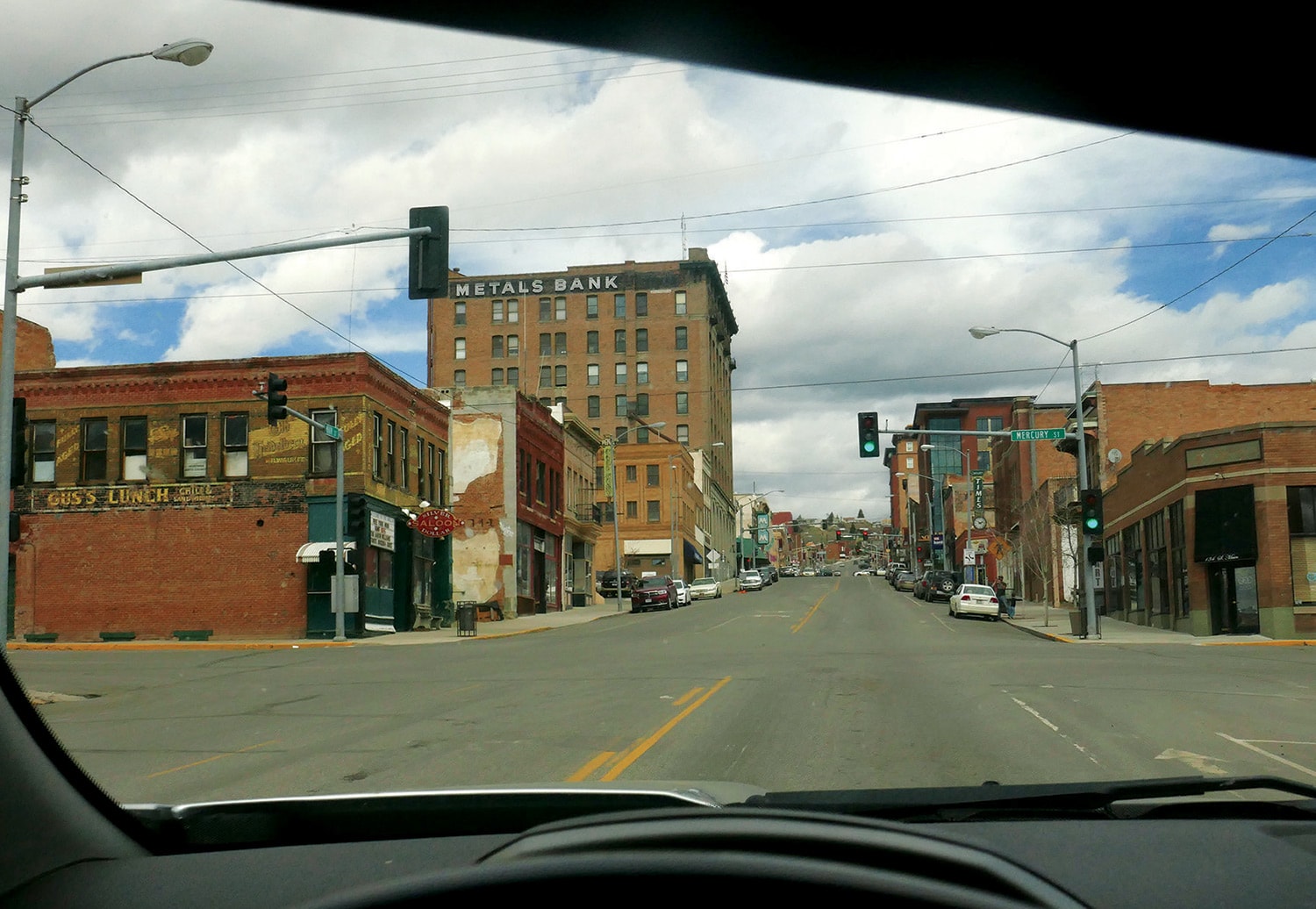 The city of Butte was built by mining. It now rests above almost 10,000 miles of slowly flooding tunnels.

Later, he added, “Keep in mind, no matter what happens from this point forward, even if everything stays the same, if water rises at the same rate, within five years that water will have to be pumped, treated, and discharged into Silver Bow Creek, in perpetuity. And perpetuity is a pretty long time.”

In his advocacy work on behalf of Butte, Daily has often felt that he and his cohorts have had to go it mostly alone. “What always puzzles me, in a way, is why the folks downstream from Butte haven’t been more active in addressing these issues. Whatever happens in Butte is going to happen all the way down the corridor. If there’s a discharge from the Berkeley, it’s going to cause contamination from here to Portland, Oregon.”

With effort, if you squint and remove it from context, the Berkeley Pit could almost be seen as a thing of beauty. Consider the telescoping symmetry of the roads and how they gradually diminish into the colorful, placid, plane of the water. And then there’s Butte itself. In a world that’s gone increasingly beige and homogenous, box store to box store, Butte has retained a fierce sense of its own character. Walking the tilted streets of Uptown Butte on a Saturday afternoon, you can’t help but be struck by how history keeps showing its knuckles. Ghost signs on brick and art deco neon. Storied bars and mine memorials and decommissioned brothels gone to restaurants. Whatever we’re missing in America these days — civic responsibility and a sense of community — it feels like Butte’s still got it in spades. But it’s also quiet. A fierce pride of place can’t quite alleviate a sense of waiting. “In the past,” Daily said, “Butte offered so many opportunities for young people. Anyone who wanted to live and stay in Butte could do that easily by going to work for the Anaconda Company. Miners, but also electricians, pipe fitters, carpenters. They were all good jobs. People could raise their family and live a good comfortable life here. But we’ve gone from a community of 70,000 people when I was younger to 34,000 people now.”

Daily sees himself as fighting on behalf of the 34,000 folks who remain. “While it appears at this point that the state is headed in the right direction, and hopefully the EPA, it hasn’t happened yet. I’m still skeptical because I’ve been involved so long and I’ve witnessed firsthand the incompetence. There is optimism, but for me it’s a very cautious optimism.”