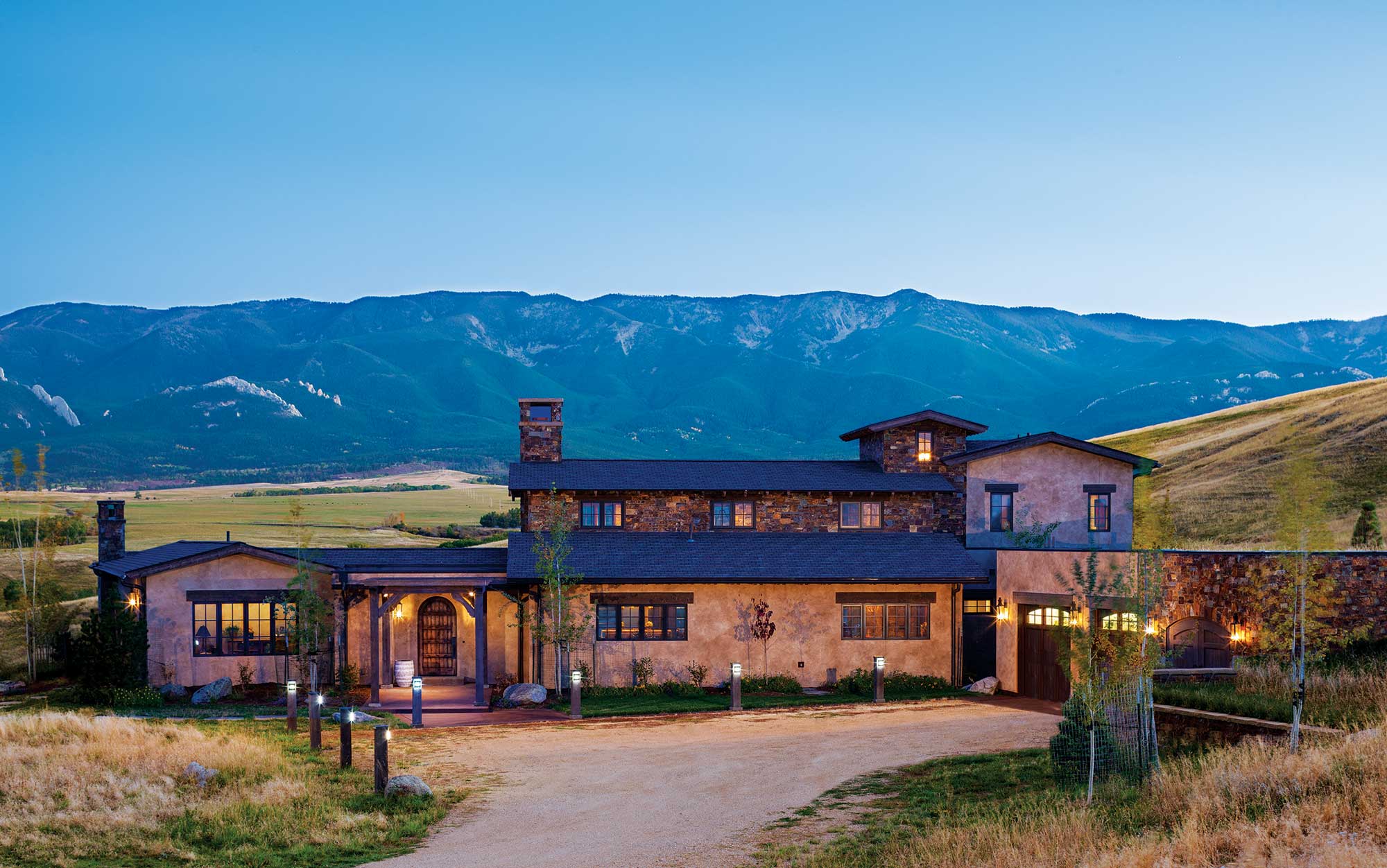 ON THE SLOPES OF THE BEARTOOTHS, nestled in open, rolling terrain below Red Lodge Mountain, a Tuscan-style home evokes the look of a refined farmhouse in the Italian countryside.

While on vacation to Yellowstone National Park some 10 years ago, Pamela and Mark Templeton bought their 40 acres near Red Lodge “on a whim.” With a glint in her eye, Pam said, “We built the house with the idea that it would be a vacation and retirement home.” But soon she decided to close her medical office in Indianapolis, Indiana, where she had practiced as an OB-GYN for 20 years, and they made the move to Montana.

Interior designer Jeff Morrison, of CTA Architects Engineers, collaborated closely with the Templetons, and described the project as the “first home that I’ve worked on that was true to the Tuscan style.” To help facilitate the work, Pam supplied reference materials, relying heavily on Aram Bassenian’s book, Tuscan and Andalusian Reflections, for inspiration. “There was great collaboration with Yellowstone Traditions, the contractor,” Morrison said. “They really understood the aesthetic of the home and captured the style … This home could have been built 200 years ago.”
The house mimics its surroundings, rising before the mountains in a geometry of straight lines. Faced with sun-baked plaster and braced with Chief Cliff stone (from west of Flathead Lake) and dark fir trusses, the low-pitched roof mirrors the peaks behind while a nearby grassy hillside almost seems to cascade over the structure. The garage, with a door reminiscent of a winery entrance, was intentionally built into the hillside. The rustic stone, in shades of brown and tan, provides a kind of natural warmth. Morrison said of the 6,000-square-foot house, “It feels like a very comfortable size.”

Inside the home, there are views to the outside from every room, beginning at the entrance foyer. Here, at the bend of the U-shaped structure, one’s eyes move straight past the pergola and patio to the distant peaks. But one is drawn quickly back in, and asked to either linger in Pam’s sitting sanctuary or to venture into the great room, toward the guest wing.

Pam’s Mason & Hamlin baby grand piano, a gift from her husband 30 years ago when she was pregnant with their son, Ross, lures the visitor into the public area. In this space the craftsmanship of the Yellowstone Traditions team (Charles Bunney was the superintendent) is evident. A floor-to-eaves stone fireplace anchors the room under a fir-beamed ceiling.
An intimate kitchen is tucked off next to the dining room. Both rooms showcase dark wood cabinetry crafted from Iowa bridge planks previously stored at Mark’s parents’ farm and moved to Montana in a U-Haul by the Templetons. The kitchen is adorned with ceramic mosaic tile and hammered copper. Floral ceramic tiles frame the backsplash for the six-burner Thermador gas range. But the most enchanting space may be the hallway between two pantries, well-lit even into the crevices of the arched ceiling.

The nearby powder room contains a vanity with inlaid leather — one of the many custom-built pieces from Yellowstone Traditions. Bunney said, “We have our own door-and-cabinet shop. We build what our clients want us to build.” Within the Templeton’s home, perhaps the signature indicator of Bunney’s attention to detail is a stone laid into the wall of the bunkroom on the second level of the guest wing. “I walked by the rocks the masons had already rejected, and saw the image of Montana,” he said.
It was an appropriately sentimental choice. And the sentimentality extends into a bedroom, lined with wood from the family farm and containing Mark’s grandfather’s saddle and a pair of Raggedy Ann and Andy dolls from yesteryear. In this wing, the Templeton’s son and his wife, Rebecca, and their daughter, Chelsea, can comfortably visit, spreading out through the television room, two and a half baths, and three guest bedrooms.

The masterpiece of the Templeton house is the owners’ wing. A long vestibule is accented with stained glass windows created by Der Glass Werks (owned by Kerry and Marianne Byrne in Indianapolis), while intricate travertine stonework and mosaic tiles pave the long hallway and the steps down into the master bedroom.

The spacious master closet contains a center island with room for folding clothes. Through the closet, the master bath has a glassed shower stall big enough to accommodate two and a soaking tub area crowned with dark, arched wood beams. Artful patterns of tile alternate between large squares in straight rows in the shower and quarter-sized squares in the arch above the double sinks. And the master bedroom, although it’s on the ground floor, seems to perch above the world; windows on three sides provide vistas to the guest wing and beyond.

This is the sweet life in Red Lodge — a bella Tuscan home in the foothills of Montana’s Beartooth Mountains. 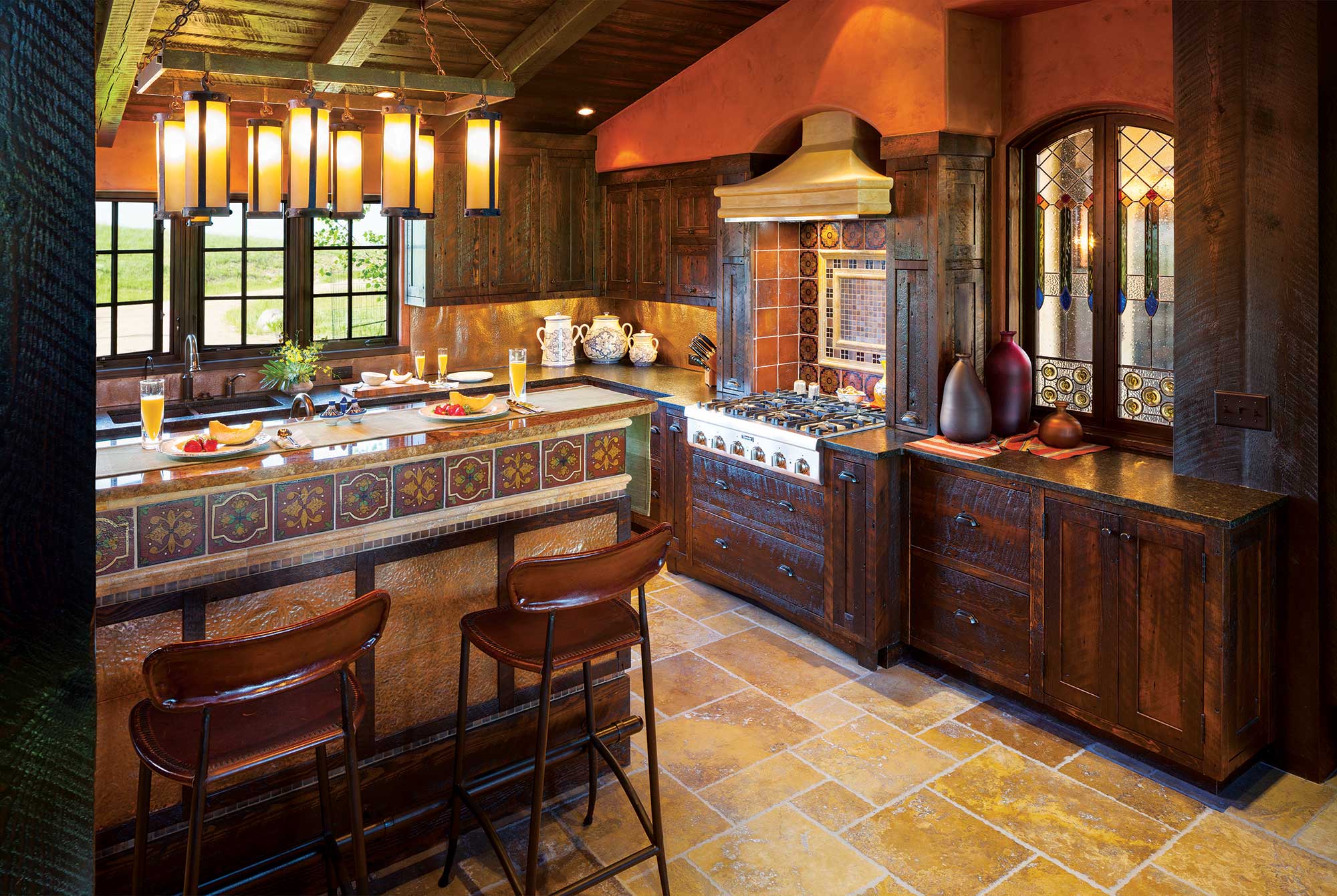 The rustic kitchen, with dark wood cabinetry from Iowa bridge planks, is accented by ceramic mosaic tiles and hammered copper. 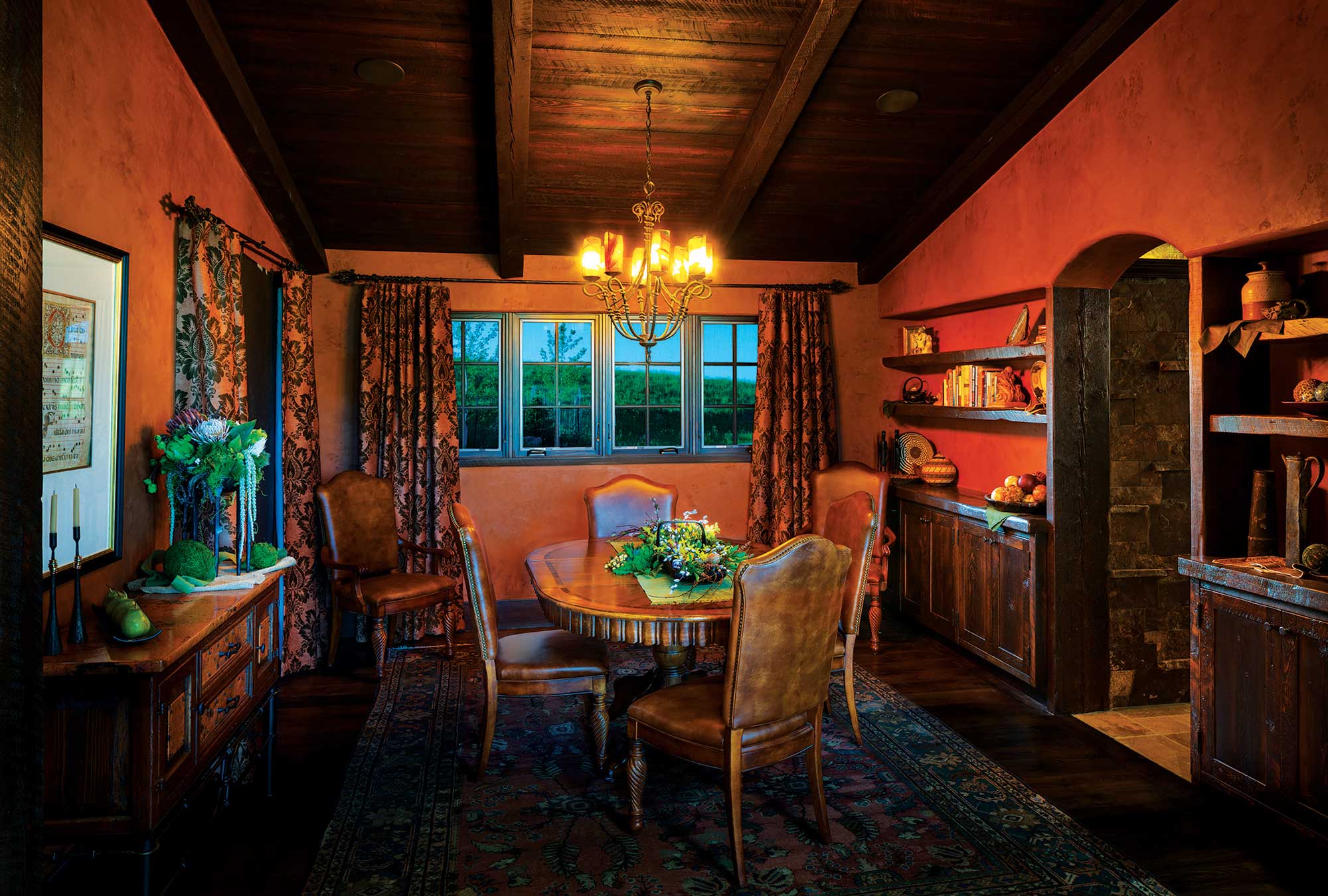 Plaster walls, wood ceiling, and cabinets constructed from planks from the family farm provide intimacy in the dining room. 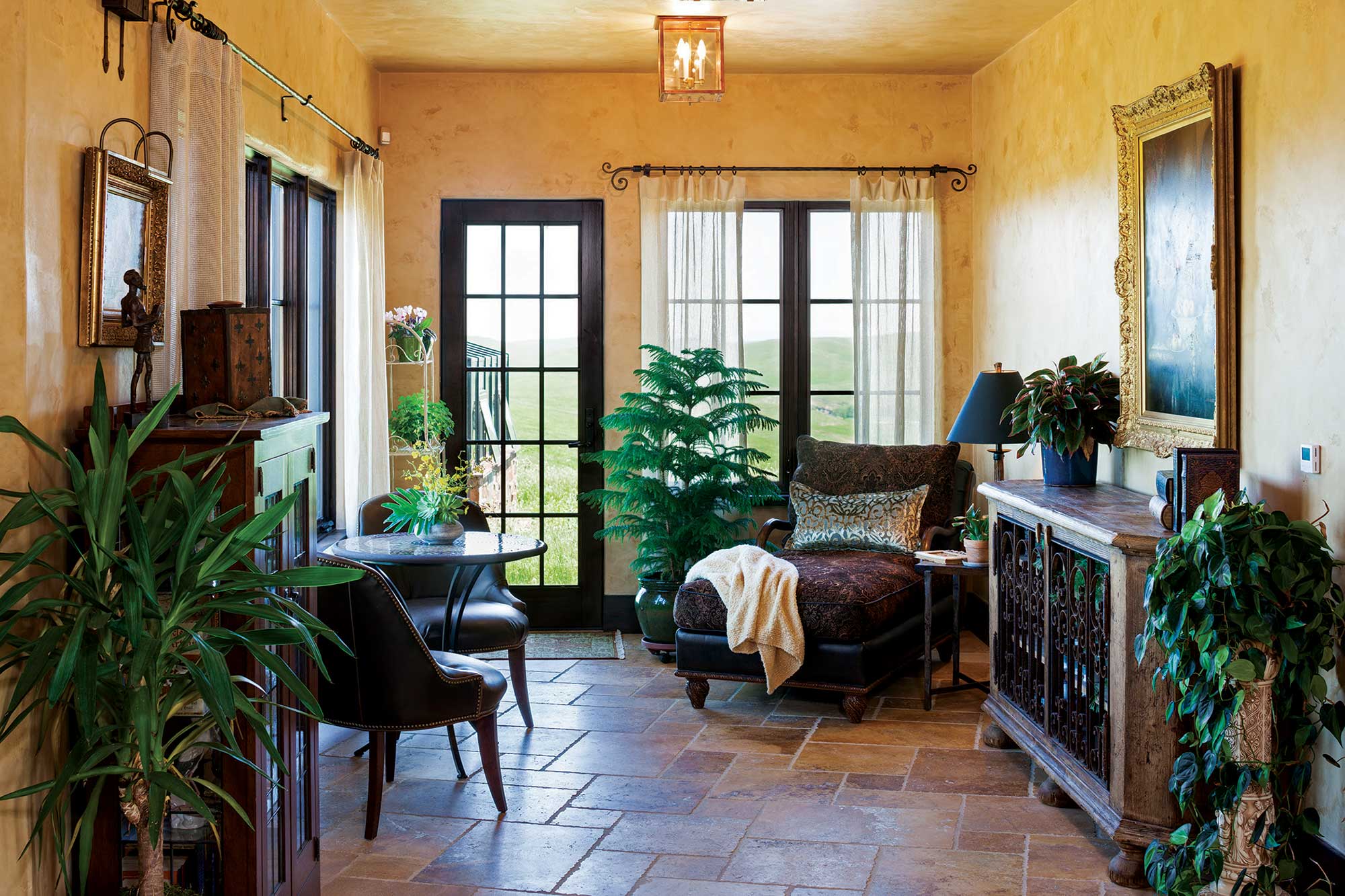 A sitting area welcomes visitors with warm light and views to the outside. 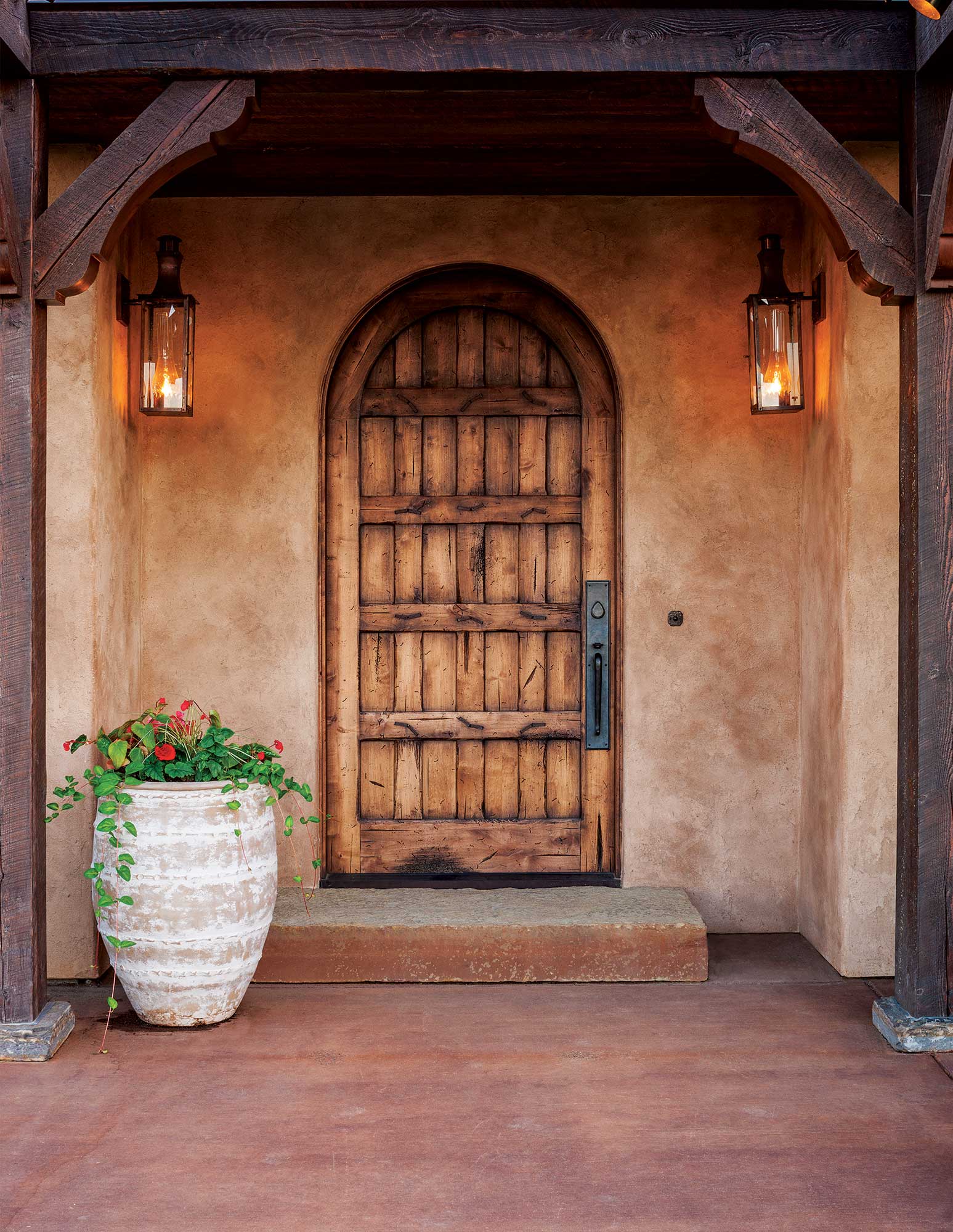 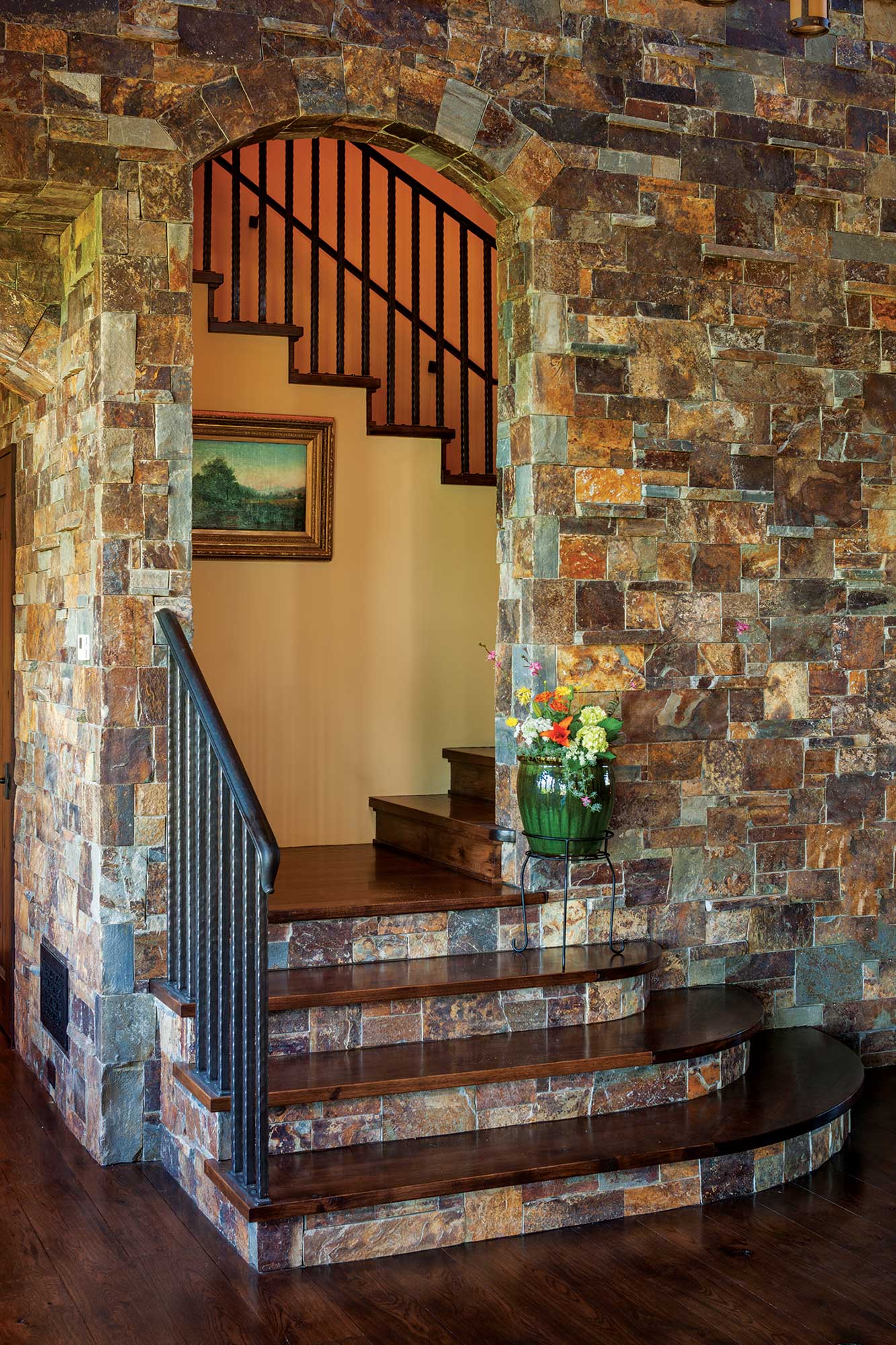 Chief Cliff stone forms the grand alcove leading up to the guest area. 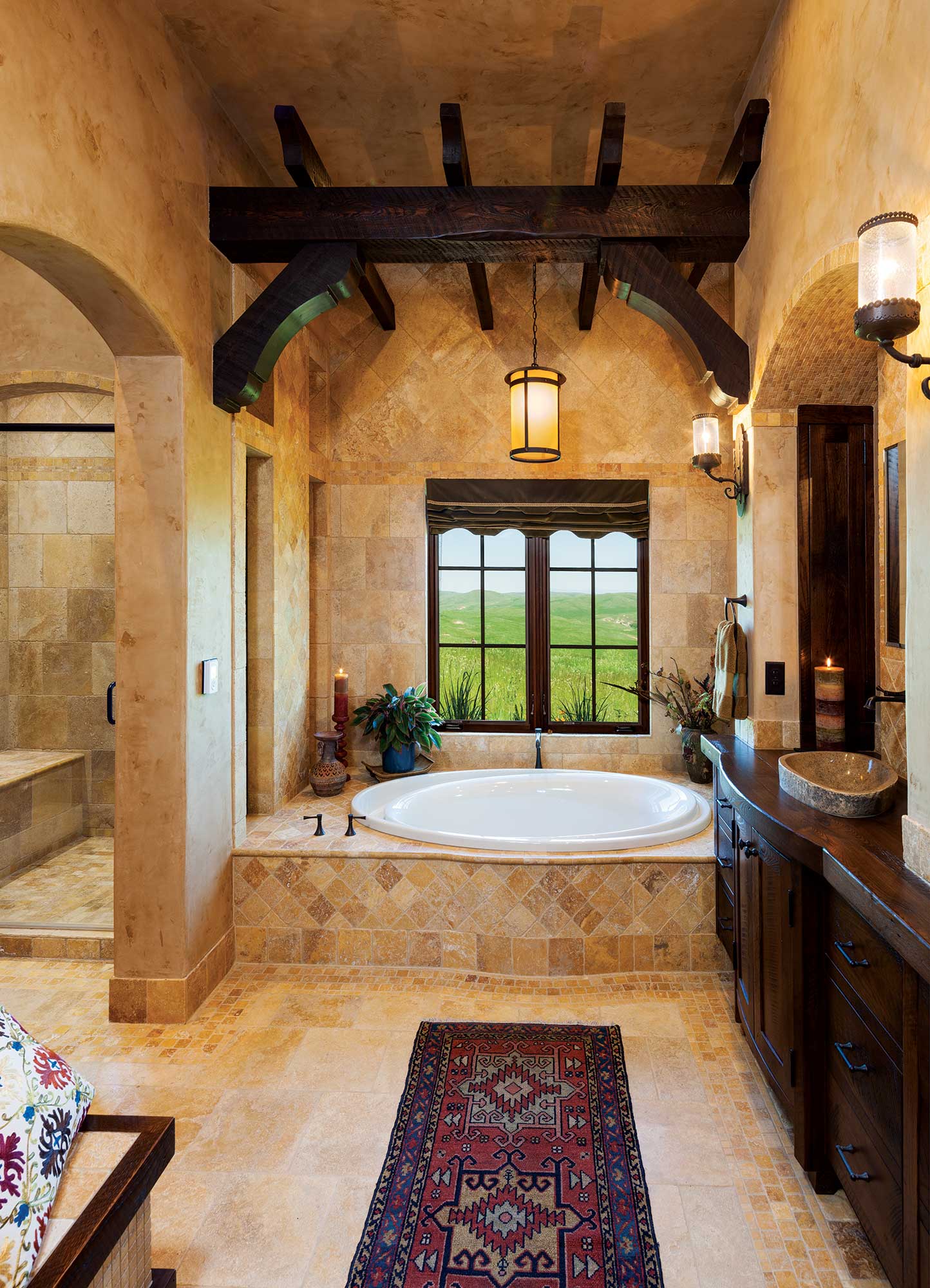 The master bath is a masterpiece of the Templeton home, crowned with dark wood beams and patterned in travertine. 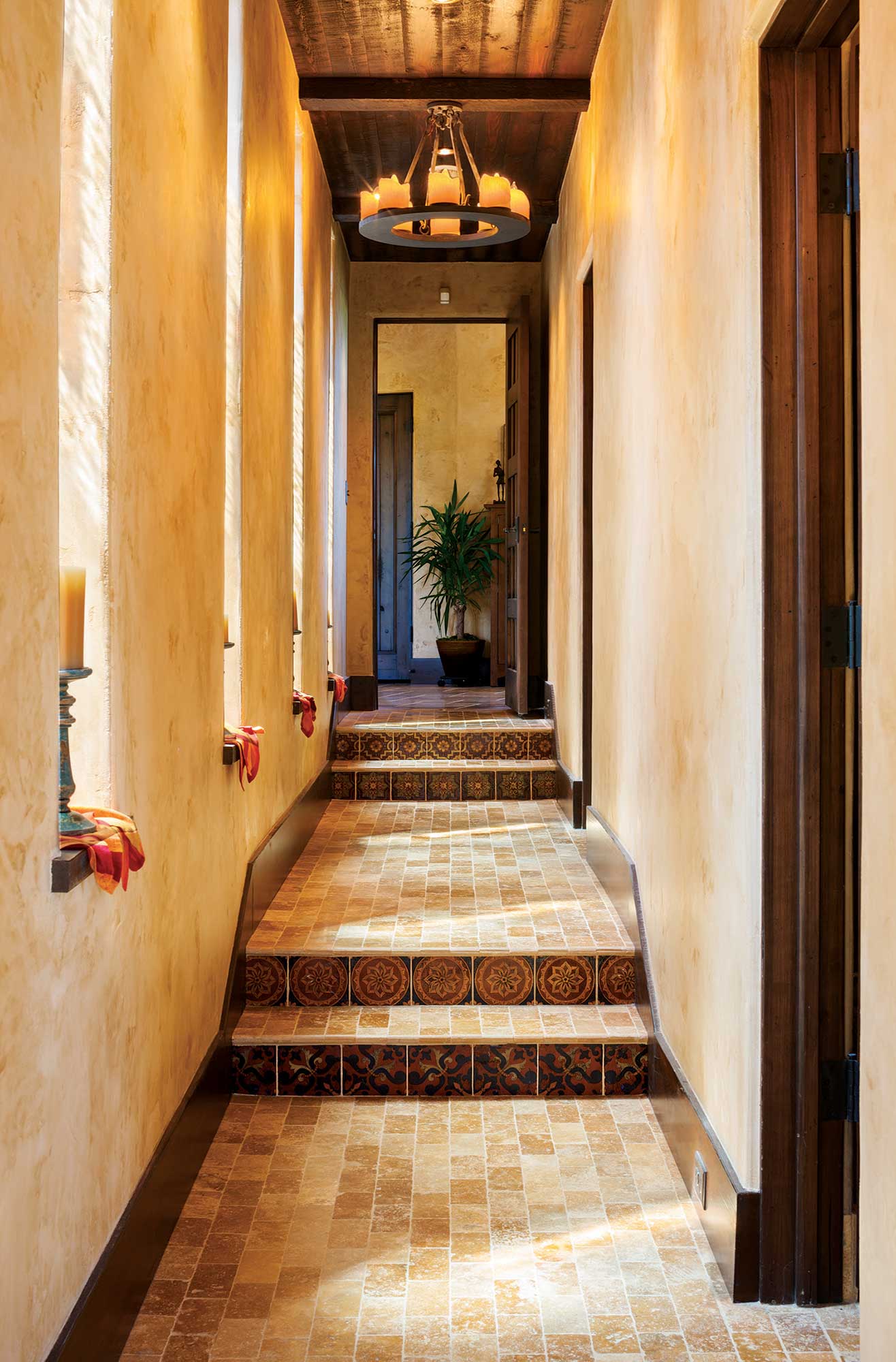 The long vestibule, accented with stained glass windows, leads to the master bedroom. 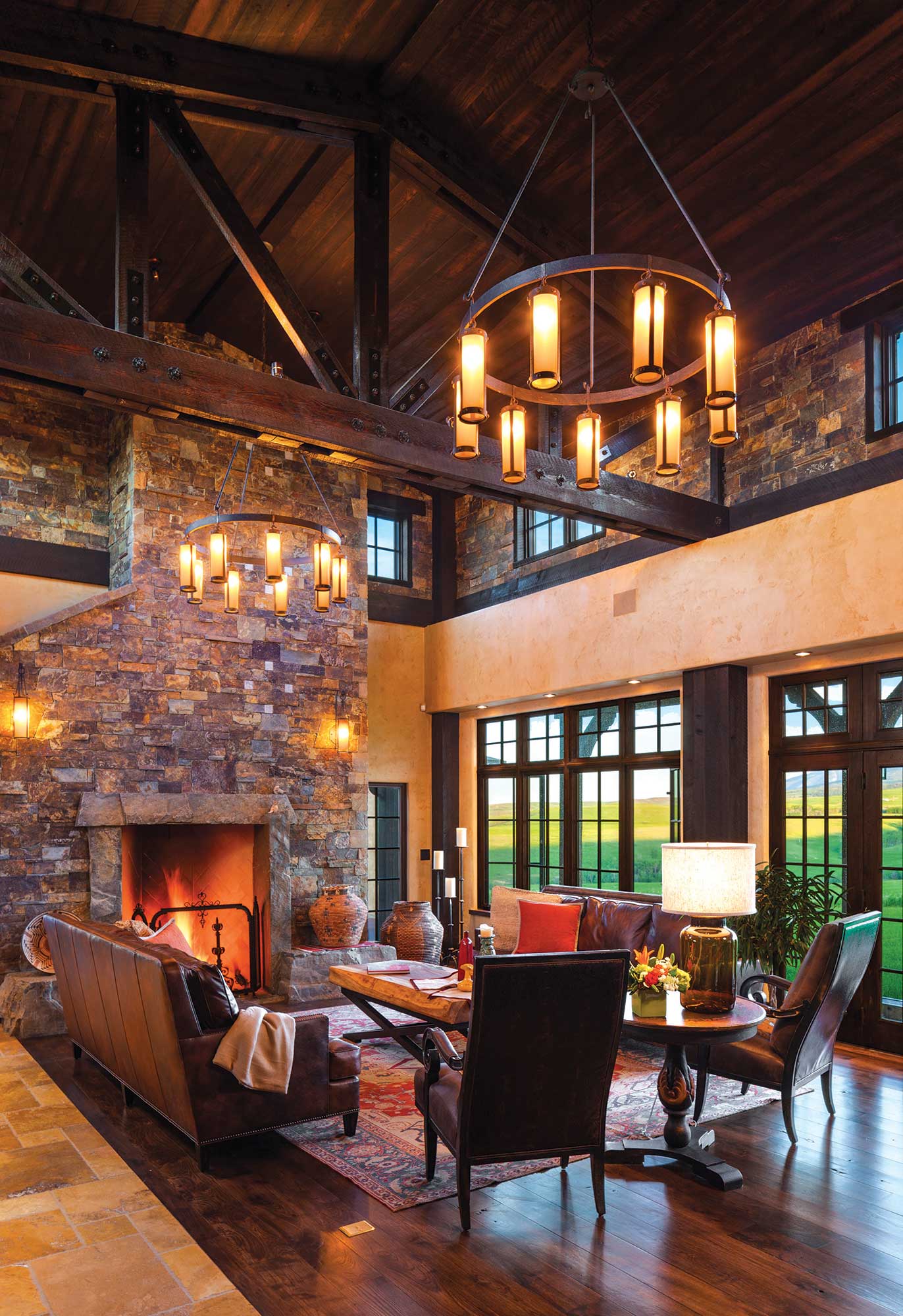 The great room features a floor to eaves fireplace and fir-beamed ceiling. 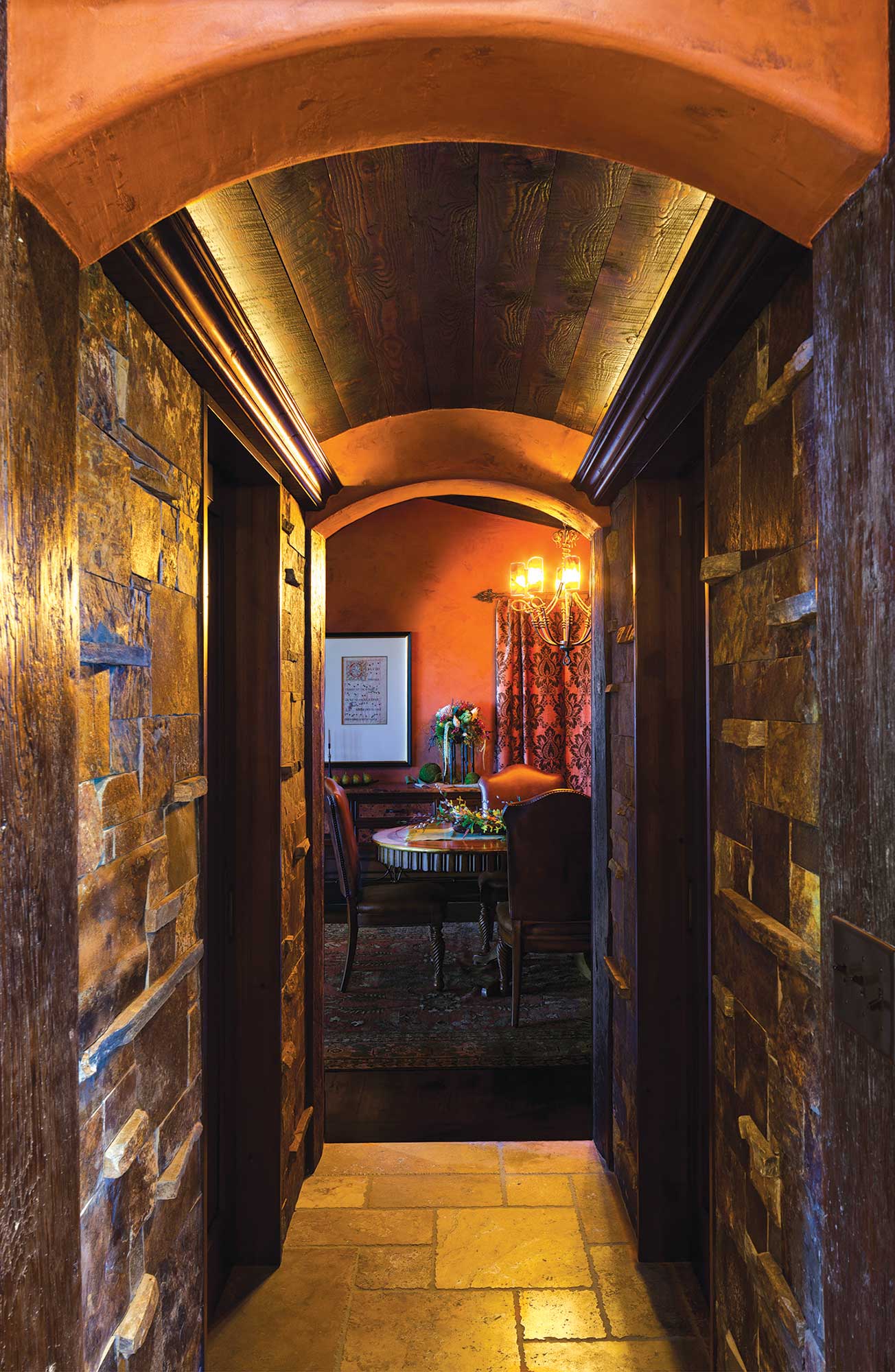 The arched hallway, flanked by pantries, leads from the kitchen to the dining room. 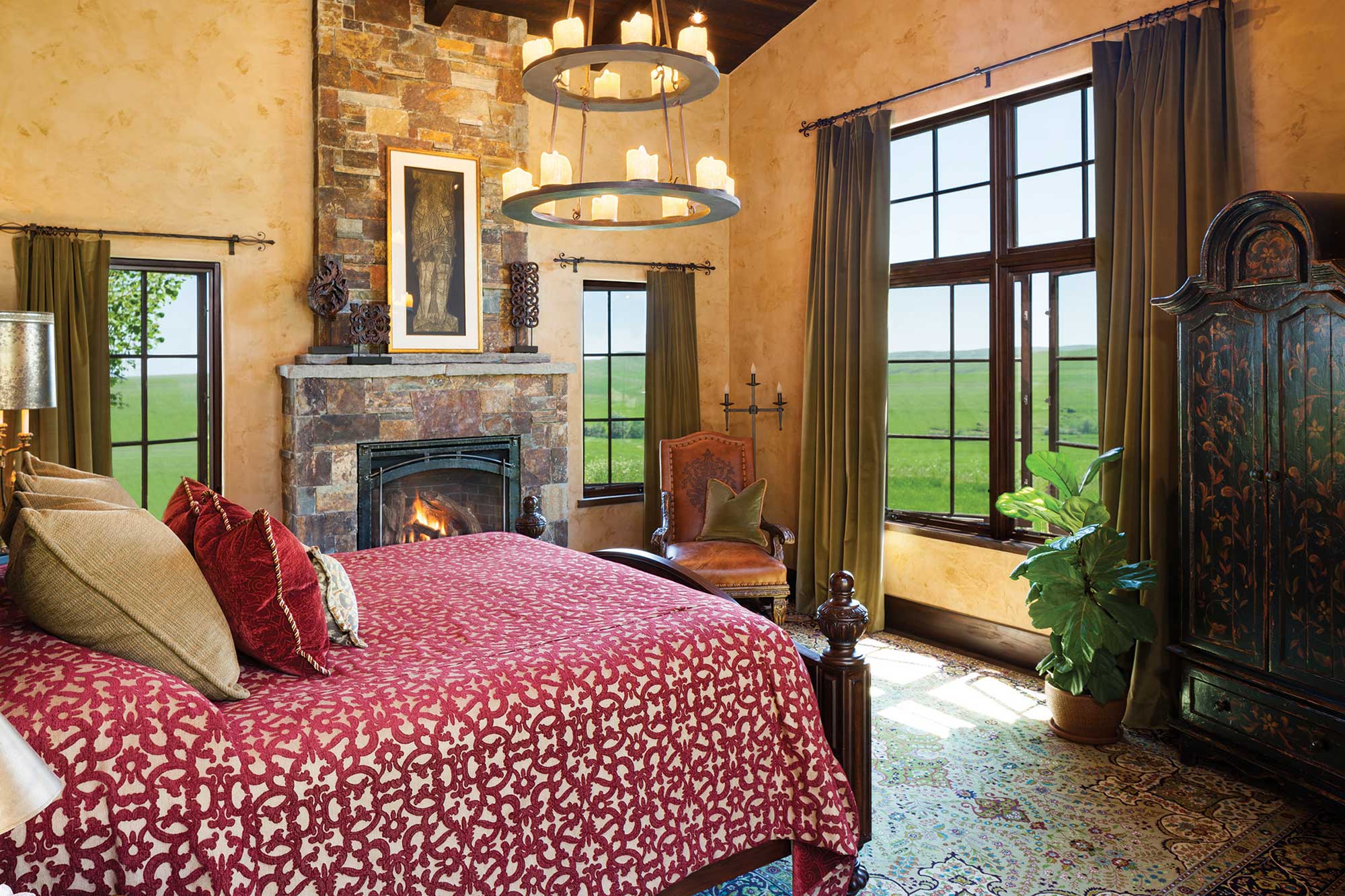 With windows on three sides, the master bedroom seems to perch above the landscape. 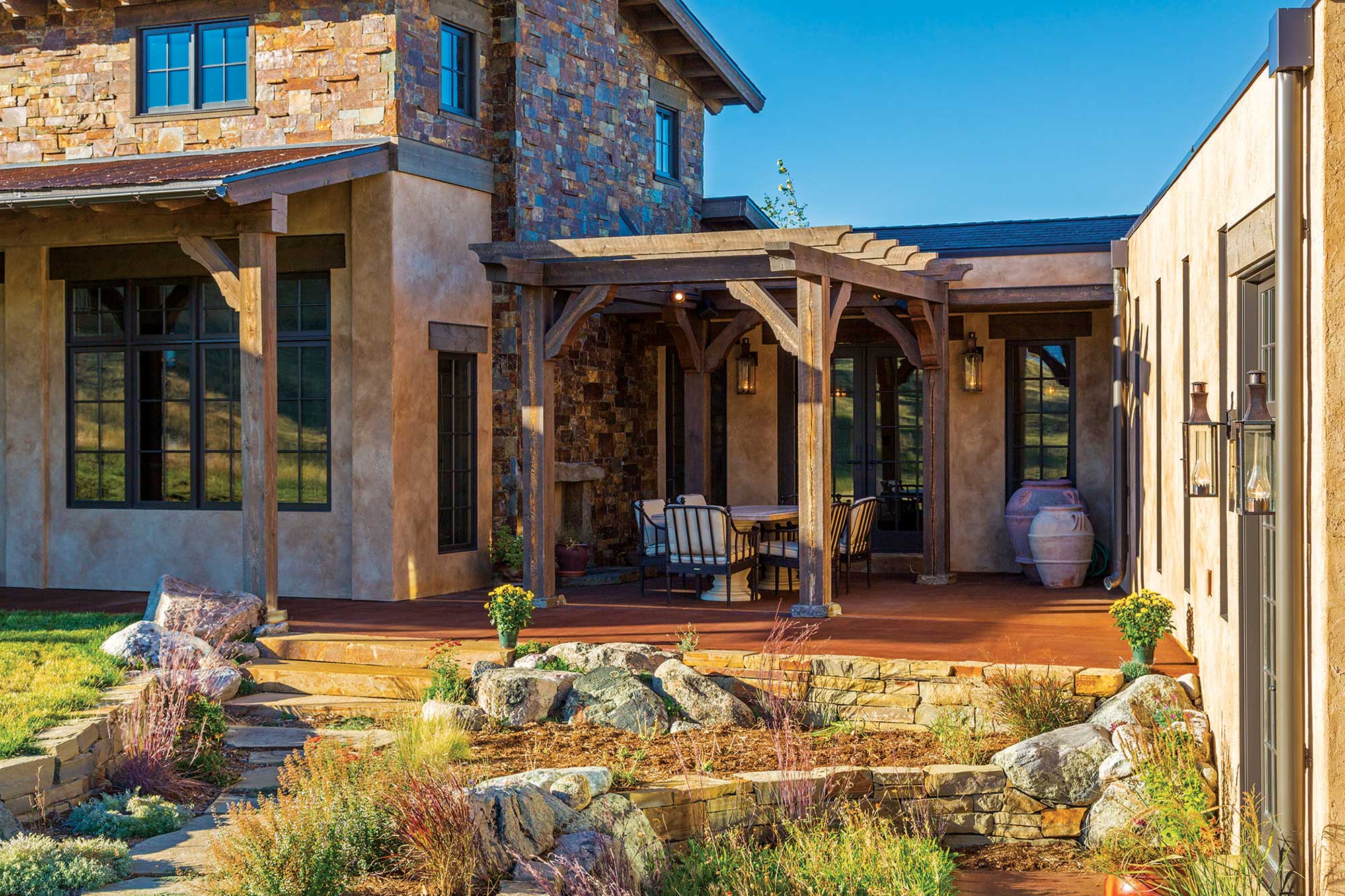 The pergola and patio, warmed by a fireplace, offer a place to entertain and enjoy the views.