THE SUN IS JUST UP BEHIND THE BRIDGER MOUNTAINS, and cold engines rev and settle into a rumbling chorus. Packed into the hotel parking lot are Ferraris, Porsches, Jaguars, Corvettes and Mercedes-Benzes of varied vintage and horsepower. If you knew what you were looking for, you’d also see a 1966 AC Cobra, 1954 Bentley Special, 1965 Sunbeam Tiger, 1963 Studebaker Avanti, and one of the last remaining 208S Siatas on the road, a 1953. Hoods and doors slam, people laugh and shout, and a bagpiper stands shivering in her kilt ready to send us off. It’s the first day of the 6th annual Going to the Sun Rally (GTTSR), with 286 beautiful miles between Bozeman and Jackson to cover on today’s drive. Forty racy cars (and a cheerful 1940 Plymouth Woody) jostle into loose order to head out. Parade formation isn’t in the personality of this event, and as soon as they’re free of the lot the cars disperse. Over the next five days they’ll cruise about 1,300 miles from Bozeman, to Jackson, to Sun Valley, to Missoula, and back to Bozeman, all on two-lane roads, without a single interstate inch. In the cars are ralliers from all over the country — lots of husband and wife teams, some fathers and sons, one lucky young daughter, and a number of buddies traveling together (“you can talk about cars all day and no one gets mad”).

The Going to the Sun Rally, which follows a different route each year, is a touring event, not a race. No times are kept, no competitions held. More than anything, it’s a rolling social. This does not, however, preclude a certain amount of speed when the road beckons. Drivers fan out along the route, or travel in zoomy little caravans accelerating into the curves and shifting into their top gears on the straightaways. But there’s no prize for getting anywhere first. It’s all for fun and camaraderie, and charity. So far the rally has raised some $300,000 for a variety of Montana causes, including the Montana Highway Patrol Fallen Officer’s Fund, Red Lodge Vo-Tech Program, VA Voluntary Service, Blackfeet Community College and Big Brothers-Big Sisters of Park County. In classic Rocky Mountain style, the idea bubbled up one day over lunch on the ski hill when Farnum Alston was showing “baby pictures” of his vintage Jaguar to long-time friends Jim Sitton and Kenny Williams.

“It seemed like a great way to share our love of Montana and its people, and use the power of a car rally to do good,” Alston explains. With his daughter along as navigator this year, he is driving a 1961 Jaguar MK II 3.8 that smells faintly of old wool coats from the overhead upholstery. That first event drew 27 entries, but as they climbed the Beartooth Highway, the vintage cars — including open two-seaters — encountered mist, sleet, hail, snow, and road construction. Still, most of those drivers were back the following year, and they’re still coming back. Sitton, who is driving a 1956 Jaguar XK 140 Roadster with his wife Chris, says it always feels like a reunion. “We step into each other’s lives for a week. There have been births, deaths, illnesses. We carry that all year.”

And it beats going out to dinner as a way to get together with friends, rallier Heidi Gildred says. I have caught a ride out of Bozeman with Gildred, who lives in the Madison Valley with her husband Ted. With no power steering in their white 1965 Shelby GT-350, she wrestles the wooden steering wheel through the turns of Beartrap Canyon. Her father was a friend of car legend Carroll Shelby, and she used to race vintage cars.

Judging by the car talk that swirls over fine wine in the evenings, rally people appear to share an inherited automotive gene. Cars show up as often in their family histories as they do in their garages. If you aren’t born with the gene, it’s possible to acquire it. Jeanne Gabiati, who rides with her husband Ernie in a turquoise 1956 Jaguar XK 140 OTS, threw up the first time Ernie pushed the car to well over 100 mph. Now she talks about that amazing feeling when a car “settles in” at speed.

To qualify for a slot on the GTTSR, a car must date from 1971 or earlier, an era of carburetors, distributors and wing vents. Rally mechanic Greg Lerback says it doesn’t matter if a car from that period is Italian, British, or American, or whether it’s worth $50,000 or a few million, they all operate on the same principles. Given enough time and the right parts, he can usually figure it out.

Gildred and I zip past Ennis Lake and she muscles the GT into the Madison Valley Hospital, an annual rally beneficiary, where volunteers have put out coffee and scones. Townspeople turn out to see the cars, some pulling into the gravel lot in their own restored cars and trucks to pop the hood and swap stories.

Sun glints off immaculate paint jobs as the cars resume the ride up the Madison Valley, over the Continental Divide, past Henrys Lake, through the trees on the Mesa Falls Scenic Byway, and out through the wheat and potato fields, steaming for Teton Pass in grand view of the sculpted western side of the Tetons. Later that evening on the sun-drenched deck at Jackson Lake Lodge, marveling at the dominating front-side Teton view while bald eagles soar overhead, ralliers are in high spirits. Most are from out-of-state: Arizona, California, Illinois, Wisconsin, Tennessee, Maryland, Connecticut, New York, Indiana and Missouri. They come, they say, because they appreciate the roads and renewed friendships — and because the scenery bowls them over.

In the morning people gather for breakfast and the road report presented by rally volunteer and Montana Highway Patrol Captain Brad Sangray. I jump at an invitation to ride in the Woody. Fully restored with the original honey-colored wood, it’s like riding in an old home movie. The car belongs to Pam Rentschler, from Cameron, Mont., and was a gift from her late husband Fred. Pam and family friend Shawn Bowers are running the trip in his honor. It doesn’t take long on the GTTSR to understand that each car is a story within a story. The windows are open to the sunny day and we have ear plugs in against the roar of the replacement Chevy V8, thinking our own thoughts, cruising through the black, humped-up lava plains of Craters of the Moon. A mirage flows across the road, always just ahead.

And so the rally goes for the next few days, mile after curving, cresting mile. The last day, September 11, is bluebird-perfect, with crisp air, warm sun, early snow in the peaks, and empty rural roads racing past rabbit brush and sage, skimming over rivers, and rolling through fields of green alfalfa and toast-colored wheat. Fort Harrison near Helena, a National Guard post with a VA hospital, is the last scheduled stop. The rally had invited Montana National Guard Staff Sergeant John Bennett to come along for the ride this year and draw the winning raffle ticket for a 1982 collector’s edition Corvette. (Rallier Jim Edwards donated the car for a special “Vettes4Vets” raffle to bring attention and extra money to the needs of disabled veterans.) I rode with Bennett one afternoon in his 1968 Camaro Z28, which is modified with hand controls. When he punches it, the blue fuzzy dice looped over the rearview mirror bump against the handicapped hang-tag. Since being shot by a sniper in Iraq in 2005, Bennett and his wife Dena have worked tirelessly on behalf of wounded veterans.

As they pull in, the rally cars park in a line along a street on the base. Like always, a crowd gathers to admire the cars, talk about cars, lament over lost car loves, and lean down into the cars to take stock. After lunch Bennett is presented with a quilt made by servicemen and women, and the group of Guardsmen he served with in Iraq stands to be recognized by Montana Governor Brian Schweitzer. On many levels, cars have defined freedom for the people in this crowd, and surely more than a few of them are thinking about the way Bennett embodies that simple, complicated notion. Bennett draws the winning ticket and the lucky winner is from Eureka, Mont. He happens to be a veteran. Everyone cheers.

From Fort Harrison it’s a fast, glorious drive the rest of the way to Bozeman, turning east at Townsend to zip through the Big Belts, heading south at the Crazies, and sneaking back up on town through Bridger Canyon to arrive sunburned and ecstatic.

The mood carries over into the late afternoon as ralliers begin to load their happy (they swear) cars into big enclosed trailers for transport back to their own cities and towns. A lucky handful — the Woody, Z28, and Shelby GT included — get to just drive the rest of the way home, humming from the miles, with one more chapter to their stories. It’s all about the ride.

Editor’s Note: See goingtothesunrally.org for more information, including a list of sponsors and photo archives. 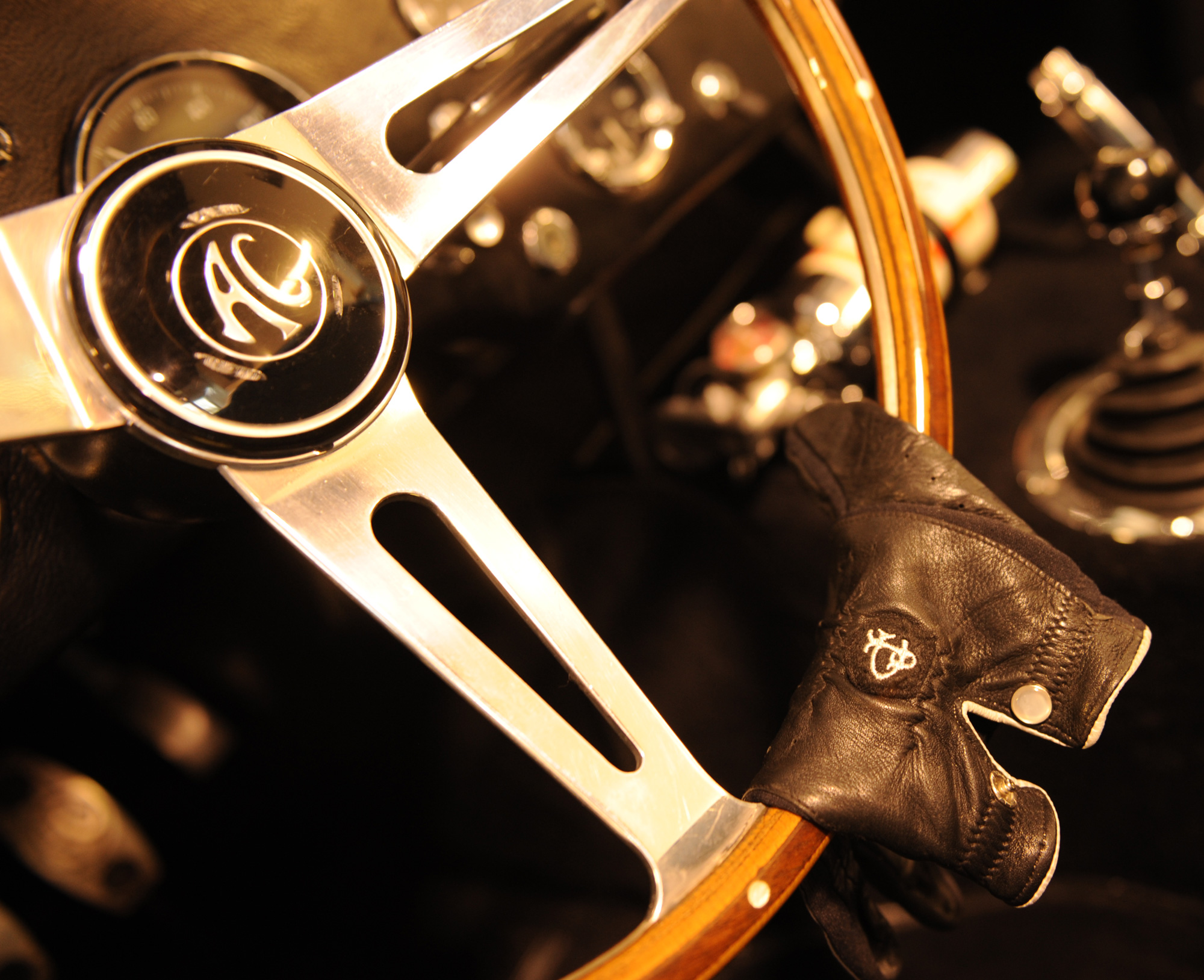 Classic details. Photo by Will Brewster 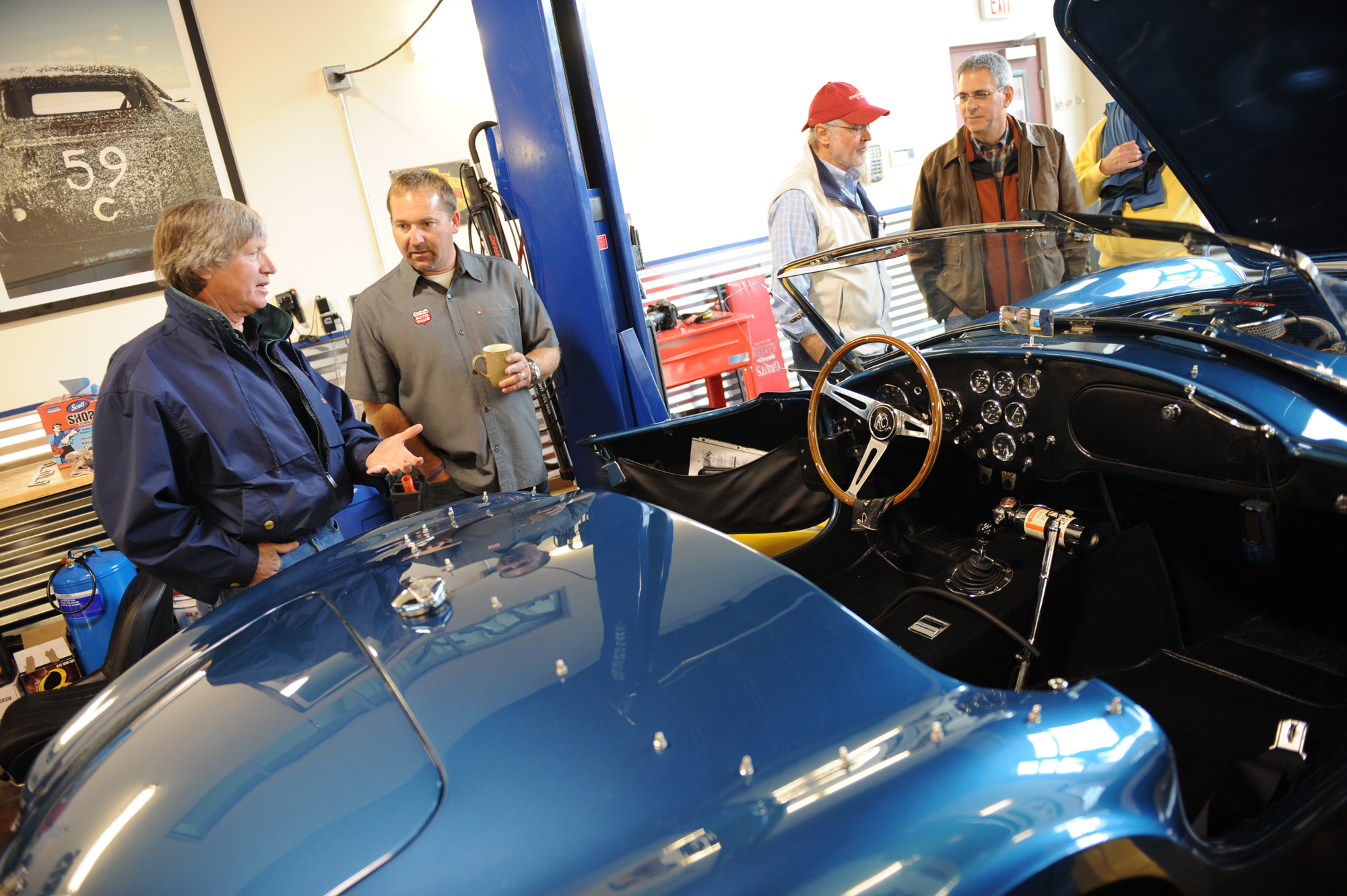 Talking shop at a car club stop. Photo by Will Brewster 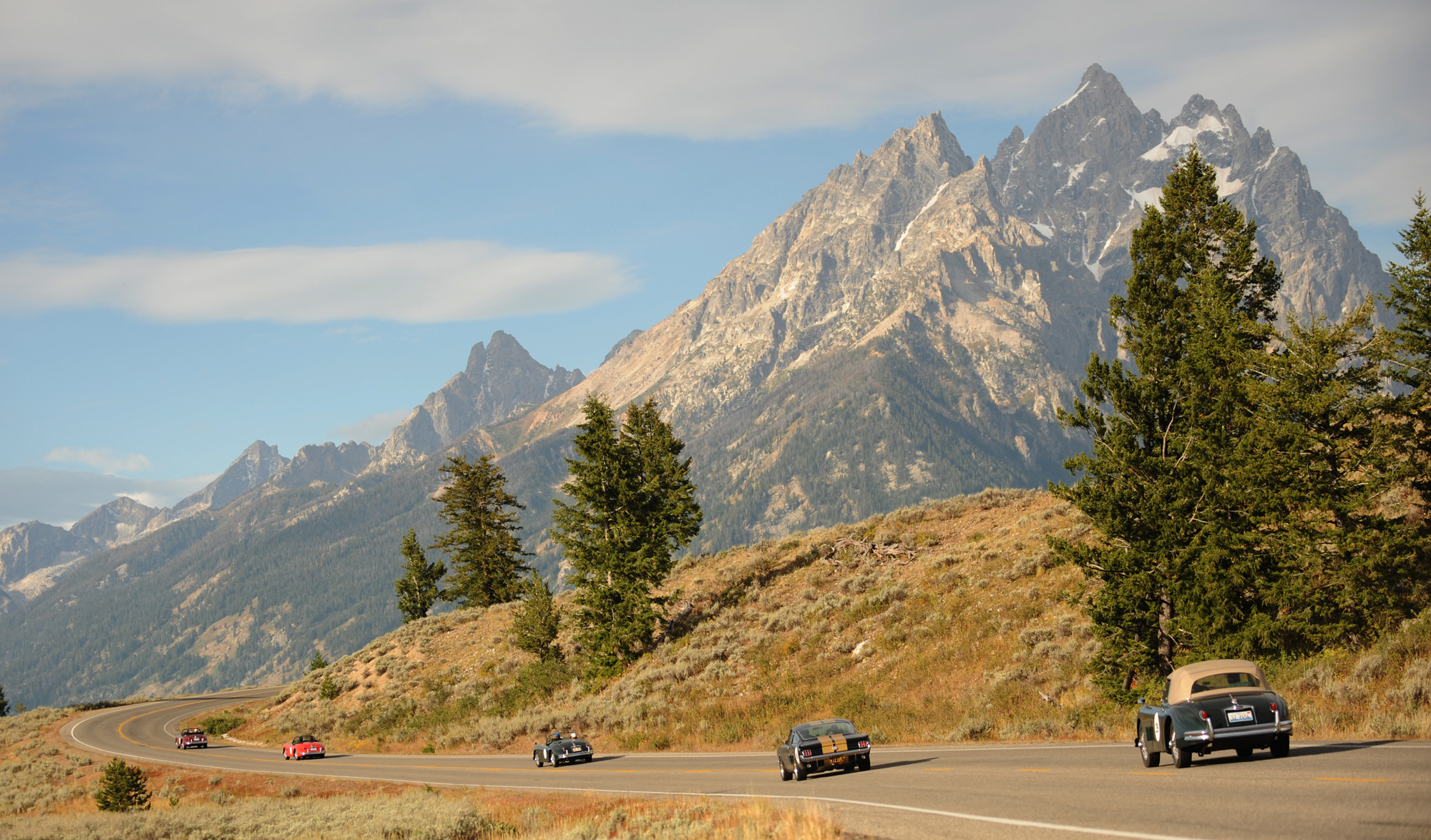 With 1300 miles of backroads bliss, everybody wins. Photo by Will Brewster

1963 Avanti R2, not your father’s Studebaker. Photo by Will Brewster