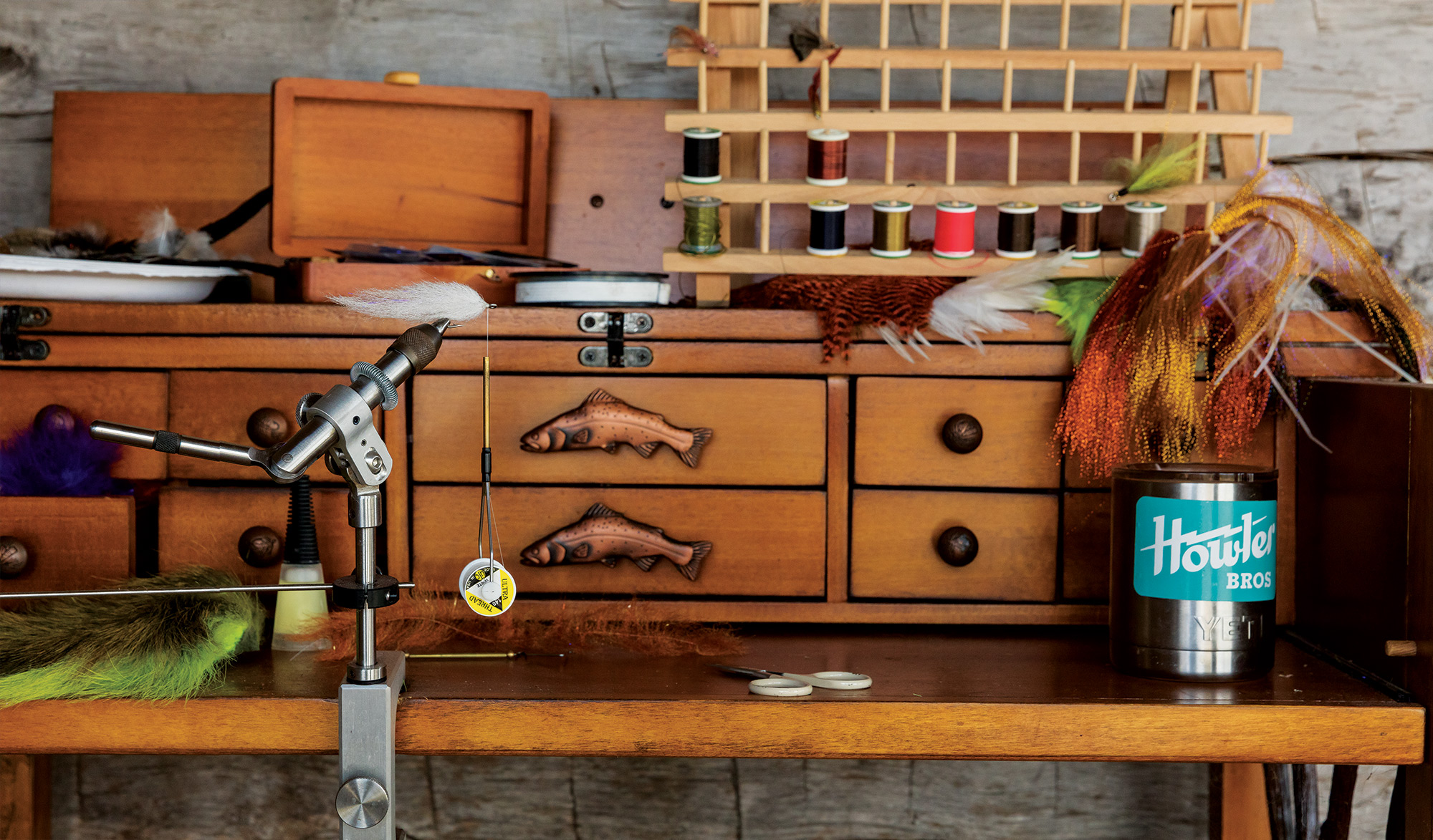 16 Feb Artists on the Hook

The Fat Albert by Brent Taylor

THE FAT ALBERT WAS NOT ONLY Brent Taylor’s ticket to fly-tying fame: A couple dozen of the beloved Western hopper imitations got him a date with his future wife.

A veteran Dillon, Montana-based fishing guide, Taylor — who also guides each year in Chile — was rowing the lower Gallatin River early one morning when he asked a wading female angler what type of fly she was using. “Tan Fat Albert,” she replied. Taylor beamed: “You just made my day,” he said, failing to mention that he had designed the fly, along with half a dozen other patterns, for the Columbia Falls-based Montana Fly Company.

Preferring large trout to small talk, the future Mrs. Jen Taylor focused on the handsome riffle corner upstream and strode out of sight with a wave and an over-the-shoulder “Good luck!” More than a bit intrigued, Taylor anchored his boat, excused himself from his clients, and hustled upriver in pursuit, ultimately handing a pile of Fat Alberts and his phone number to the pretty young lass saying, “I know the guy who made these.” It wasn’t until bird season, but she finally did call; Brent and Jen married three years later.

While Taylor originally designed the Fat Albert in Chilean Patagonia to imitate the prehistorically-sized Cantaria beetle (whose pincers alone can measure 3 inches), the pattern has become one of Montana anglers’ favored terrestrial imitations for its versatility, visibility, and durability. Made almost entirely of foam (excepting its hi-vis post), the virtually unsinkable fly can be tied in countless variations, such as black to imitate a cricket or small beetle, tan or pink to mimic a grasshopper, or lime-yellow to pose as a Sally fly. The low profile Albert sits in the water’s film much like the ever prevalent — but rarely seen — nocturnal stonefly, and can be dead-drifted, twitched, or stripped spastically to suggest an ovipositing crane fly.

Despite his success with the Fat Albert’s lasting popularity (the fly has been one of Montana Fly Company’s best sellers since Taylor designed it in 2001), the fly tyer has continued to expand his portfolio, offering several other cataloged patterns, most notably Taylor’s October caddis larva, a new-fangled version of the centuries-old partridge and orange that features a body of translucent orange ribbing coupled with hare’s ear dubbing and Hungarian partridge soft-hackle, the perfect blend of natural and synthetic materials.

Taylor says he designed the fall caddis imitation because soft hackles are easy for clients to fish, “down-and-across and on the swing,” and because he was looking for a way to employ the feathers he plucked from Hungarian partridges he and Jen had shot over their Llewellin setters one fall. “Tying with synthetics is fun, but dogs don’t point foam.” •

The Home Invader by Doug McKnight

Every fly tyer who tinkers with patterns knows there is nothing that fuels the process like immediate success with a new fly. Fly designer Doug McKnight first tied on the original version of his Home Invader streamer in the mid-1990s, when he was splitting his fishing time between smallmouth bass on the Delaware and trout in spring creeks in the Cumberland Valley of Pennsylvania (“Where I mostly had permission to fish,” he says). McKnight tells the story that on the fly’s first trial, he watched it flutter into the depths of Big Spring Creek where it was “eaten by a massive brown trout that I just couldn’t do anything with.” Although he didn’t land that fish, he knew he was onto something.

Twenty years later, the Home Invader is a standard go-to streamer on trout waters around the West, and the fly is distributed as a designer signature pattern through Umpqua Feather Merchants. Aaron Stiny, regional business manager for Umpqua, reports that it is in the top five in sales, not only in the Northern Rockies but nationally as well.

The story of the Home Invader starts with a kid growing up in Southeast Pennsylvania, mentored by his father and grandfather in fishing for both bass and trout. “My dad was into fly fishing a little bit,” McKnight says, “and he introduced me to it at a young age. I bugged him constantly to take me fishing.” Without formal instruction, McKnight admits his early fly fishing was a struggle. He started out with an outfit he bought at a flea market for $5. But his skills steadily improved until he gave up spin fishing in his mid-teens, “when I got wheels and could drive to better fishing.”

McKnight’s tying career started with his father (who had taken Joe Humphrey’s famous fly-fishing course at Penn State). But even as a fledgling tyer, McKnight recognized he had tapped into his creative side. He recalls finding bugs in his backyard, and then bypassing standard patterns, trying to recreate what he observed with the tying materials he had at hand. His tying and fishing skills developed to the point that he found himself tying flies commercially and guiding anglers by the time he was 18.

The creativity he discovered at the vise directed his educational plans, and he majored in art at a college in Pennsylvania. “But I got serious about fly fishing, so much so that I quit college at 23.” In 1997, he came West to work at Lake Lodge in Yellowstone National Park as a porter. “I was really a janitor,” he laughs. “But I would sneak out every night to fish the ‘magic hour,’ and learned just how good the fishing out West really was.”

During that summer in the park he met his future wife, Shayla, who was going to school in Texas. After several years of bouncing back and forth from Texas to the Rockies, they settled in Livingston in 2007. McKnight went to work at the Yellowstone Angler in 2008, where he ran the guide-booking desk and guided on his days off. He left the shop in 2012 to guide full-time, and now works as a program manager at Yellow Dog Flyfishing Adventures, where he handles their Bahamas and Honduras programs. He still guides in Montana as his schedule allows, with a particular bent for hunting big trout on the Yellowstone and local still waters.

Although fishing and guiding took him away from a formal education in art, the connection between his tying and fine-art skills is expressed in a variety of media, including oil paintings, pastels, and drawings. His subjects are the things he knows best: fish, insects, and flies. His most unusual artworks are shadow boxes of mixed media featuring elaborate traditional Atlantic salmon flies set in an arrangement of natural tying materials.

McKnight’s reputation as a fly tyer has grown beyond local and regional status. He has been a signature fly tyer for Umpqua Feather Merchants since 2003. Although the Home Invader and some of McKnight’s other patterns were designed for trout, his experience at destinations around the Caribbean has given him the opportunity to create a number of effective patterns for saltwater flats angling as well. •

“Who tied these flies?” I asked flippantly, pointing at the neat row of exquisite patterns atop the coffee table.

“I did,” said my Swedish husband of two years.

Stunned, I examined the clean lines of hackle and dubbing that shaped a most delicate fly. Chagrined that I had missed this other talent that my fly-fishing, river-keeper, author, instructor, guide, rod-building husband held, I quickly added fly tyer to the list.

Lars-Åke Olsson was born in 1942 in the village of Långsele, in Northern Sweden. An active outdoor child, he skied, hunted, fished for perch and pike, played endless games of soccer, and, somewhere near his 15th birthday, came upon a local river and cast his first fly to eager grayling. Always curious, Olsson returned streamside again and again to study and engage its exciting, mysterious inhabitants. In 1981, after careers as a national league soccer player then school teacher, he settled in the village of Gimdalen where he was able to more fully exercise his passion for fly fishing on Idsjöströmmen (a section of the 60-mile Gim River). In 1989 he became the river’s first manager, commonly referred as a river keeper. His was the first designated catch-and-release river in Scandinavia and Europe.

Years of logging had disturbed Idsjöströmmen (and other rivers in Sweden) as her riverbeds had been rearranged to accommodate the annual, spring-runoff transport of felled trees to Baltic sawmills. Those days ended in the 1970s as trucking replaced floating the forest’s harvest to various mills in the east. Cue the new, vigilant river keeper with the knowledge that Idsjöströmmen could be improved, along with the lives of the grayling and brown trout that lived there. Three major restoration projects later, habitat was restored to pre-logging health, and the insect hatches and size of fish both began to grow. In 1993, Olsson received the Federation of Fly Fishers Conservation Award for his efforts.

Devotion to his river inspired Olsson to study more closely the aquatic insect life, which led to the creation of his signature Gim River series of flies. He began tying in 1961 after reading about Frank Sawyer’s Pheasant Tail Nymph and Killer Bug, and in 1968 when Olsson was traveling with his soccer team in England, he stopped by the Netheravon to spend a few days learning nymph fishing from the master himself. “In addition, I read books and bought a vise and fly tying materials from a Swedish company called Fly-Dressing. I taught myself a lot about fly tying from reading,” says Olsson.

His Gim River series began with the Squirrel Caddis. “Because caddis dominate the aquatic insect life on Idsjöströmmen. I wanted to make a fly that was easy to tie, and use materials from the forest where I lived. It was very common to find dead squirrels on the roads, and I found I could make the body and the wing from the same animal as well as in two colors: gray from the winter coat, and mahogany from the summer coat.”

Yet, of the 12 flies representing the various stages of caddis, mayflies, stoneflies, and midges, the Gim River Dun is the most elegant. “I borrowed the idea for the Gim River Dun from several sources. The wing is from the famous Catskill flies, the lemon-speckled wood duck was substituted by the gray-speckled feather from a Swedish male mallard. I tied the wing between the middle of the hook and the hook eye, not directly behind the hook eye, which is more traditional,” he says. “Then I borrowed Vincent Marinaro’s idea of splitting the tail at a 45 degree angle to the sides instead of the conventional position of straight off the hook shank. I tied a sparse hackle; one turn behind and one in front of the wing. Since no dry fly is ‘high floating’ as the hackle fibers actually drill through the water’s surface, I cut an upside down ‘V’ under the hook so the fly is resting more naturally on the water offering the fly more support. All these adjustments make the fly more stable, like an outrigger, the center of balance is more correct.”

The Gim River patterns Olsson created have proven successful on the spring creeks of Montana’s Paradise Valley, and the Henry’s Fork, and on the Missouri, Madison, LeTort, Little Lehigh, and Catskill rivers, including the famed Junction Pool. In England, he has cast them on the Test, the Itchen, the Wye, and the Avon, as well as over the waters of Slovania, Norway, Finland, and Denmark. Apparently, the trout and grayling of the world all speak Swedish, as they have succumbed to Olsson’s charmed patterns. It goes without saying, I seem to understand the attraction. 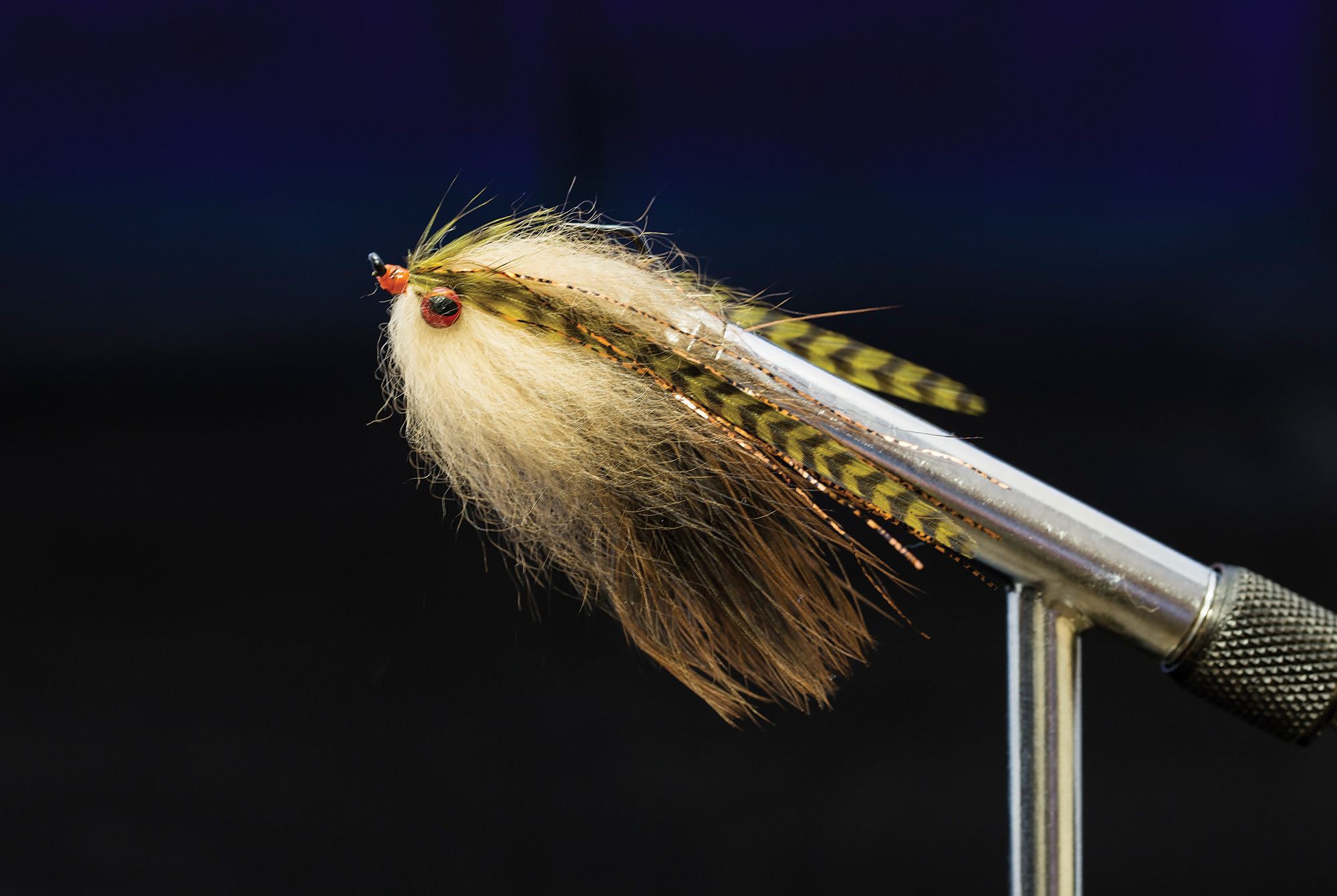 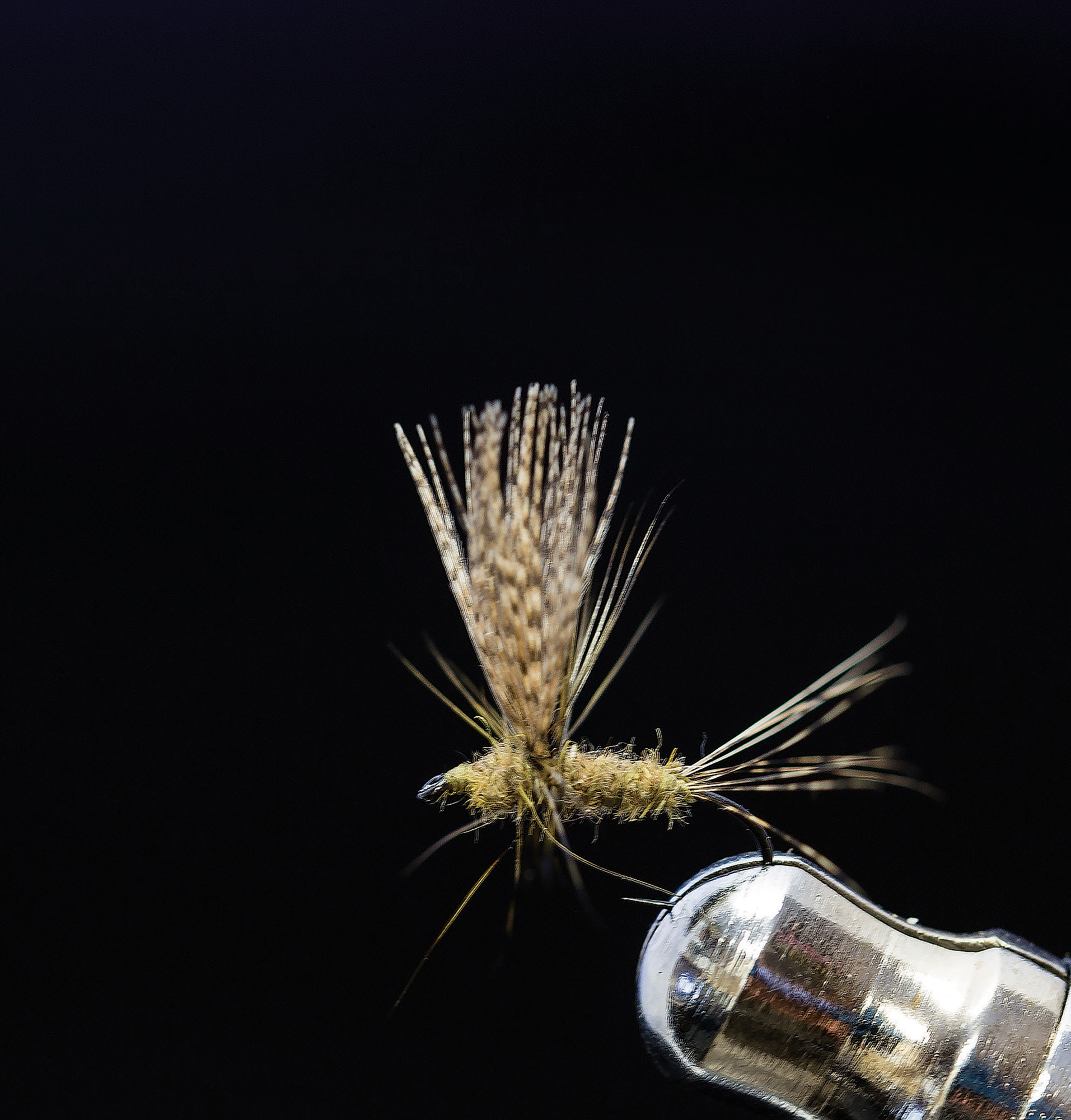 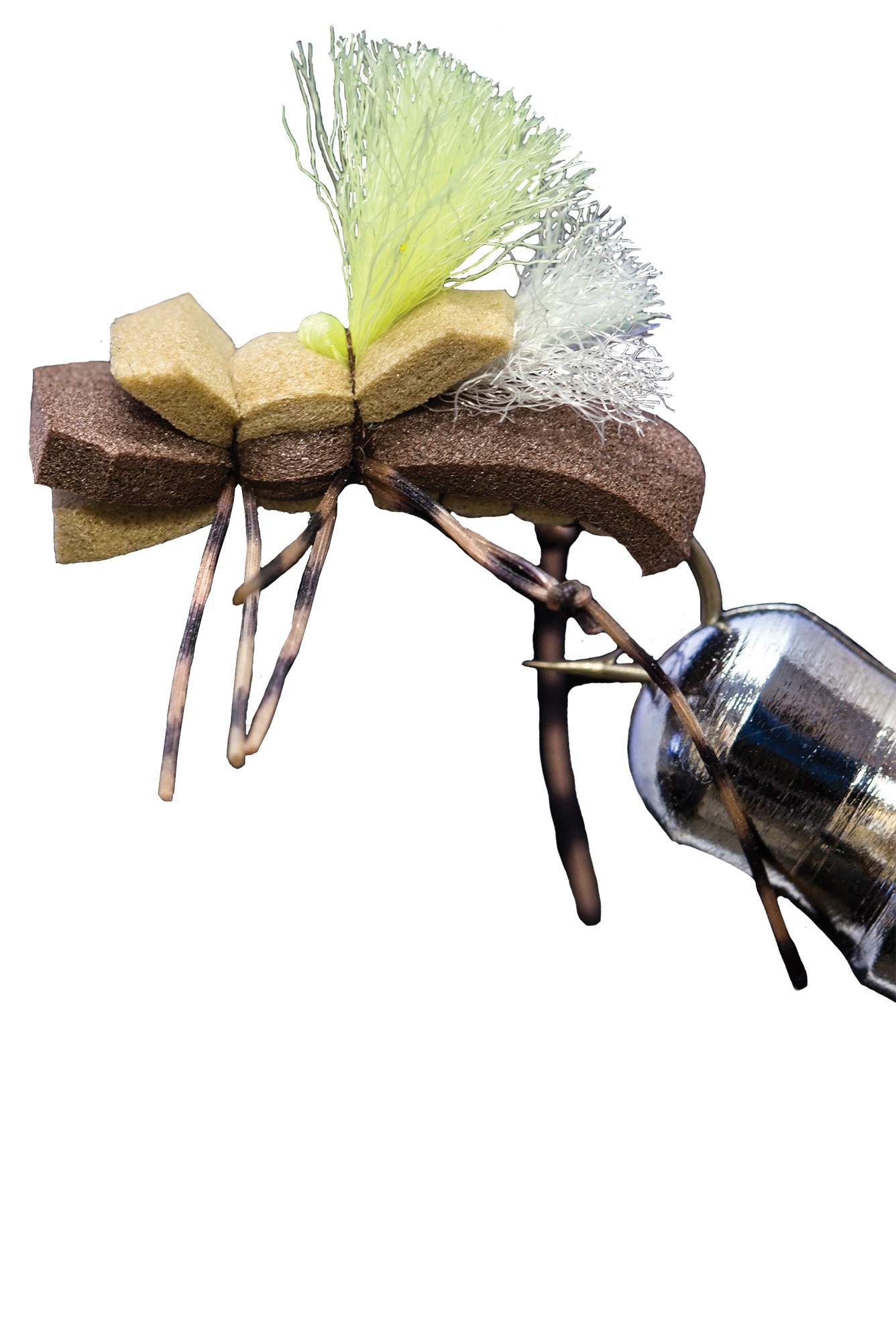 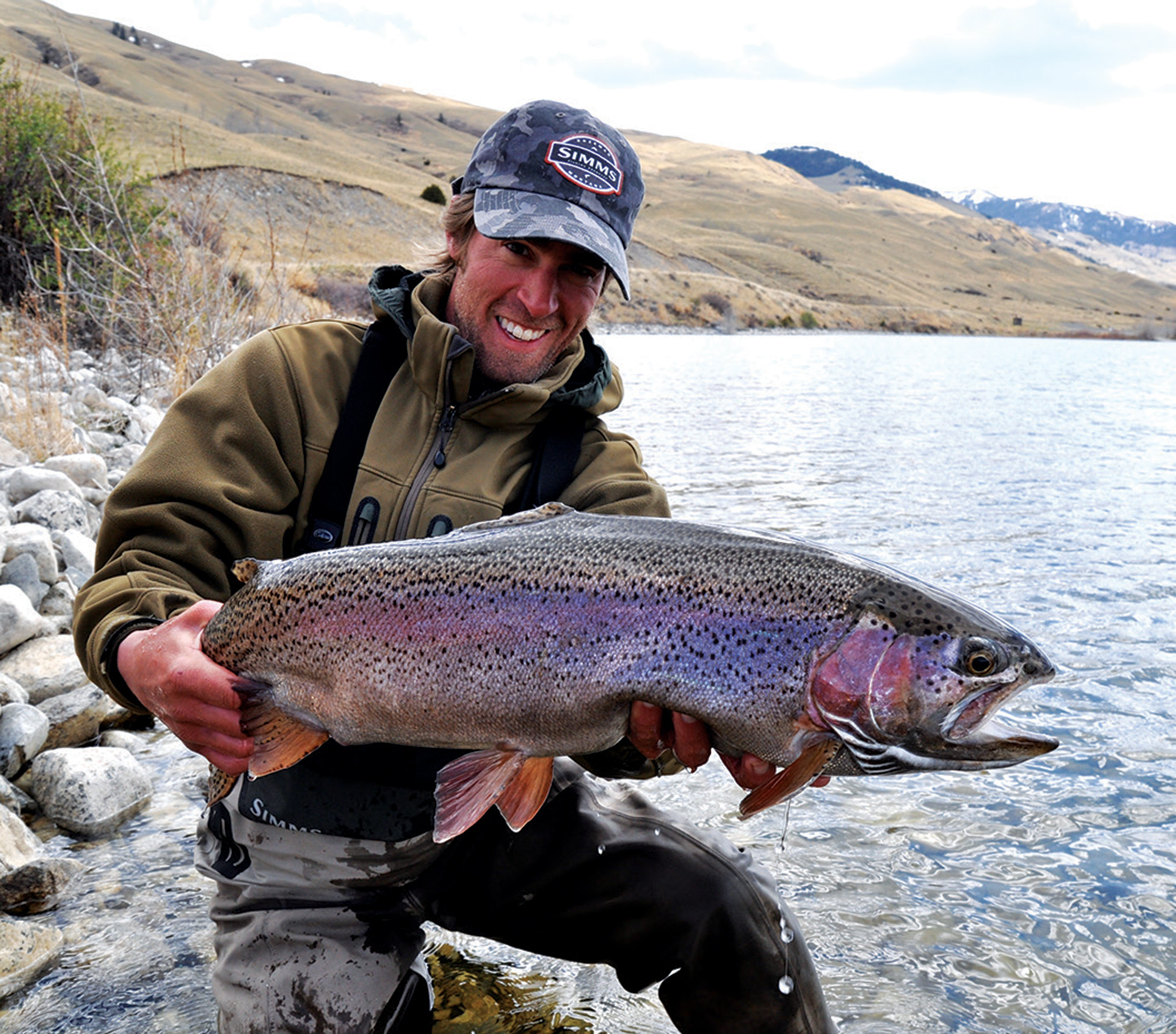