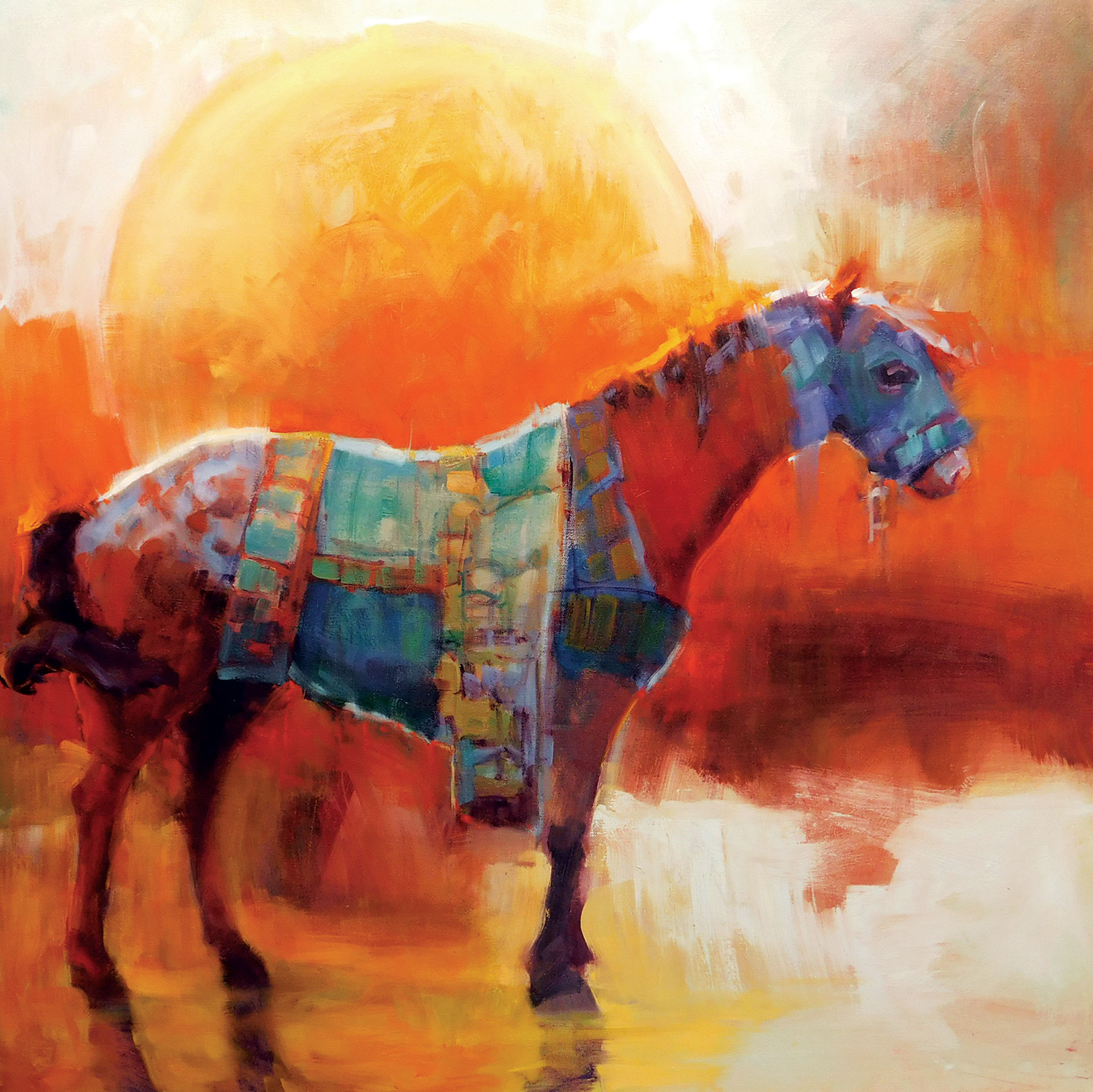 With a minimum of brushstrokes, Montana artist Shirle Wempner twirls the light. Her paintings jump with color, intuitively hitting the right notes, at the right tempo. Her compositions, not crowded, not bare, stir the viewer to feel the movement.

“I’ve always been drawn to the Impressionists,” Wempner says. “And I try to capture the look of a subject with the least amount of brushwork, so up close it looks like a bunch of brushstrokes but from further away it comes together.”

Keeping her painting as loose as possible, she hones in on specific details. “That way I can get the feel for the rest of the figure or animal and evoke some kind of emotional reaction to a piece,” she says. “Sometimes, depending on my mood, there are times when I go into my studio and I just want to paint wildlife. But horses are always in my mind.” 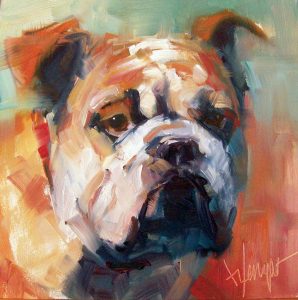 Growing up on a horse ranch gave Wempner a deep connection to animals — large and small, wild and domestic — and that comes across in her art. Wempner manages to snag her work on characteristics that are unique to the subject, whether it’s the perk of an ear or the puffed chest of a chick.

Although landscapes are not what she’s known for, the “accidental” landscapes that frame her subjects stand out as particularly free and easy. There is a lack of restraint that enlivens the work.

To get ready for larger, more intense pieces, Wempner does small studies of birds. These diminutive paintings feel spontaneous — with a few brushstrokes or wipes of her palette knife she is able to capture the swiftness of flight. “Doing these smaller pieces has a way of loosening me up,” she says. “They’re so full of color, it’s a great way to get ready to tackle a more complex painting.”

Her painting, War Horse, was recently accepted into The Russell Exhibition and Sale to benefit the C.M. Russell Museum in Great Falls, Montana. Wempner’s colors permeate the painting. Her watery groundwork brings about a kind of reminiscence, but the heavy blues of the blanket make the viewer rethink the piece. In the background, a large sphere, like the setting sun, turns the piece again, for even though it seems to be marking time, it does the opposite and the painting’s timelessness settles the arrangement in a new light.

Artist Julie Tippetts has watched Wempner’s work evolve over the years, and owns a few of her paintings. “I think she’s one of the few artists right now who is painting how and what she wants,” Tippetts says. “It feels like people are always following someone else’s way … but she is following her own intuition.” 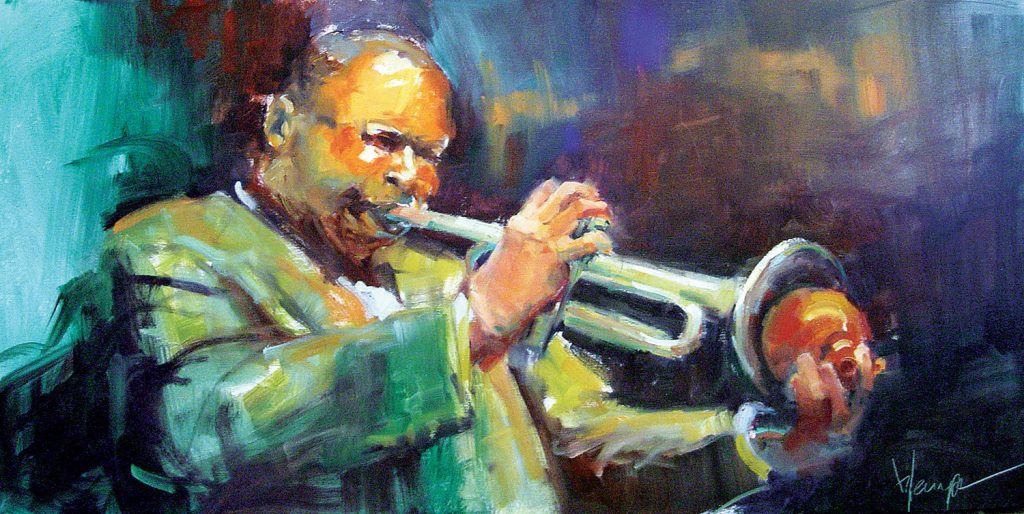 According to Tippetts, Wempner “walks the walk” in her support of fellow artists. “She finds the young artists that need the support, and buys their work. She doesn’t do it as a gesture, she likes it, buys it, and hangs it. It’s very telling of her art spirit.”

Wempner takes reference photos when she’s outside but she doesn’t use them very often. “Once in a while I’ll have a specific idea, but more often I’ll look around for something to strike me, and I’ll formulate a painting that way, through format and color scheme,” she says.

Her first decision is the size of the canvas. Once she arrives at the format, she can begin to think about the composition. “I like to work with square formats, and that for me presents a certain kind of composition,” Wempner says. “But it’s an intuitive process, if I have to force it, I don’t enjoy it as well.”

Tippetts admires Wempner’s fearlessness. “As she is developing her own art life story, she’s not afraid to tackle any subject, whether it is something she is intimately familiar with or not,” Tippetts says. “She’s able to find something that excites her enough to pull out the paints in any setting.” 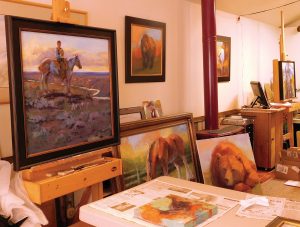 Shirle Wempner’s painting “In Gratitude” sits on an easel in her studio just north of Big Timber, Montana.

In her studio, Wempner usually has several paintings going at a time. “When I can, I’ll start a painting and complete it,” Wempner says. “But sometimes I’ll need to let it dry and continue with it. But smaller paintings I’ll do a la prima, work on it from start to finish, painting wet on wet, until it gets to where it needs to go.”

The moment she loses the emotion of a piece she’ll step away from it. “I really like allowing for spontaneity. If something’s not working, I’ll throw a color out and see how it feels,” she says. “Many times it takes me on a whole different path, which I find really exciting. The excitement of the unknown, and the question of where will this take me? That’s exciting.”

Wempner is a member of the Montana Painters Alliance, and feels privileged to have been admitted into the organization.

“I started painting full time in 2011,” she says. “I had been painting prior to that, but I’d been a full-time paralegal for 30 years. I feel very fortunate because I got into the Montana Painters Alliance as well as the Women Artists of the West group.” 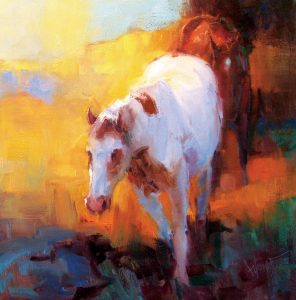 Wempner’s work encompasses everything from portraiture to landscape, from chickens to horses, from figures to still-life paintings. “Sometimes people say you should focus on one subject, establish a name in a particular subject, and I agree with that to a certain degree, but I find so many things fascinating,” she says. “I have to be interested in what I paint. One of the things I enjoy is taking a simple, ordinary subject and making it exciting; a lemon for instance, and really working on that shape and color. When you paint it, it has a whole different and new kind of beauty.”

Colin Matthews, owner of Creighton Block Gallery in Big Sky, Montana, has represented her work for years. He appreciates the strong drawing skills that are evident beneath her broad brushstroke technique. “Her horses, her bears, and her buffalo, for example: All are charming and interesting, and the boldness of color is there, but aside from that, they’re always well-rendered,” Matthews says. “The painting is done over the top of a very strong drawing. The other thing that is remarkable about her paintings is the ability to evoke a landscape with very few brushstrokes. The background is not completely abstract. It resolves into an impressionistic landscape almost magically. She’s very confident with her brush. There’s not a lot of feathering or attempt at illusion. It’s very painterly.” 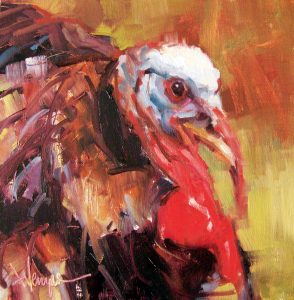 He knows the kind of leap of faith it takes to quit a paying job and dive into the process of becoming a full-time artist. “When she made that transition to a full-time painter, the courage it took was phenomenal,” Matthews says. “The paintings she produced when she made the switch were full of confidence and joy, with the sense [that] she was doing what she wanted to be doing. She was embracing her destiny as a painter. It’s evident in the looseness of her work.”