Catherine Courtenaye’s paintings reveal the world through their smooth, sensual surfaces and the unexpected depth of her compositions. With years spent contemplating the unsaid voices of 19th century handwriting and the whispered histories of folk art, Courtenaye speaks to place, to nature, and to how we situate ourselves within both.

In her most recent work, a series called From the Eye of the Bird, she explores the transmission of communication through bird migrations, magnetic fields, and wind. Building on the tension of gesture and color, her work is both intimate and thought-provoking, as Courtenaye positions the viewer between layered meanings and the physicality of her marks. 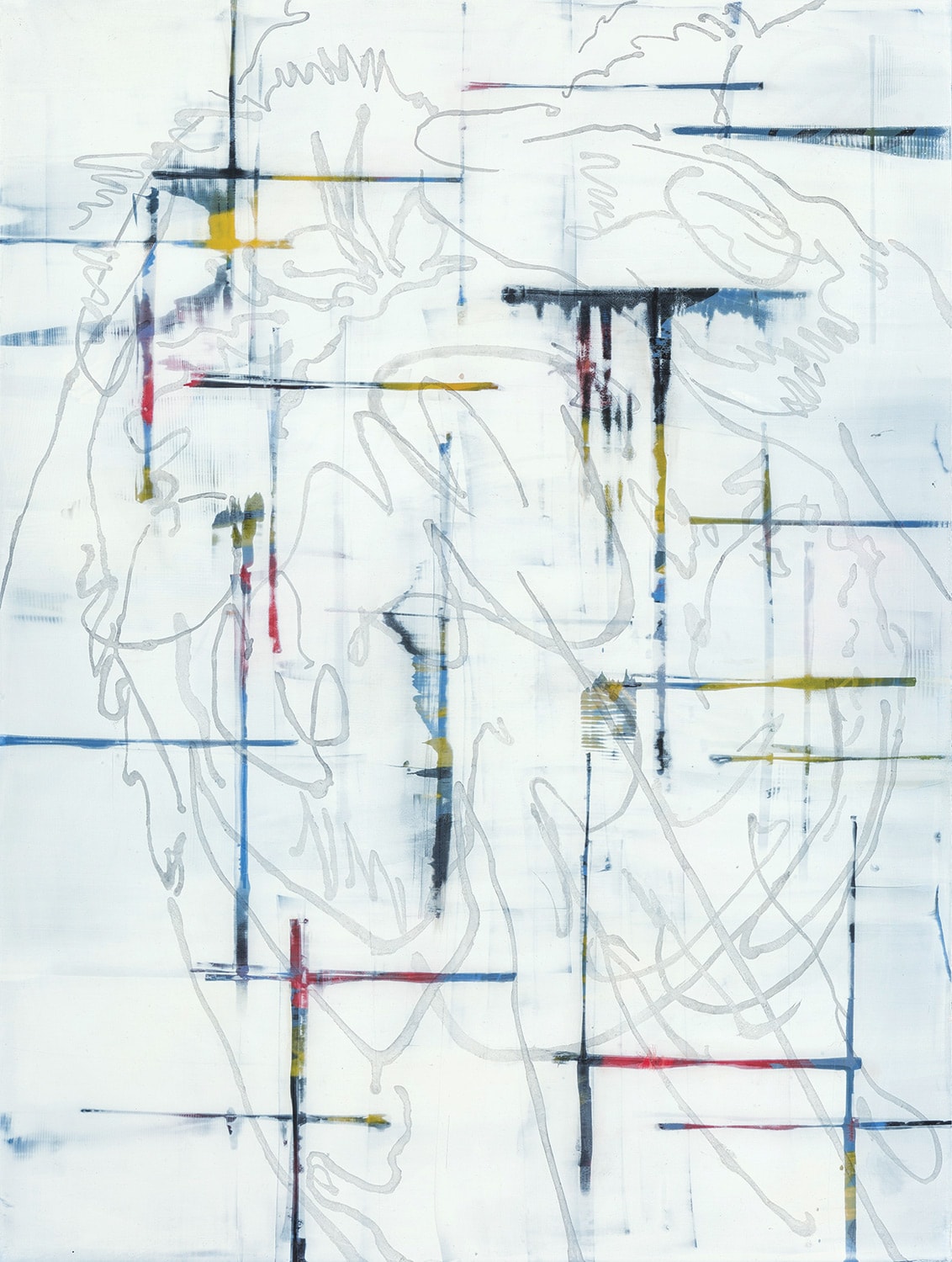 “I want my work to be experienced as coming from a combination of rigorous thinking and an involvement with the materials of paint, which convey my passionate attraction to color and surface,” she says. “In this most recent group of paintings, there’s a back-and-forth between quickly piling on a lot of paint and then tamping it down.”

By letting go, then rearranging the paint, Courtenaye first creates chaos and then places order on it. In this way, she works to convey both science and beauty. “My process takes advantage of separate layers of the painting, letting the layers dry in between,” she says. “One layer will be lush and passionate, and the next will be reductive. Then I pull away parts to reveal the seething quality of the natural surface of the earth, with so many things alive and blooming.”

Courtenaye was one of four artists to win the Montana Arts Council 2017 Artist’s Innovation Award, given to those who exemplify originality, commitment, and ingenuity. “What I saw in Catherine’s work was a sustained investigation,” says artist Tracy Linder, who serves on the council and chaired the awards committee. “She’s always finding nuances, really looking at the phenology of handwriting and its historical transformation. And now she’s looking at how nature makes lines and how we can see that communication. Her work has a sense of completeness that allows her voice to come through.”

By taking a close look at handwriting, which can be lost in the day of the keyboard, Courtenaye continuously finds ways to see the world through gesture and brushstrokes. When Courtenaye started her series, she wasn’t thinking about mapping, although it can be read as a map. “There is a reductive quality to the work, but this work is rooted in the process and thoughts that have been honed over many years,” Courtenaye says. “Like my previous work, it’s inspired by the passage of time. Time is shown in my use of layers and the line quality of 19th century penmanship. I’m also folding in my long-held concerns about landscape and the movement of birds. It started out very specific, but became more abstract.”

At her starting point, she makes pen and ink drawings of birds encountered in Montana and the West, with quick, cursive line drawings that invoke flight as well as feelings of coming home; a return to things known mixed with the adventure of things yet to come.

In Circumnavigate, she calls on the sounds of wind and maybe rain; the scrawl is more gestural, although the vernacular of hand-drawn humanness is clear. The vertical and horizontal exposed lines seem to drip with content, pulling the viewer into a place of both observing and being observed. “I do these drawings with a steel-nibbed pen and India ink,” Courtenaye says. “I make very fast drawings that have a calligraphic quality to them, in connection with my interest in penmanship. I wanted to incorporate the line quality of the drawings, so I enlarged them and superimposed the lines onto these large, aerial landscape paintings.” By working in this way, she can suggest a framework of natural instinct, like bird migration, over a landscape of man-made elements, such as roads, grids, or agricultural fields. 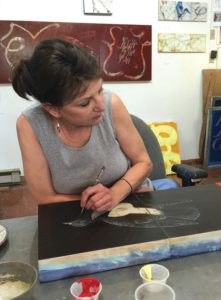 Artist Catherine Courtenaye is inspired by both the natural world and handwriting from the 19th century. Photo by Ann Weber

In another series, Specimens, Courtenaye examines the evolution of our written alphabet from hieroglyphics to more abstract letter forms. For example, the letter M comes from an ancient Hebrew word for water, and it could be considered an abstract wave. “When I discovered the origin of our alphabet, it coincided with my desire to incorporate something from the natural world into my work, which previously was just focused on penmanship and color. I began working with the word puzzle format of the rebus,” Courtenaye says. “I wanted to create some sort of equivalence in the viewer’s mind with the natural world, such as birds, text, and pure gestural marks.”

Working within this framework allowed her to construct a dialogue between the human impact on the environment and the birds she’s observed firsthand. “I do go bird hunting with my partner in the mountains of Montana,” she says. “Bird hunting is a way to connect myself with the land. I wanted to bring that into my studio practice along with my thoughts about art making.”

In Ruffed Grouse, she envisions a grouse walking through a field of letter forms. The letters spell out “ruffed grouse.” These are not wildlife paintings, but they communicate the aesthetics of a wildlife painting with an abstract discourse, using the elements of human culture by incorporating letter forms.

“When I was beginning this series, I had been looking at 17th century studies of birds, created in the spirit of exploration and documentation of flora and fauna,” Courtenaye says. “That’s why the series is called Specimens.”

Bob Durden, senior curator at the Yellowstone Art Museum in Billings, sees Courtenaye’s work as visual poetry. “We did an exhibition in 2015 titled Echo: Unspoken Dialects. The formation of that was dealing with some form of language, invented or real,” Durden says. “Catherine was one of a handful of people in the state that operates that way. Her view of the world and her take on the written language is about how, even if we don’t recognize the words, it tells us something and records a journey in time.”

Courtenaye suggests through her brushstrokes, color, and layering that things can appear before us. Guidelines are given, even if we don’t know how to interpret them at the moment. “As an artist, she is giving us a lens and some direction to view the world through abstraction, which is very complex and subtle,” Durden says. “It’s open-ended, so the viewer may not know exactly what her intention is, but she draws you in. She gives you the visual narrative, a point to begin to understand the message, the sweeping line and movement, and finally the words that operate as maps and a journey.”

“It’s been pretty well sought out by emerging artists,” Durden says. “We try to convey the breadth of artistic practice across the state and value the work of all living artists with emphasis on quality, not on the form itself.”