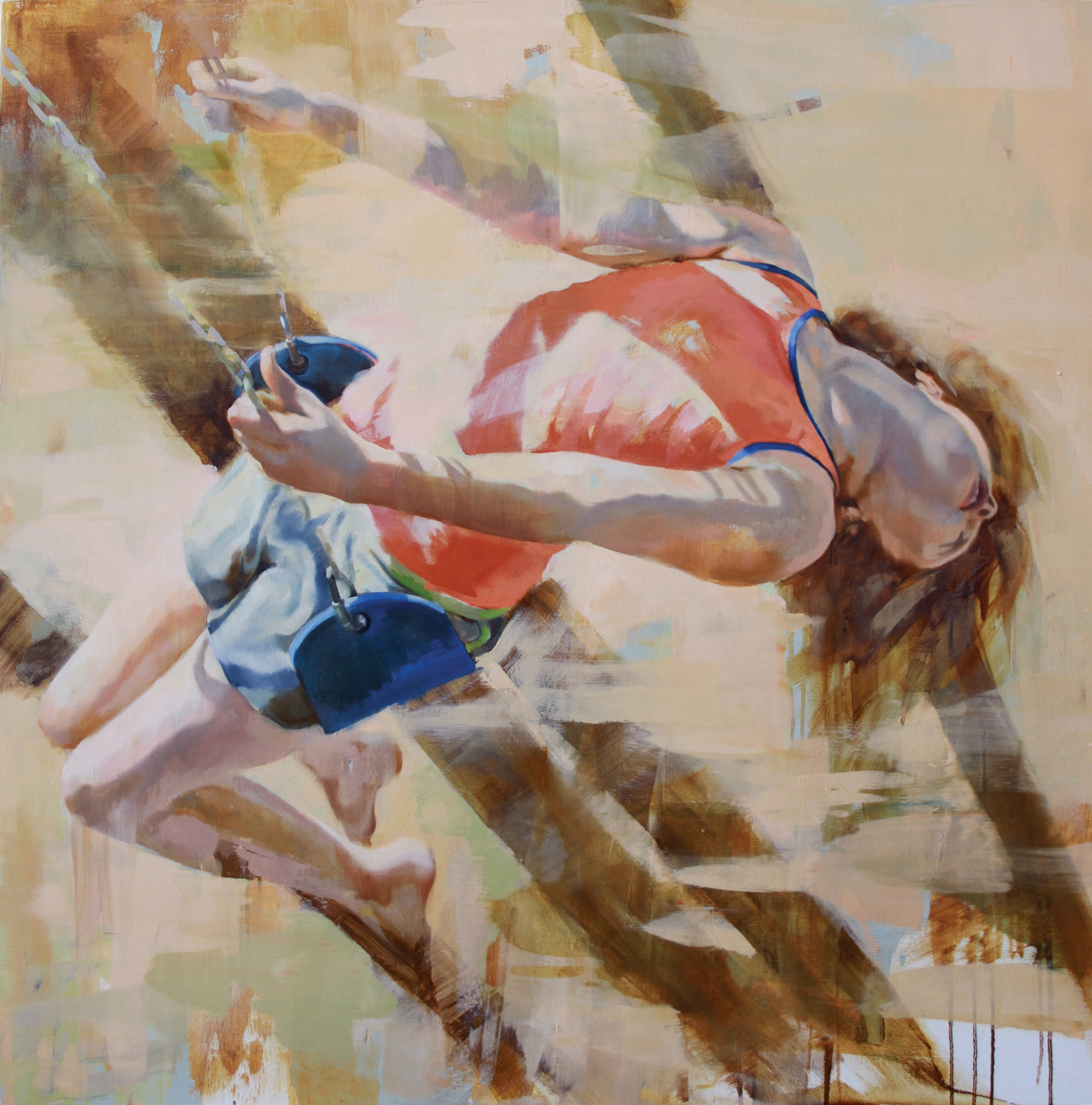 02 Oct Artist of the West: The Ties That Bind

Within Diana Tremaine’s paintings resides a struggle between the perfectly rendered image and the raw, undone threads that tie her to the work. There’s a tension between elements finished and those left undone that speaks to the human dilemma.

Her layers of paint float in and out from the surface. In places, the naked canvas is bared to reveal its beginning, left like ticks on a clock, to echo, to erase, to imagine.

In a 4-foot-square piece called Long Summer Shadow, Tremaine portrays an image of a young girl in midswing, her eyes closed, leaning back, stretching her legs and lost in her own world of flight. The sun refracts across her body, the lines of the swing’s chains against the shadows of the poles. The girl’s head is thrown back, uninhibited, her hair suspended in momentum as a layer of deep brown underpaint drips down the image. Tangled up in the conflict of image and abstraction, of light and yearning, of equal parts joy and loss, the image signifies a theme in Tremaine’s work.

Planes of light in her Belgrade, Montana, studio beam through the slanted openings of the roof — revealing a slice of sky, emboldened clouds — and from the wall, tall rectangular windows frame peeks of untamed grass. Paintings in various stages of finish seem in open conversation with each other. Tremaine’s easel is set diagonally from her workbench, where brushes stand at attention. Small smears like shorthand edge her paper palette. Nearby she sets two ceramic cups on a cloth. Her momentary still life pits representational versus breakdown and defacement.

She starts, as she always does, with a layer of thin, transparent raw sienna that covers most of the canvas.

“Sometimes I cover the entire canvas and sometimes I leave a bit of white canvas,” she says, touching her brush to a color. “That white may stay that way throughout the process, although it’s not preconceived.”

After the transparent brown, she applies an opaque gray.

“I want some marks to pop off and float,” she says. “But the whole process is about responding to the layer before. The day I put the gray over the raw sienna, it’s all about my mood and bears no relationship to what will go over the top.”

Next to her brushes is an array of squeegees, knives and small rubber pulls, for dragging paint across a surface.

“She was teaching next to my studio and we began to look at each other’s work,” Burrows says. “I am astonished at her growth. I think she’s gotten to the point where I find her work really thrilling, and I’m a tough critic.”

“She has the ability to create light in every one of her paintings,” she says. “I’ve seen her work develop from the more realistic into the way it is now … more of an abstract feeling that includes representational images. I know abstraction pretty well and she does a remarkable job of combining the two in order to make her point.”

Aside from Tremaine’s mastery of drawing, her awareness of each mark and each brushstroke, Burrows appreciates Tremaine’s use of space within the composition.

“I also think her subjects are complex and her colors are developed,” Burrows says. “If you look at the composition as a whole, you can see the originality in the way she poses her figures. She’s a hard worker. It’s always been her passion and she’s a dedicated and committed artist.”

The sharp tang of turpentine sweeps through the studio as Tremaine adjusts the small square board on her easel. The underlayers are already applied. She loads a small brush with a transparent brown. This is the sketching phase. The roundness of the cups finds its purpose on the surface. In dark curves, wide and relevant, she ushers color into the work, a rough guide to find the form.

She uses a circular motion on the board with a towel dipped in turpentine, leaving the emptiness of the cup in a swirl and whisper of paint. A simple action, but one that implies essentialness: how each of us desires to be filled. And all the while drips of paint surrender to gravity, leaving suggestions of color behind.

Tremaine finds a light green on her palette for the other cup and slowly arcs the brush along her sketched line.

“I like the interplay of opaque and transparent so I constantly go back and forth,” she says, dabbing her brush into the paint again. “I also feel my way around in the painting, trying to decide what to leave and what to develop, what’s important.”

Her background in drawing pushes her to precision painting, to render something as perfectly as possible. But her painterly self struggles to stay loose, to grasp the abstract and allow it to come to the fore. So she also asks herself if the painting is working emotionally, not just compositionally.

“It’s always a dialogue within me whether to render something beautifully or to cut loose,” she says, picking up the squeegee. “It’s my personal battle to get out of myself.”

It’s with the squeegee that she’s found a way to let go. While the paint is still wet, she swipes the rubber edge across the green cup. Like a windshield at the first rain, the image slides just a bit. It’s still a cup, but it’s more than that. It’s the memory of a cup.

And that’s when she stops for the day.

“I always stop, whether I’ve been painting for two hours or five hours, when I make a mark that gives me a shot of adrenaline,” she says. “At that point I must put down my brushes because it makes me want to come back to the studio the next day.”

This summer Tremaine’s solo show, The Ties That Bind, will be up at the Gallatin River Gallery, in Big Sky, Montana. It will include all manner of ties: emotional, psychological and physical.

After years of concentrating on figurative and wildlife art, Tremaine has added to her vocabulary and this showis the culmination of that work.

“It’s going to be pretty diverse,” Gustafson says. “She loves the theme, ties that bind, and she’s exploring it on a lot of metaphorical levels: owls, trumpeter swans, her daughter, her horses. … She’s pushing her imagery and she’s really moved forward in the way she approaches a painting. She lets it flow as her process is revealed. Each painting is so powerful.” 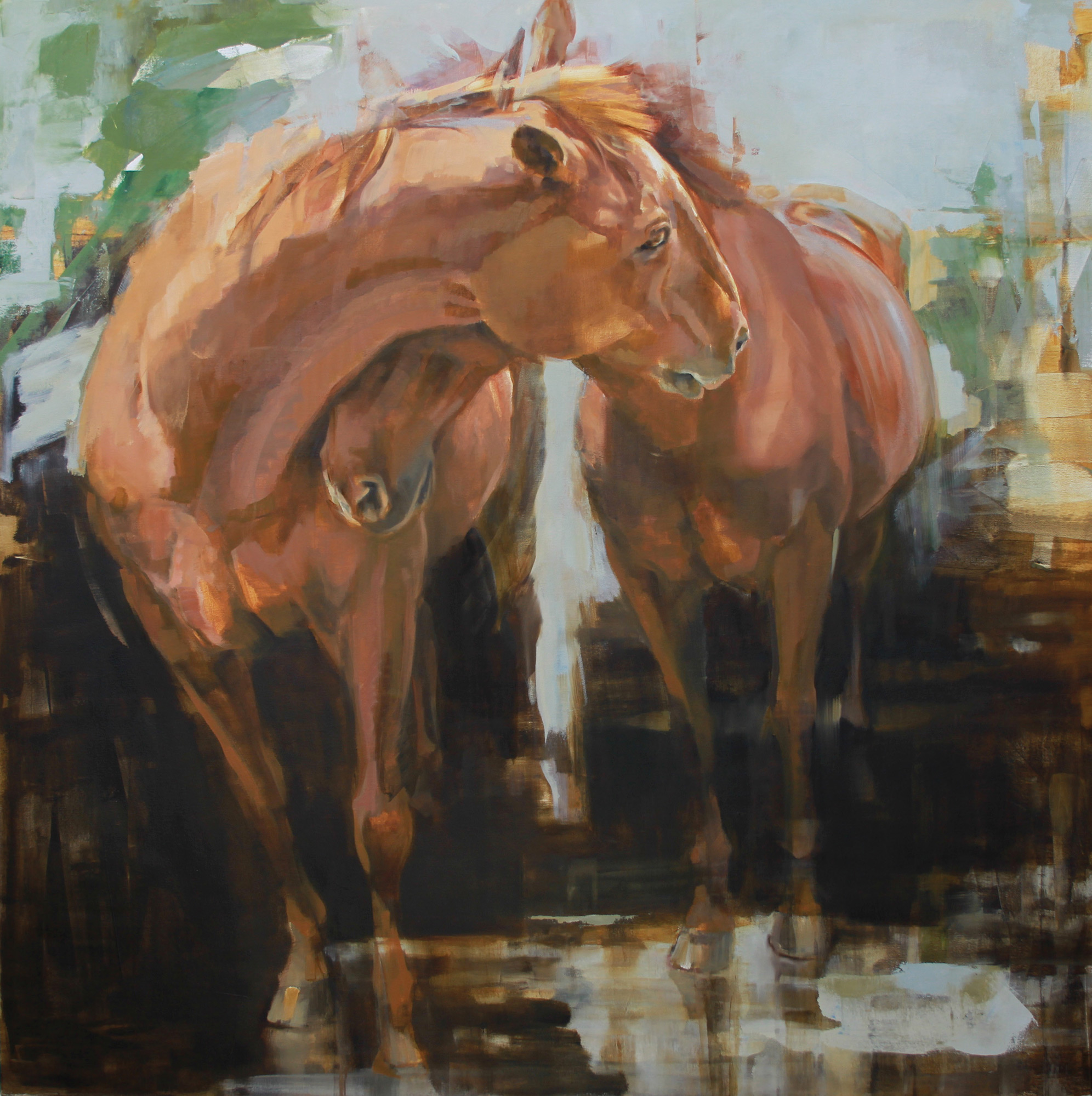 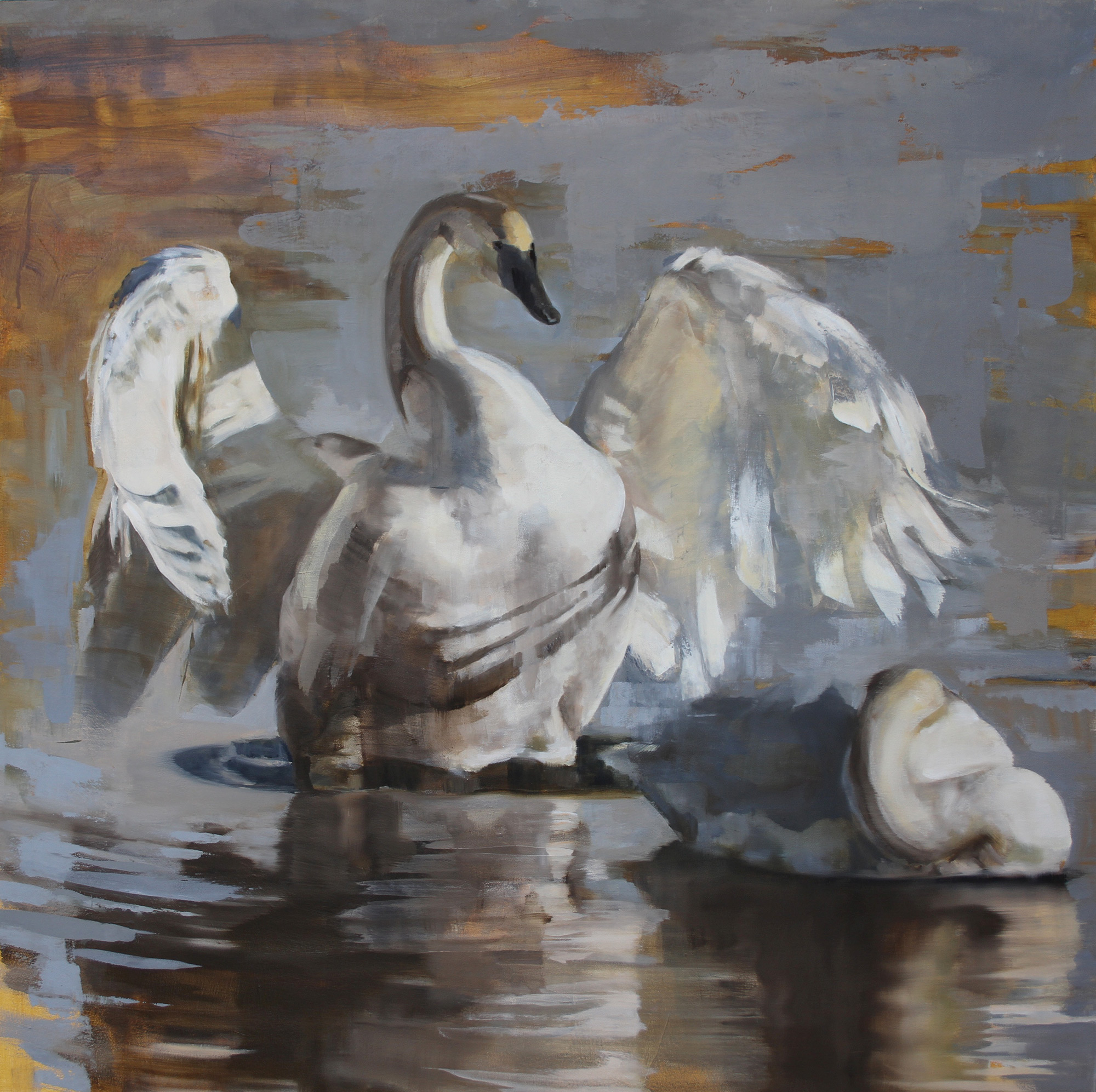 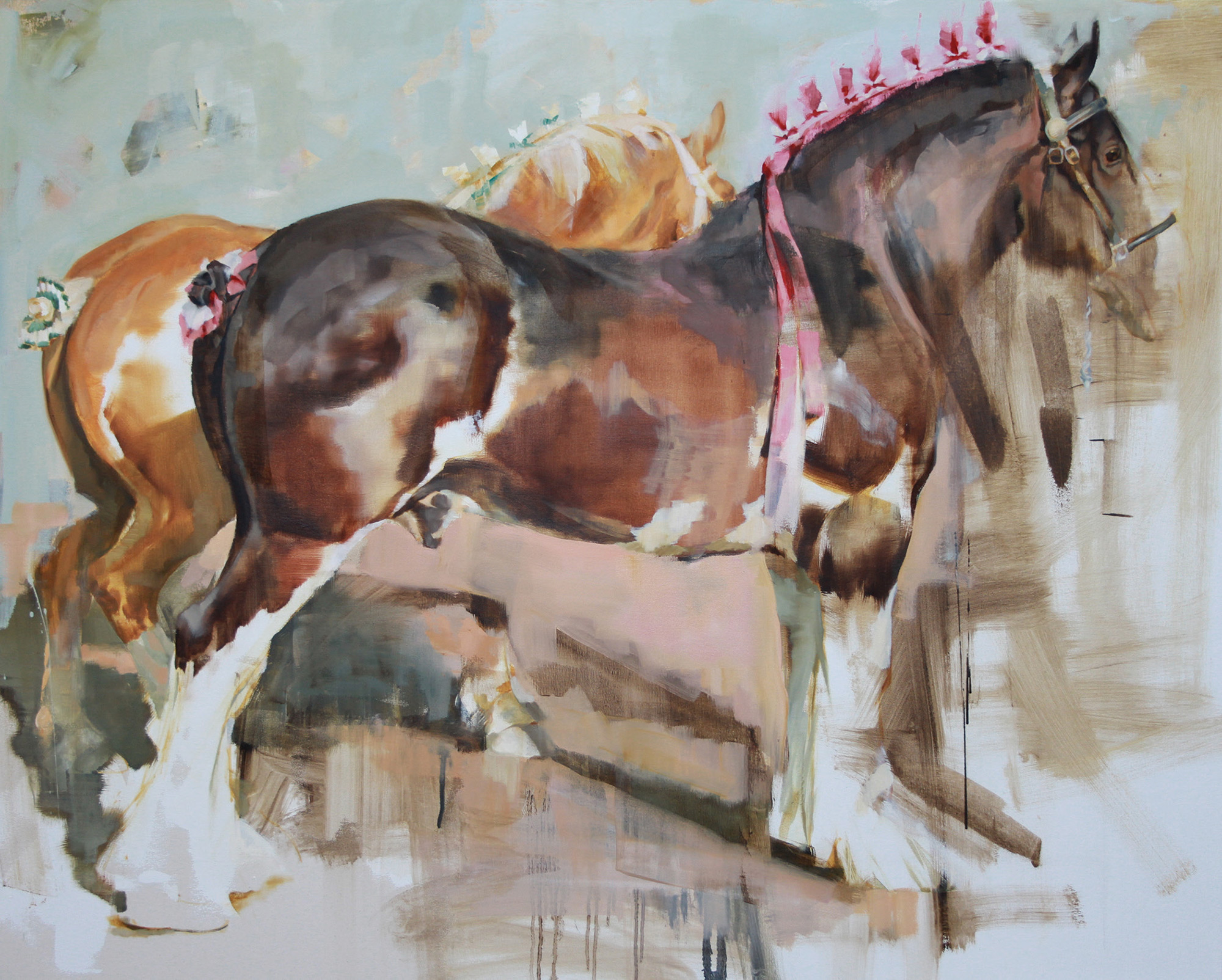 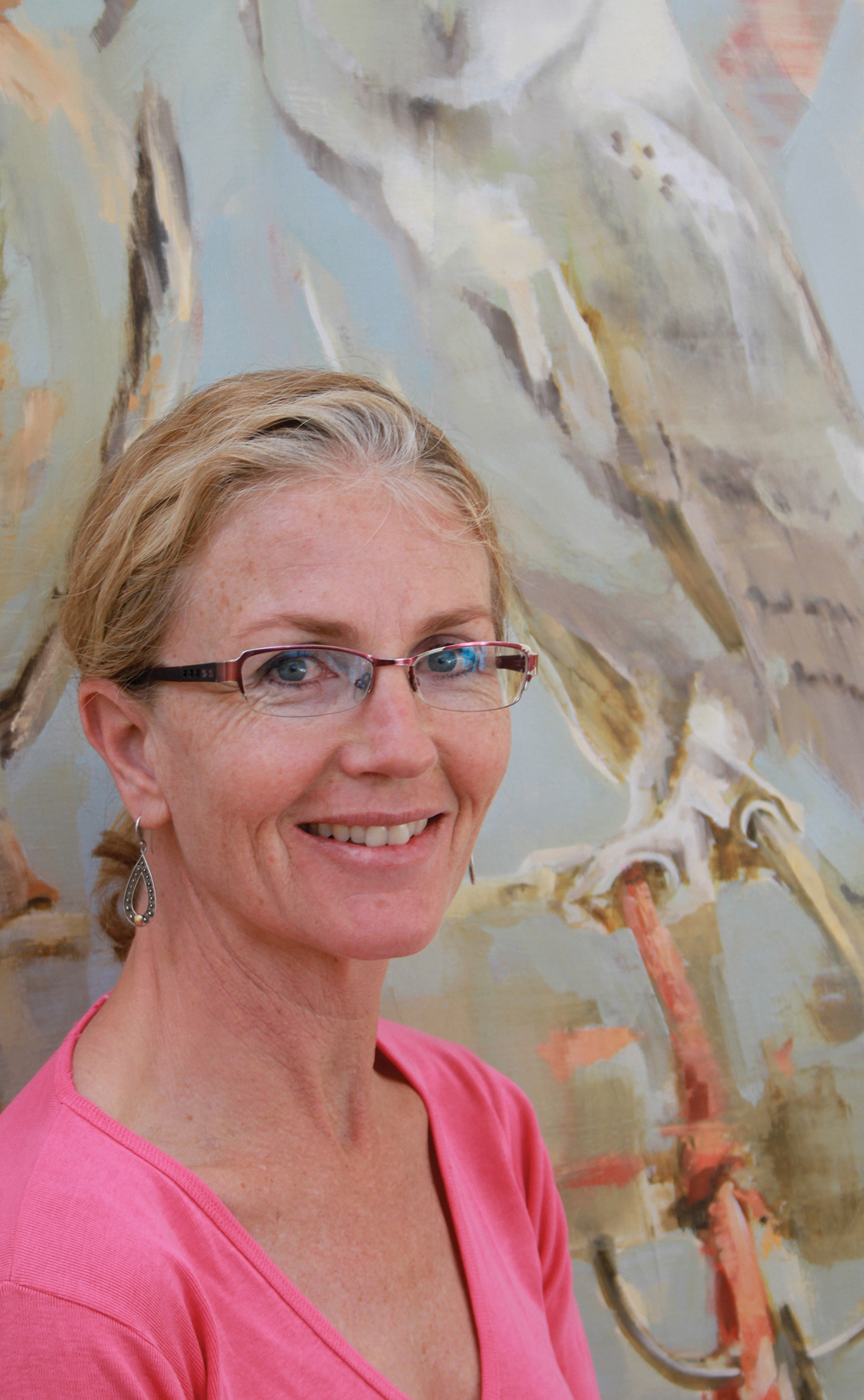 Diana Tremaine at her studio. Photo by Graham Neale 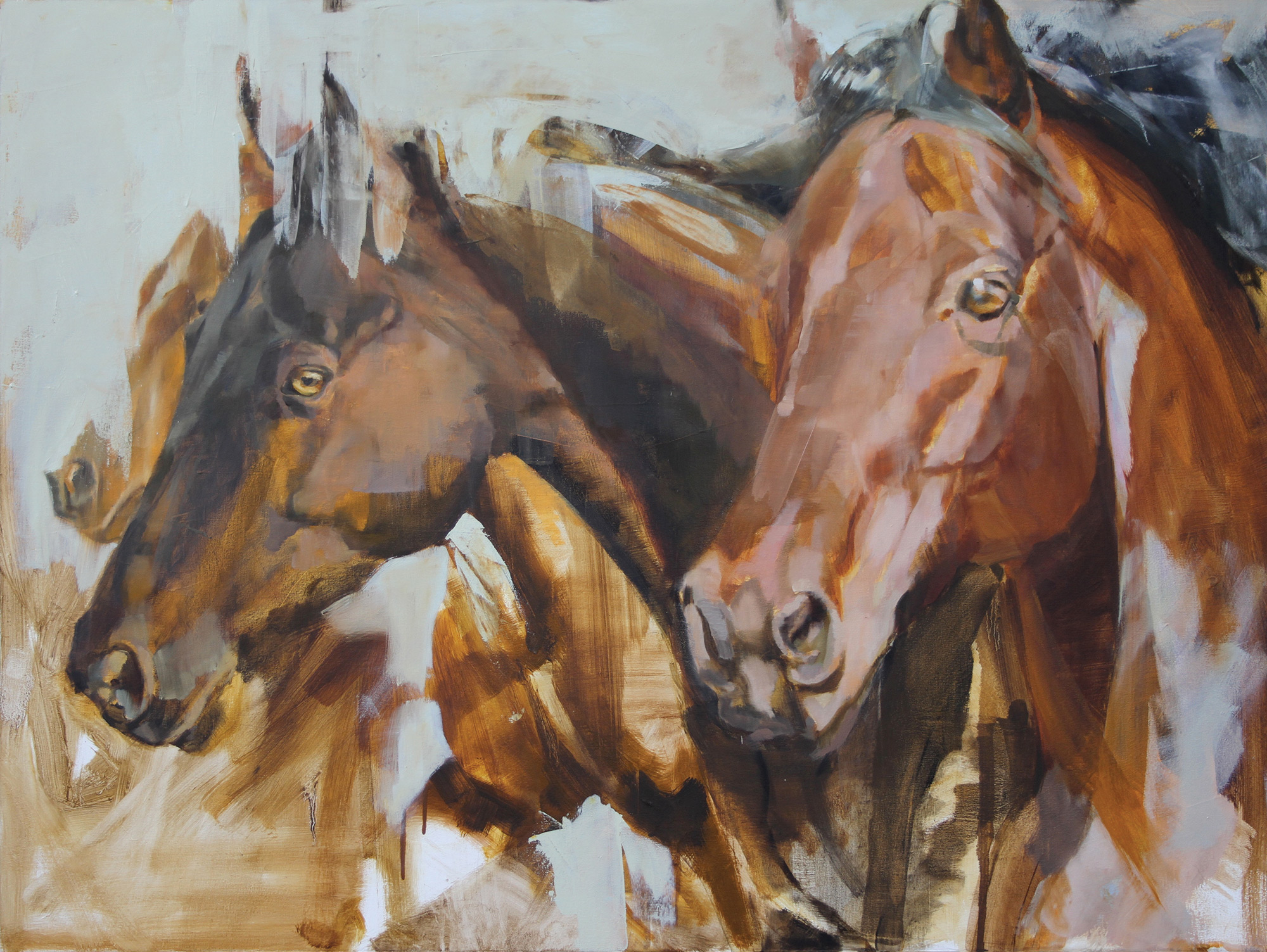