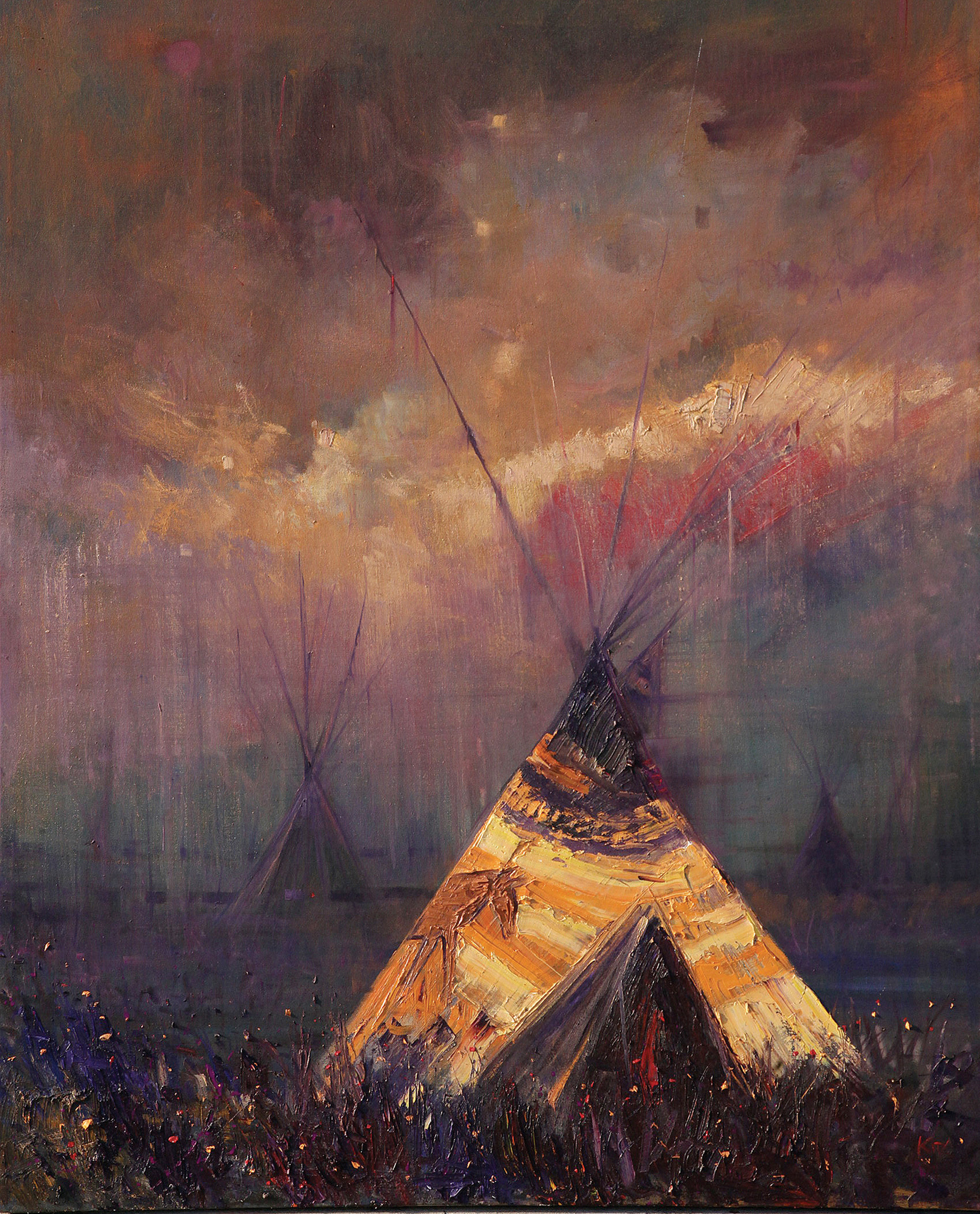 KIRA FERCHO PULLS INTO A TURNOUT in Gallatin Canyon. In the back of her pickup she carries a 5-gallon plastic bucket filled with paints, brushes, knives and a few small canvases.

“This is a spot I’ve been eyeing for a while,” she says, stepping out into the quiet morning, the river chatting behind us. “Painting is an excuse to be outdoors all day.”

As she sets up on the tailgate, laying out three blank canvases, a bald eagle skims above us and follows the curve of the river.

“That always means I’m going to have a good day,” she says. She dollops out color: ocher, white, alizarin crimson, two shades of blue and Van Dyke brown. The paint perches along the edges of a spare canvas, since she can’t find her palette. Defining her colors for the pieces she’ll paint is one of the key aspects of her work. “I’m looking and understanding the composition and the values. I could paint this in hot pink and people would know what it is because my values are on.”

What comes across in her work is a deep understanding of neutrals with pops of color, a strategy that stylizes her work and engages the viewer.

“For me, it’s like the broken chord in music,” she says. “What our minds and eyes want is to tie it together and make sense of out things. But it’s way more interesting than to just lay it all out.”

Her work, a freestyle impressionism, instills a kind of letting go. It’s easy to feel her spontaneity, the vibrant emotions that run through her and into the paint. Her use of fast, almost wild brush strokes evoke immediacy and her nearly neutral palette translates into a strong and honest sensibility.

“I’m an aggressive painter so I have to break away from a piece after a while,” she says, using her hand to mix and smear an underpainting that will help define her color values. “I usually work three pieces at a time so I don’t overwork any one piece. Then I can go back to them with a fresh eye.”

After giving one canvas a tonal coat, she moves to the next canvas, or what she refers to as her “little babies.”

“I’ll let them dry in my studio and clean up small areas, but I like the feel of them,” she says. “They keep that ‘back of the pickup’ feeling that’s very indigenous of where I’m at right now.”

The second of the small pieces is done all by knife and she turns the canvas vertically, to catch the towering pines guarding the willowed river banks. Across the river a busy stream falls over several ledges of rock, frothing the flow and adding to the conversation. All this she catches in several quick slashes of darkened greens from her swirling palette.

At 31, Fercho can’t believe the chances she’s taken and the road she’s followed to become a professional painter.

“I knew I was supposed to be painting,” she says, going back to the paint with the tip of her knife. “This is so unreal to me. Five years ago I was a single parent working full time, getting my master’s degree. I was beyond broke. My car was 7 years old when I got hit in a parking lot. I remember thinking, ‘Thank God, I can use the insurance money to pay for a semester at school.’”

She got her degree as a licensed therapist doing trauma work with teens, and still puts in one day a week, pro bono, with local teenagers. But when she decided, after getting her master’s in counseling, to quit her job and take a chance on painting, she was worried.

“My mom said ‘Nothing, no job, is secure,’” Fercho says. “And she’s right. She’s always believed in me.”

Gallery owner Betsy Swartz was introduced to Fercho’s work through another artist.

“I wasn’t searching for artists but [her work] struck me as new and fresh,” Swartz says. Now she represents Fercho’s work at Betsy Swartz Fine Art. “We were still in a recession and art wasn’t selling, but when she came across my desk her work was so juicy. It was a bright spot on the horizon that got me excited again about selling art.”

Because Fercho’s career is on the rise and her work is still affordable, Swartz believes it is perfectly suited to the current economic environment.

“She’s launching her career at a time when everything is being redefined and renewed,” she says. “Everybody’s careers transformed during the recession, which allowed them to open up to new things. I am seeing a trend toward the modern work, more contemporary landscapes.”

A case in point is Fercho’s large attention-grabbing canvases.

“Her work is unique and she’s an outside-the-box thinker,” Swartz says. “She’s not afraid to mix the paint around. … If you watch her work, the painting doesn’t take shape right away. You’re not quite sure what’s going to happen. Then, all of sudden, the bright colors, turquoises and oranges, come in. That’s when she starts to define the painting — the mountain and the trees — those gems of color make the painting come to life. It tells you about her — the pops of color are just like her pizzazz.”

Besides selling her work at various Western art auctions, including the C.M. Russell show, Fercho recently did a series for the Billings Clinic of 12 tipis, each representing a federally recognized tribe in Montana. Fercho is known for these tipis, mostly because of the amount of truth and detail she puts into each one. For example, in her Blackfoot tipi she includes the birds and animal spirits that came to the Blackfoot in their dreams.

“The Blackfeet prefer to use the word lodge instead of tipi,” Fercho says. “They call their lodges niitoyi. These designs all had a spiritual base. The Blackfeet would paint these animals on their lodges for protection.”

Fercho makes a point of studying each tribe and their tipis before starting a single one. It shows her dedication to the people of Montana and her deep respect for Native American tradition.

“I watch people stand in front of her tipi paintings and emotionally connect to them,” Swartz says. “Her true soul comes through in those paintings, because she’s so close to those stories. It’s part of our country’s story. And she does a good job of connecting people to that story, which is so powerful.”

In her Blackfeet tipi painting, the sky oozes red and the earth, infused with wildflower colors, ground the lodge. Across the side Fercho includes a horse, because the horse has a special meaning for her.

“It’s the last horse I owned,” she says. “I was 21 and my father took the horse to be sold at a sale barn without asking. My mother called and told me that my horse was going to be sold that afternoon. I went down to the sale barn and told the brand inspector that it was my horse and no one else could sell it. I paid the fees and paid a cowboy to bring my horse back to my dad’s house.”

Her father was upset and told her she had reached a new season in life having just had a daughter and would no longer be able to do things that were risky.

“We found a compromise with me giving my horse away,” Fercho says. “I’ve always thought that this story, and this horse, were a symbol of my spirit. They travel into many of my paintings. This painting was my piece for the C.M. Russell live auction last year. It broke a financial record for me. I can’t help but to think that it was because this horse’s spirit resides in my studio.”

Back along the Gallatin, the blue-gray of the sky glints off the water and is echoed in her blue-tinged third canvas. She’s switched from one to the other over the course of an hour or so, until finally she takes off her gloves and begins to toss her supplies back into the bucket.

“I’ll get one outstanding painting out of these,” she says. “One will be crap and one will be blah. That one I’ll keep as a memory of the day.”

This winter Fercho and her new business partner, Lori Elliot with Elliott Design, will be sharing space in Big Sky. Fercho hopes to create an artist studio gallery there. As with the many things she does, she’s jumping in with both feet. 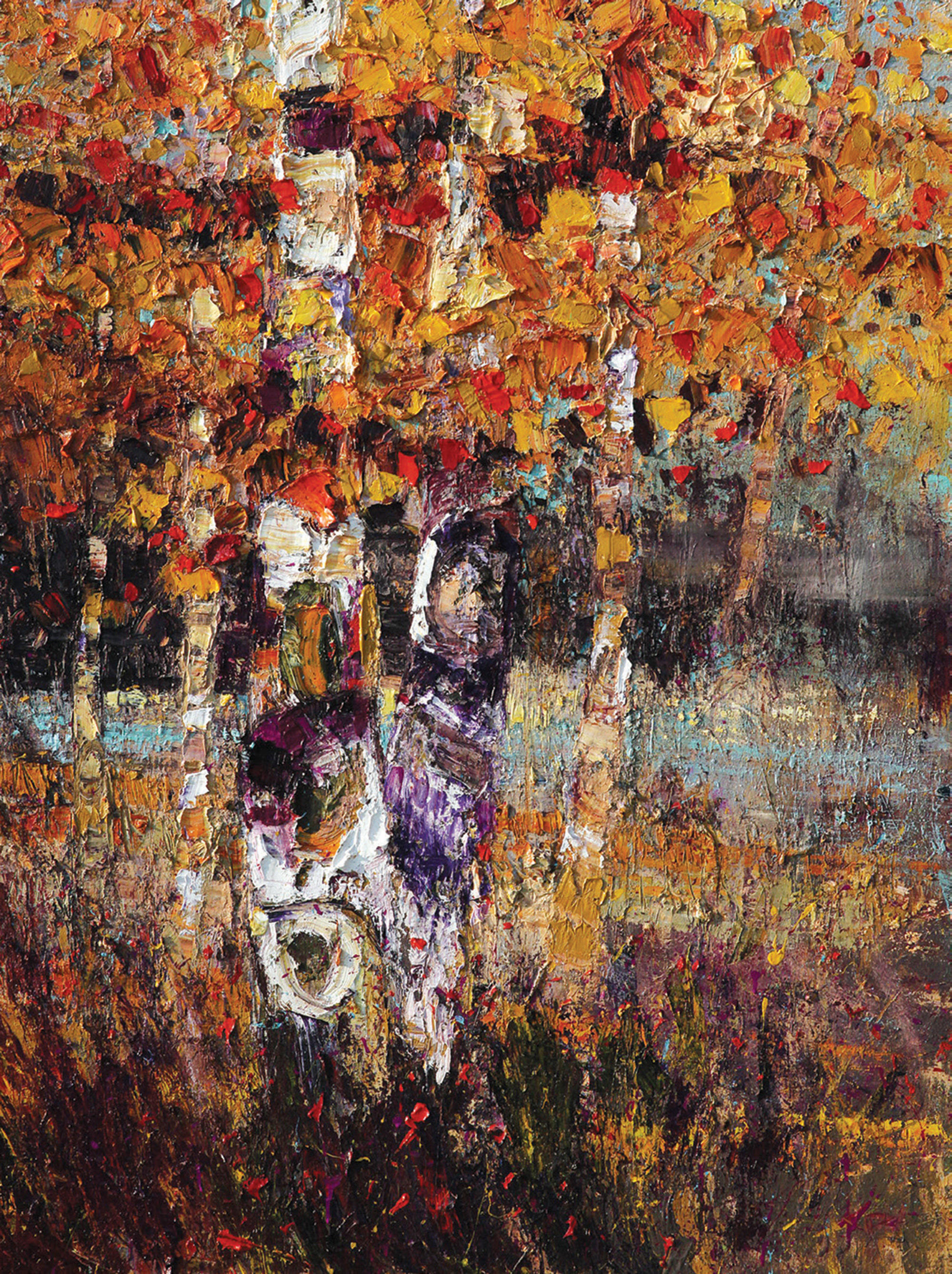 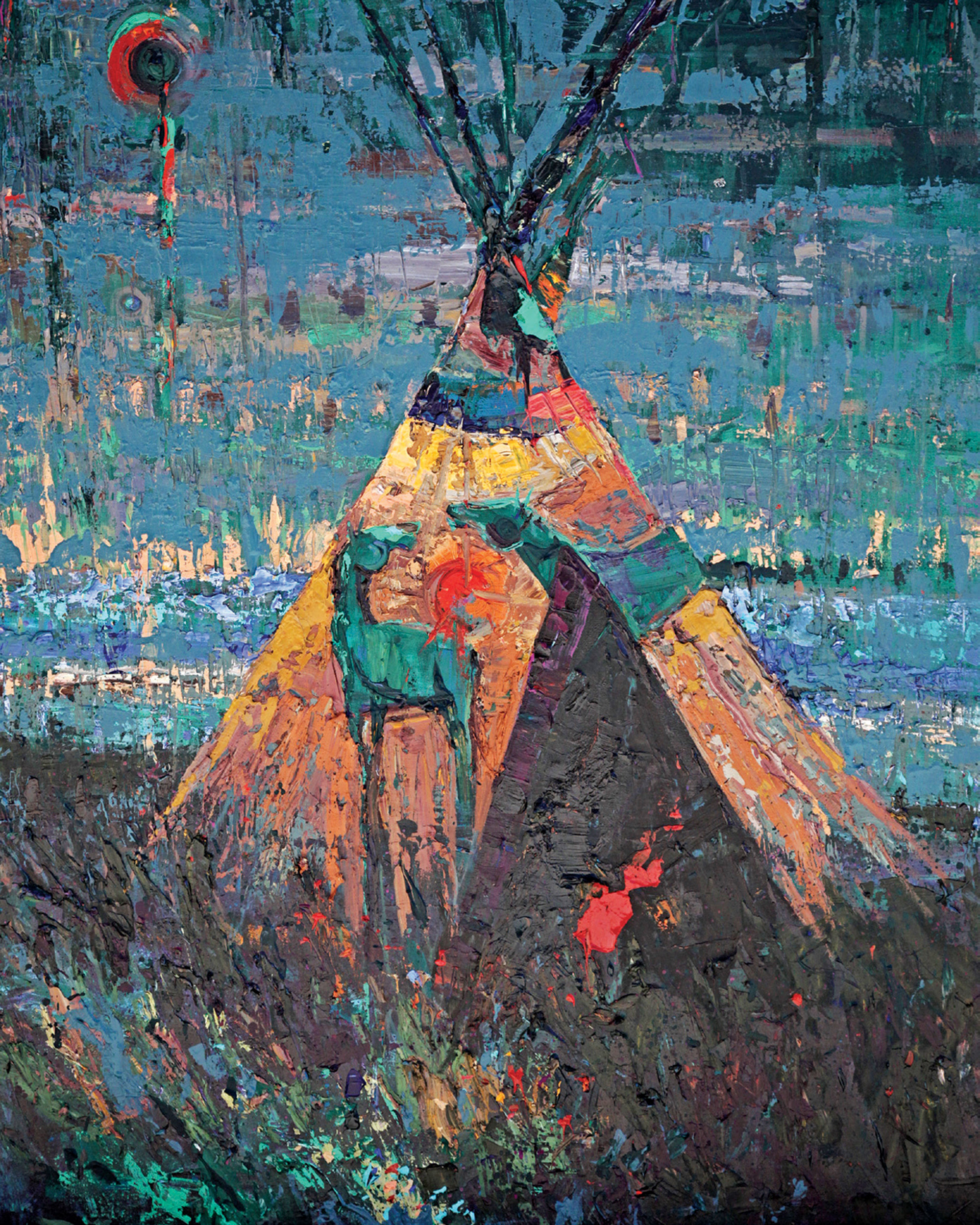 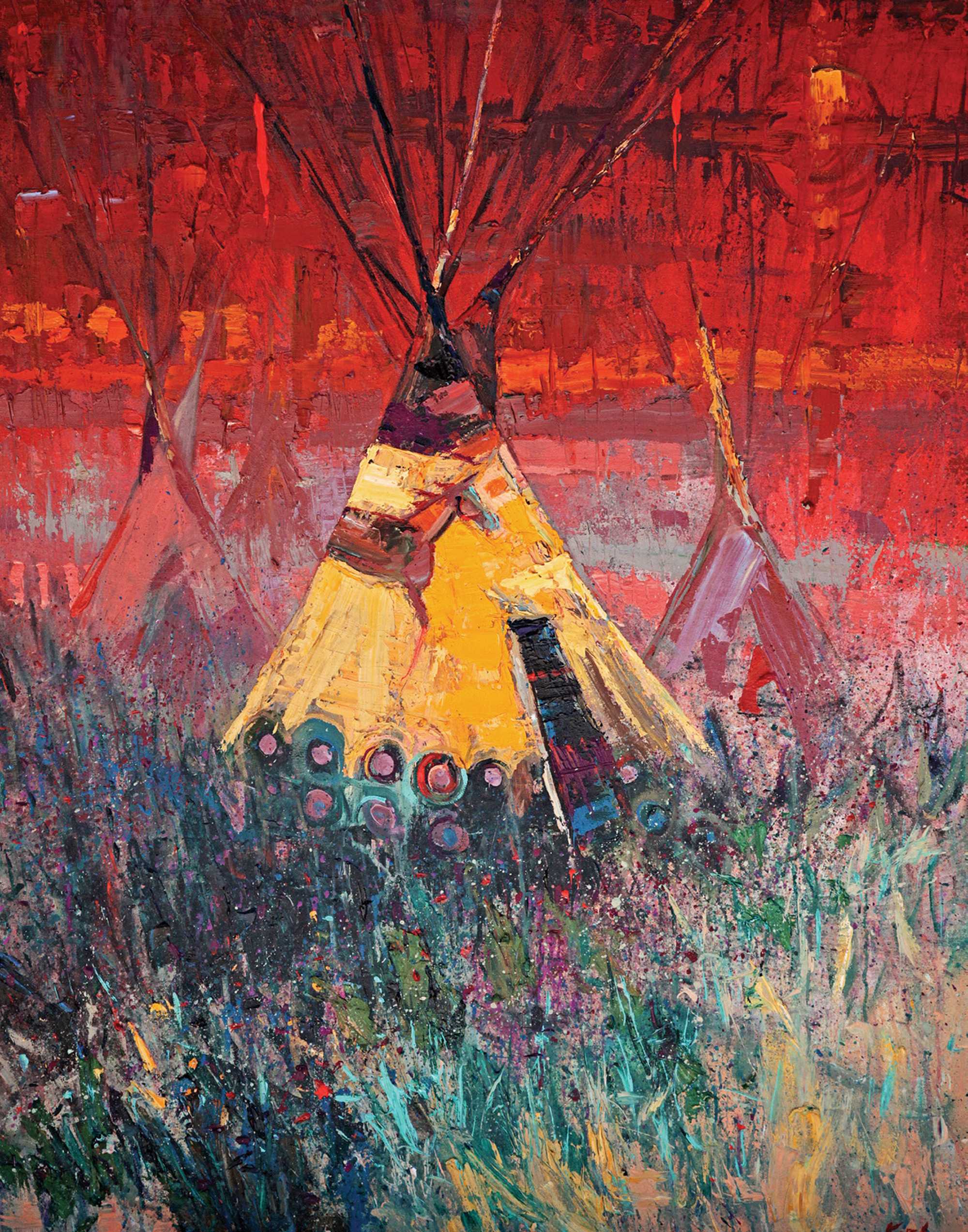 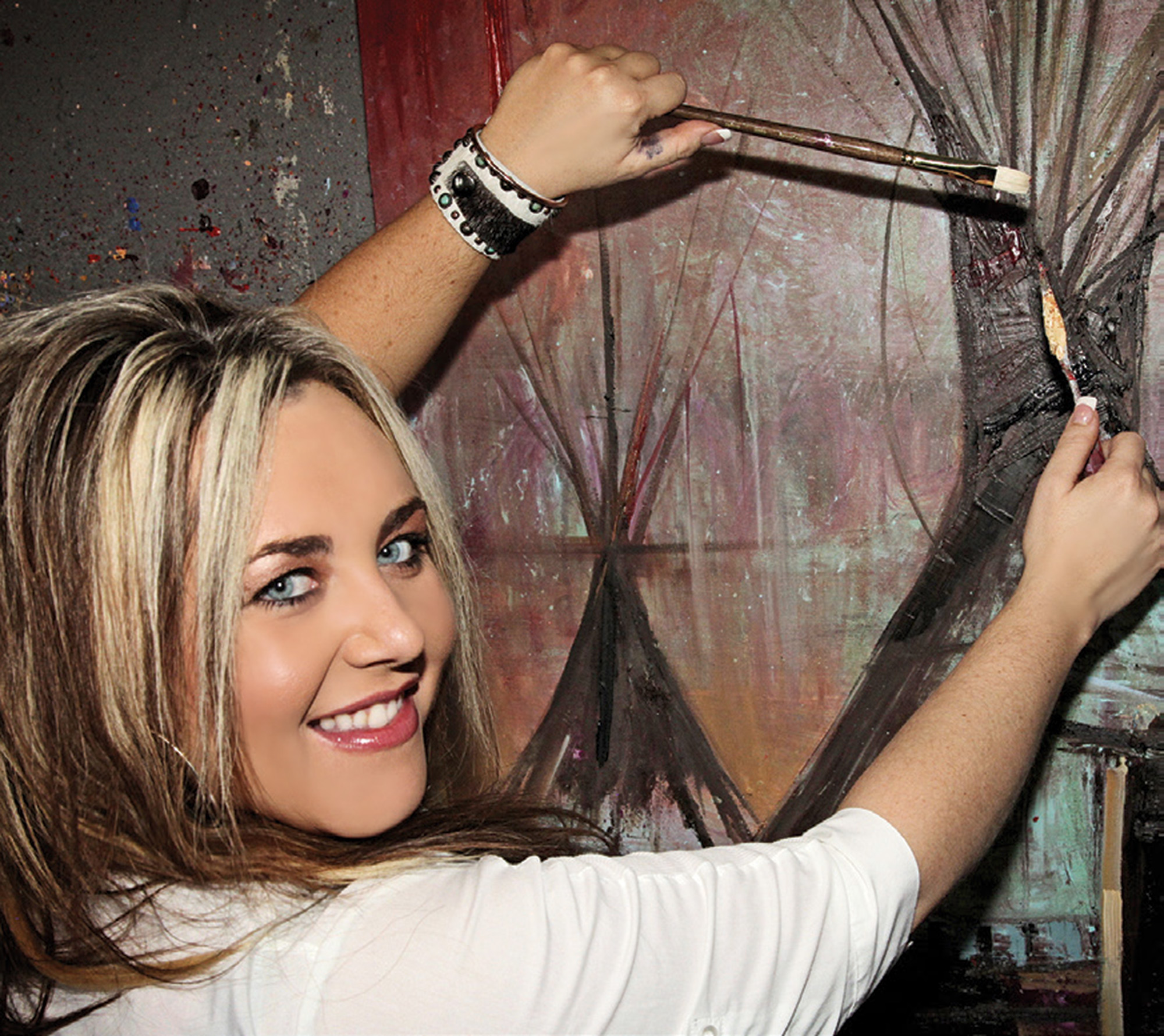