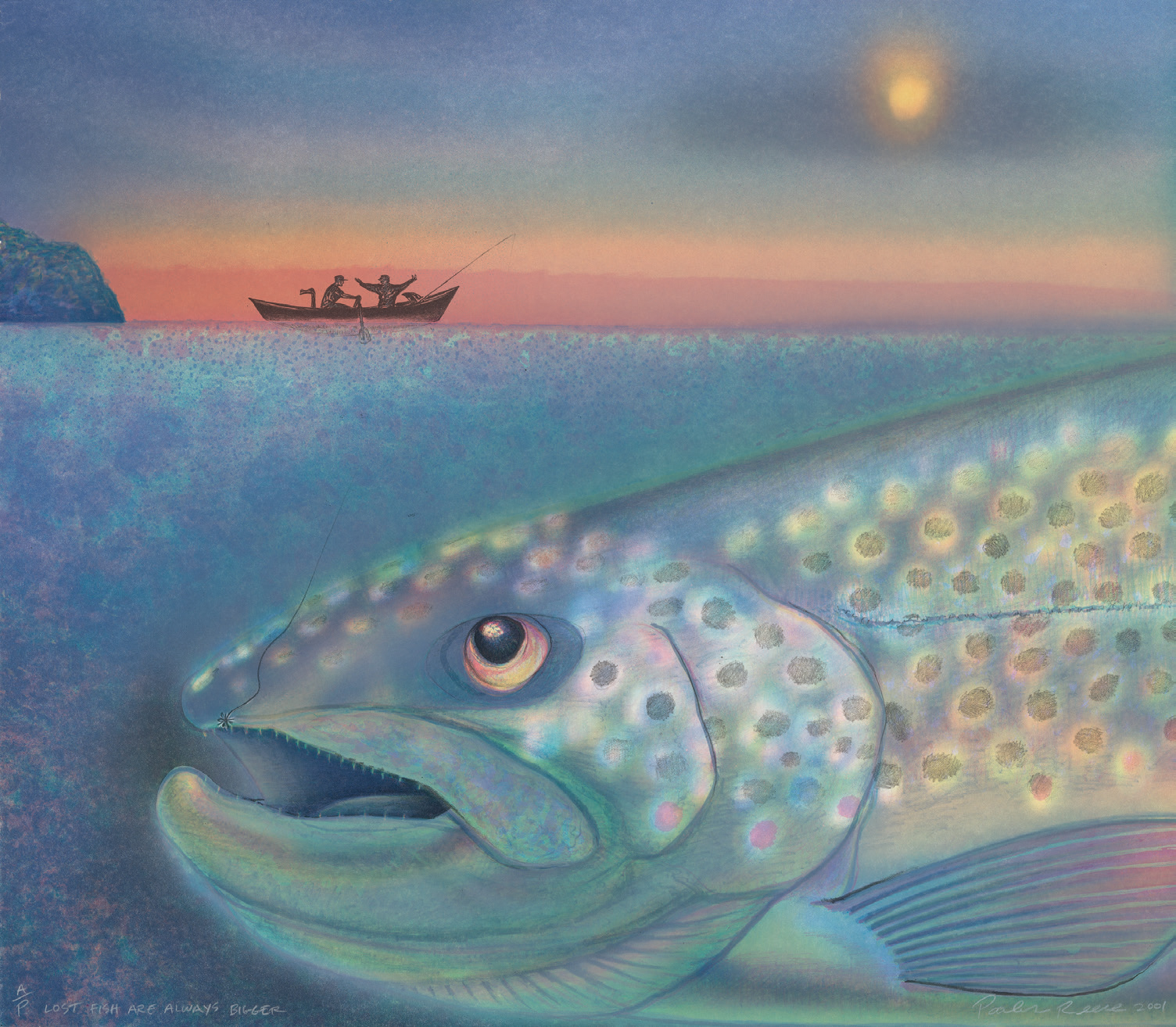 In 2013, the newly-elected governor of Montana, Steve Bullock, commissioned artist Parks Reece for a painting to be unveiled at his inauguration ceremony at the state capital building in Helena. “I did a weird one,” Reece says. “I mean, I was surprised. [Bullock] gave me his private phone number, his cell number, and said, ‘Keep checking in with me. Tell me what you’re coming up with.’ And so I did. And what I came up with was a painting of him riding a grizzly down a riverbank with fish jumping in the river. And he wanted the title to be A Bright Future for Big Sky Country. I wasn’t thrilled about the title, but anyway, at the last minute, he said, ‘You know, maybe you better not put me on that grizzly,’” Reece laughs, “so I changed the face to a friend of mine.” 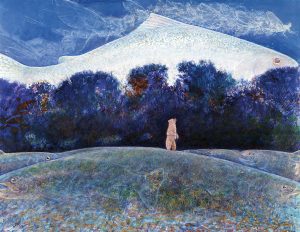 The painting hung in the state capital for years, and during Reece’s nearly 40-year career as a professional artist, many other Montana politicians have included his work in government buildings. “The previous governor [Brian Schweitzer] had my art in the capital, and so did the speaker of the house,” says Reece. The former U.S. Ambassador to China and U.S. Senator Max Baucus hung Reece’s work in the embassy in Beijing. And current U.S. Senator John Tester has Reece’s lithograph Call of the Wild in the entryway to his office. The scene depicts an elk bugling into a phone that’s dangling from a tree branch, with mountains, hazy cloud cover, and a small moon rising in the distance.

It’s no coincidence that Reece’s art was selected to represent the state again and again in this official capacity, as his work has always been “in direct conversation with the region,” as he says. And for decades, the artist has taken his “subject matter and humor right out of the wilds and culture of Montana.” 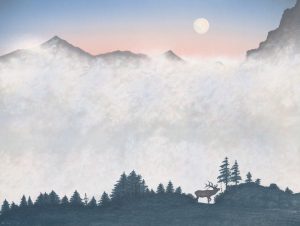 Driven by an impulse to respond to the world, Reece explains that he dabbles in “modern mythology by juxtaposing the old myths of the West with the new things that are going on.” His paintings, lithographs, and prints often use humor to address current events and social issues, such as overdevelopment, loss of animal habitat, environmental concerns, and the pandemic. The artist has found that humor helps viewers think about serious issues with some levity. “A spoonful of sugar helps the medicine go down,” Reece says.

“Building a Zoo” radio host, Mike Haymans, is a friend and collector of Reece’s since they were college roommates at East Carolina University in 1972. Over the years, Haymans has acquired some 60 works, and he notes that Reece has a broad appeal. “They’re always a point of interest when people see them,” he says. “Some of them are whimsical, some you’ll just laugh out loud, some are very poignant.” 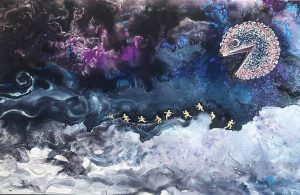 The artist’s creative process generally begins with an idea or issue he wants to address, and then he thinks up an image to represent that idea. “I like puns and word play. I’ve always been like that since I was a kid,” Reece says. “So, when something comes to mind, then I think of a good painting to illustrate that. I’m not just going for the idea, I’m going for a good idea and an accurate statement on culture, wild places, and a beautiful painting — a well-executed painting.” Once he knows the subject matter, he will choose his media, either paint or a limited-edition lithograph, to convey that idea. 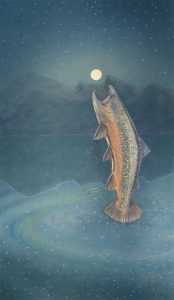 Reece was born in Wilkesboro, North Carolina in 1954 and was interested in art by the age of 3. His mother, noted artist Gwyn Finley Reece, and her friend Ruth Faison Shaw — an artist and educator who invented finger painting and widely introduced it to American schools — were among his most significant influences. Reece recalls Shaw telling him that when you paint on a piece of paper, the artwork comes from the place where dreams originate. “That blew my mind as a little kid. She did me a wonderful favor because I have always thought of it like that,” he says, adding that he also credits his mother for instilling the importance of creativity early on.

Reece studied art at East Carolina University and the Universidad Nacional in Costa Rica before ending up at the San Francisco Art Institute, where he earned a Bachelor of Fine Arts in printmaking in 1977. He first came to Montana in his early 20s, when members of the Crow Nation invited him to help high school students paint murals throughout the school in the town of Lodge Grass. “[Montana] was magical to me… I thought I was just visiting, but I stayed,” Reece says.

He moved to Livingston in 1980, and met artist Russell Chatham soon after. He became the director and curator of the Danforth Art Center, where one of his first jobs was helping Chatham set up his exhibit. “I got to be in close company with him,” Reece says. “I was kind of a kid… he was about 15 years older than me. I was the youngster helping him hang his shows and do stuff, and he invited me into his lithography studio. He was considered one of the world’s best lithographers at that time… And so, I got to learn from him, and look at his work, and work with some of the best lithographers in the world, and that really propelled me.” By 1997, Reece began his own series of limited-edition lithographs, produced at Chatham’s studio, Deep Creek Productions.

Reece continues to make his original and print artwork available at his downtown gallery in Livingston, and for the last “several decades,” he’s lived surrounded by the mountains he loves and near an abandoned coal-mining town from the 1800s. In this landscape, his love of Montana history meets his love of the outdoors as an avid hunter and angler. Nature’s solitude provides space for Reece to contemplate the world around him, offering quiet moments for reflection. The natural world “feeds my whole artistic instinct,” he says. 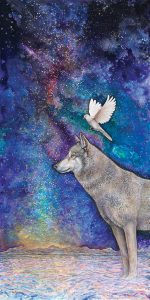 Reece’s creative philosophy has always been driven by doing the best work he can and trusting his unique perspective. “I heard someone say once, you gotta be yourself because the other selves are already taken,” he says. “I truly love doing what I do. I guess I’m lucky that way.”

Christine Rogel is a freelance writer, managing editor of Big Sky Journal, and editor in chief of Western Art & Architecture. Her first book, A Collection of Ghost and Folklore Stories, is available from Globe Pequot Press; christinerogel.com.