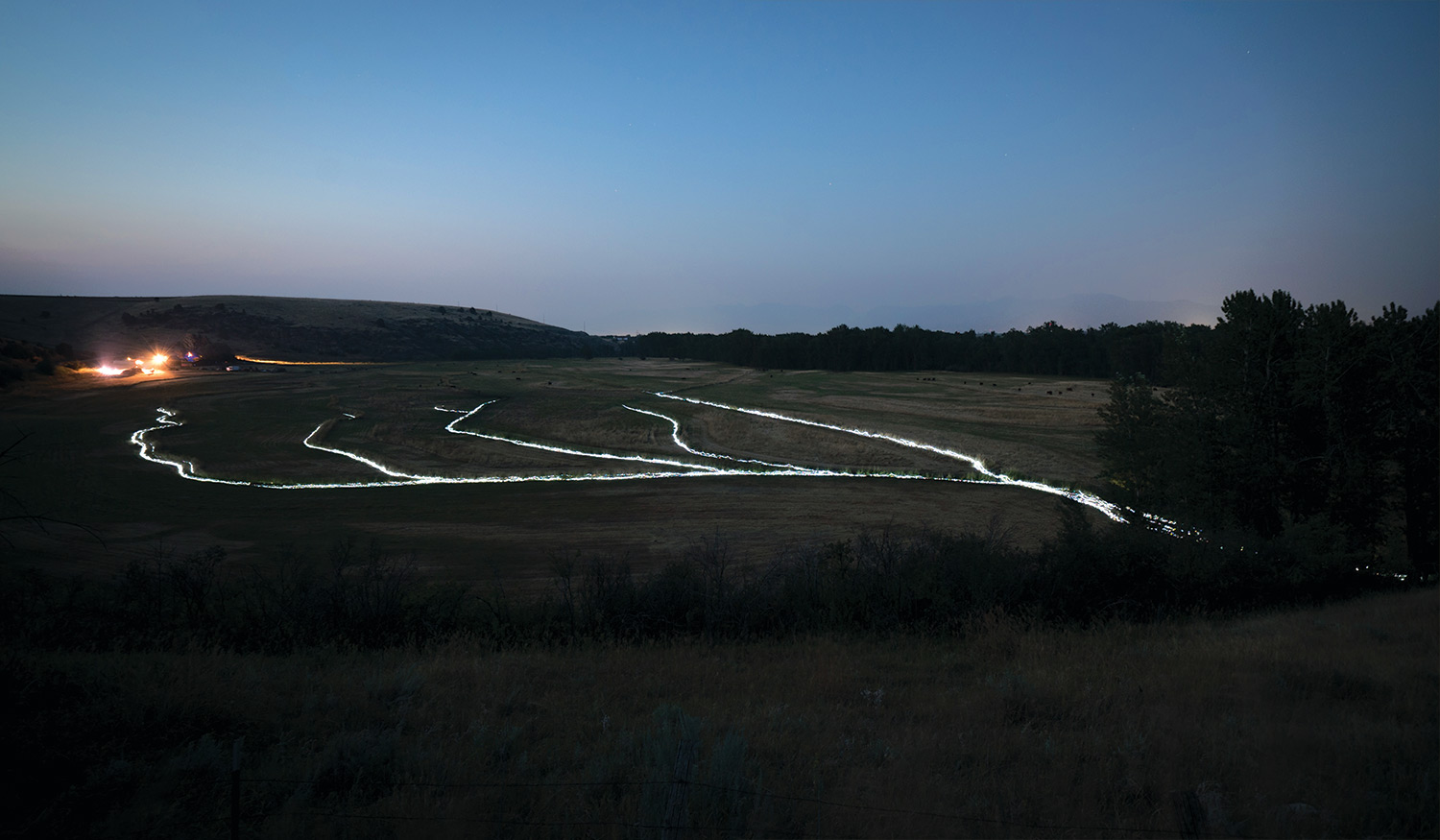 We descended from the school bus onto the rugged dirt road along the border of the Kelly Ranch west of Bozeman, Montana. On this, the third night of Mountain Time Arts’ WaterWorks performances, the crowd was the largest yet. No one who showed up for this evening dedicated to the fusion of art and science, agriculture, and history was turned away. 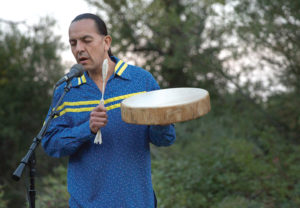 As we gathered in front of an irrigation regulator, we were called by a steady drumbeat. Next to the canal, Shane Doyle, a Native American scholar and musician, sat beating a drum and singing. A string of men walked purposefully across the metal headgate and pulled sticks from their pockets. Doyle’s solo drum faded as the four men began beating rhythmically on the metal, ramping up the momentum until we all began to move with the music. Behind them, three water drummers appeared in wet suits, standing in the Gallatin River, slapping the water and adding depth to the symphony.

The gathering of 130 people broke up into groups and each group was assigned a guide. Finding our group among a dozen different guides from agricultural and indigenous communities, we listened to a brief talk on the water rights and the hydrology of the area by our guide, fluvial geo-morphologist Karen Boyd. Walking away from the headgate, we could see a group of three men with scythes on our left. We stopped to listen to a recorded voiceover by Carl van der Molen, a rancher who discussed the change in climate over the years. Then Boyd took over the narration. In a soothing tone, she told us about the beavers in this region, how their disappearance from over-trapping helped to cause the dewatering of the valley. 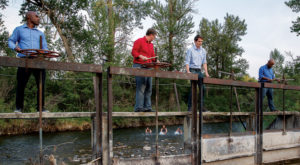 At this point, we were two scenes into a five-scene performance. The next scene required the audience to move, transforming us from passive watchers to engaged participants. Meandering from one scene to the next, all 130 of us began to realize this was something rare. An event. A happening. One side of our brains absorbed facts while the other side took in the beauty.

The Mountain Time Arts team — including art historian and co-founder Dede Taylor, architect/artist and co-founder Jim Madden, as well as international installation artist and Butte native Mary Ellen Strom — spent two-and-a-half years conceiving this art project, walking the land, talking to ranchers and hydrologists, conservationists, and historians. For all of them, the site of the Kelly Ranch, just west of Four Corners, contained everything they wanted the project to address: It encompasses one of the oldest irrigation canals in the Gallatin Valley; is home to two natural springs; it is the site of a former buffalo jump; and it held a trail once used by Native Americans. 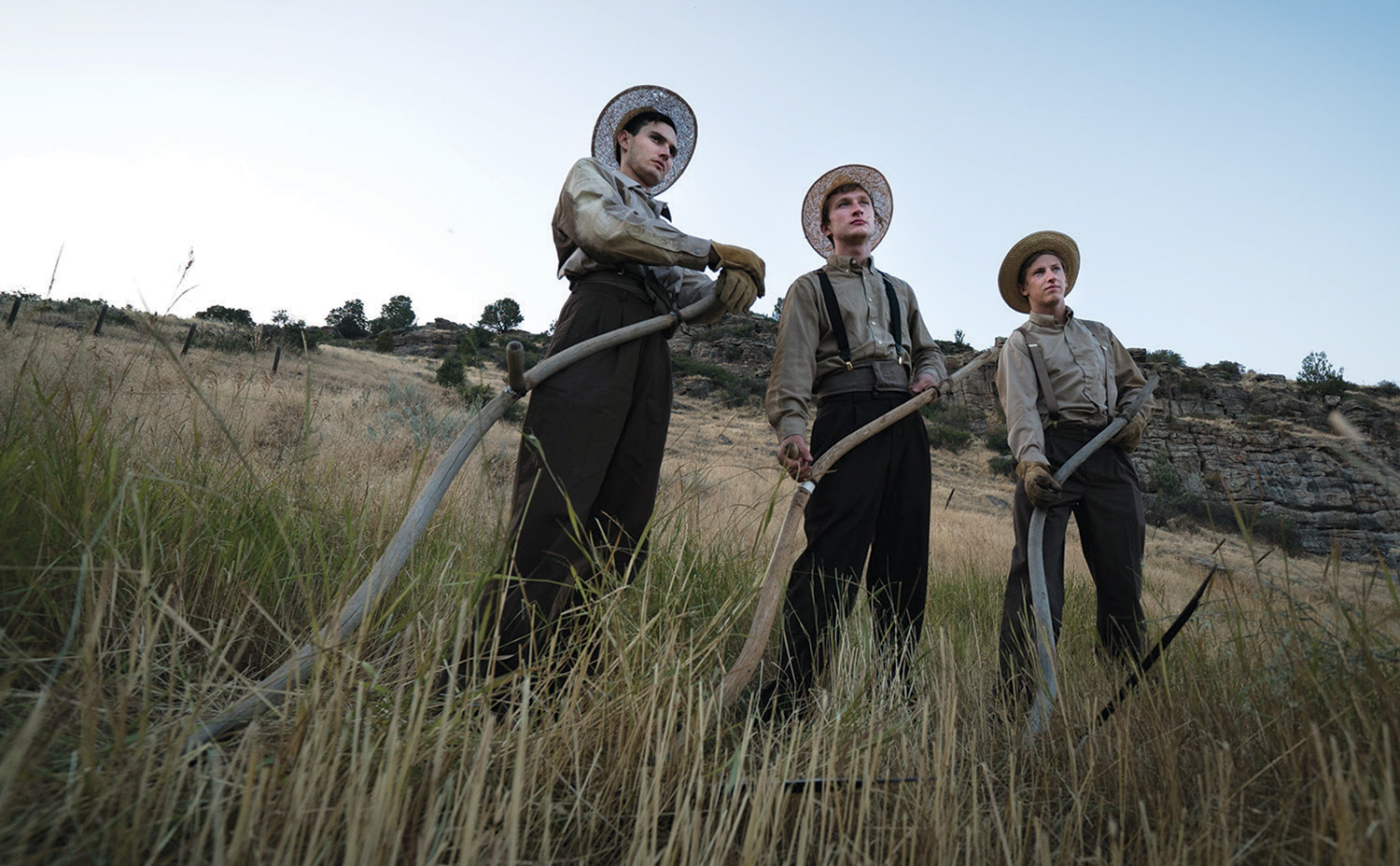 Mountain Time Arts brought together the aesthetics of art, the science of irrigation, and the narrative of community in a performance at Gabriel Canal. Photo by Ben Lloyd

“One of my goals was to unify a group of diverse people,” Strom said. “First and foremost, the people in the project felt an ownership. I wanted this to be a real exploration, an opportunity for people to learn as well as teach.”

As we moved on to a barn area with stacked bales of straw arranged like an amphitheater, our anticipation mounted. But before my friend and I followed the others, I overheard one of the dozen guides talking about the photographer perched on the hillside. Lit up in pink, like a sepia-toned artifact, the tableau was meant to remind us that this land was inhabited long before Manifest Destiny brought settlers West. 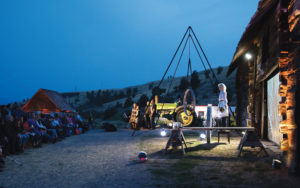 “My group was called Standing Rock,” guide Francesca Rodriguez, who is Crow and Northern Cheyenne, said afterwards. “The impact of the photographer/artist on the history of this area was devastating.” She talked about the way the West was portrayed — as empty, as vacant, as unoccupied. “That was inaccurate. People did live here.”

Sitting down on the straw, we were enveloped by the night. Stars overhead pierced the velvet cover of darkness. We were ready for the third act.

A video showing scenes from the valley played on the barn door. Laine Rettmer, a dancer and actor from New York dressed in a skirt, cowboy hat, and boots, balanced on a wooden beam. She mouthed the words of the video’s narrator, Al Lien, vice president of the Association of Gallatin Agricultural Irrigators, who described a time when water rights were dealt with outside the courts. He spoke about the weather, the seasonal changes and, with a bit of nostalgia in his voice, looked back on his years working in the field. 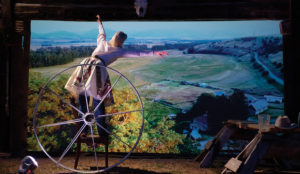 Dance and video, music and story, combined for a unique way to experience the nature of water. Photo by Jason Berlage

As Rettmer finished up, dancer Michael O’Reilly gently placed the sole of his boot on the rim of an irrigation wheel hanging from an overhead pipe and slowly pulled himself up. He spun, pivoted, and dangled. He walked in circles in the air to the voice of Travis Stuber, another irrigator. As Stuber told us about riding his dirt bike to check his irrigation pipe, O’Reilly’s movements added a sublime level of appreciation of life, of days lived off the land.

Filing out of the straw-bale bleachers, we made our way up the road. As we rounded a bend, we were presented with a group of actors performing a set piece inspired by an 1890 photograph of a harvest, with a voiceover by rancher Mike Gaffke discussing the underground water supply and the lifecycle of the aquifer.

All of this led up to the grand finale. As we came around the final curve of the inclining dirt road, in the dark of late summer, we were awed with an installation of 50,000 lights spread out over 65 acres. It was a sea of tiny, shining dots, a carpet of stars that followed the topography of the Gabriel Canal ditches. 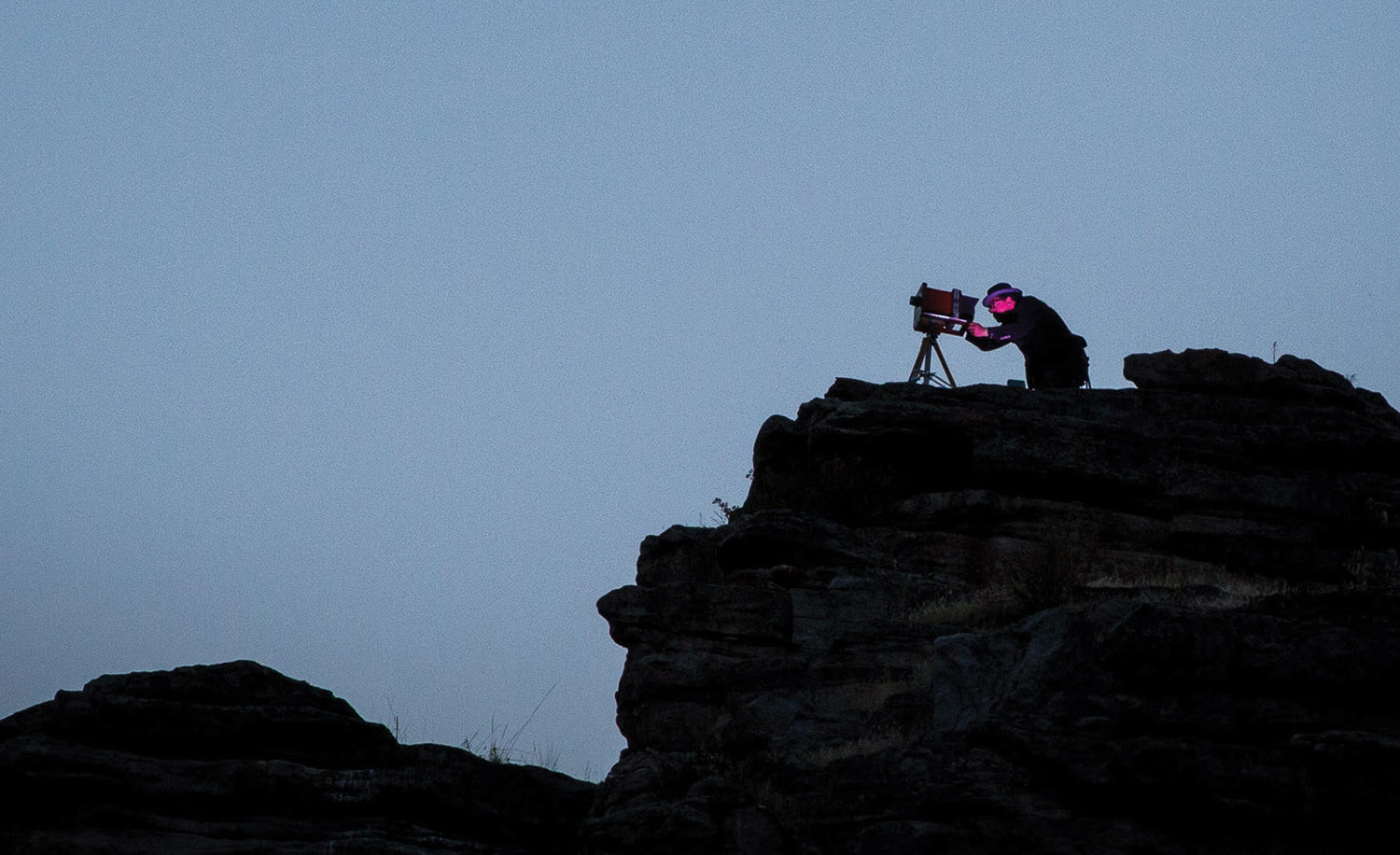 Kelly Ranch sits along the Gallatin River, where Native American populations long used the area for a buffalo jump and game trails. Photo by Christopher Boyer

“I knew when I first saw the site that I wanted to make the invisible visible,” Madden said. “The ditches are deep, and the haying has to be done in segments. I saw that pattern, and then I had to figure out how to do it.” 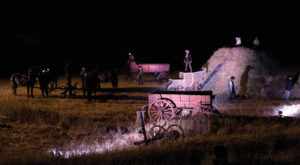 Through the re-creation of an 1890 harvest, performers bring history to life. Photo by Christopher Boyer

In this scene, there was no voiceover, no music. After all we’d seen and heard and felt, this was the time for reflection, contemplation. People stopped talking and the full impact of the final act of the night’s performances settled on us as we stood looking out at the Gallatin Valley’s winking lights. We had all come from different backgrounds — agriculture, conservation, and art; locals and newcomers; scientists and indigenous people — but here, at this spot, at this time, our differences floated away. For that one moment, we were connected by water.