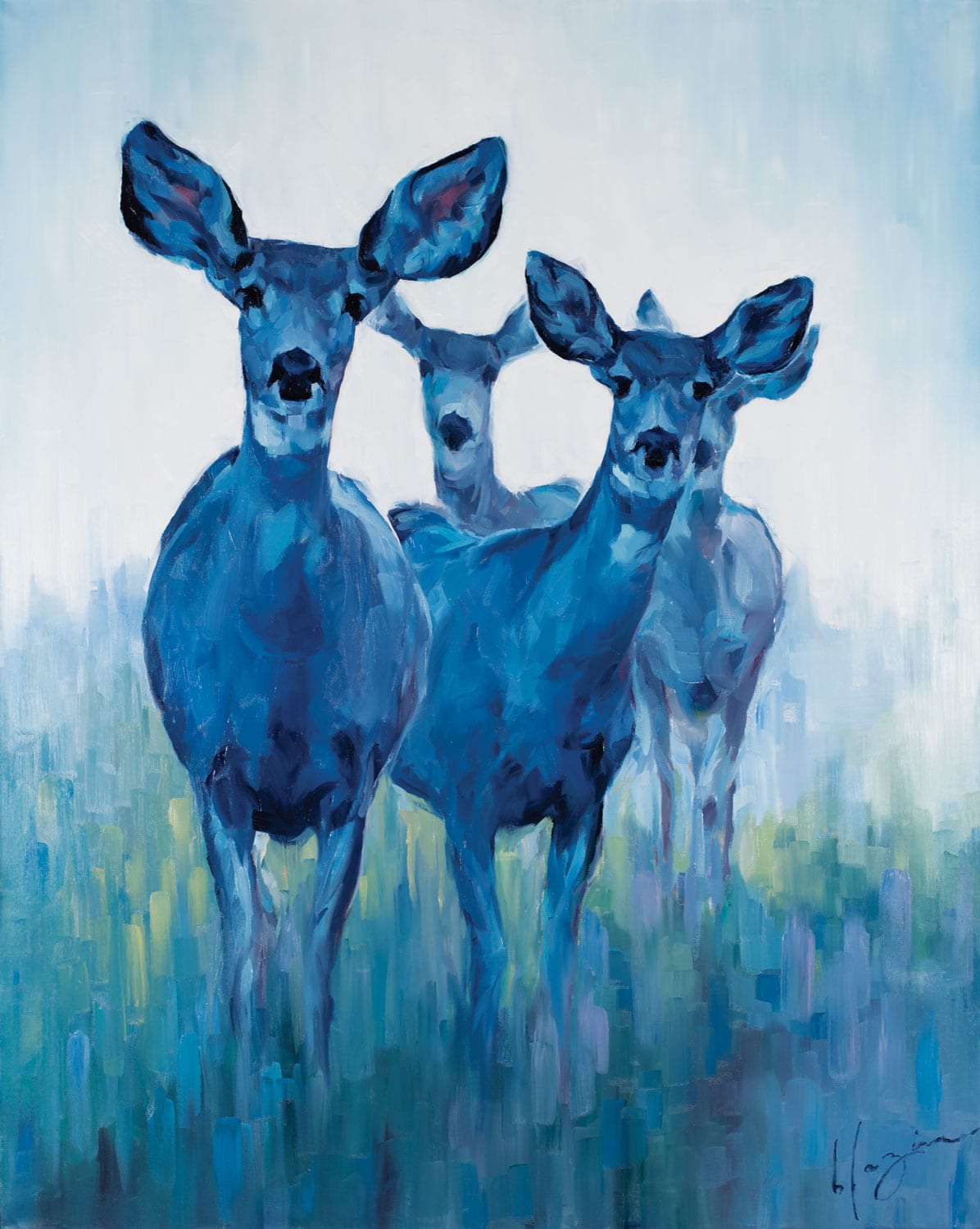 in Artist of the West | Summer 2019 | Written By: Seonaid B. Campbell | Photography By: Melanie Maganias Nashan and John Zumpano Posted at 19:20h 0 Comments
Share

Charting her own course in the world of fine art

Amber Blazina’s brush flies from palette to painting. Her mind is focused, but her body shakes with adrenaline. She’s participating in a quick-draw at the Out West Art Show in Great Falls, Montana, during Western Art Week, and the gun of time is drawn. She has only 60 minutes to create a painting. An anxious crowd watches her as though she’s a magician while she manifests an animal on linen. It’s a bison, belly-deep in snow, head hung low on a stalwart mission.

With mere minutes left, Blazina glances at her laptop. There, a photograph she took of a bison is open in Photoshop. She clicks on a second layer in the software and a magpie appears on the bison’s back. Onlookers gasp. Blazina adds the bird to her painting. Ding! Time’s up. The crowd cheers. She has pulled it off. But it’s not magic, it’s an exquisite 12-by-24-inch oil painting titled Two for Joy that later sells for $2,000 at auction. 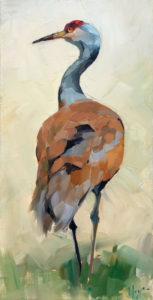 With immense natural talent and a flair for engaging her community of supporters, Blazina has earned awards, gained collectors, and is represented by Montana Trails Gallery in Bozeman, as well as the Nancy Cawdrey Gallery in Whitefish, Montana. She also attained certification through the 2017 Montana Arts Council Artrepreneur Program. Yet, she has been painting professionally for only three years.

To what can she attribute her meteoric success? Every moment of Blazina’s life up to this point has prepared her to be a painter, and not in the ways one would imagine. It took years of working as a freelance graphic designer, while also battling Post Traumatic Stress Disorder from events that occurred in childhood. In other words, it took hard work inside and out. “I’ve been given a gift but had to go through harsh spots to realize it,” she says of her transformation out of a metaphorical chrysalis and into the world of fine art.

Blazina is younger in appearance than her 39 years, and her vibrant, aqua-green eyes reveal hard-won wisdom. A native of Eastern Montana, she grew up “in the middle of nowhere” on a wheat farm, and attended a two-room schoolhouse where she was encouraged to be creative. She later graduated from the Art Institute of Colorado, but there everything was done on computers. “We didn’t paint or draw,” she says.

Working as a professional designer honed her eye and taught her composition as well as business savvy. “A lot of graphic design is layout: negative space, expression, movement,” she says. Given her aesthetic, it’s no surprise that she admires artists like American impressionist John Singer Sargent, and contemporaries Kara Tripp of Bozeman and Carolyn Anderson of Havre, both whom she has done workshops with. Fashion icon Alexander McQueen’s creations also spark her imagination. “He was so edgy and emotional and not always well received,” she says, “but he kept on doing his own thing.” 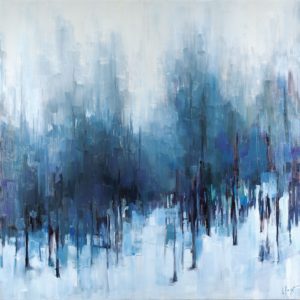 Blazina’s thing? Not Western art, per-se. She says of her paintings, “This is my West. This is how I grew up. No cowboys. No Indians, or red hills in the distance.” Nor is she strictly a wildlife artist, although wild animals are her frequent subjects. Instead, she’s charting her own course by freely incorporating approaches and techniques of Impressionism and Abstract Expressionism, as well as seeking feedback from trusted advisers, like Anderson, her mentor, and Tim, her husband.

The physicality of painting excites Blazina: making bold strokes with a broad brush, defining edges, selecting and blending colors. Her palette of Winsor & Newton oils is limited; at its base: phthalo blue, viridian, and alizarin crimson, with white to soften them. She works while the paint is wet. “I don’t over produce,” she says. 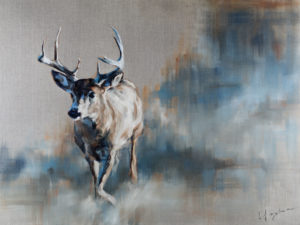 Blazina’s newest painting at Montana Trails depicts a solo bison on a large canvas. Titled Kick up Your Heels, it appears abstract up close but cohesive from afar. “I extrapolate the important things about a subject to convey the image without giving you everything,” she says. Maria Zabel, art adviser at the gallery observes, “There’s so much going on [in this painting] and at the same time, it’s just a buffalo.” Perhaps there is magic in Blazina’s brush.

With a style that is fast evolving, the painter is courageous in her experimentation while also confident in her artistic ability. She says, “I paint what I think will look good.” She’s now also sure of her state of mind, having pushed back the demons and prevailed. Blazina now understands that life, like painting, is a practice in vulnerability. “It takes a lot of work to clear your mind so those instincts come through from your heart, to your brain, to your hand,” she asserts. Painting is her purpose, it’s what recovered her voice. Her expression of it leaves no doubt that Blazina will make a lasting impression on the art world.