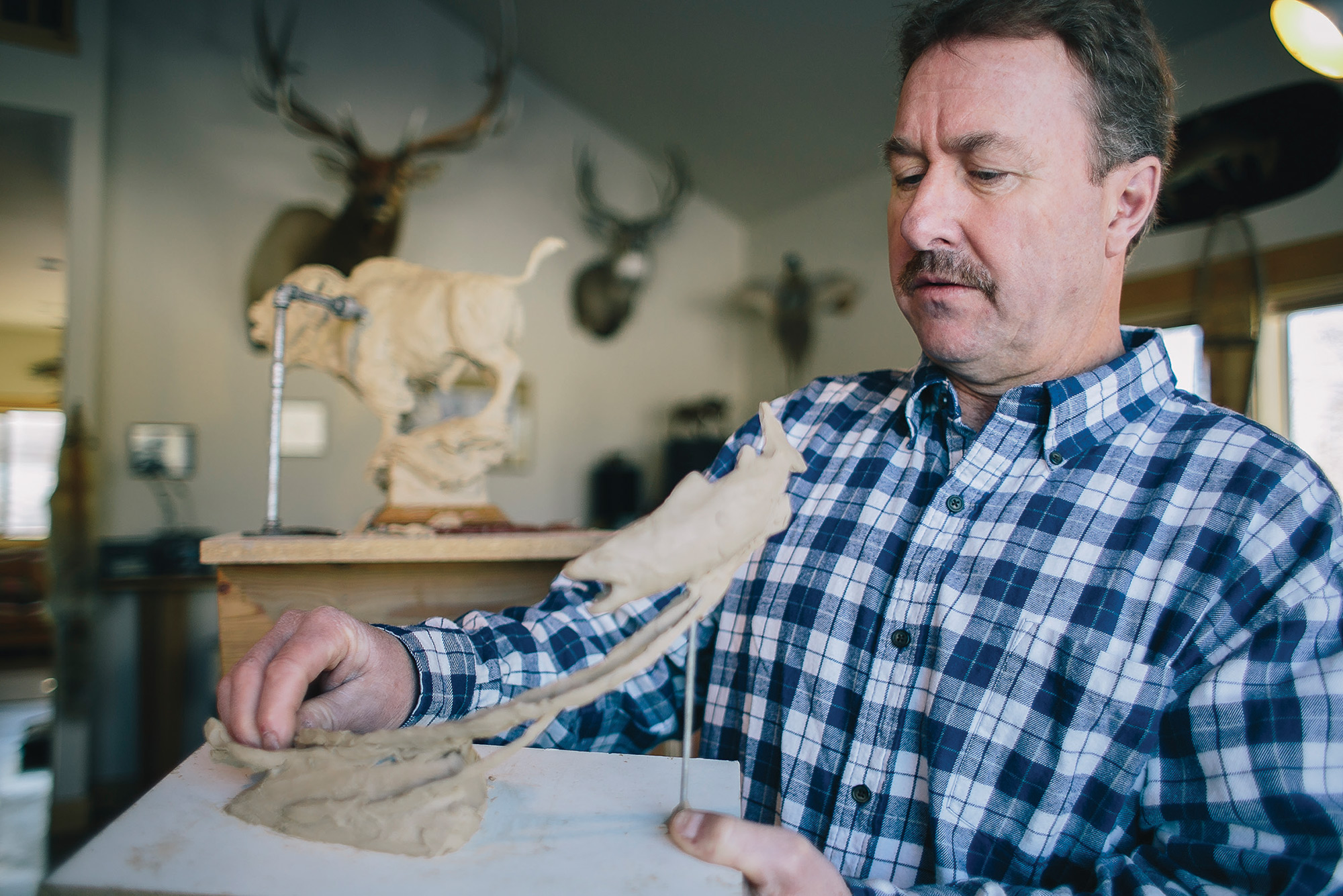 04 Feb Artist of the West: A Story in Clay

in Fly Fishing 2016, Artist of the West Written by Michele Corriel | Photography by Adrian Sanchez-Gonzalez Posted at 21:03h 0 Comments
Share

Ott Jones’s hands move with the cadence of memory as he renders the life he’s studied into clay, then bronze. Each addition of malleable clay, each indentation, each thumbprint pressed represents a moment. His work revels in imperfection to convey movement and deepen our understanding of nature.

As he works on Out of the Shadows, he elegantly portrays the swoop of grass moving in a quick stream. Jones orchestrates a rhythm in his work, so the eye finds a place to land, linger and move on.

“I try to create a pleasing composition, looking at how the piece is assembled, the form, mass and space it takes up,” he says, picking up a wooden sculpting tool and pressing it against the clay image of a brown trout, still on an armature in his studio. “I like to think about how all the elements correlate to each other.”

Jones brings his outdoor life into his Bozeman, Montana, studio. There he shapes the animals he’s known in the wild. Next to the working sculpture sits a very small, rough version. This maquette helps him figure out how to approach a subject, and stays nearby throughout his process.

“I always do two or three,” he says. “I’m not after detail with these. I’m trying to arrive at something that gets across what I want to say, in the way I want to say it. I may have an idea in my head and I may first sketch it on paper, but more likely I’ll go straight to the clay.”

Behind him, an electric turkey roaster keeps the clay soft. He reaches for a small wad and presses it onto the work, leaving a smooth line behind. The spotlights above him illuminate his workspace, so every tiny mark is clear.

“I’m trying to tell a story,” he says. “My objective is not to duplicate what I see, my objective is to interpret and convey my subjects using my eyes, my hands, my heart and through the inspiration I feel from my years as an outdoorsman.”

Sculpture, unlike painting, has to work in three dimensions. Jones knows this, and uses every side as another chapter in his narrative.

“This story is about the brown trout,” he says of the piece Out of the Shadows. “I want to strike an emotion with the viewers. At this point, the story is untold.”

And that’s what draws us in. We are engaged in the story at the climax of the piece. Will the minnows make it? Will the big brown trout eat today? Included in the story arc is the arc of the piece. It curves and plunges; our minds supply the running stream, the sweep of the current bending aquatic vegetation. In this way, Jones creates a dialogue within the piece.

“If I told the ending it wouldn’t be interesting,” Jones says. “I like to leave it up to the viewer. In nature, little animals have to hide and they have to be fast. But the trout has to eat to survive.”

It is this type of perspective that keeps Ron Malone a loyal fan. Malone owns several pieces and is a longtime follower of Jones’s work.

“I am a fly fisherman and an admirer of all things outdoors,” Malone says. “And to me Ott Jones strikes this balance between Realism and Impressionism that I like. His pieces are not devoid of detail, but at the same time they don’t have so much detail that it becomes distracting. Art that mimics photography is not interesting to me.”

It’s not that Jones doesn’t know his anatomy. That’s one of the first things he studies before embarking on a new piece. In fact, Jones’s foundational outdoor experiences began early in his life when, as a young man, he got a job on the Alaskan Peninsula as a fishing guide for three consecutive summers. There he witnessed the wild salmon runs, bears, wolves and all the wildlife that goes with that kind of lifestyle.

Those are the kinds of experiences that shaped his eye and landed his work in exhibitions at venues ranging from the Charles M. Russell Museum in Great Falls, Mont., to the Spartanburg Museum of Art in South Carolina. He has contributed to shows including the Allied Artists of America in New York City and the Plein Air Fest at the Jackson, Wyo., National Wildlife Museum. In between, he continues to explore his subjects in the wild.

Malone appreciates that Jones’s adventures show up in his work.

“He has a rare combination of artistic skill and perception married with outdoor experience,” Malone says. “The eye that he has … he’s able to see things in a new way. When some artists draw or sculpt fish they are absolutely anatomically correct and I don’t think that’s necessary. Ott’s pieces capture the essence of the environment.”

He also loves the heft and weight of Jones’s bronzes and the way they convey emotion as well as what was happening in the scene.

“The bronzes also develop a beautiful patina that makes them more attractive over time,” Malone adds. “Also, he’s very approachable and that comes through in his art.”

Malone sees a forcefulness and honesty in Jones’s work.

“For example, the brown trout, people know they’re carnivores,” he says. “And the brown trout feeds on minnows. That’s the way nature is. Ott presents the animals as they are in nature. That’s so different than simply a model of a trout. To me, a brown trout in a stream is a predator. Presenting it in that way is very different than creating something static. Often his art conveys action and he’s very thoughtful in the way he presents so much action.”

One technique Jones employs is to not fill in the details of his pieces with every scale on the fish or every hair on a bison. He uses texture to infer the sleekness of speed or the rough sturdiness of a huge animal.

“The texture also gives it movement,” Jones says. “Less is so much more. I want the viewer’s eye to flow over the piece. And the ultimate signature of the work is my fingerprints, which are present in every piece. You want artwork to be art, to be unique.”

He also does commissions and recently made a piece for Queen Elizabeth of England called Birth of the Labrador.

“Back in the 1600s, the Royal Kennels raised Labradors to use as fishing dogs,” Jones says. “I have a friend who buys all his Labs from the Royal Kennels and he wanted to present a gift to the Queen. It was accepted by her and I feel very honored to have done that.”

But for Farah Neishabouri, co-owner of the Rocky Mountain Rug Gallery and owner of Farah’s Home Furnishing, who decided to take Jones’s work on in her gallery, the most important factor is the connection she feels with the artist. Of course the work has to be outstanding, but she needs something a bit more.

“Behind any great work there should be a great personality,” Neishabouri says. “I found his work really fit into the gallery. There are many people who ask me to show their work, but for me I have to really connect with them.”

She’s been representing his sculptures for the last four years and is happy with the way he works with clients.

“Customers love his art,” she says. “They see the workmanship and there’s a great support of his work. He does an amazing job with details and he usually has a great story behind every piece.”

Those stories are present in all of his work. And, after 28 years of being a full time sculptor, Jones feels he is so much more confident with the way his pieces are formed.

“When I first started, I was all about the Realism,” he says. “But now I’m straddling the line between Realism and Impressionism. It’s nice to feel that I don’t need all those details. The sculpture ends up looking like a sculpture, like art.” 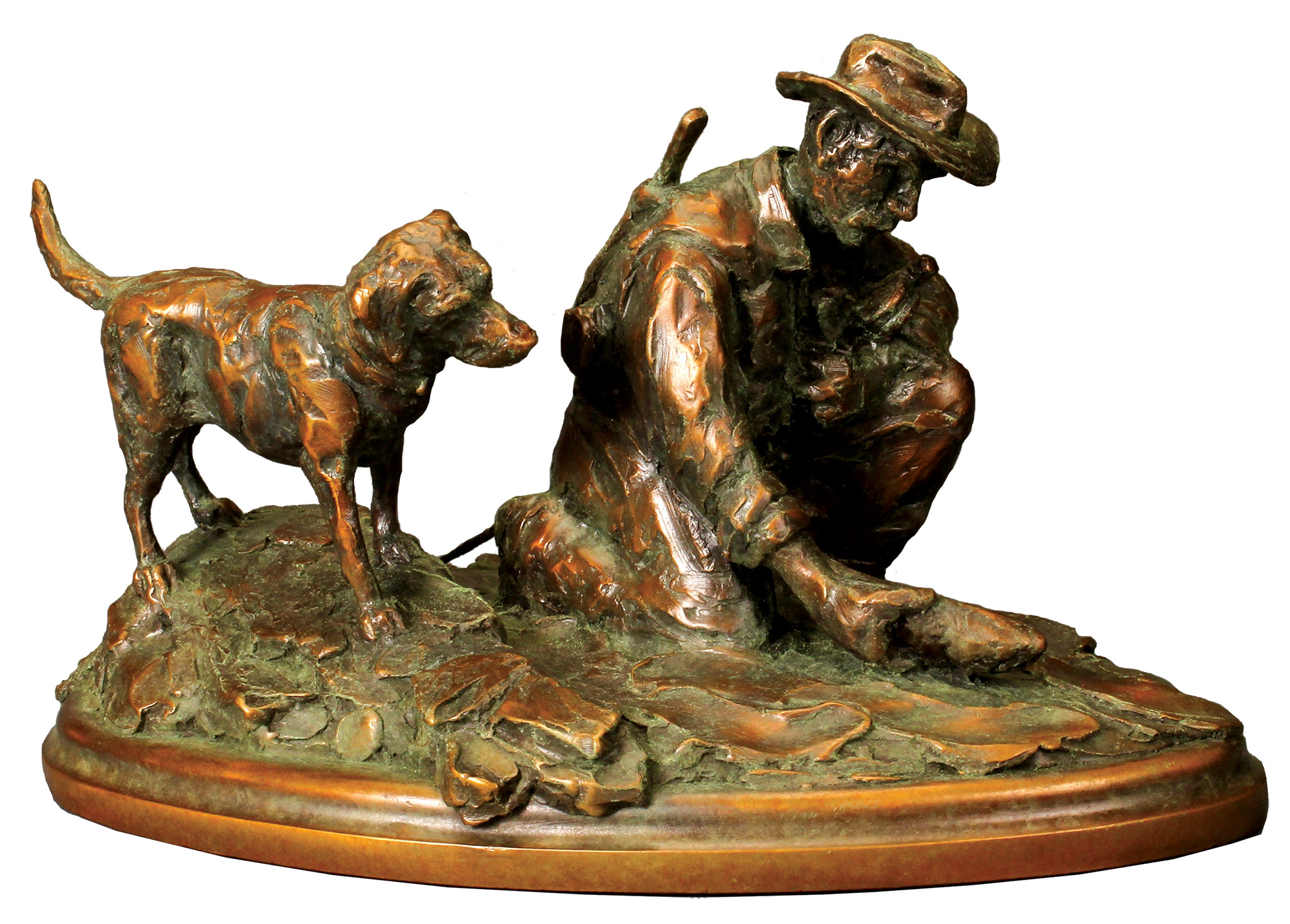 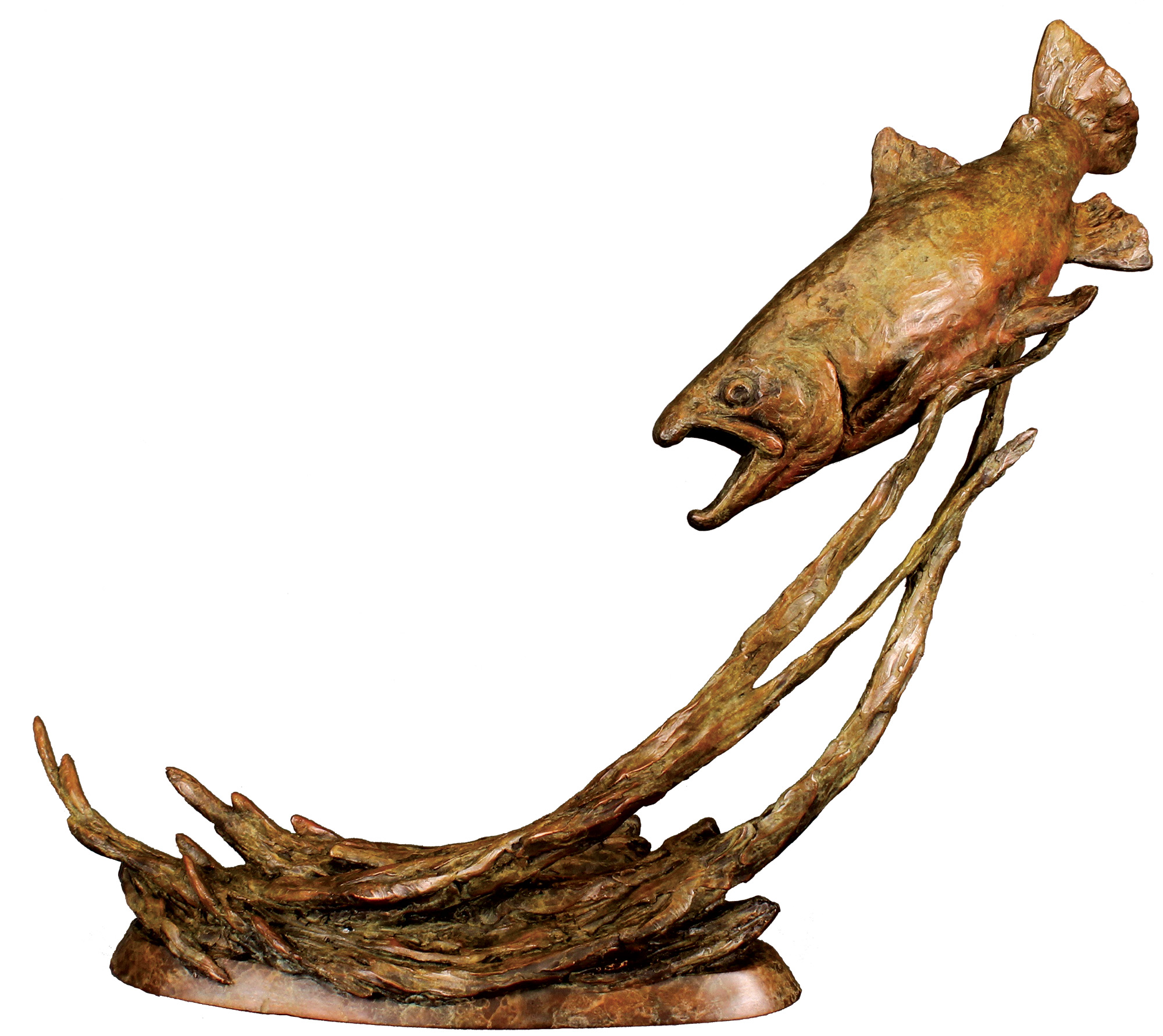 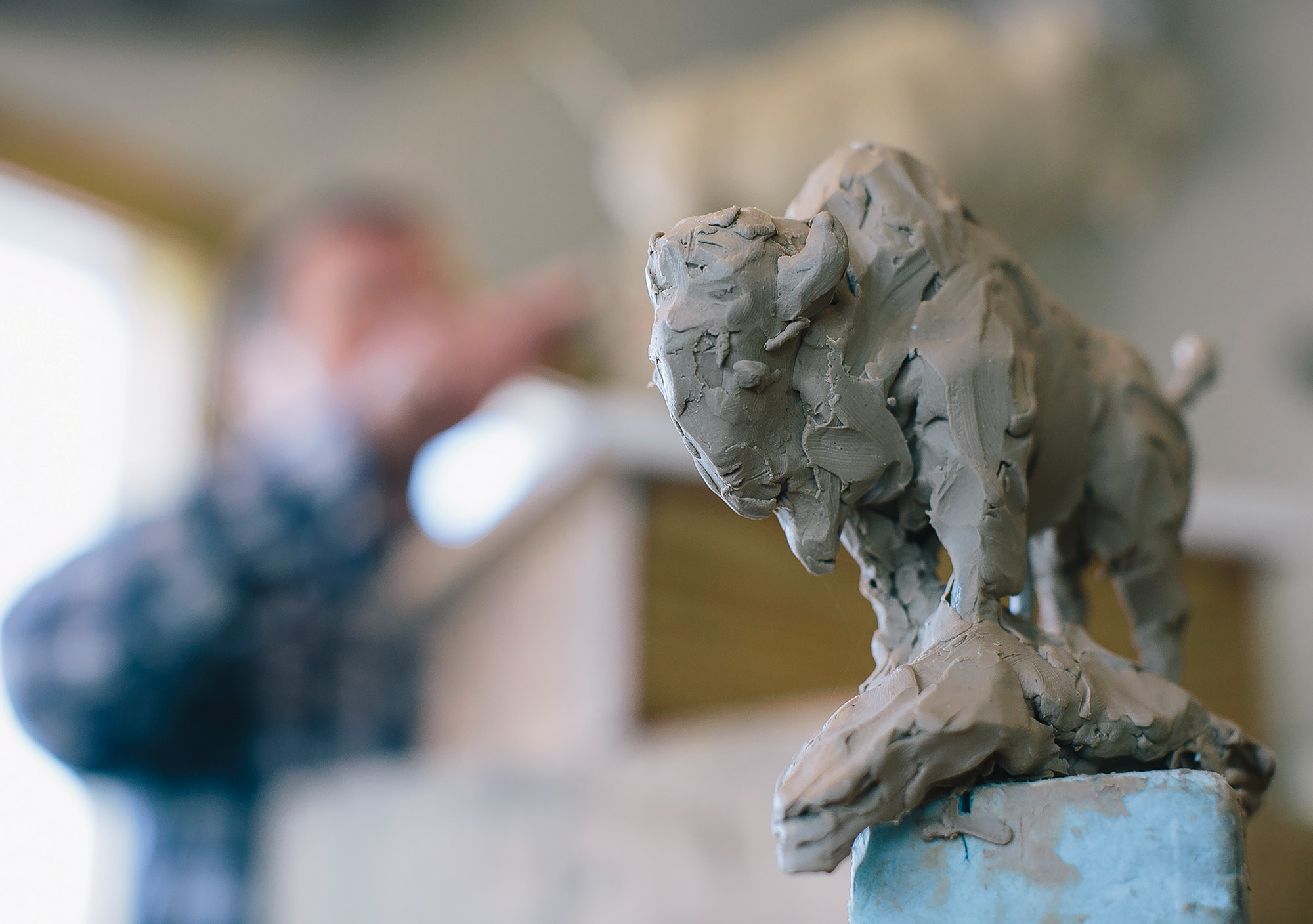 Bozeman sculptor Ott Jones follows a “maquette” as he works in his studio on a clay bison. Working professionally for the past 30 years, his sculptures have been acquired by the C.M. Russell Museum and the National Museum of Wildlife Art, and he has several monumental sculptures around the country. 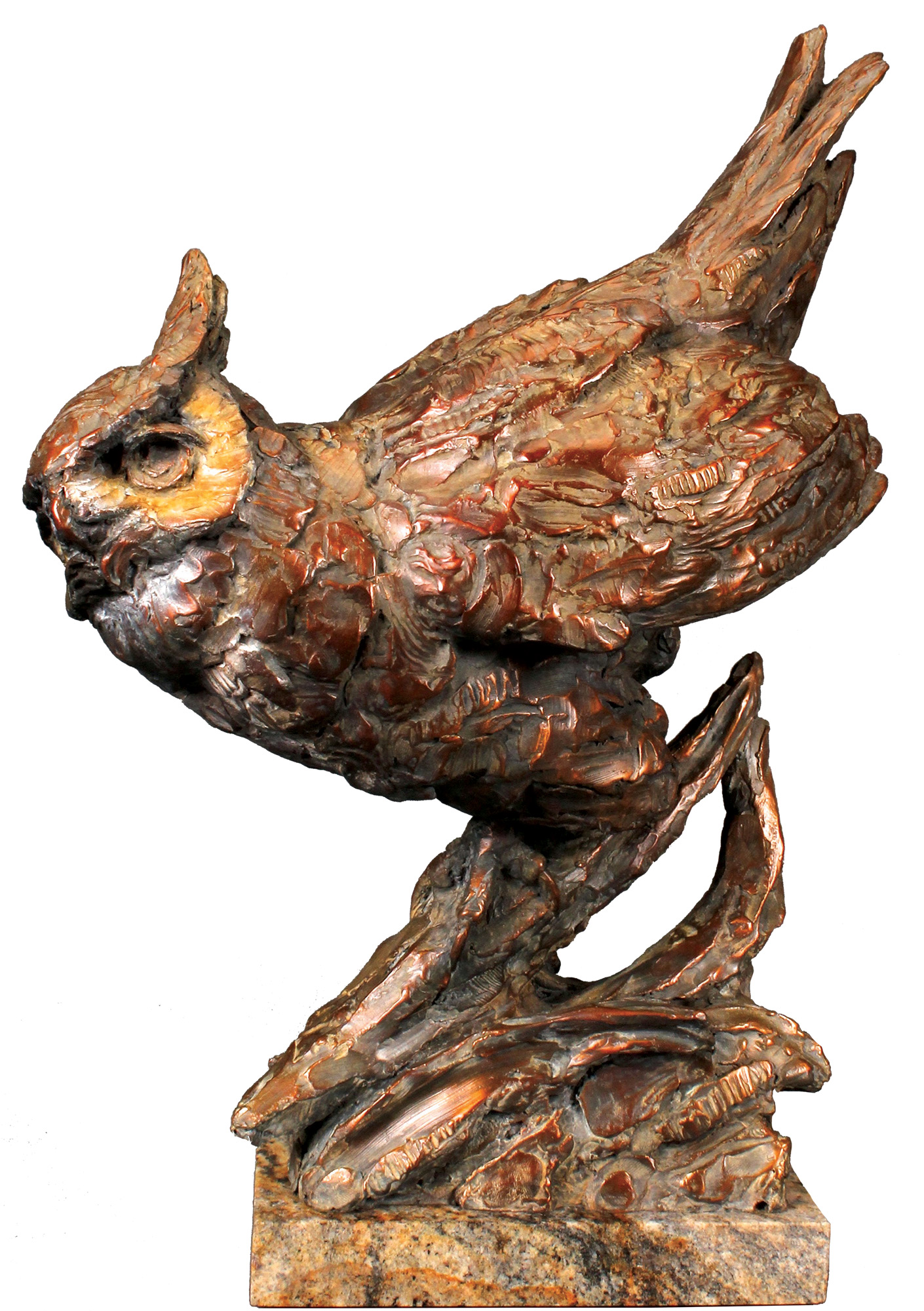 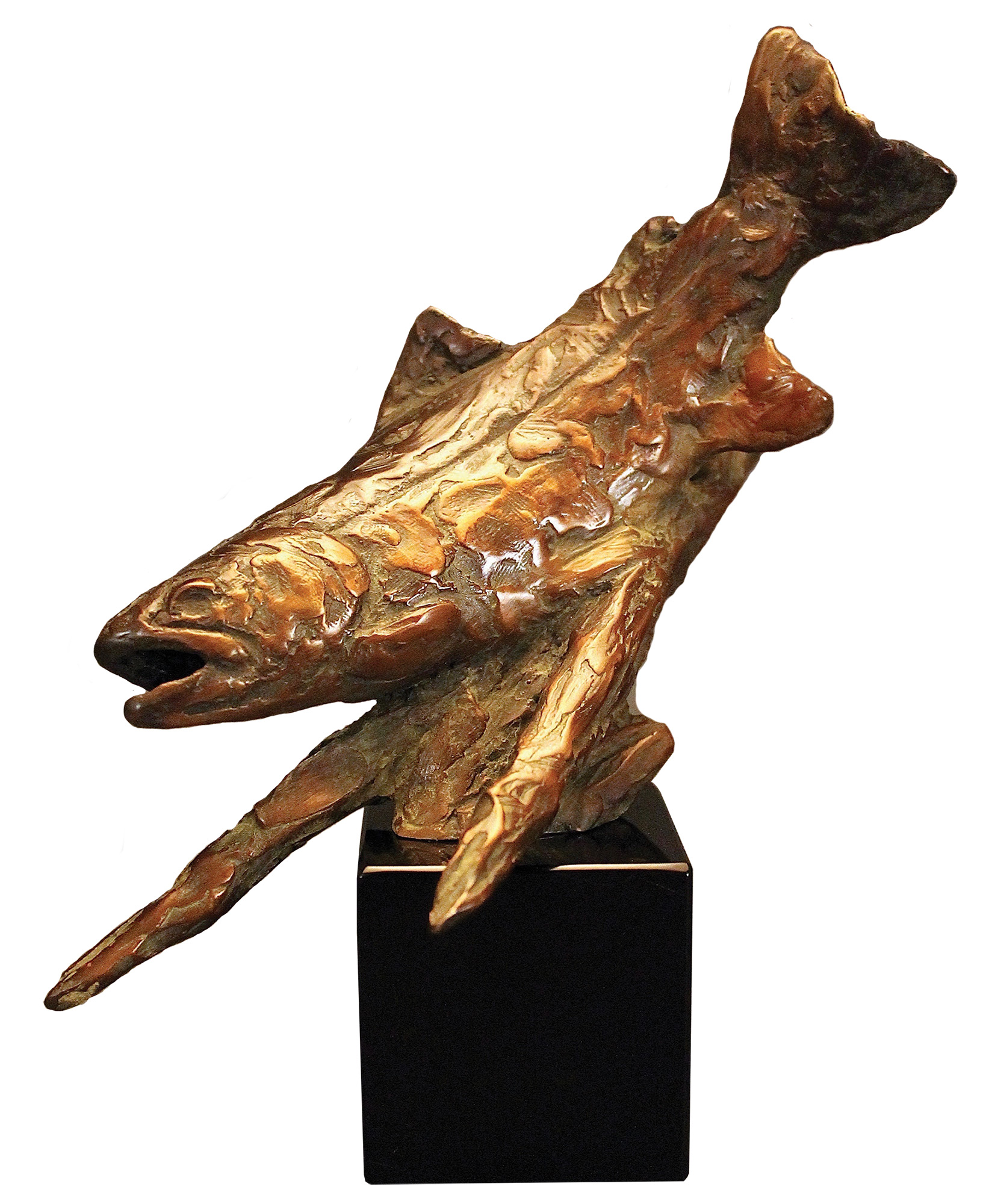 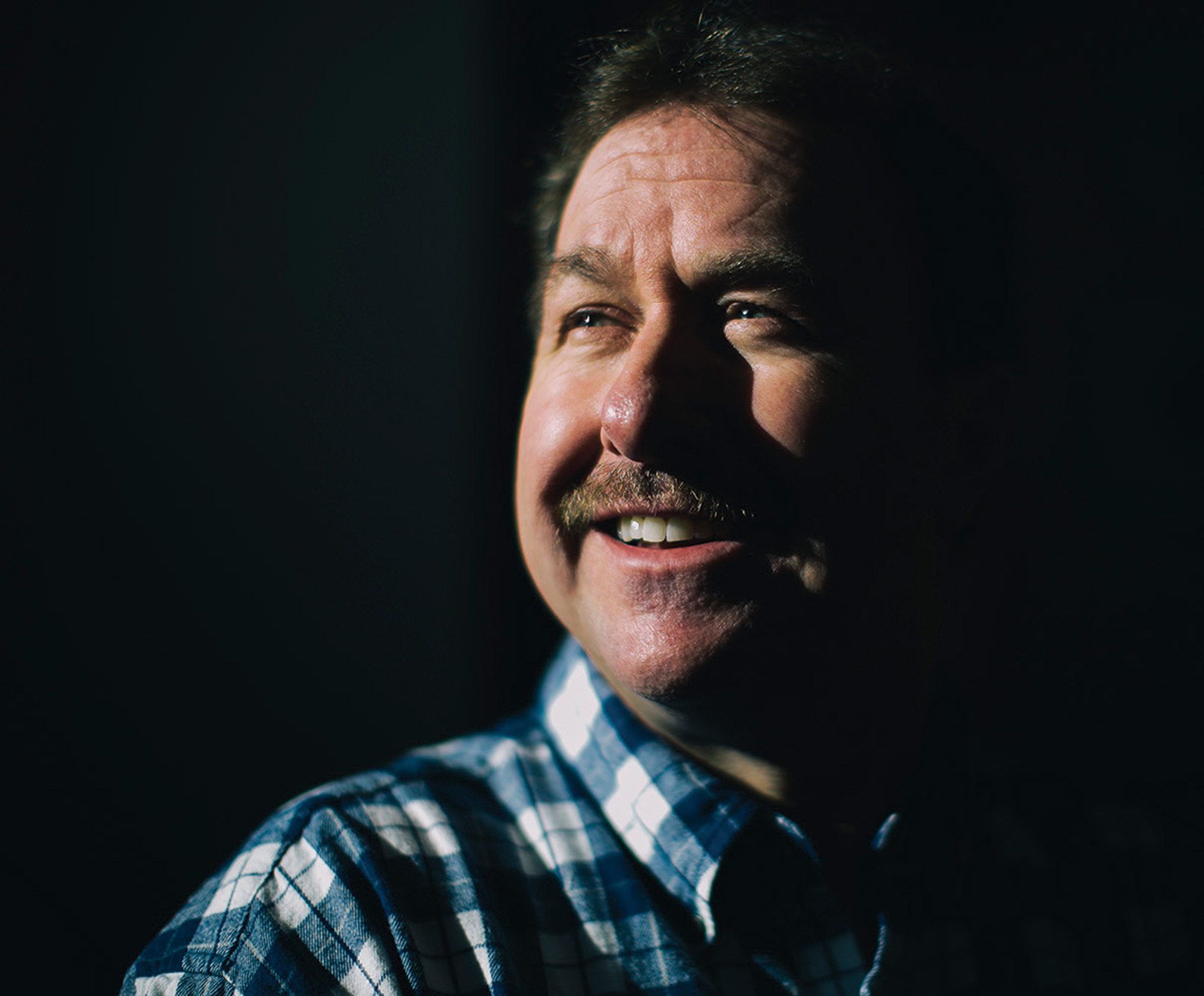 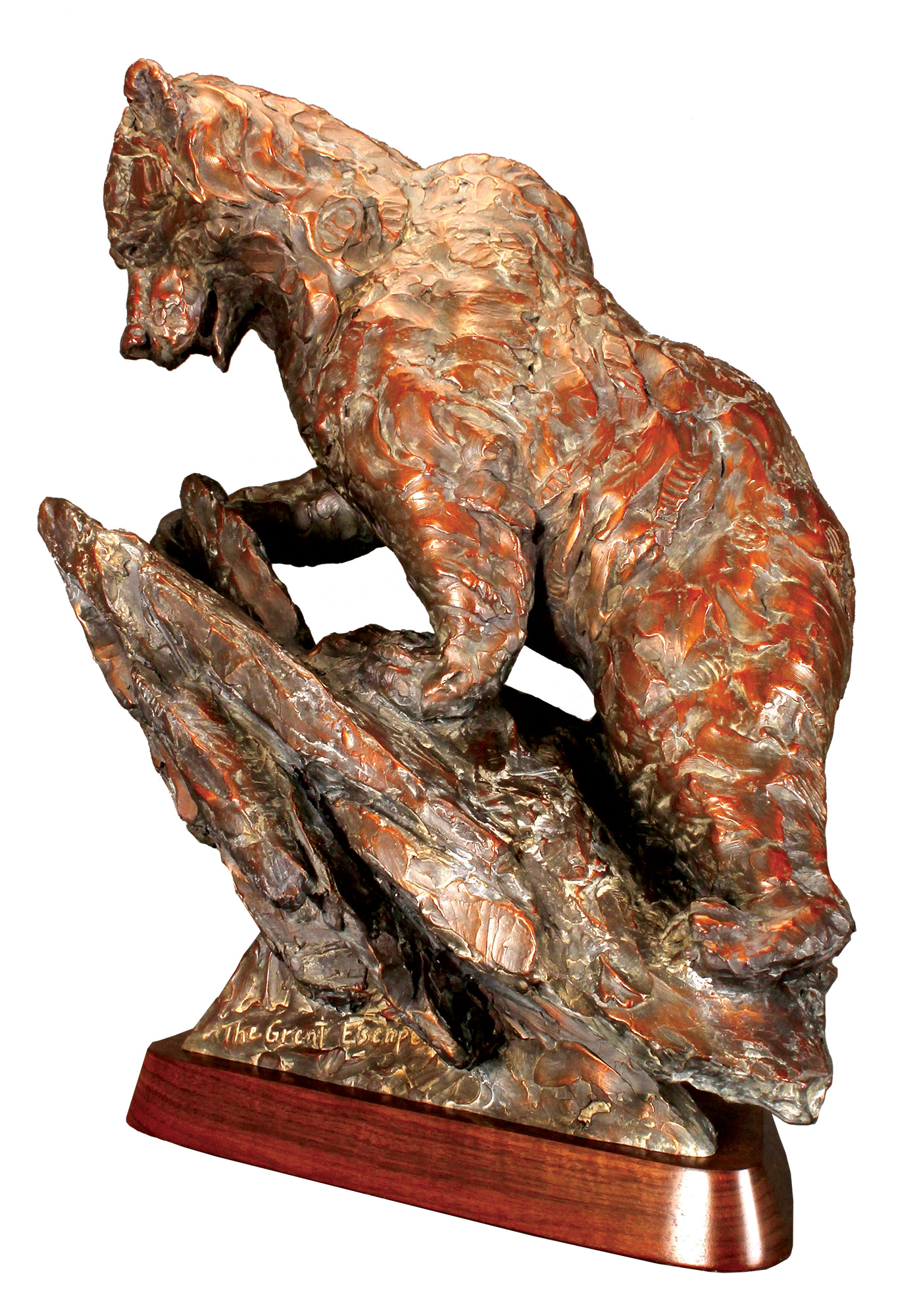 Bozeman sculptor Ott Jones works in his studio on a maquette of a brown trout. “I’m trying to tell a story,” the artist says.