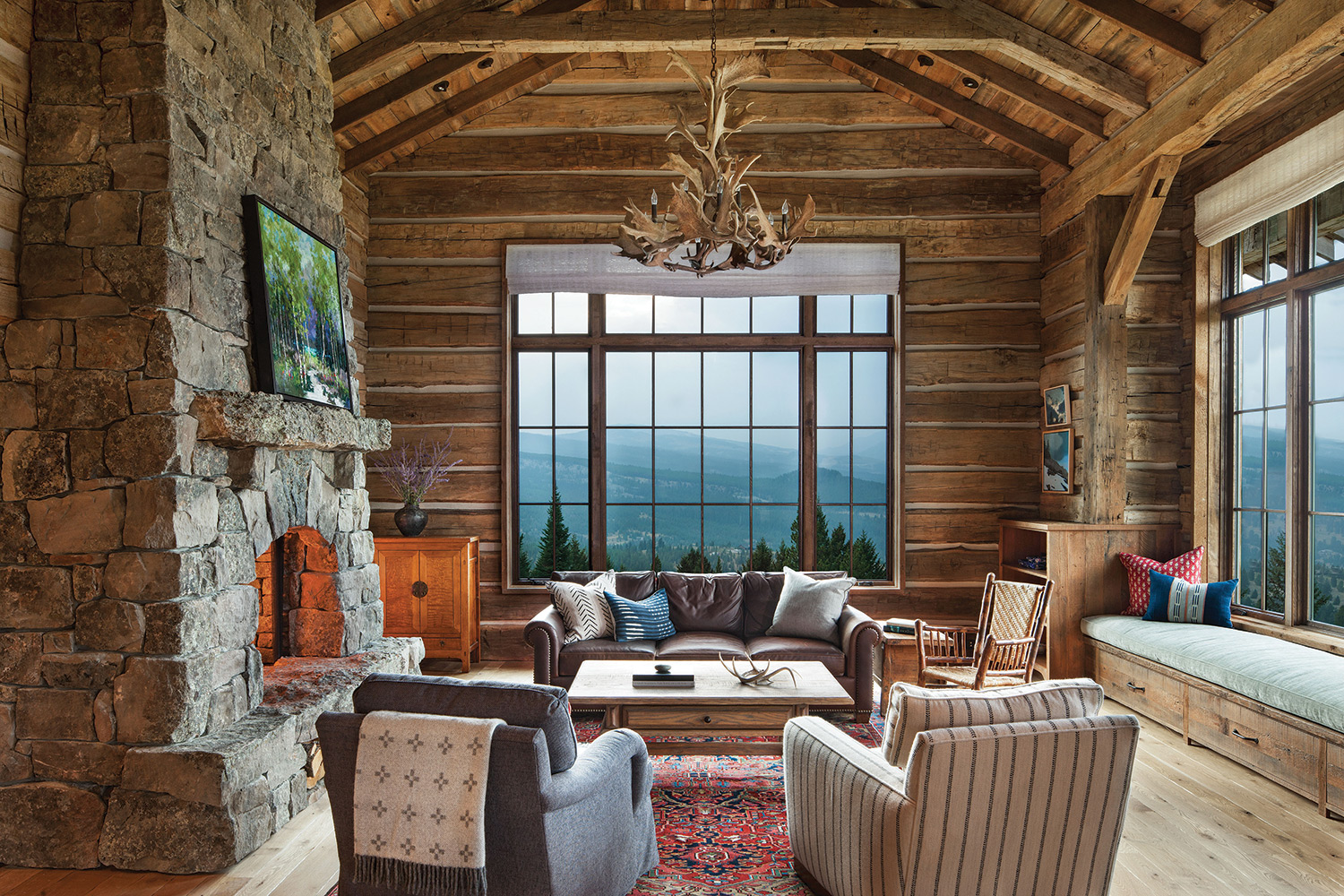 High vaulted ceilings and large windows open up, and brighten up, the living spaces, while the use of reclaimed timber and a stone hearth give a nod to a more rustic look.

HE IS OF NORWEGIAN DESCENT and has a passion for ships. She is a painter with a feel for color and the wonders wrought by natural light. Together, this East Coast-based couple realized their longtime dream of building a Montana home that would embody both his heritage and her aesthetic while containing their large family in a comfortable embrace. 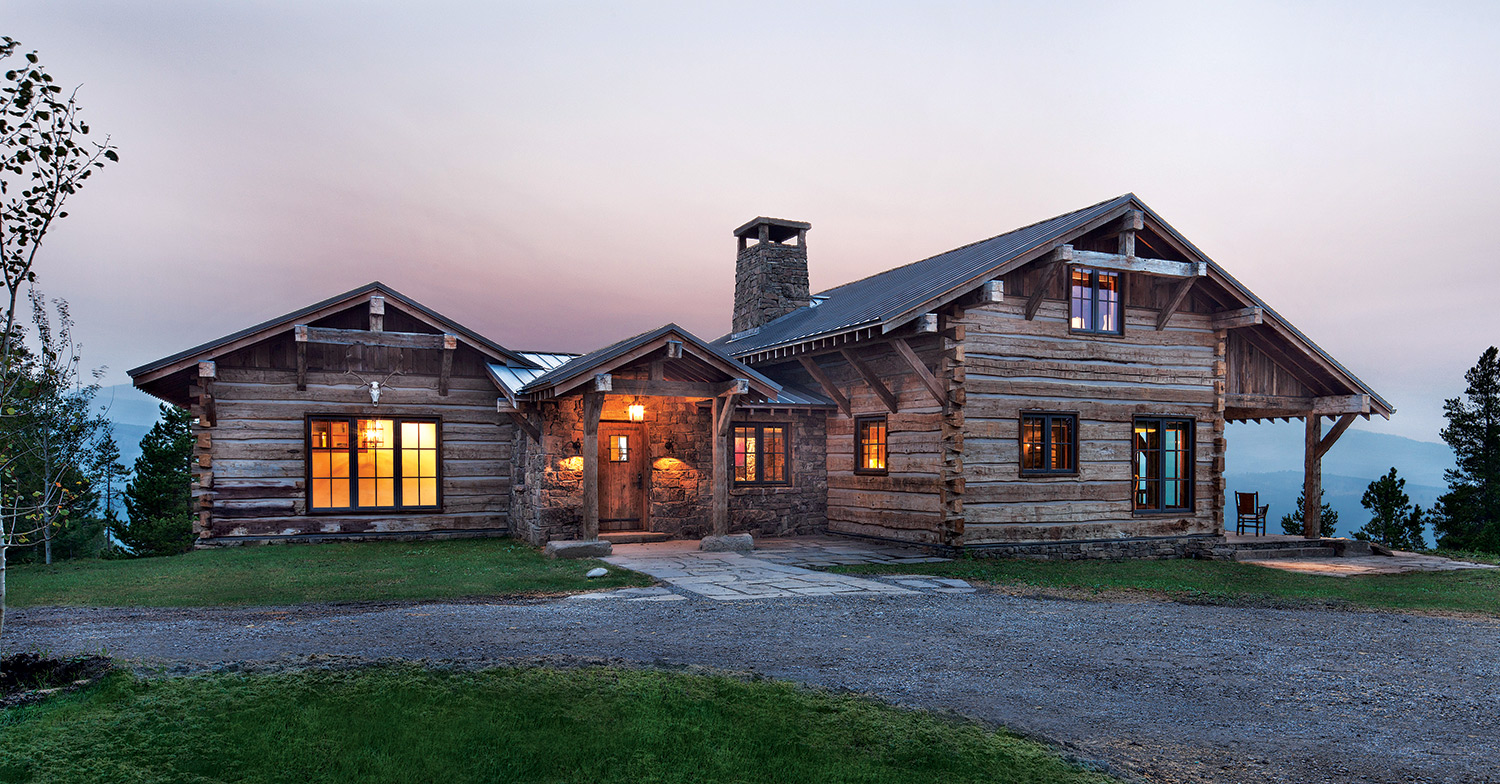 The stone entry is reminiscent of a traditional Norwegian countryside cottage, a reflection of the homeowner’s heritage.

Many talented builders, designers, and craftspeople helped to translate the pair’s vision into the trio of structures now situated in a high mountain meadow in Big Sky, Montana. Among them was Joe Roodell of Miller | Roodell Architects. “They were very thoughtful in their approach,” Roodell said of his clients, whose heartfelt involvement made the home a labor of love for all involved, “and this property was extremely special.” 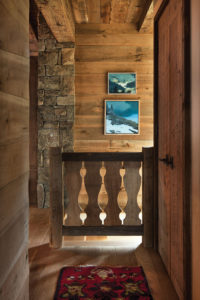 Subtle touches, such as the carved, decorative railings, give the home a Norwegian flair. 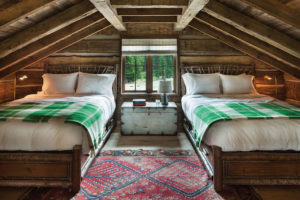 The cozy loft features a modest bedroom with a traditional flair.

The home’s sturdy stone entry evokes the deeply rooted soulfulness of a centuries-old cottage in the Norwegian countryside, and that’s precisely what birthed it. In the mountains of Norway stands a 1,000-year-old stone cottage that was inhabited by one of the clients’ grandfathers, who added two small wings off the original stone heart. One side was for sleeping, and the other was for living and entertaining. That dwelling’s modern-day descendant follows suit.

“The materials we used, the dovetailed corners, the long, broad overhangs of the building, and knee braces for shedding the snow, are all in keeping with what was used in the snow country of Norway,” explained Roodell. “We wanted to look back to a historical context and hold true to that.” Taking inspiration from images and books, including a Norwegian craftsman’s manual loaned to him by the clients, Roodell’s design incorporated subtle Scandinavian flourishes inside the house, too, like curvy, carved railings. “It was fun to think about this aesthetic,” he said, “knowing that we wanted to stay traditional but also incorporate some Norwegian flair.” 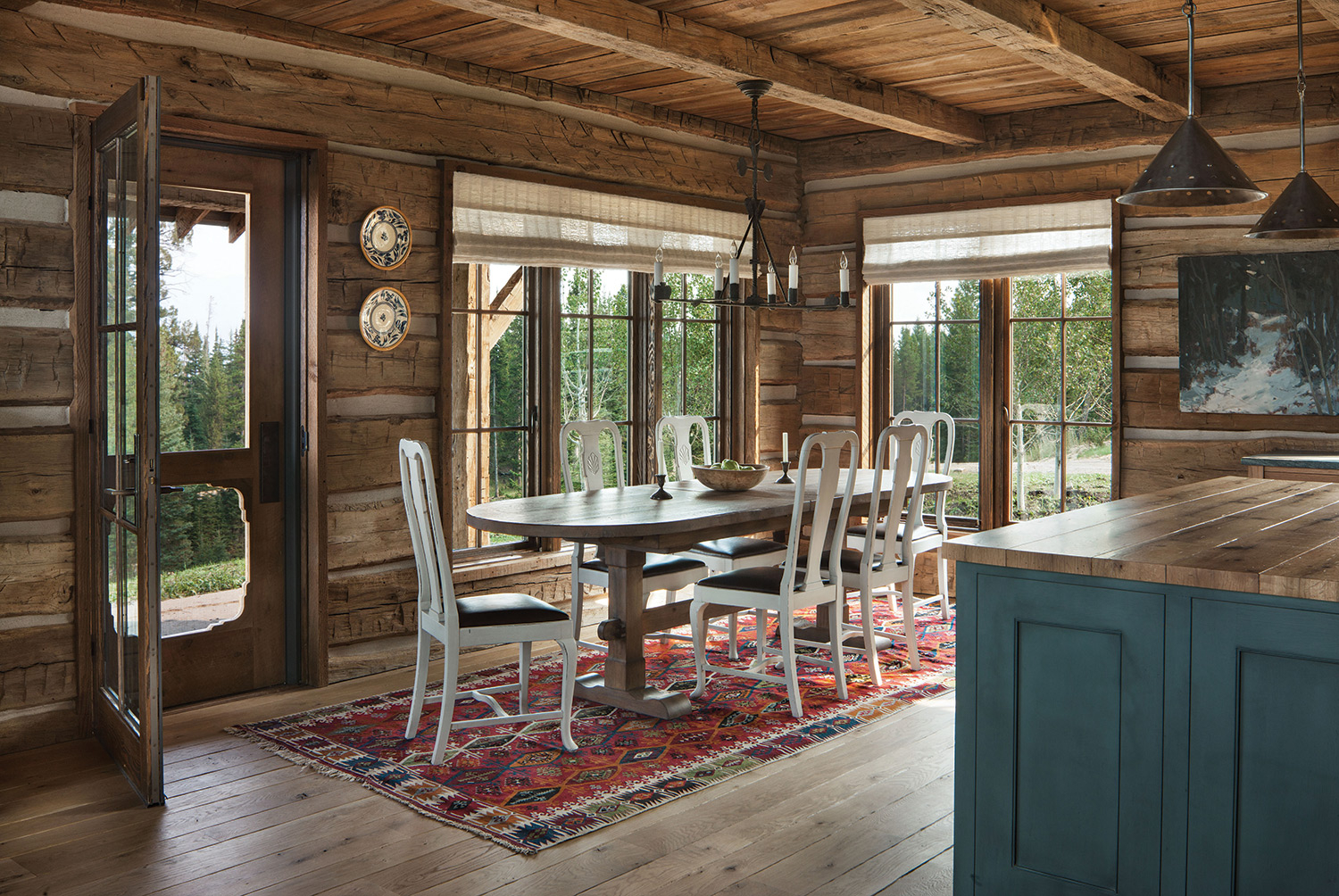 The home, modest in size, was designed as a retreat, a place where this family of five could sit around the dining table and foster a sense of togetherness.

Modestly sized with three bedrooms, the house fosters a sense of togetherness among the couple and their five children. Here, however, the coziness that characterizes Norwegian style doesn’t translate to dim, cluttered, and close. Instead, the feeling is fresh, open, and light. The abundance of windows — some nearly as big as the walls that contain them — allows for views of the Gallatin Range, the forest, and that singularly breathtaking and ever-changing marriage of bright blue sky and sunlight found nowhere else but Montana. Rather than asserting itself over the land, the house seems to humbly invite an ongoing experience of it. 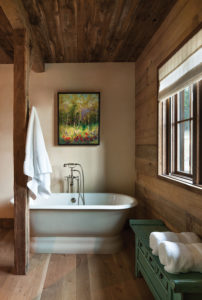 A free-standing tub is surrounded by the natural hues of wood, adding a soft touch to a relaxing space.

Yielding to the natural assets that made the building site so desirable, Roodell tucked the main house and its adjacent buildings into the treeline along the meadow’s edge, and took care to echo the ebbs and flows of the existing hillside. “To touch this landscape carefully, we wanted to downsize the forms,” he said, echoing his clients’ desire to create a collection of smaller structures that would, they hoped, be gentle to the environment. While its deep sense of harmony with the 160 acres of wild beauty that surround it is palpable, the home’s true genius may lie in how it reflects the internal landscapes of its inhabitants. 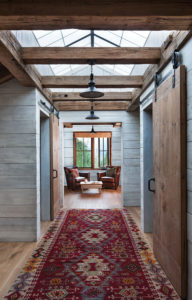 The vaulted ceiling, ribbed with beams, reminds the homeowner of a ship’s upside-down hull.

The living area, with its high, vaulted ceiling ribbed with beams of reclaimed timber, reminded the home’s ship-loving owner of being sheltered beneath a big, wooden, upside-down hull. This was a deliberate nod to his passion, and it’s among his favorite facets of the house. “I realized,” he said, “that it’s possible to experience the same pride of ownership you have with a boat, but with a house — that sense of appreciating the level of craftsmanship. The builders on this project were really special.”

His wife appreciates the long writing table placed before three tall windows just beyond the home’s entry. It’s the perfect, sunlit spot for making watercolor paintings and other creations. “I love sitting there and working on my art and looking out at the view,” she said. “It’s very nice. You’re close to the living room, so you can talk to people there, but it’s separate enough that you can make a mess without getting in anyone’s way.”

The painter’s sensibility she exercises in her favorite nook is also expressed throughout the interior of the main house, as well as in the neighboring guest barn and the artist’s studio where she delves more deeply into her work. She conceived of the home’s interior hues with great care, and brought designers pieces of paper stroked with shades of her own paints to illustrate her hopes. The result? Natural and nuanced washes of color sing alongside the Montana moss rock, reclaimed white oak, and weathered barn board with which they coexist. More than just tint for indoor walls, however, the quietly radiant shades also relate to what’s happening beyond the many windows. “I wanted colors in balance with the environment outside,” she said. 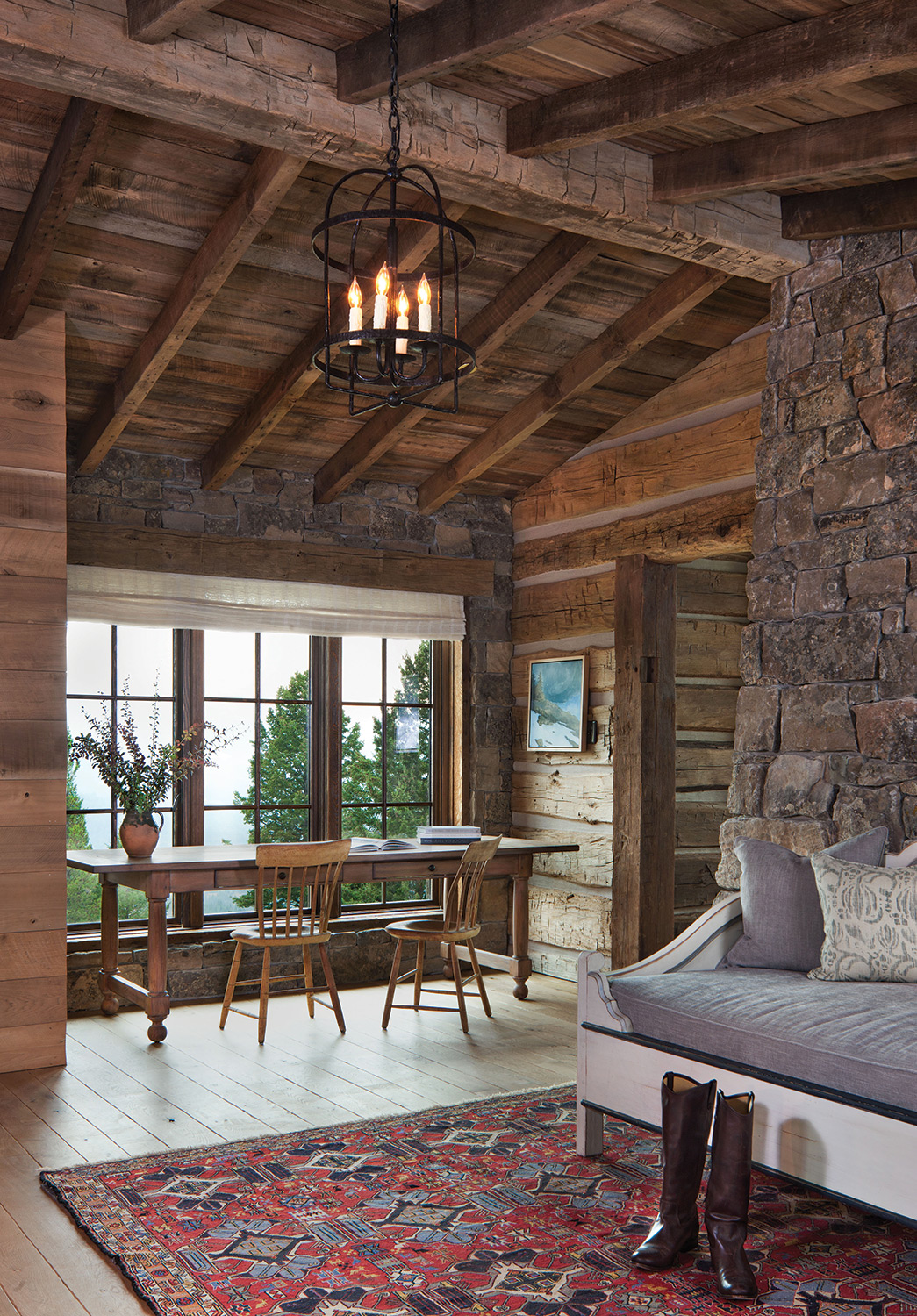 A writing table with a view is where the homeowner’s wife likes to work on her art creations. 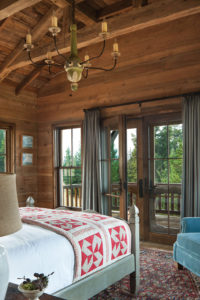 The master suite features a deck overlooking the sweeping views of alpine meadows. 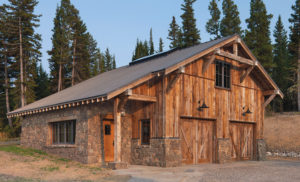 The detached garage holds onto the same design style as the main home, with stone embellishing reclaimed lumber.

Equally considerate of the property’s natural beauty was Phoebe McEldowney of Haven Interior Design, who partnered with colleague Debra Shull to furnish and decorate the home. “The sweeping view of the alpine meadows from the living room is awe inspiring, and we didn’t want the interior furnishings to interfere in any way,” said McEldowney. Choosing handcrafted and down-to-earth pieces, the designers reflected the beautifully aged, storied, and rich character of the vintage finds to which the owners have long been drawn. “They wanted a home that was comfortable and not overly decorated,” McEldowney explained. “We did this by blending custom-built pieces with primitive antiques. The antiques add a lovely sense of charm and give the home a European flair, while the custom pieces and upholstery keep the home grounded and comfortable.”

Indeed, comfort imbues every corner of this Western retreat. In the guest quarters, rooms with bunk beds open to a hallway flooded with sunshine streaming through a peaked skylight that crowns the entire top floor. A milky bathtub is the inviting centerpiece of a serene bathroom where an abundance of old wood seems to exude warmth. Nestled within a cozy upstairs loft reminiscent of a secret arboreal hideaway, a pair of plush beds invite deep dreams of the sort houses like this are made of. 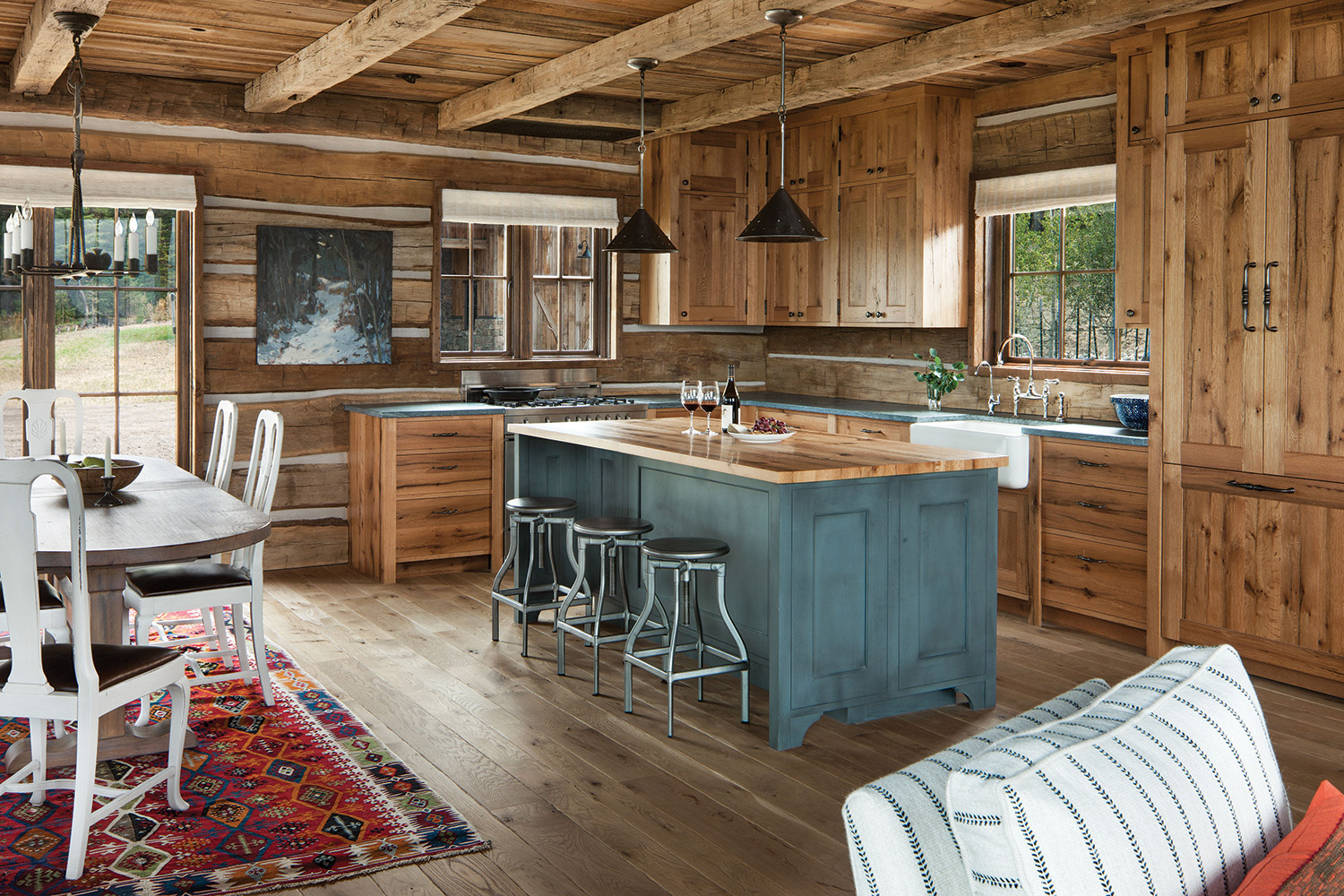