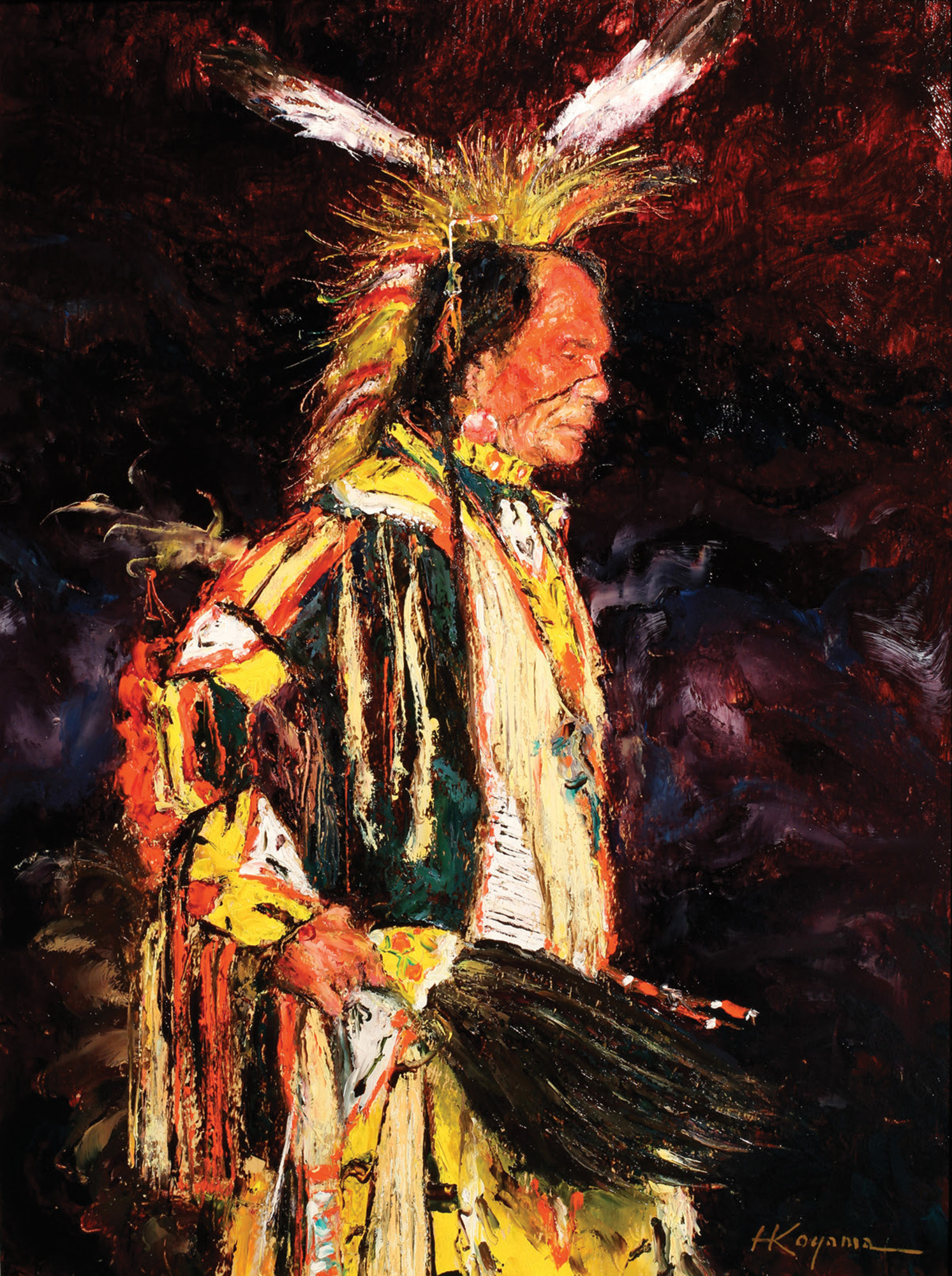 24 Nov Artist of the West: Art from the Heart

Eight colors plus one palette knife equal an infinite array of possibilities for Harry Koyama. By stripping down complicated elements he allows his subjects to reveal themselves in his paintings.

“I use a single palette knife on each piece,” Koyama says. “The larger the surface, the larger the knife. It helps me to get the impressionistic look I want. I try for simplicity without the detail.”

By eschewing the details, Koyama allows the viewer to fill in the missing parts with their imagination. He provides the prompt. We provide the subtext.

“It’s something most young artists have a difficult time doing,” he says. “Rather than portray an exact representation, it takes patience and fortitude to achieve — it takes maturity to do that. I believe the most successful paintings are done with least number of strokes.”

Which is not to say that Koyama’s paintings lack specifics. On the contrary. He bases his paintings on photographs he takes, mostly in Yellowstone National Park.

“Once I get the shot, I can spend as much time as I want on the painting,” he says, comparing studio work to plein air painting. “When I take pictures, I can recall the nuances of the day — the scent of the pine needles and heat in the air.”
His studio, located in the rear of his Billings gallery, is clean but not sparse.

“I work fast,” he says. “When I’m in the middle of a painting, everything is geared toward efficiency.”

Birch plywood, Koyama’s choice for a painting surface, sits on two of his easels, both in mid-process. Koyama sketches with his palette knife, getting a detailed outline of his subject to work from. In this case both paintings depict grizzlies. One is a single portrait and the other is a mother with her cubs. Even with only a single color on the board, emotions spill from the piece. The mother watches her cubs — somehow seeing both of them with a single glance — and the cubs look out to the viewer. A portrait in parenting, love and independence.

“Harry Koyama is a very wonderful human being with a beautiful soul and one catches a feeling for that in his art, quite directly in his portraits of Native American Crow people,” Matthews says. “But one also senses his love of wildlife and the landscape, which he evokes through his abstract backgrounds.”

Not easy for someone whose Japanese-American family was interred during WWII.

“His incredibly sunny personality and love of the people and the place that is Montana, shines through in his art,” Matthews says. “The best art comes from the heart and Harry is an artist whose work reflects his wonderfully big heart.”

Koyama reaches for the alizarin crimson, one of the eight colors he uses. The tube of paint, inserted into a caulking gun, hangs along with the seven other colors around the edge of a 5-gallon bucket at his side. With two clicks of the gun, he replenishes his paper palette. The rhythmic metallic ring of his knife against the hardwood as he works on his trademark background provides the backdrop for Koyama’s energetic style. The vivid red of Alizarin Crimson allows the main subject to jump from the surface.

“The red conveys a lot of emotions,” he says, wiping his knife with paper towel he pulls from a dispenser. “It could denote something revealed in our dreams, or a memory of something we’ve seen.”

Another click from the caulk gun as he mixes ultra marine into the red to darken it. His knife scrapes along the surface, and then quiets into a soothing motion.

“The knife is a way to get texture but it’s also a way to smooth on layers,” he says, moving fluidly from one color to the next, pausing only to clean the knife or reach for a fresh towel. “I let the paint do what it was intended to do.”

Above his board is a copy of a smaller version of the grizzly he’s working on.

“First I do a smaller painting before I do a larger one,” he says. “Right now I’m figuring out the background, which is always a little bit different. But I usually know right away if a subject is going to work; it’s a matter of getting the details.”

Earlier this year, one of his bison paintings was chosen for the U.S. Embassy in Beijing by former Montana Senator Max Baucus when he was appointed as ambassador to China.

Baucus was familiar with Koyama’s work through the Rocky Mountain College fundraiser where Baucus purchased one of his paintings a few years ago.

“It’s an honor,” Koyama says. “I’m very proud to have been asked to send a painting to the embassy in China.”

Deborah Kline Sonderman, director of the non-profit Carbon County Arts Guild and Depot Gallery in Red Lodge, has shown Koyama’s work for more than ten years. He was their signature artist in 2009 for the Art in the Beartooths fundraiser that keeps their art programs going.

Koyama’s career started out in sculpture, but because of the high cost and huge amount of time it takes to bring a bronze to realization, he decided to concentrate on oil painting, although he still works on bronzes.

“When he had his first one-person in 06, he brought some of those of sculptures,” Sonderman says. “I was bowled over.”

Because Koyama grew up in Hardin, his Crow friends feel very comfortable with his depicting them for portraits. Their comfort and confidence in him show through in his work.

“The first time I saw his work was in Hardin,” Sonderman says. “I loved it from the very beginning. I bought myself a tiny landscape. I had no idea we would show his work or that he would become a very important artist.”

In Sonderman’s estimation, Koyama is the best knife painter she’s come across.

“The texture and variation of color he gets is astounding to me,” she says. “The depth he’s developed is superb. It’s exciting to watch his work over the years. He keeps getting into larger and larger scales. He’s doing huge paintings — even a full size bison painting.”

But it’s Koyama’s bear paintings that touch Sonderman in a way that other painters don’t.

“He has this wonderful quality of movement, depth and emotion,” she says. “It grabs you right away. You feel like you’re out in the field watching those bears. He makes you feel the enormousness of them as well as the beauty and tenderness of them.”

In that way, Koyama brings his portraiture style to his wildlife work.

Looking back over the years since Sonderman first came across Koyama’s work in Hardin, she says his style has become more refined.

“There is no reservation to his work,” she says. “He’s not afraid of color and his paintings have become more powerful. Even from four years ago, I see a difference in the strength of his work. It’s uninhibited. There’s more abandonment and he’s experimenting more with abstract work. It’s been wonderful to watch him grow. Every time I see him there’s never anything static. Each new piece wows me.” 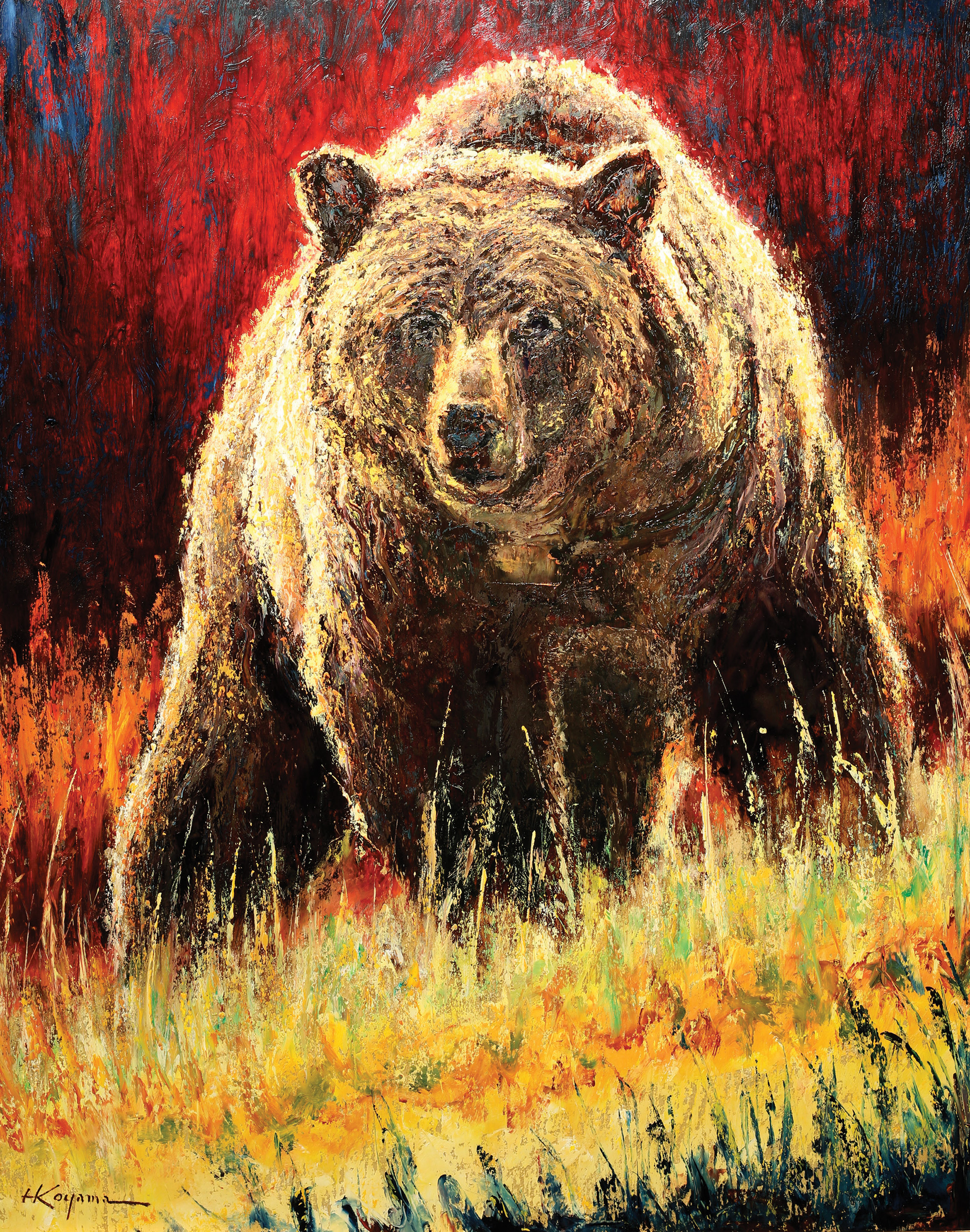 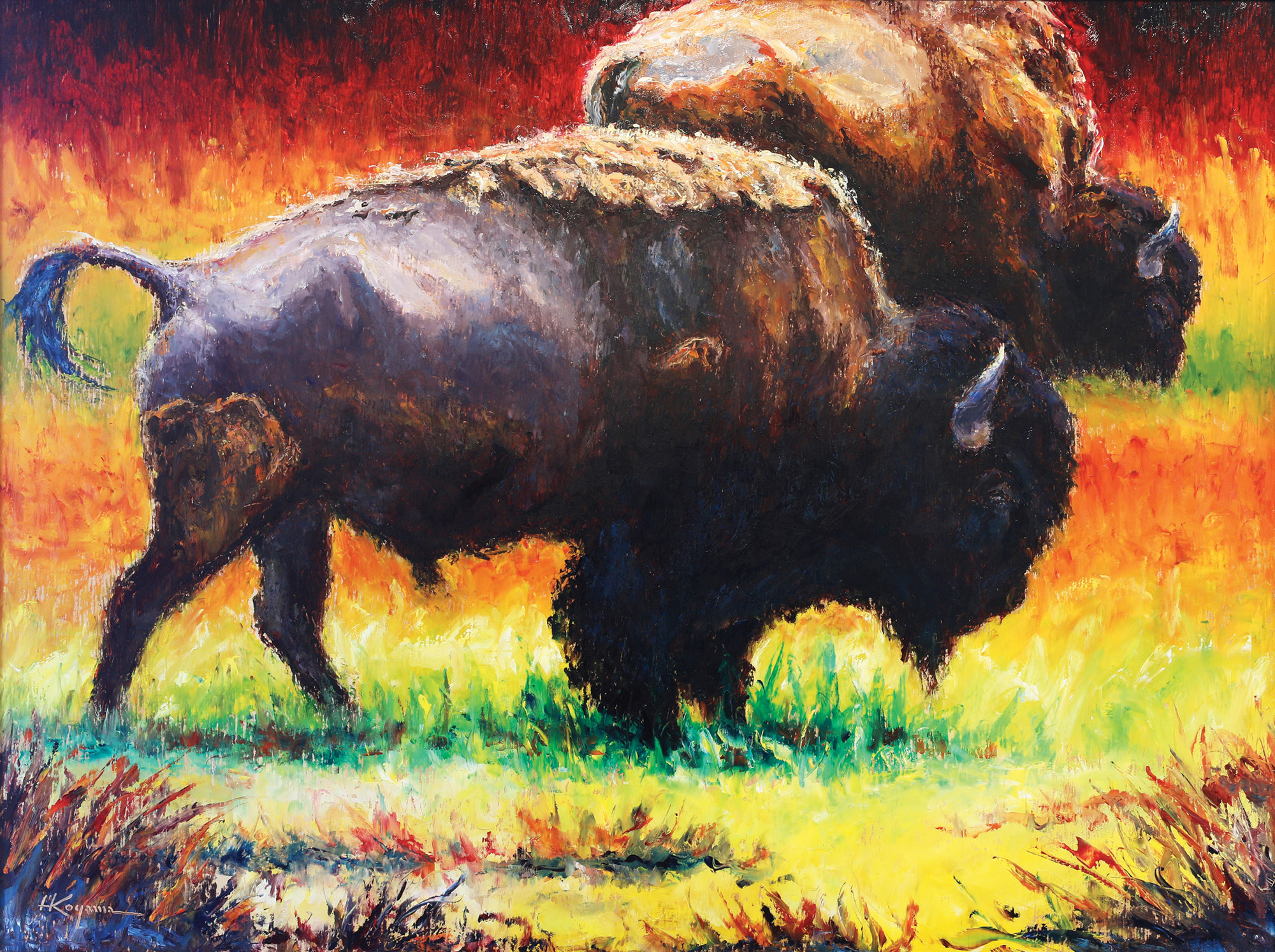 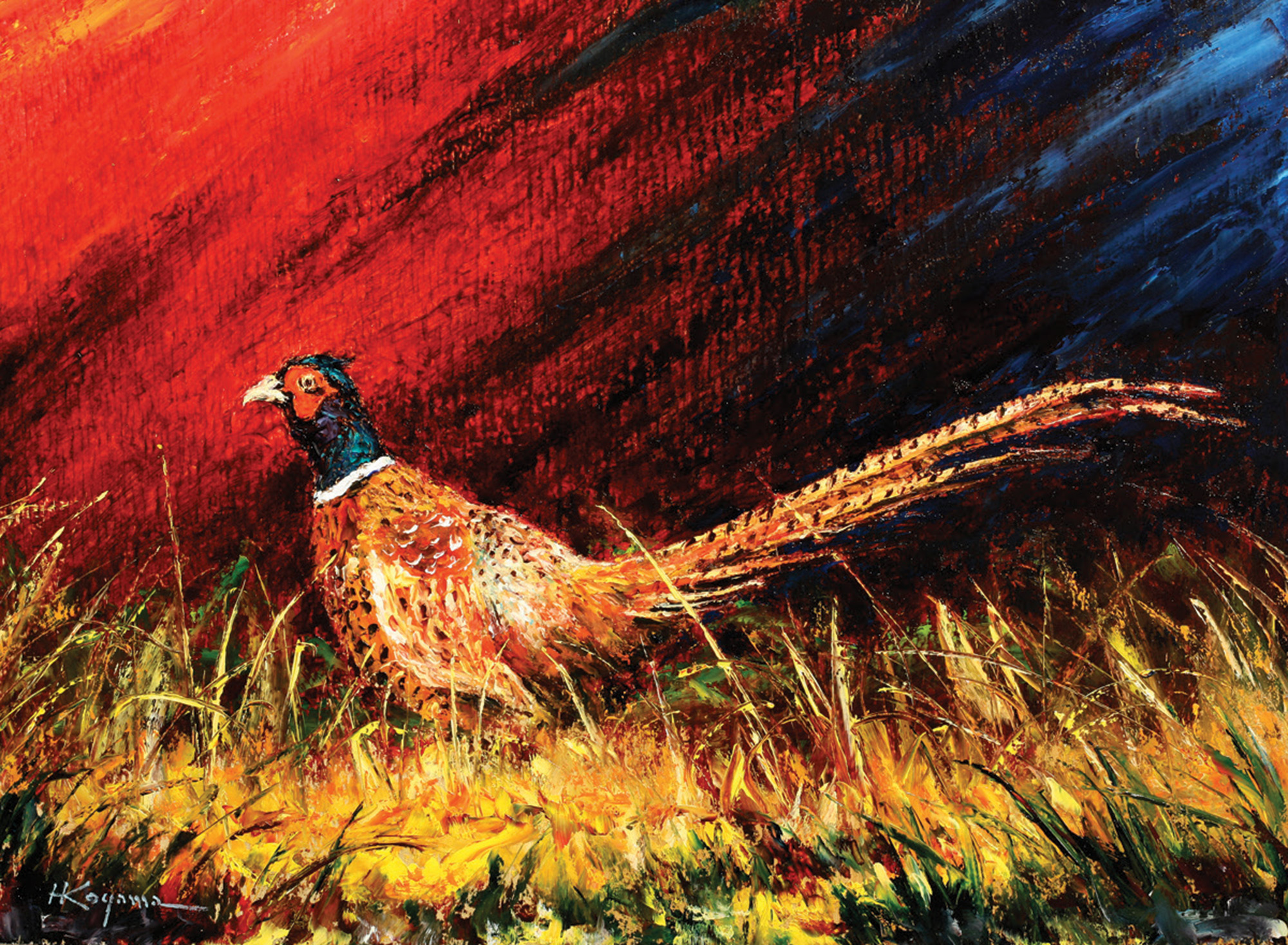 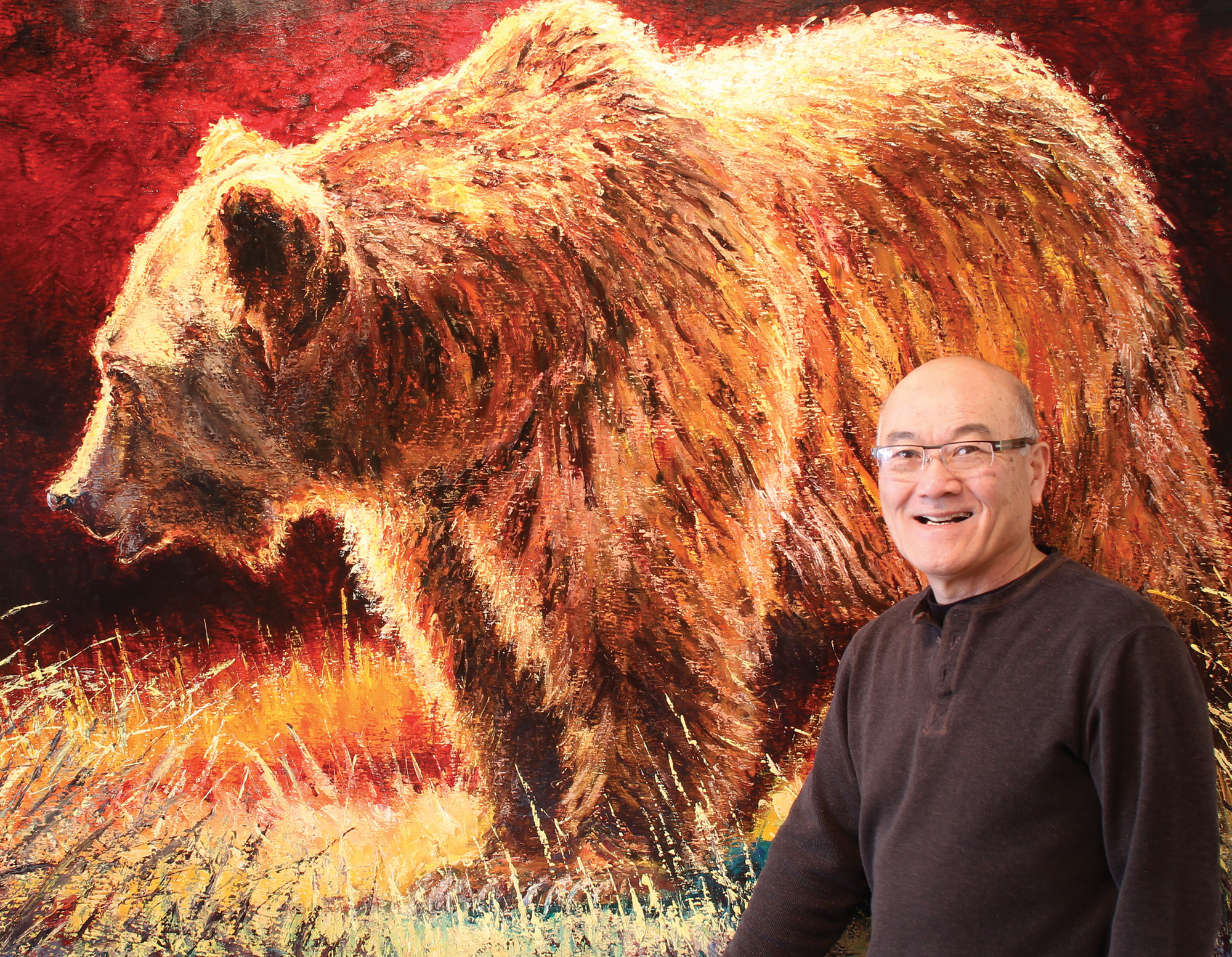 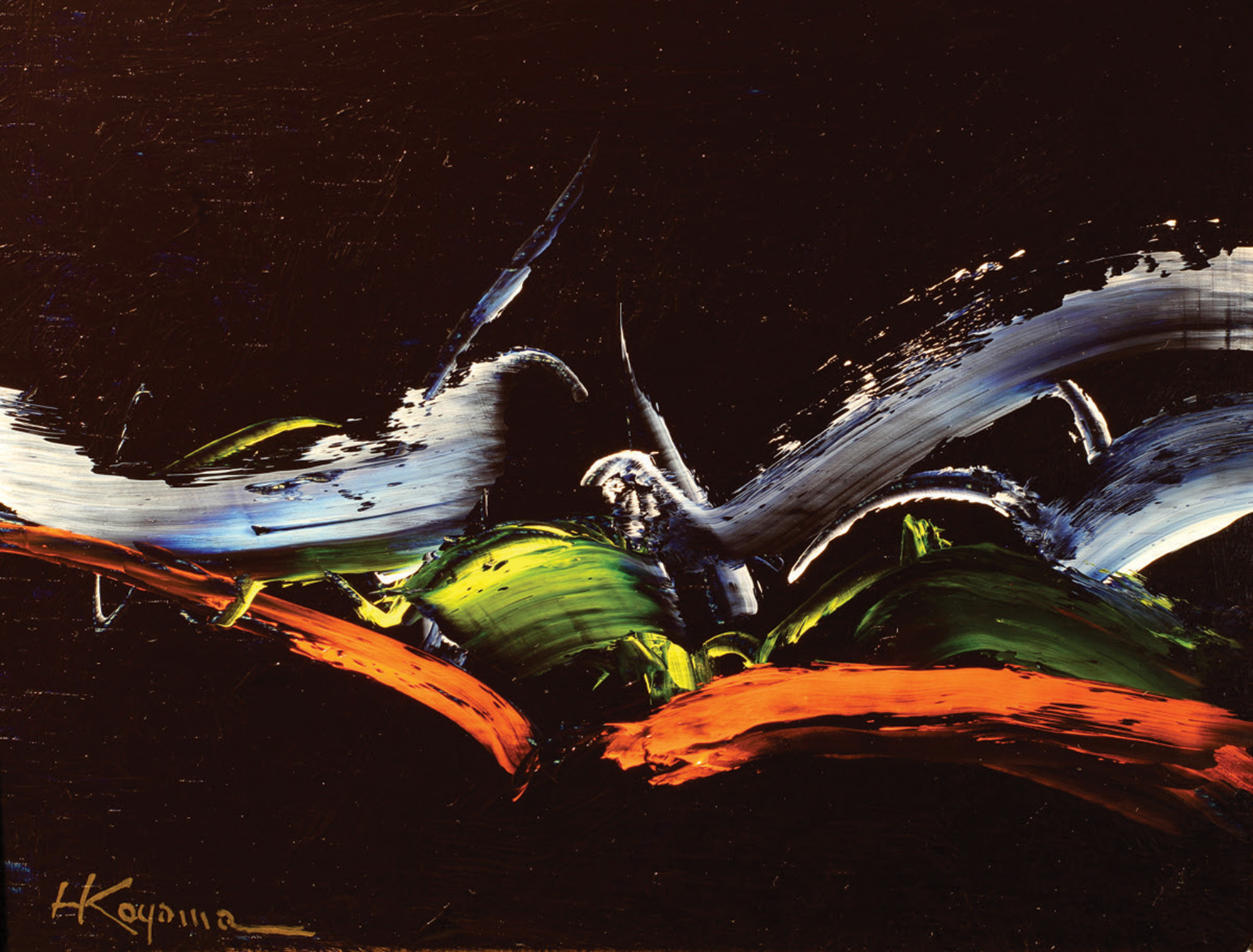 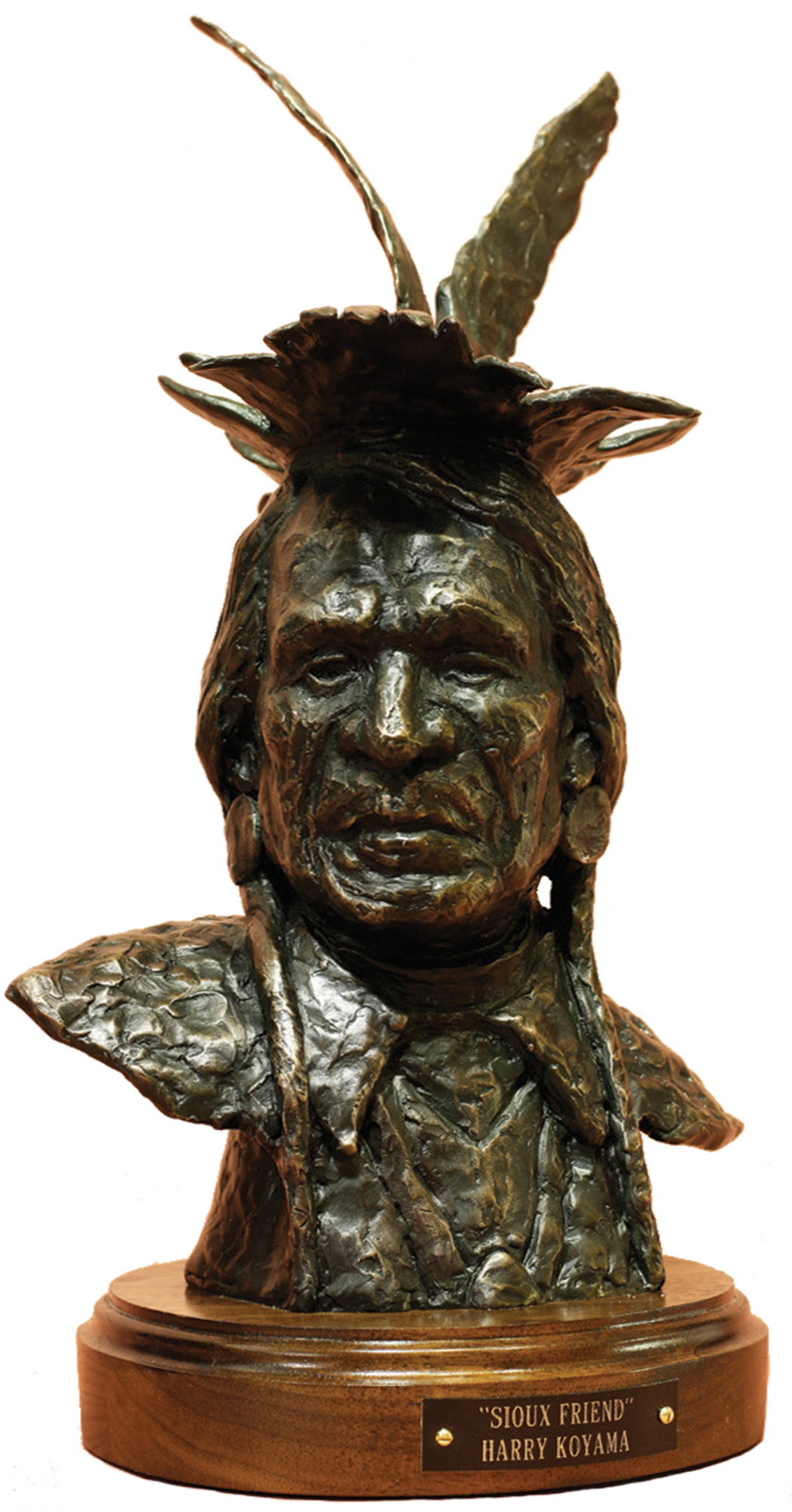