28 Nov Another Kind of Nightlife

AFTER THE TRAM, GONDOLA, and 11 lifts at the 2,500-acre Jackson Hole Mountain Resort (JHMR) stop turning for the day, after the skiers and vast majority of resort employees have wandered home or found their way to a local watering hole, for a handful of workers — the night groomers — the day is just starting.

It’s 4:30 p.m. when I arrive at the Mountain Operations Building at JHMR. I wander through the maze-like facility until I reach the groomers’ headquarters. The room is littered with heavy metal file cabinets and lockers, and clipboards hang from the walls beside photos of heavy machinery and motorcycles. Inside, I find 10 men gathered around a table. Wearing flannel, hoodies, t-shirts, ball caps, and beanies, they are chowing down on a late-afternoon meal, one man tearing into a rotisserie chicken, others digging into leftovers from their Tupperware containers. As they eat, they talk about the evening ahead, discussing preparations for the racecourse, considering which slopes need a winch cat. With the resort’s winter season drawing to a close, one employee mentions something about summer work driving heavy equipment.

But the main topic of interest on this warm March evening is the softening snow conditions. According to one groomer, one trail was “pretty well toast.” Another spot needs “a coat of paint,” meaning snow smoothed over areas where dirt is almost peeking through the slush. As they talk, the men trade good-natured jabs.

At 4:58 p.m., a paper grid with a schedule is passed around the room, and each man takes a turn looking at it, noting his day’s assignment. Then, with the smooth practice of ritual, they clean up their leftovers, toss on jackets, grab packs, and head out to the yard. Ten or so cats sit waiting quietly until, one by one, they roar into life. Eventually, with every motor running, the groomers have to shout over the engines to be heard.

Tonight, I would first be tagging along with shift leader Kurt Willard in a “free cat,” an untethered machine, before joining Alex Swanson for a ride in a “winch cat,” affixed to the mountain via a metal cable and used to groom the steeper runs.

“It’s a pretty steep mountain,” Willard says. “It’s pretty demanding.” Willard, who has worked at the resort for 29 years and been a shift leader for 15 years, walks around the yard, talking with his crew as they conduct their pre-trip vehicle inspections, finalizing assignments, and discussing strategy for the evening.
Climbing into cat #12 to join Willard for the first part of his evening shift, I have to take two steps, first positioning my boot on the icy, slippery track. “Careful there,” Willard says. Climbing into the cab, I make sure not to bump anything. I find the interior of the machine surprisingly complex — every surface littered with switches, gauges, buttons, and levers. And rather than a steering wheel, the operator uses a joystick to maneuver the machine. I settle in for a tour.

Today, the temperature in the valley had reached 49 degrees, and the snow is slushy. “Softer conditions give us the most difficulty,” Willard says. Sometimes, when it’s too slushy, the groomers can’t make it up the hill and have to take the cat tracks up and start out on the higher frozen terrain until the lower slopes have hardened.

Later in the evening, after my time with Willard, I join 14-year resort veteran Swanson for a ride in the winch cat, tilting back in my seat as we inch up some of the steepest portions of groomed slope on the mountain. Before he came to Jackson, Swanson spent a decade grooming at other resorts, and he’s driven a winch cat for 24 years, first learning the machine during his rookie season. “Challenging conditions are a high point for me,” Swanson says. “This is a tough mountain to groom.”

Just over 30 people make up the grooming team, which works in two shifts. The “night shift” works from 4:30 p.m. until 12:30 a.m., while the “morning shift” goes from 12:30 a.m. until the slopes open at 9 a.m. Willard prefers the night shift. “If you really like to ski, the morning shift is better to be on fresh powder and corduroy,” he says. “Night shift is more regular-people hours.”

Swanson also prefers the earlier shift. “I’ve always been kind of a night owl,” he says. “But it kicks your ass after doing it over 20 years.”

No matter the shift, groomers deal with numerous hazards, often working the mountain in low visibility. “It can get hard to see and dangerous,” Willard says. “And then there’s the avalanche danger. You have to be aware of the wind and how hard it’s snowing. Ski patrol helps with that.”

Avalanches that trap machines are rare, but machines do get stuck in slides from time to time. During his 29 years grooming the slopes, Willard has been caught a few times. Once, he was able to skillfully wiggle the machine out, but the other extractions involved some digging. “It was kind of strange at first,” he says. “I was feeling the movement of snow as opposed to the direction I was moving the cat in.”
To help with visibility, reflectors are placed in key spots around the mountain to keep operators on course. If conditions are hairy, the more experienced operators take the trickier routes. Sometimes, they will wait out winds and stop for a few minutes until visibility improves. A few places, such as the crossing above Cheyenne Bowl, are exposed and take extra care. Facing these potential hazards brings the team together.

“Our job is a little risky, so there’s a high level of trust and camaraderie,” Swanson says. “Every crew is different, every mountain is different. This night crew is one of the best I’ve ever had the pleasure of working with. You’ve got to have respect for your fellow operators and employees. Without that, there’s no camaraderie.”

The camaraderie often comes in the form of good-natured ribbing over the radio. “What enables me to have fun with them is to rap on the radio, talk a little trash, poke and push buttons in a fun way,” Swanson says. But the crew always looks out for one another. “Sometimes it’s, ‘Watch your back tonight; it’s gnarly and you can get buried,’” Swanson says.

During big storms, the snow comes down hard and fast, increasing the danger — and concentration required — by the hour. “The mountain loads up really fast,” Swanson says. “I like the nights that are white knuckle because I’m uber-present. If it’s a nice night, I’m not as present.”

Weather isn’t the only hazard on the mountain. Skiers have been known to sneak onto the slopes after hours to take a lap on fresh corduroy, sometimes drinking, sometimes under the influence of drugs. Winch lines can reach for a third of a mile, creating potentially deadly consequences for slope poachers. “It’s dangerous as hell,” Swanson says. “If someone skis into a cable at 40 miles per hour, it’s probably going to kill them.”

With a limited number of hours to groom the slopes, the highest priority is given to beginner terrain and racecourses. Expert slopes have lower priority. But wherever they’re grooming, the crew takes their work seriously. “If we leave a chunk, skiers could hit it and crash and get injured,” Willard says. “What we do has a lot of bearing on whether or not a ski instructor’s lesson goes well or if someone has a good time here.”

Having a detail-oriented personality helps, though the job also allows for time to think. “I think we all have similar personalities,” Swanson says of his colleagues. “A lot of us are obsessive-compulsive. We spend a lot of time trying to solve the problems of the world. There are some really deep-thinking people who do this job.”

Later on in the evening, darkness settles over the valley and the town below flickers to light. A brilliant silver moon emerges, lighting up the slopes. A plane circles to land at Jackson Hole Airport, lights blinking. “We see every meteor shower, the space station, we can see which planets are up,” Swanson says. They also see wildlife, including deer, moose, elk, fox, and coyotes. “I even saw a mountain lion jump over my winch cable once.”

Though the hours mean missing out on a lot of nightlife, the trade-offs are worth it to the people who practice this line of work. “For all we might miss, we get to experience something that is pretty much just for us, something that nobody at a dinner party or concert experiences,” Swanson says. “That’s what we get in trade.” 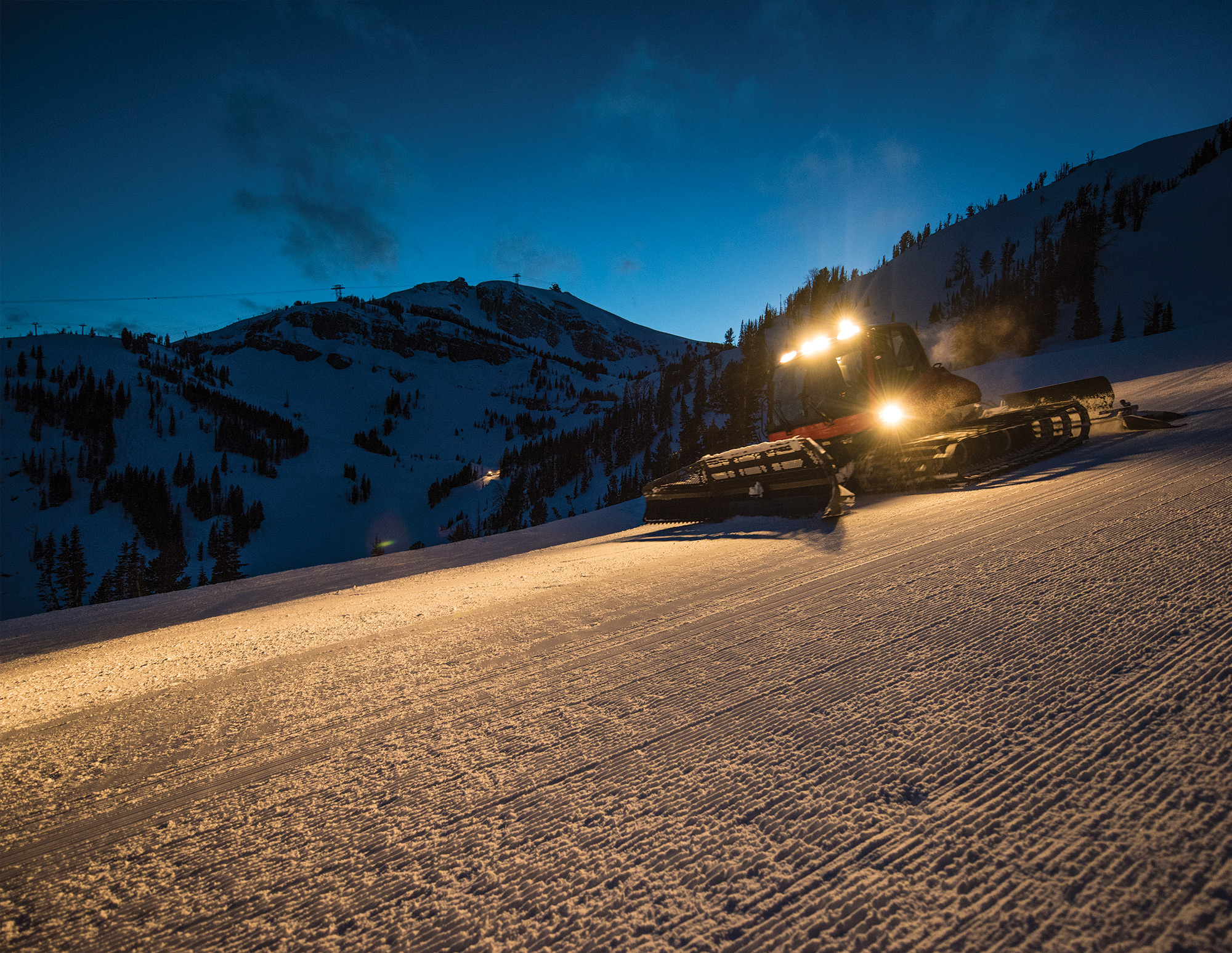 Jackson Hole Mountain Resort groomers work the slopes at night to get them ready for the next day’s skiers. 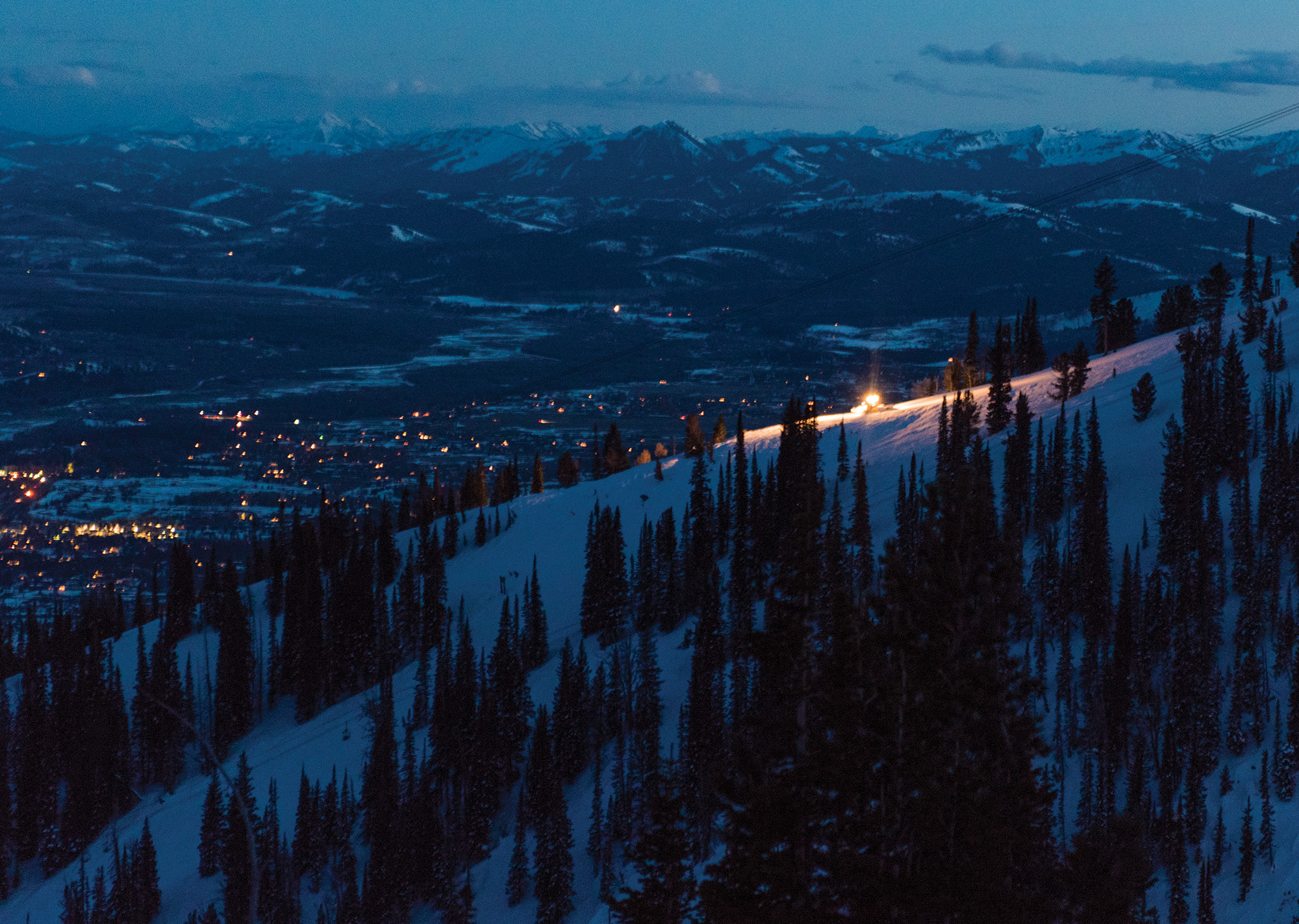 From their position high on the slopes, groomers have a unique view of the valley below. 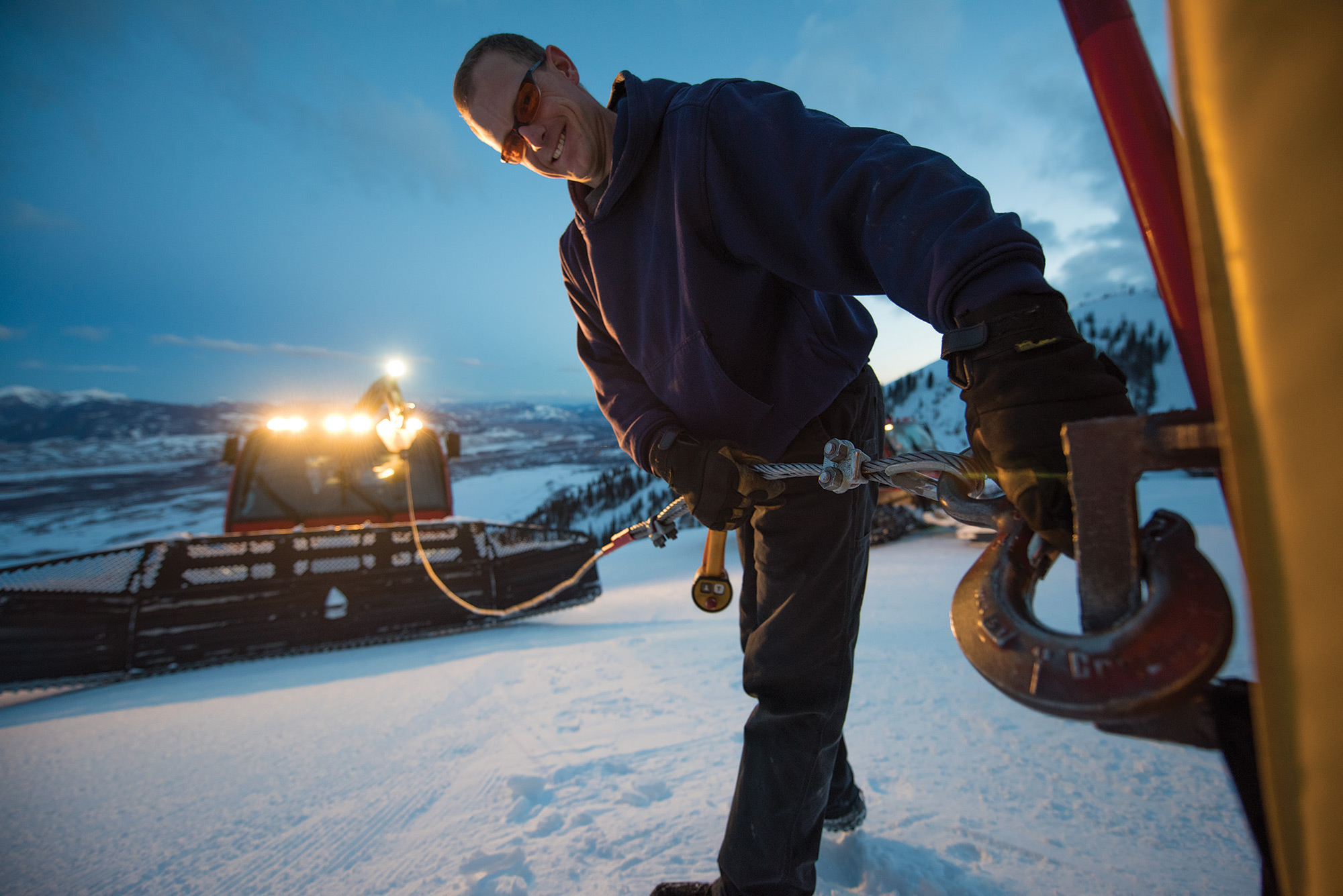 Justin Ellis hooks up his winch cat before grooming a steep slope. 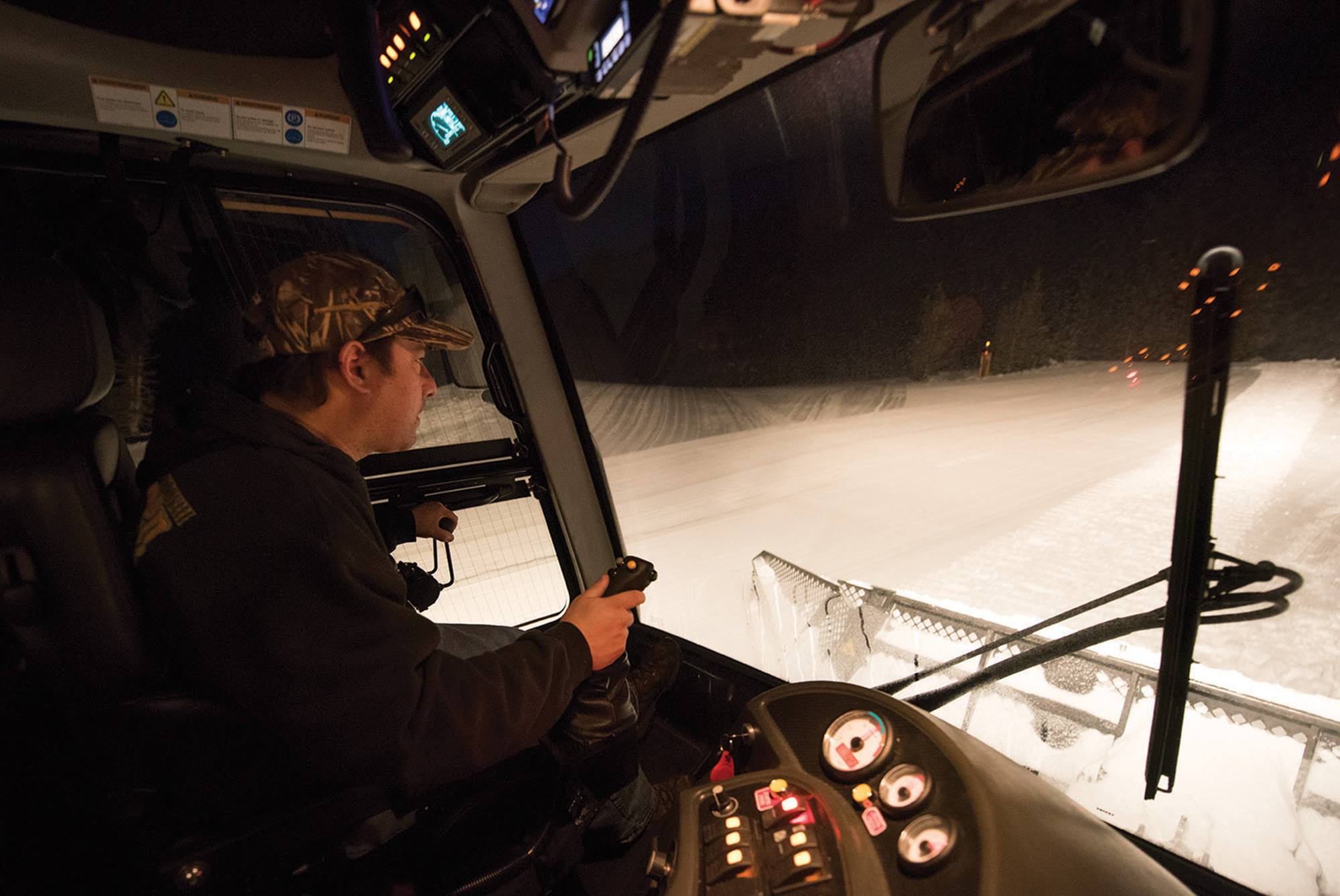 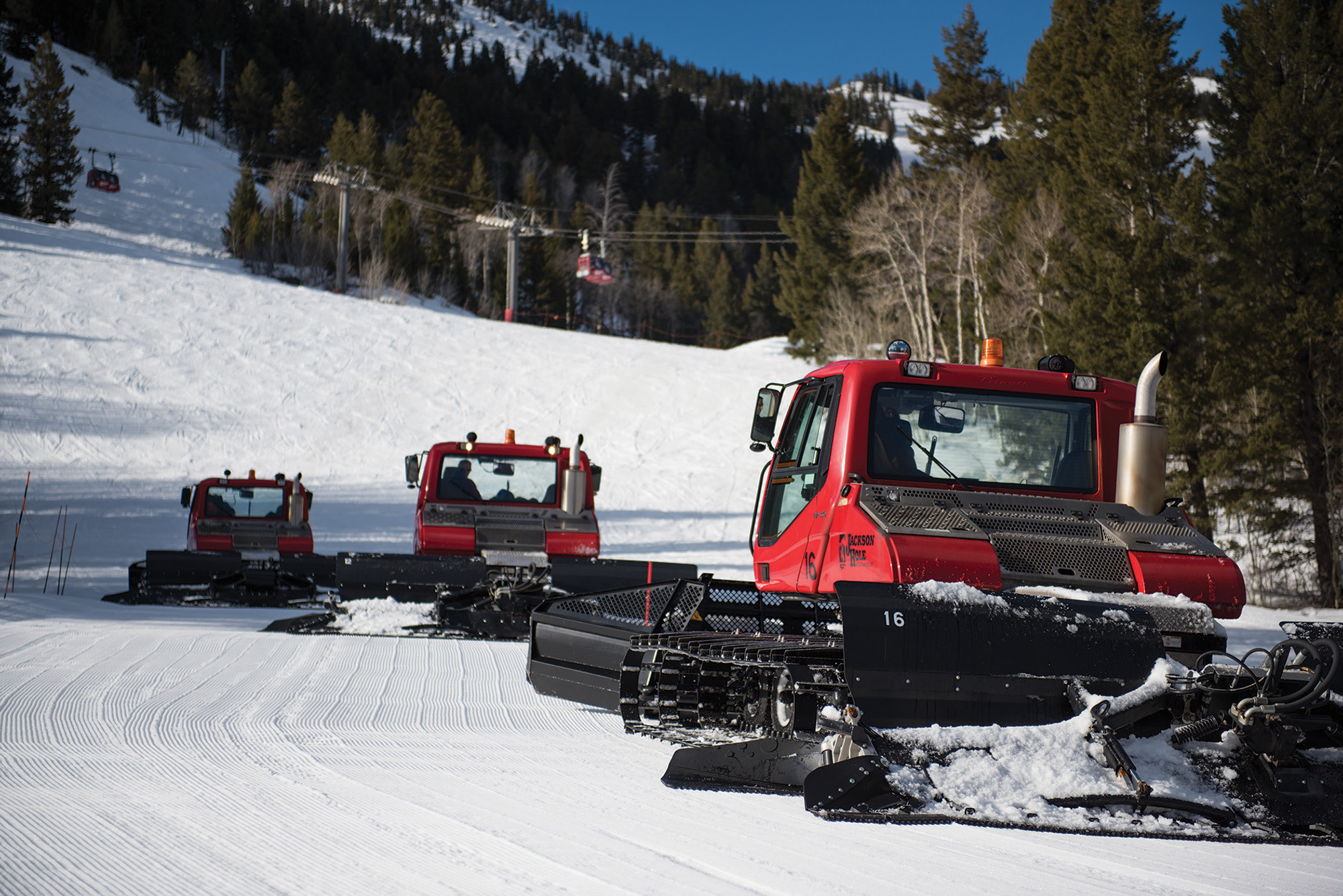 Shortly after the slopes close for the day, the grooming team heads uphill and gets ready for the night’s work. 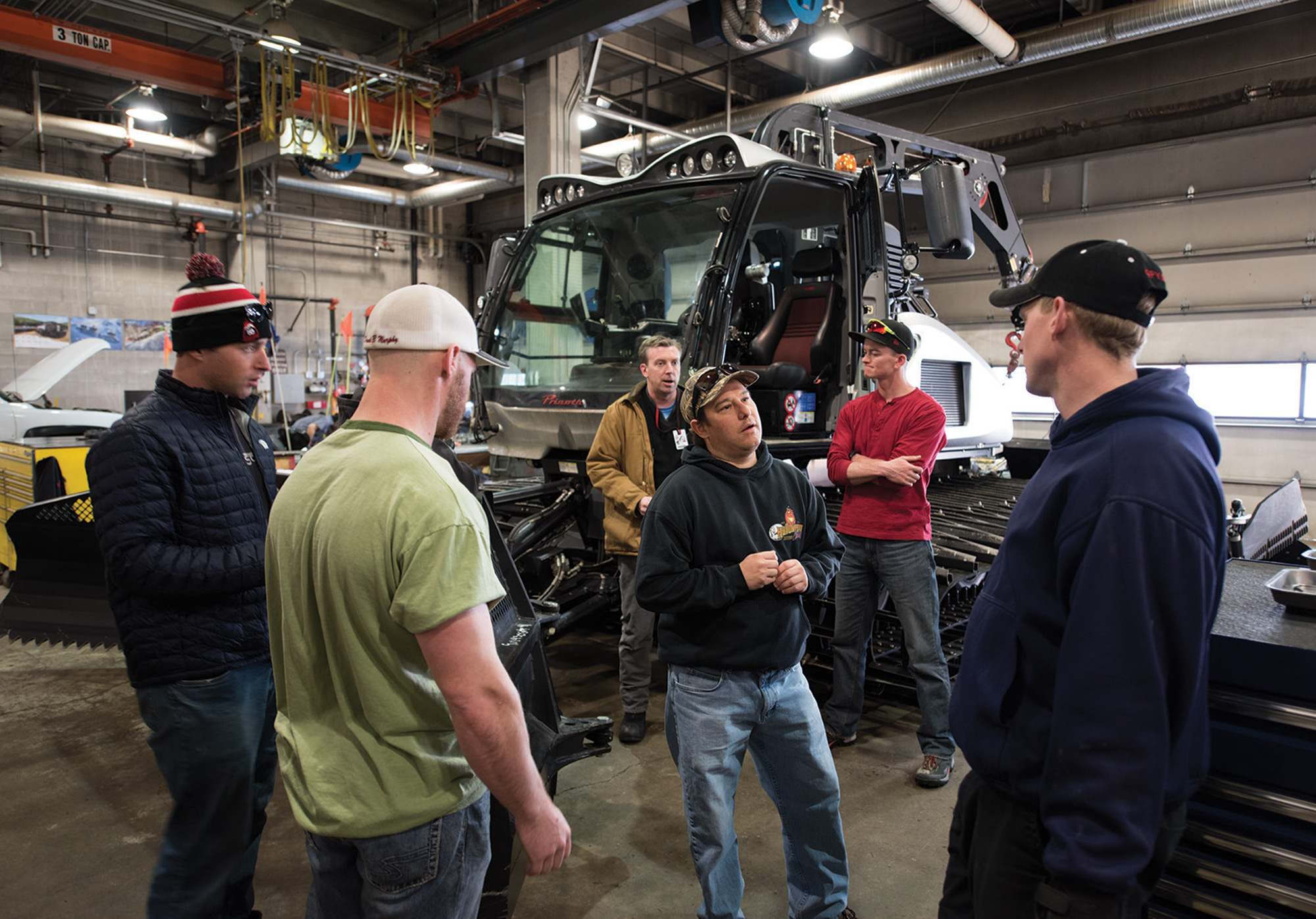