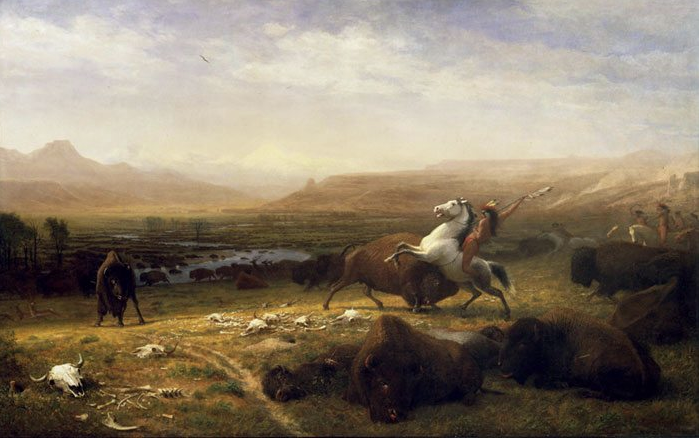 The Buffalo Bill Center of the West and Gilcrease Museum have partnered to present a groundbreaking exhibition titled Albert Bierstadt: Witness to a Changing West. Bierstadt (1830–1902) is best known as America’s premier western landscape artist. He was also a renowned history painter, a rarely discussed element of his legacy. This major exhibition will address Bierstadt in context of his treatment not just of majestic mountains and lakes but more prominently of bison and American Indians, whom he approached as key subjects for his art.

Bierstadt’s history paintings conveyed moral messages as he strove to preserve the dignity of Native people like the Sioux and Shoshone, reveal the tragic slaughter of the American bison, and inspire empathy for the remnant herds of buffalo in Yellowstone National Park as the species neared extinction. The painter’s masterwork, The Last of the Buffalo (ca. 1888), stands as a powerful example of the national and international impact of Bierstadt’s art for Euro-American and Native people alike in the late nineteenth century. This and other selected works demonstrate the ways in which Bierstadt engaged with environmental and aesthetic issues of his time, and employed the subjects of Plains Indians and bison as iconic symbols of western America’s changing face.

The exhibition and namesake peer-reviewed publication will stand as unprecedented examinations of one of the nation’s most significant artists. This project will attract the attention of audiences familiar with Bierstadt’s complex legacy and those interested in the histories of conservation and wildlife management in America, our national parks, and the Indigenous peoples of the American West. Looking beyond the grand manner landscapes for which he is famous, this exhibition is inspired by Bierstadt’s paintings of American Indians and bison, and thus promotes fresh, new perspectives on a beloved American artist.

The exhibition opens to the public June 8 at 8 a.m. A special members opening celebration takes place the evening of June 8.

After its run at the Buffalo Bill Center of the West, this exhibition travels to Gilcrease Museum, where it opens November 3, 2018, and runs through February 10, 2019.