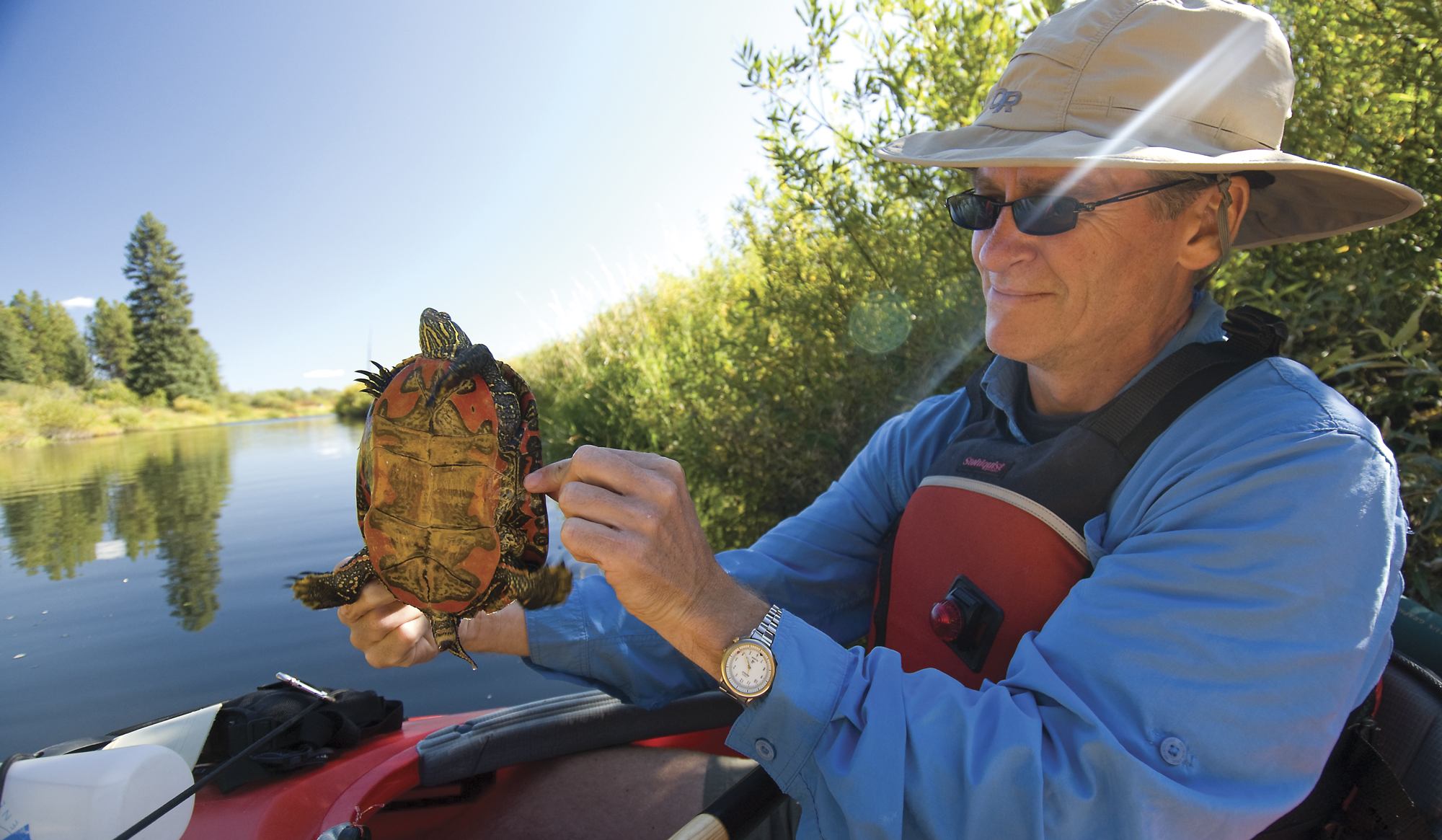 THERE’S BEEN DIRT UNDER MY FINGERNAILS since they were long enough to hold it. Walking the hills, exploring the woods, hunting, fishing, climbing, skiing and boating, I’ve grown (dare I say it) to love my time spent outdoors. But through the years, for mysterious reasons, I’ve neglected my own backyard. I live in northwestern Montana after all — only a stone’s throw from Glacier National Park and acre upon acre of untrammeled wilderness.

More often than not, I catch myself dreaming of Alaskan peaks, jungles, kangaroos, and coral reefs instead of places close to home. Since when did the measure of adventure come to be defined by the gallons of gas expended on a cross-country drive or hours spent on a plane? This makes no sense. But I am not the only one. Trout fishermen from Montana prefer bonefishing in the Keys, and the guys from Florida pay big bucks to float the Yellowstone in hopper season.

Last summer, prodded more than a little by Tim Cahill’s book Lost in My Own Backyard, I came to my senses and decided to explore more

of my own territory.  I sketched plans, some expeditionary in nature, others just jaunts. First on the list? A foray into the Clearwater River drainage down in the “Swan,” the troth separating the Missions from the Swan Range. It’s on the fringe of a million acres they call The Bob Marshall Wilderness. The entire world thinks The Bob is The Bomb and Montana is the epicenter of outdoor recreation, and yet I’ve spent more days climbing obscure piles of rocks in the Nevada desert than exploring The Bob.

WITH THE WIFE, two stepsons, and black lab in tow, I arrived on the shores of Clearwater Lake. The lake is the birthplace of the river, so logically I had concluded, a thorough exploration of the river had to start there. My wife, Heidi, needed little convincing that our sally would be fruitful one way or another. She’s like the lab, loves water and running outside, it matters little where. The lab was happy just to be wherever she was, and as it happened, this would be her last camping trip. And when it comes to understanding what makes a good camping trip, those boys, Max and Sam, 9 and 11 years respectively, have set me straight. As long as there are campfires over which to boil tin cans of pine tar and mud puddles to roll in, they too are happy.

The Clearwater River is a 46-mile largish stream that flows through a chain of seven lakes in the southern portion of the Swan Valley. Our plan was to hike and paddle as much of this river as a couple of long summer weekends would allow, starting from the headwaters at the lake.

We barely made it to the lake in time to make camp before dark. On the drive in, Max saw a coyote on top of a dirt pile next to the road. He insisted I backtrack several miles to get another look, despite my own insistence that there was no way a coyote would hang around long enough for that. But there he was standing proud on Max’s dirt pile. And even I had to agree — it was a big one, and yes, not a shabby animal either. Good eye Maxwell.

Finally, at the trailhead we carried the canoes to the lake from the car, a distance of only a half-mile. By the time I dropped the second one on the shore, the sun was setting over the lake. It turned glassy and those big cutthroats commenced sipping ravenously, concentric rings spreading out, overlapping so densely that the silvery surface looked like some kind of screen saver.

This put the boys and me into a frenzy. I rushed to pitch the tent and get a greasy Brassie in the surface film. It soon became obvious that I had to abandon both projects to assemble rods for the kids and tie on their incisive choice: a couple of huge chartreuse bugs preferred by stripers on Cape Cod. Before my fly was wet it was basically dark. I noticed their rods discarded in the grass. From way down the shore I heard Max, Sam and Heidi let out coincident howls about something. As I entered the diffuse sphere of bluish light shed by Heidi’s LED headlamp, I didn’t see anything unusual. A bunch of size-14 caddis flies were stumbling around on the rocks. “Watch. Wait,” they said. In an instant the first bat appeared and snatched a fly fluttering not two inches from Sam’s hand. The bats dove again and again, unafraid and coming in from the blackness practically to our hands, feeding by the light of our lamp. They darted about so quickly we could just make out the boney scaffolding of their webby wings. Flying in at a bazillion miles an hour (our rough guess), they crashed the size 14 bugs with grand precision. It was a beautiful thing. They never missed. Not even once.

We wondered how they managed in the absence of our light. I started in about echolocation and explained how we could never watch them hunt in complete darkness. There was a pause. Max shined the blinding light directly in my face and said, “No kidding.”

That first weekend we couldn’t pry ourselves away from the lake to continue our planned exploration of the Clearwater River proper. Those three days were full of fish: the cutthroats, and a bunch of brookies, with several 16-inchers falling for the chartreuse striper flies, thusly receiving a baptism of salt and pepper and a blackening over the fire. We ate with wooden “spoons” carved from sticks because we forgot to bring our metal ones. We zigged and zagged the canoes all over the lake, going ashore where we figured a frog, or a snake, or something bigger, or something smaller, might be hiding in the same tall green grass where, it was obvious, the deer and elk preferred to make their beds. We explored the outlet, a tangled logjam with barely any flowing water offering no chance to float downstream from there, as I had first imagined might be possible.

Watching the boys poking and paddling along the opposite shore, with the Swan Range looming in the background some 3,000 feet over our heads, they looked smaller than they had ever seemed. I imagined The Bob, immediately out of sight behind the Swans, and wondered what that wilderness will mean to Max and Sam when they are older, when they are men. At that moment the lake possessed limitless appeal to them, and I had to admit, it did to me too. In that place, not far from town, we were a world away from our daily lives.

Dirty and fatigued we loaded up the boats, vowing to float the river the next weekend, and drove home.

THE SECTION OF THE CLEARWATER that’s easiest to float, in terms of logistics, is the 3.5 miles immediately upstream of Seeley Lake. This is the Clearwater River Canoe Trail, a well-traveled, but by no means crowded route that can take anywhere from a couple hours to all day to float, depending on how distractible, patient, observant and curious you are. The water and surroundings are mellow and flat. This place doesn’t jump in your lap, say, the way the Grand Teton does. But, I am guessing, Russ Chatham never painted the Tetons.

The incline of the land is so low here that the river becomes confused as to which direction it should flow. It twists and turns, even doubles back on itself at one point, a place where we had a couple options. Those options served to detain us, as we considered how embarrassing it would be to get lost on a river. But that was the point of our trip: to lose ourselves close to home.

We were unable to see which direction to go, and to me it was like paddling in the Everglades. Instead of mangroves, high willows extend in most directions. And the birds were everywhere, many hidden in the thickets, given away only by their songs. We spotted, or heard, yellow-headed blackbirds, sandhill cranes, common loons, great blue herons, osprey, Canada geese, eagles and several species of ducks.

There is no wrong way in this place, I reminded myself. The tangled water is always smooth. We let it escort us gently down threadlike tunnels and passages so still and enchanting, especially when sunlit, that, if it weren’t for the turtle-hunting kids squealing in the sticks, Heidi and I almost felt we were it: the last living Homo sapiens. We may have crossed paths with other mammals, their eyes on us, in this country where white-tailed deer, moose, mountain lions, beavers, muskrats, mink, and other creatures thrive. Our most remarkable wildlife encounters, to the boys’ delight, were the garter snakes, western painted turtles and spotted frogs.

For a fisherperson, this place is a box of chocolates, particularly if you aren’t proud about methods and you fish the lake too. After our experience on Clearwater Lake, Max and Sam insisted we bring along every fly we’ve ever tied, even those giant gaudy saltwater patterns. This sleepy waterway is home to northern pike, Westslope cutthroat, brown and rainbow trout, yellow perch, largemouth bass, and Kokanee salmon. We successfully steered clear of the bull trout. The population is small and, according to the biologists, smaller every year. These are lake-dwelling migratory fish that spawn in the tributaries accessed via the mainstream.

As the channel widened and the Clearwater offers its waters over to Seeley Lake, we came to a huge “field” of water lilies. Paddling over to the big white blossoms, I suggested that Heidi paddle ahead and do her Julie Andrews thing. We enjoyed the last bit of easy water, then headed east across the lake to the take-out. Covered by a canopy of trees the little ramp was hard to see. Pulling the boats ashore, we walked the level 1.5-mile trail back to our car at the put-in, and marveled at the fact that we didn’t have to arrange a shuttle. As with the river, the distractions along that perfectly clear path made us wonder more than wander at a decent pace. The world has a way of expanding when you pay attention the very moment you step out your door. 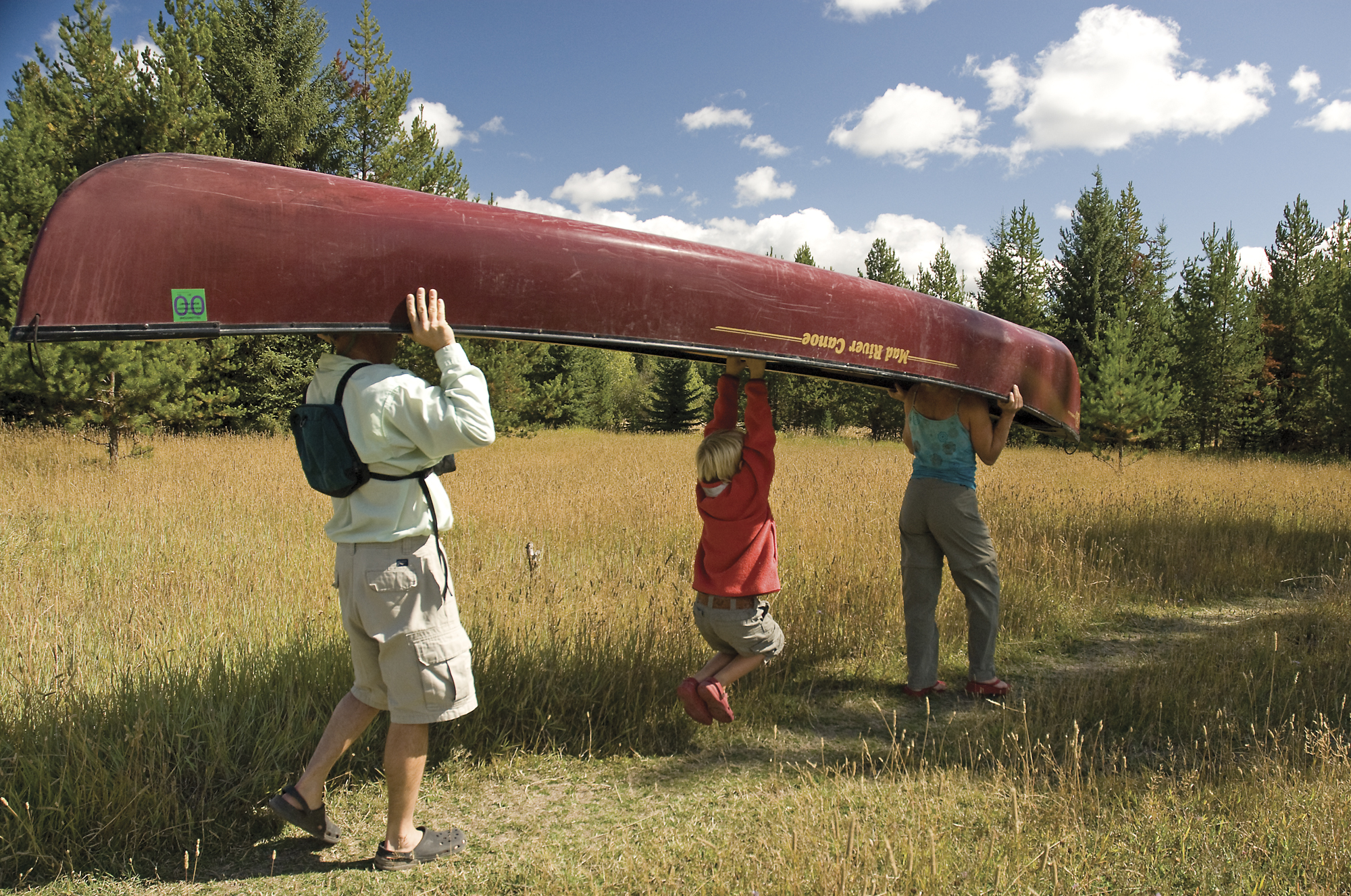 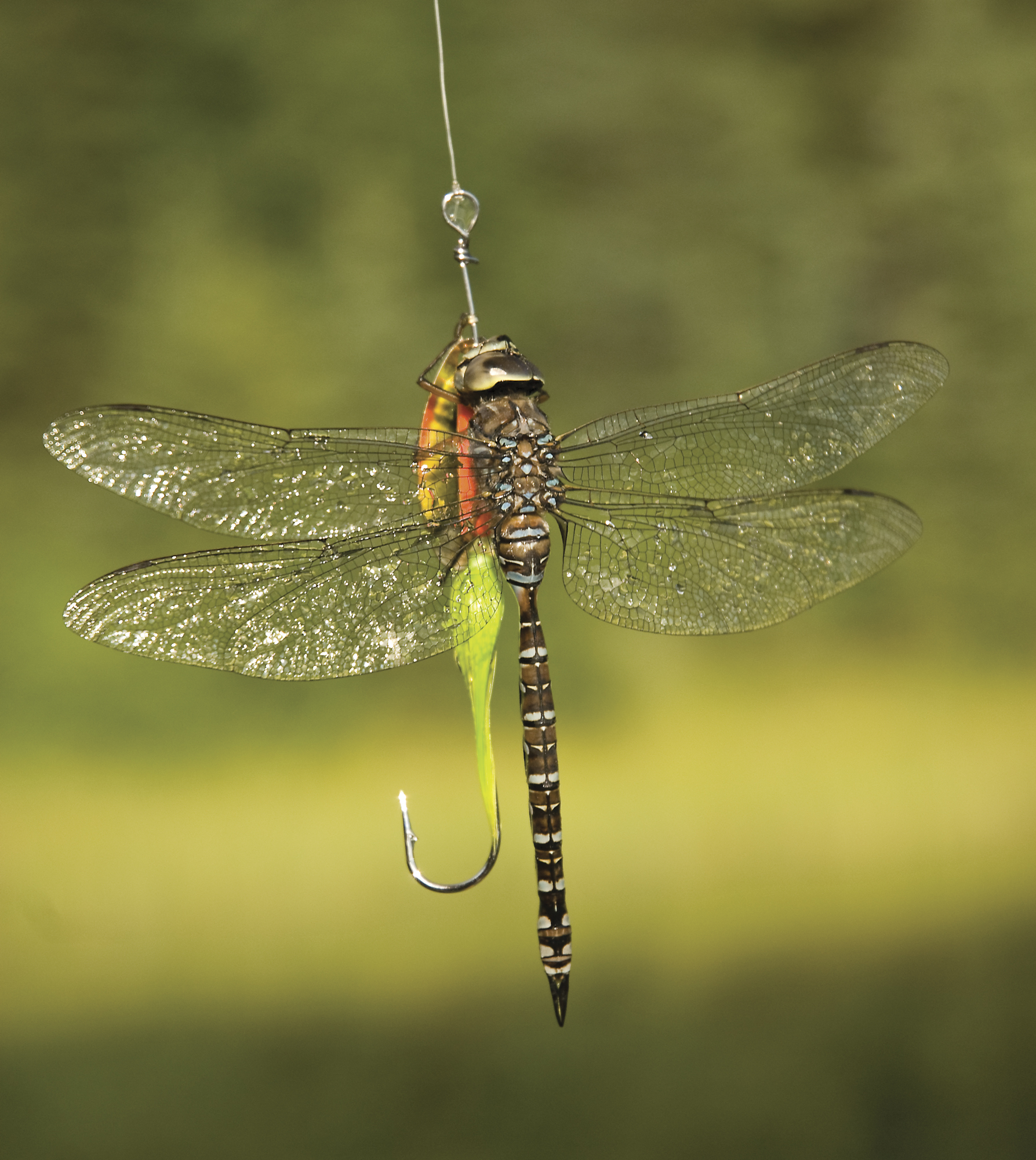 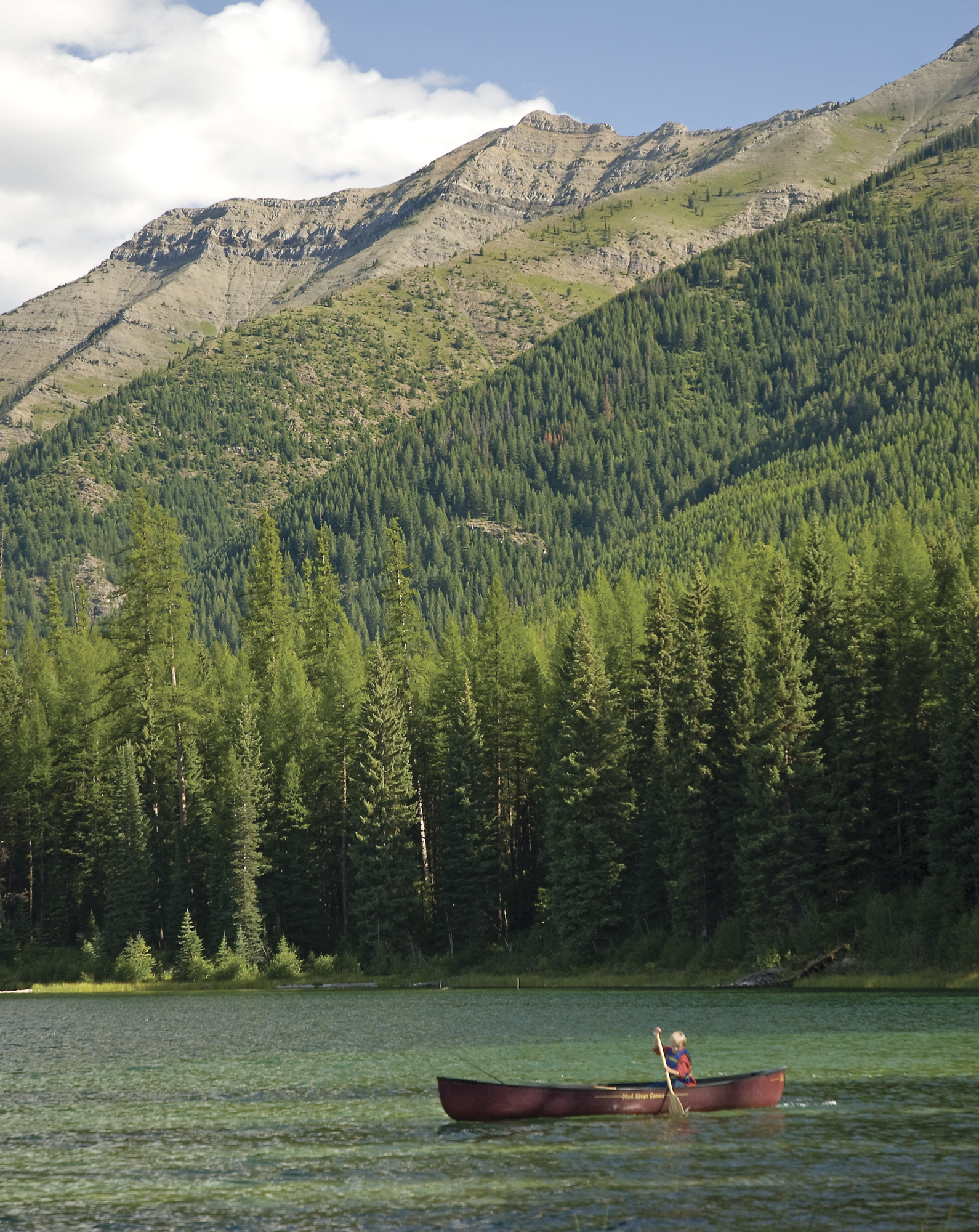 Max Marty paddles the shoreline on a quest for fish or frogs. 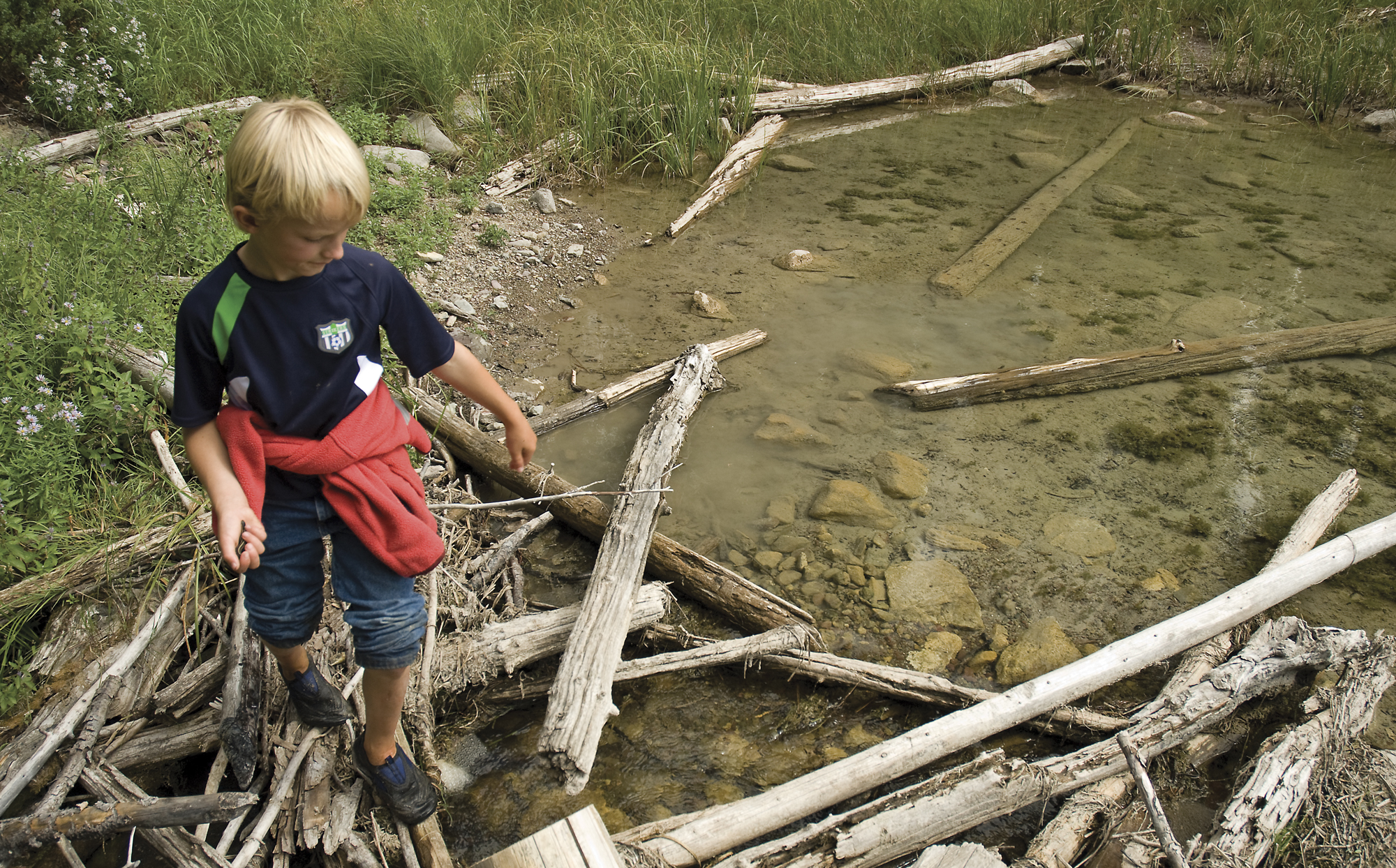 With snake in hand, Max Marty scopes the outlet of Clearwater Lake for a few frogs.