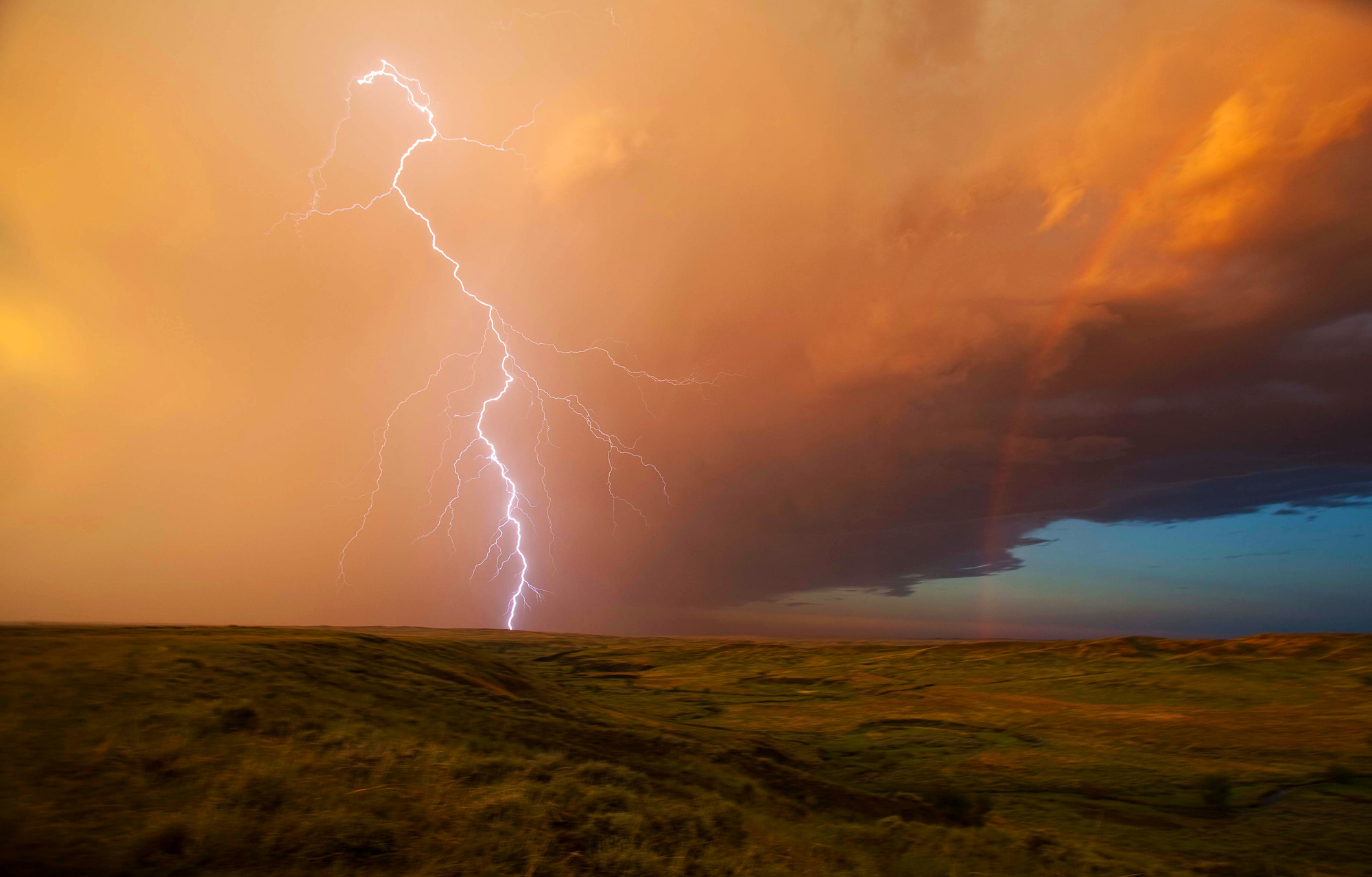 14 Jul Adventure on the Silent Prairie

SOONER OR LATER, THE SAME THING HITS EVERY PRAIRIE TRAVELER. After you’ve absorbed the distance and the sky, maybe mud or dust or both, the silence takes you in its arms.

It’s not the lull of a library, or even the quiet of a tomb. It’s certainly not that pregnant hush during a clutch moment in a ball game, when everybody holds their breath waiting for the next thing to happen.

A prairie silence is a different critter, something you can chew on for a while. It has depth and you might be surprised at what you can hear in it: a puff of wind, the chirping of a bug, birds probably. The thump of your own heart. It offers all those things the rest of the world is too noisy to reveal, and you can become part of it. All you have to do is get out of the car and listen.

Prairies remain the most overlooked and underappreciated of American landscapes. Most of us grew up under the tutelage of European tree culture, which taught us that natural beauty needs trees. And prairies, by definition, don’t have a lot of them. Plus, when you can see for 50 miles and not spot a soul, such a vista can daunt, can make you feel a little small. It spells out that you are undergoing no illusion of isolation. You’ve found the real deal. As a result, many people cross the prairie with a heavy foot on the pedal. Screw the price of gas. Find some trees.

But for those with the time to slow down and the inclination to pay attention, the prairie offers gifts. The smell of sage. The solitude. The wildlife. The stars. Oh, the stars you can see!

Now, a relatively new organization called the American Prairie Reserve is offering a little help, along with an open gate to a great big chunk of prairie. If you’re so inclined, you can even camp with bison.

“We encourage people to come out and poke around,” said Damien Austin, ranch foreman for APR, which owns or leases 123,000 acres of land just north of the Charles M. Russell National Wildlife Refuge.

That means people are welcome to camp, hike, watch birds, study the intricacies of a prairie dog town (like a coral reef, a dog town supports scores of other species), hunt, bicycle or just hang around with bison. Almost all of the APR property is open to the public, as are the thousands and thousands of acres of nearby public land. APR even offers maps, showing you how to find the highlights.

The rules are few and reasonable: keep your vehicle on established roads and trails, don’t be foolish with fire, show the wildlife some respect.

“We want people to see the wildlife and not be afraid of them,” Austin said. “There’s nothing to be afraid of, as long as you’re respectful.”

That means don’t go charging up to a bison, try to slap one on the behind or throw stones, hoping to elicit an exciting pose. Bison are stolid and can ignore a lot, but they can run as fast as a horse and their horns and hooves can be lethal.

APR’s bison are the reserve’s most charismatic and controversial  [APR-DaveShumway_web] residents. After being hunted nearly to extinction in the 19th century, the shaggy giants are on a comeback and now number roughly 500,000 across the country. But few of those herds are what ecologists call “conservation herds,” animals left mostly to their own devices, allowed to graze and wander and breed as nature dictates. APR’s herd is one of them. These animals aren’t raised for meat. They’re here to do what bison do: shape and interact with their environment.

Not all of APR’s neighbors appreciate having bison around. Some ranchers fear they will tear down fences, devour haystacks and spread disease. So the project is not without controversy. But in terms of prairie tourism, it’s hard to find a bigger invitation.

There’s plenty of room for campers to spread out and get away from everybody. Or, for $10 a night, you can grab an improved campsite near ranch headquarters, where you’ll find fire rings, vault toilets and non-potable water.

For travelers who prefer an escort into the Big Open, APR offers other options. First of all, volunteers are welcome. In exchange for a few days labor — fencing, digging post holes, that kind of thing — you’ll be wined, dined and escorted to some of the reserve’s most interesting places, where an APR specialist will explain things like the migratory patterns of antelope, the interconnections between bison and prairie dogs, what it takes for prairie birds to prosper.

Volunteers stay in the reserve’s collection of yurts, modeled after the native dwellings of the Mongolian steppes.

“I don’t think I’ve ever worked so hard in my life,” said Sue Keeley, who volunteered in 2011 with her 17-year-old son. “But it’s a nice kind of tired. It was very much a positive experience.”

Highlights included listening to elk bugle, astonishing sunsets and sunrises, and the sheer scope of the distances.

“It’s like a different universe,” added Robbie Parmer, another volunteer. “It’s so vast and quiet.”

For those who want to explore the prairie without raising blisters, the Yellowstone Safari Company, with decades of ecotourism experience in Yellowstone National Park, will begin offering early autumn trips to the reserve starting in 2012.

Safari Company owner Ken Sinay said the trips begin at Fort Benton, the former hub of Montana’s fur trade, with talks about the human and natural history of the plains. Then comes a half-day canoe trip on the Missouri River, then three nights exploring the reserve and the adjoining Charles M. Russell National Wildlife Refuge, with lodging in a comfortable hunting lodge on one of APR’s ranches.

Along with a big variety of raptors and other birds, visitors can expect to see bugling elk, bighorn sheep and bison.

“But this isn’t just bison,” he said. “This is bison operating in a natural ecosystem. And if tourism is going to contribute to conservation, this is the kind of project we need.”

He’s also hoping the idea of prairie tourism will catch on.

“I truly hope I’m up there someday in the future, giving workshops to the locals on how to service the tourism industry,” Sinay said.

The National Geographic Society is also leading classroom-type excursions for teenagers from around the country. Students choose an “assignment,” such as photography or wildlife conservation, and learn as much as they can about it during the excursion, according to Deb Harris, director of student travel and photo workshops for the society. The trips last between 12 and 22 days and divide their time between the reserve and Yellowstone.

That way, she said, students get a look at the cradle of North American conservation — the park was founded in 1872 — and the cutting edge, where APR aims to assemble a collection of 3 million acres of public and private land and manage it with conservation as the primary goal.

APR is indeed on the cutting edge of conservation. Though its methods are sometimes viewed skeptically, even inside the conservation movement, APR is putting its money where its mouth is. It’s in this business for the long haul.

It selected the project area — along the banks of the Missouri River — because, unlike most of the nation’s prairie lands, the ground has never been plowed, despite decades of government incentives to root up the native grasses and replace them with something else. With their deep roots and their ability to survive stone-cracking cold and drought and raging fire, prairie plants can withstand anything but a plow. With the grass in place, bigger creatures have a chance, so the reserve is buying ranches from willing sellers, tearing out unnecessary fences, bringing back bison, leaving the prairie dogs alone and leaving the plow where it belongs, which is somewhere else.

Part of that process involves showing the neighbors — And that’s why APR officials are welcoming visitors, whether they are do-it-yourself campers, volunteers or the customers of outfitters.

In this part of the Montana prairie, the land is open and accessible. The quiet can still embrace you. APR says you’re welcome to be a part of it. 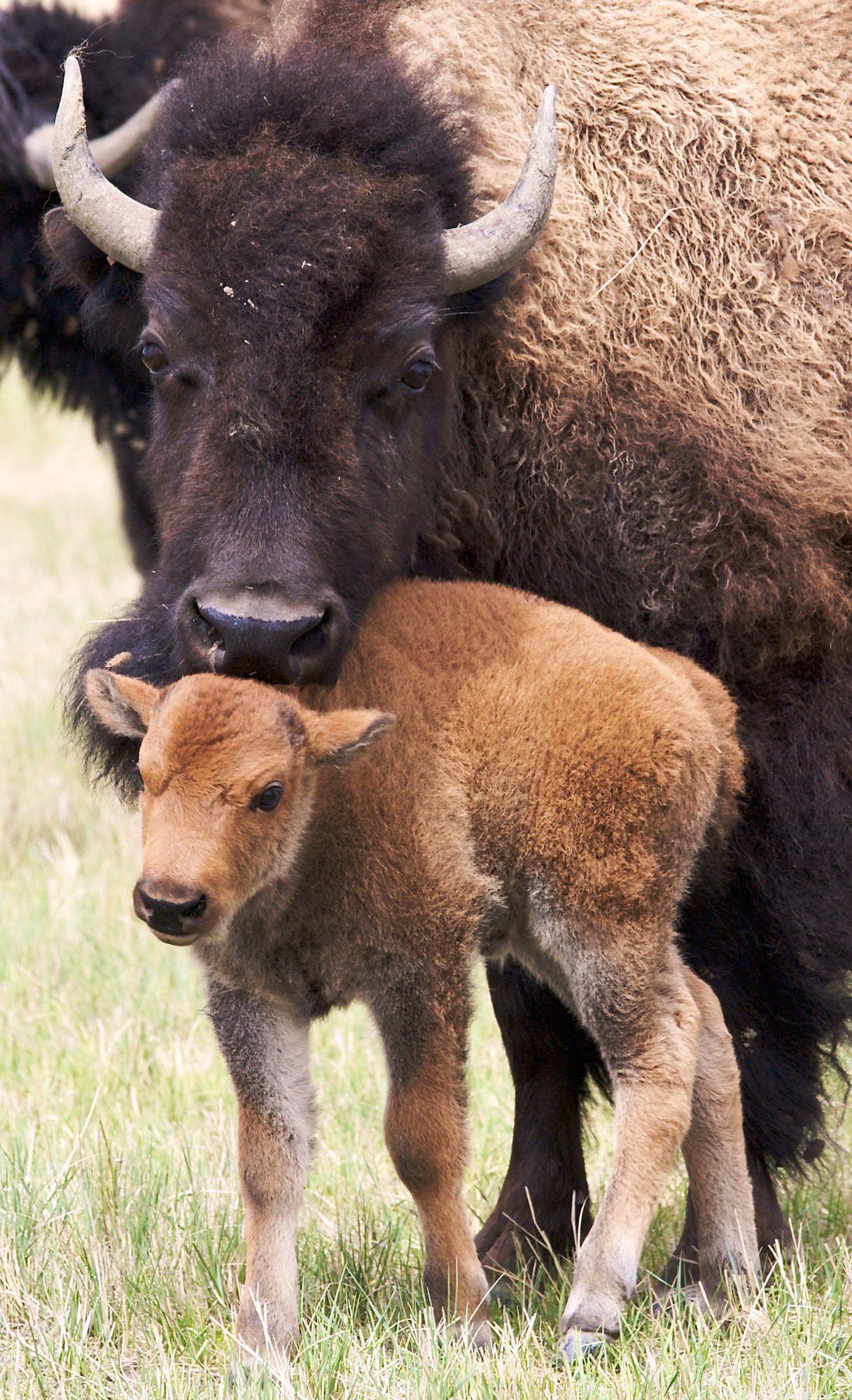 A mother bison and her new calf. Photo by Gib Myers 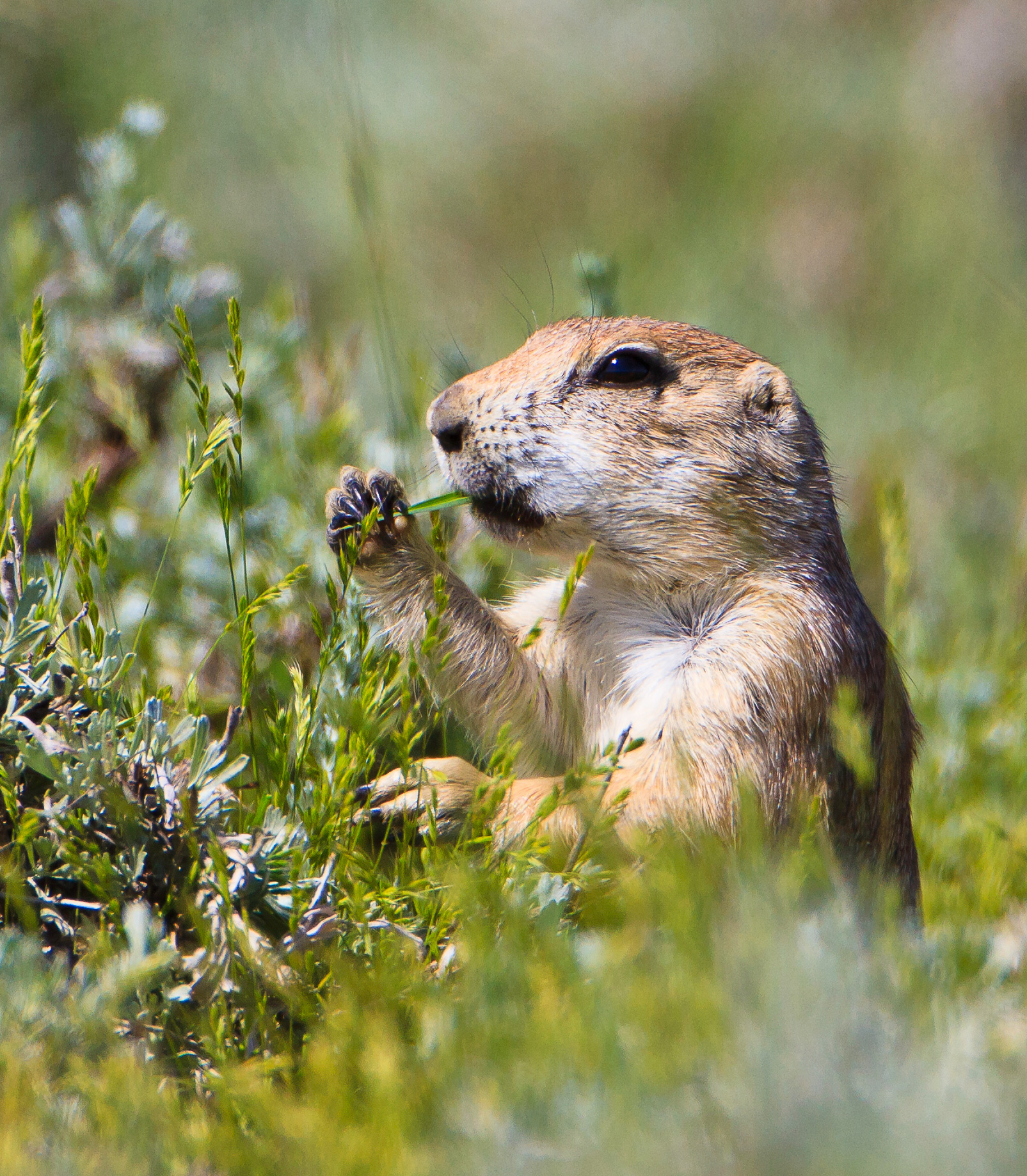 A prairie dog munches on grass. Photo by Dave Shumway 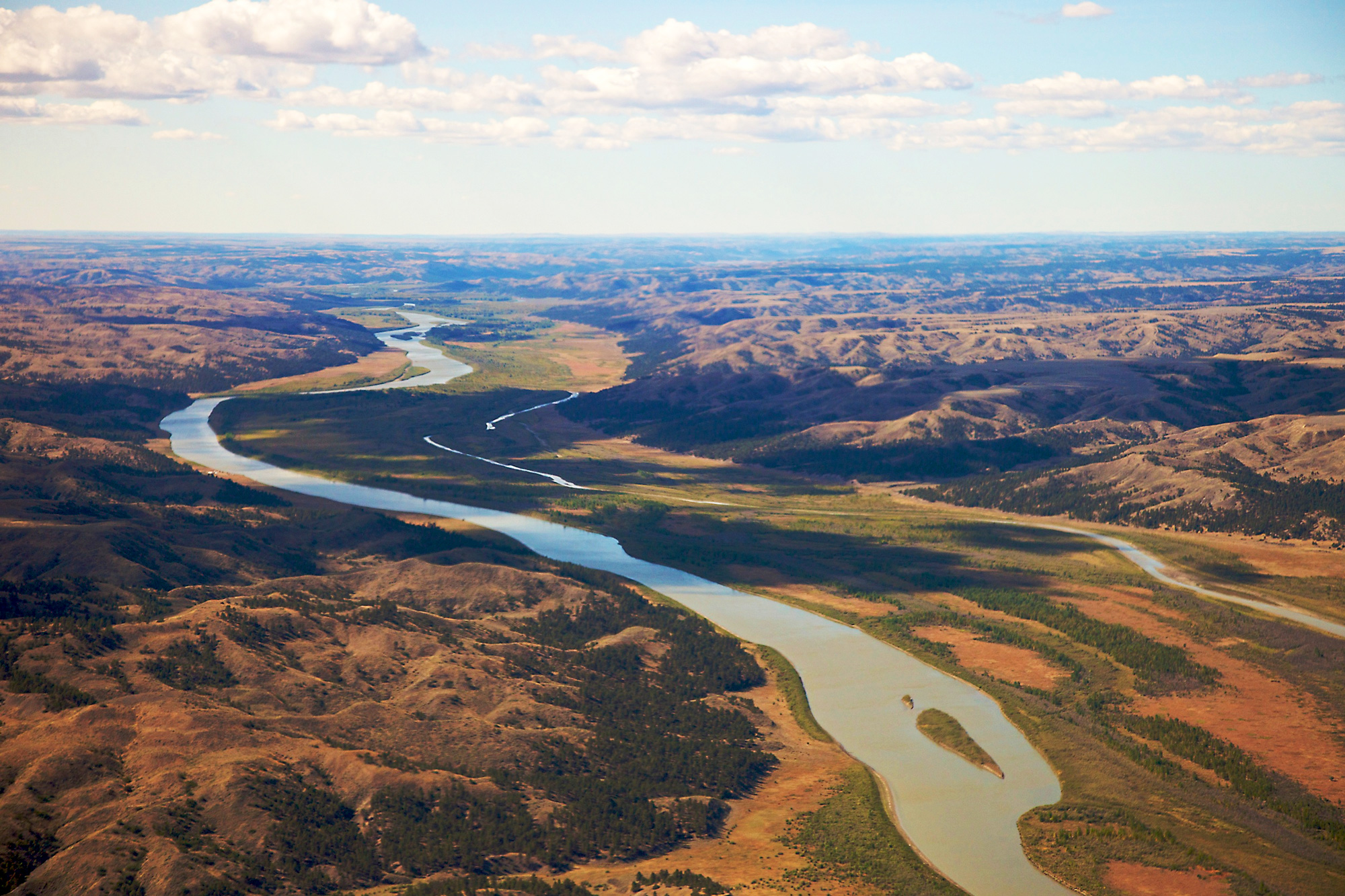 Aerial view of the Missouri River running through the prairie. Photo by Gib Myers