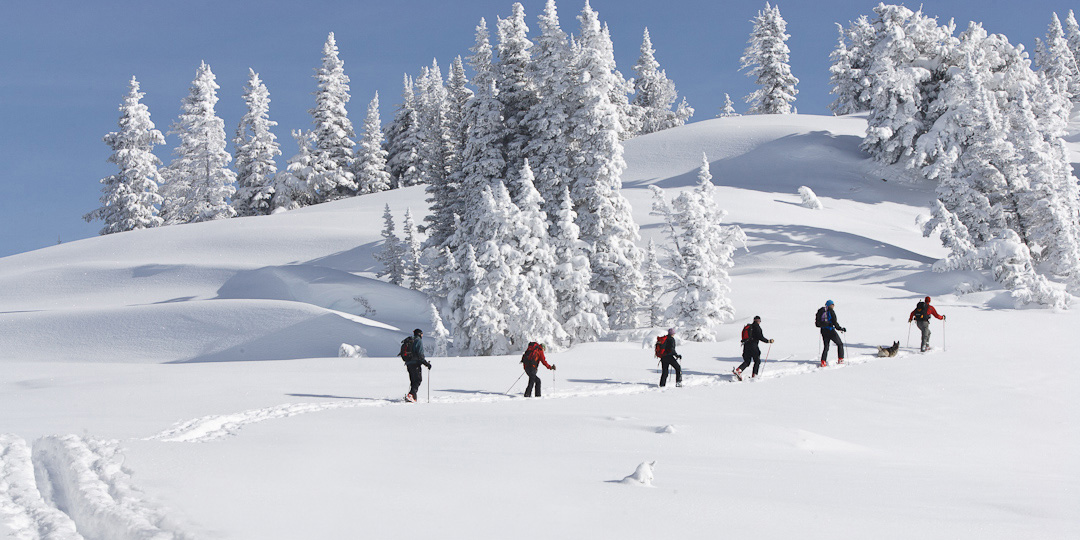 FORGET THE BUMPER STICKER THAT READS: “A bad day of skiing is better than a good day at work.” This just doesn’t apply to yurt trips in the Tetons where there’s no such thing as a bad day. Imagine: legendary, deep powder snow; magnificent ski-touring and telemark skiing terrain; and a selection of three mountain yurts, all situated for optimal access, vistas and skiing.

Mid-February last winter: a superb time to ski in the Tetons. An unusually persistent and historically dangerous heavy snowfall buried the high slopes day after day from November until late January. Two weeks of dry, milder weather consolidated and stabilized the snow pack, then early February dumped a couple of feet of fresh powder.

A recipe for perfect big-mountain skiing; particularly where there are no crowds to track it out.

As we have done annually for eight years, seven friends and I head out on a yurt trip on the Idaho side of the Tetons — this time to the Commissary Ridge yurt on the slopes of Beard Mountain. (The other two are the Plummer Canyon and Baldy Knoll yurts.) Our energy, anticipation and camaraderie are in high gear as we meet early on a clear, frosty February morning at the trailhead west of Driggs.

With specialized skis that allow us to hike uphill, we soon leave a few miles of forest road and work up to the ridge where the yurt is situated. Dense forest gives way to clearings and then, right at the yurt, the view explodes into one of the most magnificent anywhere: the Grand, Middle and South Teton peaks lie directly in front of us. We quickly eat lunch, hydrate and reorganize light packs for an afternoon of skiing on Beard Mountain, and for a recon of what the terrain and conditions will offer for the next two days. Then it’s back to the yurt for well-earned dinner and sleep.

An average of 500 inches of snow falls on the west slope of the Tetons each year. Heavily laden clouds from the Pacific stall at these high peaks until they dump their loads in order to pass over the massif. (Nearby Grand Targhee Ski Resort’s tag line is “Snow from Heaven — not from hoses.”) This accumulates on easy-angled tree-glades and open bowls at lower levels; and, at higher elevations, on some of the most exposed and thrilling Alpine Touring terrain in the Northern Rockies. If days of touring and turning among forested foothills is your dream, a yurt trip is ideal. If you’re an elevation-gaining, couloir-skiing fanatic, these yurts will serve you equally well.

Competent skiers may book and lead their own yurt trips, especially if staying in just one yurt and skiing the lower elevations. Or, the owners of the yurts, Diane Verna and Jeff Jung, provide full guiding services through their company, Rendezvous Backcountry Tours, for those looking for more serious mountain skiing or skiing yurt-to-yurt over high mountain terrain.

What do nomadic tribes of Mongolia and backcountry skiers in the Teton Mountains have in common? Not much — but the tent-like yurts of the former provide much-coveted shelters for the latter when on multiple-day ski excursions.

Modern yurts are adapted from temporary, but strong and reliable shelters traditionally used by central Asian nomads. They are compact and round with lightweight structural members providing both a frame over which to drape animal hides and rigidity in a combination of tension and compression.

Now, eschewing yak skins in favor of modern fabrics, yurts have become a popular mountain base for skiers throughout the Rockies. Accommodations within the 20-foot-diameter yurts consist of bunks for eight, a rudimentary kitchen with utensils and a two-burner propane cooker. There’s a central wood-burning pot-bellied stove for warmth and to melt snow for water. You’ll even find playing cards and table-top games for days when mountain storms hammer at the very fabric of the yurt. An instructional notice pinned to the door entitled “Yurty Things To Do” parlays practicalities and protocols.

Although mid-winter temperatures in these mountains may stay in the negatives for weeks (regularly double-digits), don’t worry about being cold. Once the snow has completely and densely enveloped the yurt’s 6-foot-high walls (you have to climb down snow steps to access the excavated door), its natural insulating qualities become apparent. This near-subnivean condition also stabilizes the structure, lending a nest-like comfort and security inside. If that all sounds a bit too cozy, there’s a “sky dome” Plexiglas ventilation window at the apex of its conical roof which can be cranked open to let loose the general fug of cooking, exercised bodies, and wet clothes hung to dry. There’s also a pit-toilet, near enough — yet far enough away, and downwind — which one accesses, slipping and sliding, via a chest-deep trench in the snow.

Back at the yurt, after such a day’s workout, we are tired, happy, comfortable, well fed and having fun. No matter the blizzard raging outside, we memorialize the day’s runs and pore over maps for tomorrow’s plan before serious socializing: jokes and Jenga, grins and Guinness, shots and shenanigans.

Our last day starts early with a few runs on the steep, lower east-facing slopes of Beard Mountain before we must reluctantly head down to the trailhead. But there’s always a “just one more” after we’ve had our “final” run, like musicians to an encore.

At the vehicles, ski boots off and shoes on, we embrace and bid each other farewell in snowy satiation. We pledge to do the same again next year.

After all, there’s wisdom in the other bumper sticker that reads: “Life’s Too Short for Hard Pack.”

More Yurts for Winter Nomads in the Northern Rockies

Idaho: Sun Valley Trekking strings together a collection of six huts in central Idaho that fan out from Sun Valley and since 1982 have offered one of the most extensive selections of backcountry terrain in the region. www.svtrek.com; 208.788.1966 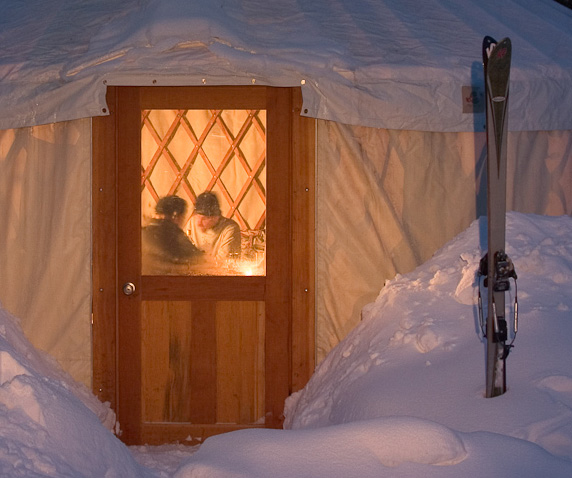 The warm glow of a backcountry ski yurt at dusk. 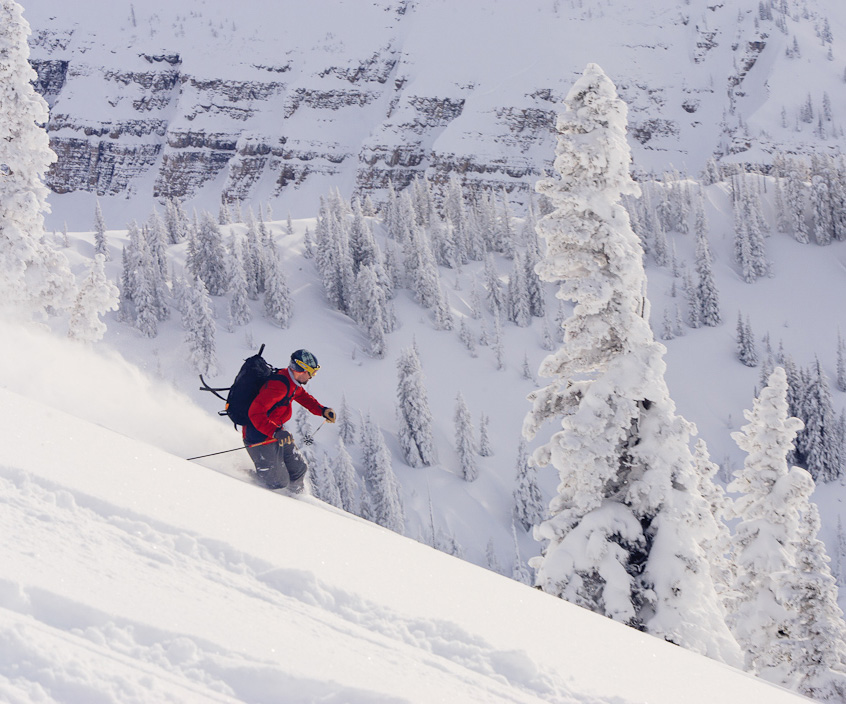 Slicing telemark turns through the fresh powder in the Idaho backcountry near the Baldy Knoll Yurt. 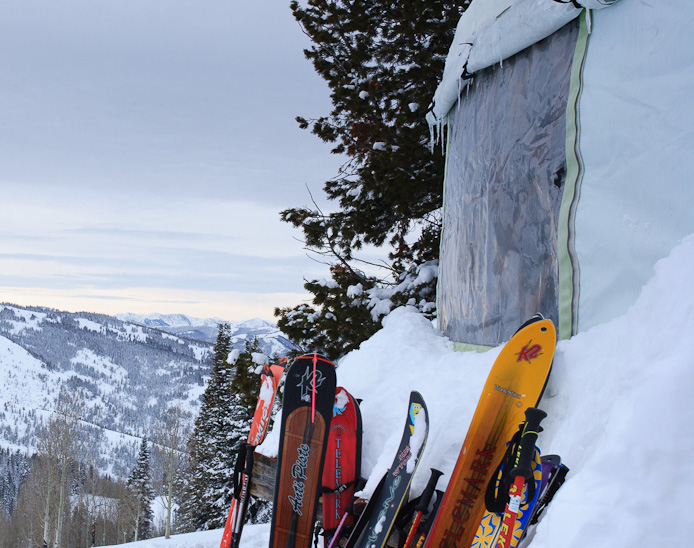