A hard wind slams windows framing the snow-raked Absarokas, as a doubtful sun rises on Christmas morning at the Yellowstone Truck Stop. In its lot, which antelope and white tail cross during summer, a dozen salt-caked tractor trailers shudder before a 60-mph gale that has closed I-90 to trucks and routed them through Livingston, Mont. It is near zero on the asphalt, but inside this café it’s toasty, and anyone bereft at spending Christmas in such a caravansary is cheered.

“What you like, darlin’?” a server asks. She is short, perky, and blessed with a Southern accent. “Pumpkin pie,” I say, festively. “And hot tea.”

The room is scaldingly bright. Sunshine kicks off the frontage snow and highlights both Christmas ornaments and the cafe’s decor, which includes a wallpaper frieze of cowboys on the trail behind sketches of cougars, mule deer, elk and covered bridges. The booths are jade-green vinyl, their tables strewn with books titled How to Confuse the Idiots in Your Life, The Joy of Being Broke, Understanding Women: A Guidebook for Guys Who Are Often Confused, and Geezerhood: What to Expect from Life Now that You’re Old As Dirt. In fact, the room is crowded with older couples, well-dressed and quietly breakfasting beside mouthy highballers in Carhartts, scruffy beards and flannel shirts, who curl around plates of ham and eggs, French toast or hot cakes as they tease the waitresses.

“You’re off tonight,” a trucker says. “Won’t you help me spend my money?”

“A Porsche would be nice.”

It is the season of giving, and my server startles me by pushing back the five I’ve offered for pie and tea. “Happy holidays,” she says, then glances up to see her husband and children arrive, dressed in matching plaid pajamas. “That’s our tradition,” she says, happily. “New pajamas, every Christmas.” She deals them menus.

I sit alone before a counter of blond Formica, unexpectedly buoyed by the cafe’s merriment. Here in summer, one is more likely to meet a row of butt cracks above scrunched Levi’s than the heavy-jacketed backsides of truckers today. “How cold is it in Helena?” one asks. “Go to Helena and see,” another says. To our right is a chalkboard itemizing this afternoon’s dinner: roast turkey, cranberry sauce, sweet potatoes, gravy, stuffing, a relish tray, soup, salad, and pumpkin pie, all for $14.95. On the counter, a flier for the convenience store reads, “Two percent milk, made-in-Montana souvenirs and gifts, great low prices on cigarettes, snuff and chew, ice cold beer.” There, one can purchase a truck stop t-shirt or idle at the casino’s gambling machines, with their $1 snack menu of “cinnamon rolls, mozzarella sticks and mini tacos,” to name a few.

My server’s family is hard at its grub, so she returns to chat. “The truckers sleep in their cabs,” she explains, “then wander in for breakfast.” She wrinkles her nose. “Some of them don’t smell too good.” A laugh. “We also get regulars from town, and couples who come in every day.” I watch a gray-haired man and woman pick gingerly at cinnamon buns. They exchange modest presents, grin. This is old age à la carte.

I order a cinnamon bun to celebrate, and my server brings it, huge and hot. “Our pastries are from Crust and Crumb,” she says. “Trish brings ‘em fresh three times a week.” The cinnamon buns are from a secret recipe. “She bakes ‘em from scratch.”

This truck stop has always delighted me. One night in 1976, a female trucker, hauling 18,000 pounds of plywood to Rapid City, stopped at the Murray Hotel bar and asked, “Any of you fools want to ride out by the Husky Station and listen to my party tapes?” I acquiesced, the tapes and subsequent breakfast a revelation. The Yellowstone then was a Husky franchise; today as a Cenex it remains linked not just to Montana’s fast fading, café culture, but to its pre-Interstate days. “This truck stop’s been here since the 1940s,” owner Carol Graybill says. “We’ve had it since 1997.” With customary amenities — fuel, showers, casino and “space for 100 trucks” — it never closes. “I don’t think we have a key to that front door,” Graybill adds. “And the restaurant stands on its own. Truckers say, ‘Stop for the Thanksgiving dinner.’ They do, but our biggest revenue is from locals.”

In the kitchen, an unshaved cook ladles biscuits and gravy, with sides of sausage patties, to a thick china platter. “I got prime rib waiting at home,” he says. Then mimics taking a drink. “We’ll do her all over again.” My server chimes, “I’ve got roast ham waiting. I work holidays, I don’t have to cook.”

The cuisine here is as close to homestyle as it gets. Dishes, such as goulash, veggies and garlic toast, cup of soup or salad, for $7.95; a hot hamburger sandwich with mashed potatoes and gravy for $6.95; and grilled cheese and potato salad, with a cup of bean-with-bacon or cream-of-celery soup, for $6.95, attract drivers like trout to salmon flies. Dinner specials might be prime rib, turkey, meat loaf, pork roast or ham. It’s comfort food — on a day like this, perfection.

A wind-rumpled couple enters, adjusts its clothes, sits by a window. The seniors are so close in appearance they seem as one. They consider the menu, order carefully, then reach across the silverware to hold hands. Outside, the wind twists ice and gravel to dust devils, but in the cafe’s warmth the shivering whiteness of the far Abasarokas seems an abstract postcard.

My server’s brood departs in their pajamas, and at the counter, an old man says, “You’re off tomorrow, aren’t you? I won’t see you until Monday.” My server nods, freshens his cup. “I’ll miss you, darlin’,” she says.

I’ll miss you, I think. The three of us smile. 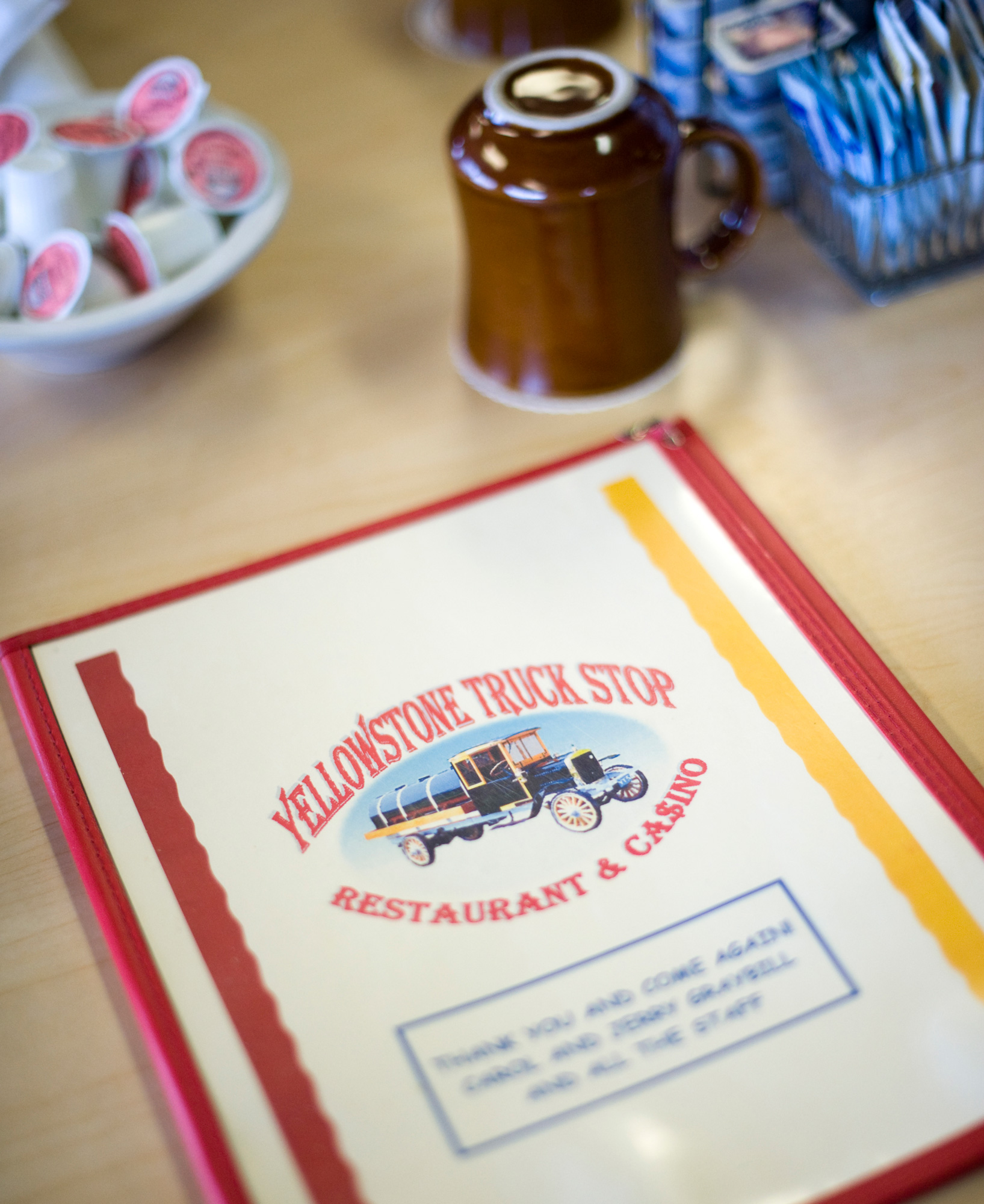 You’ll find homestyle meals in the menu such as ham and eggs for breakfast and goulash, or cup of soup for lunch or dinner. 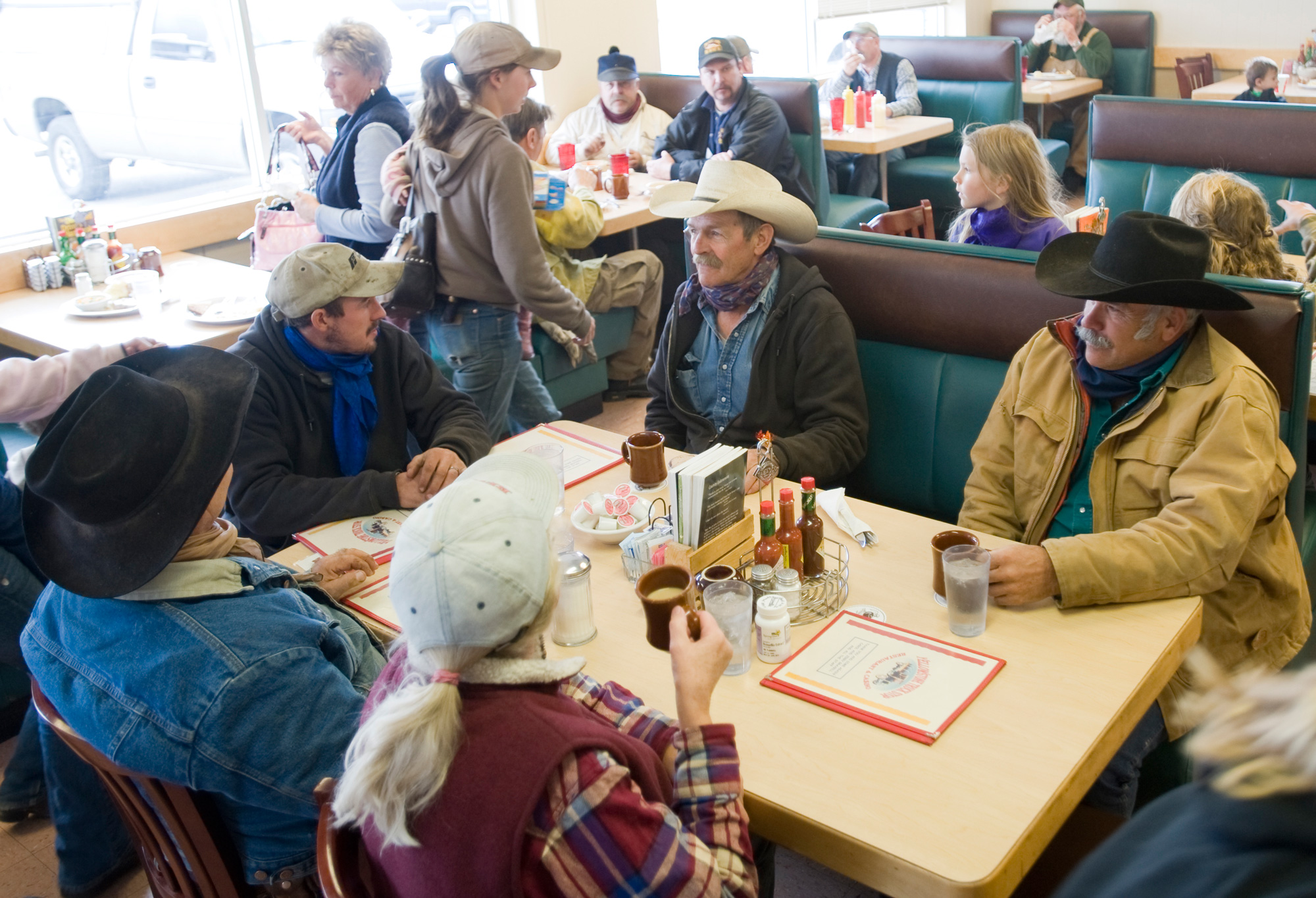 Local ranchers wait out the storm and chat over hot coffee. 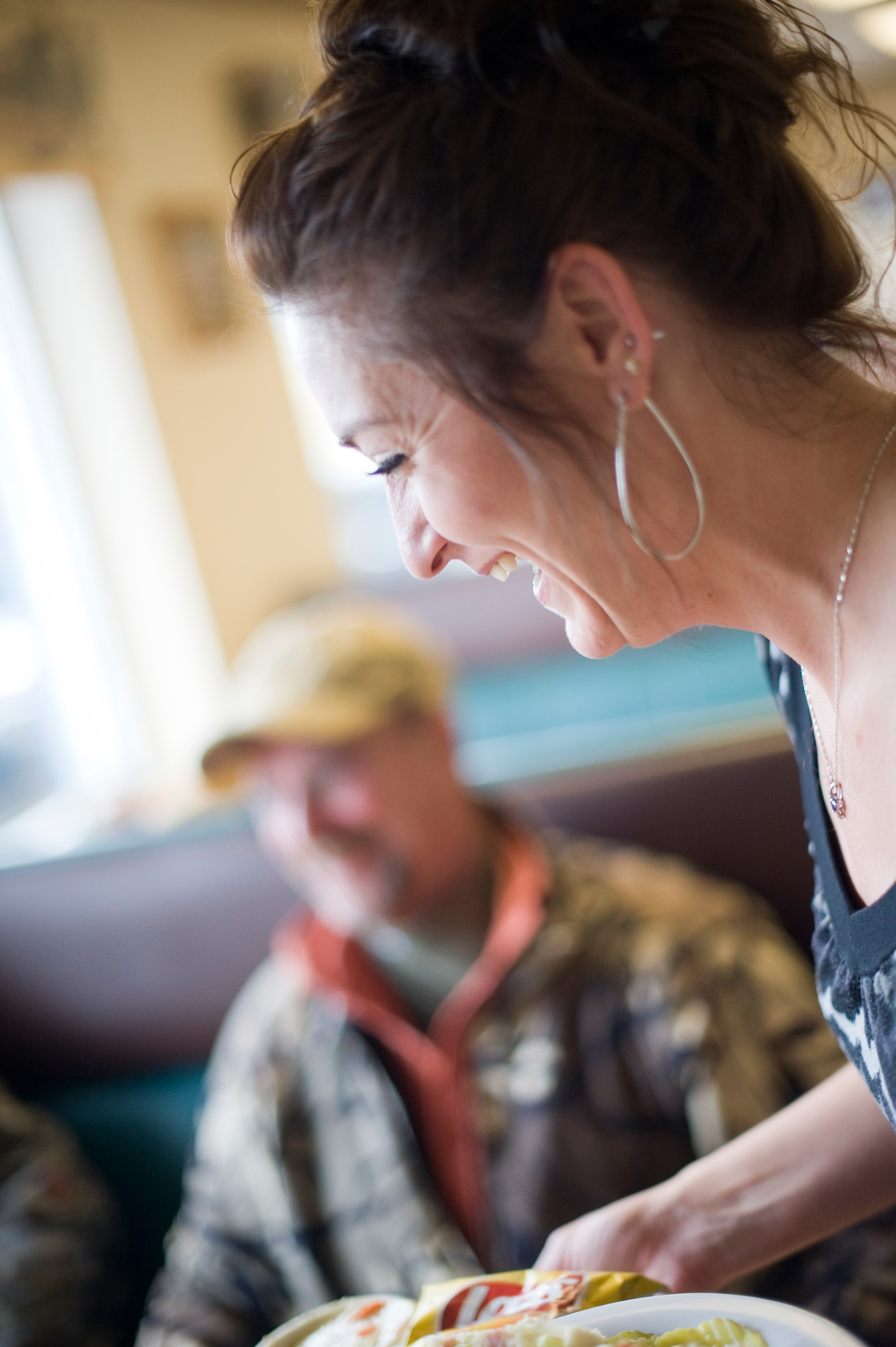 Waitress Erica serves locals from town as well as truckers from abroad with a friendly laugh and smile. 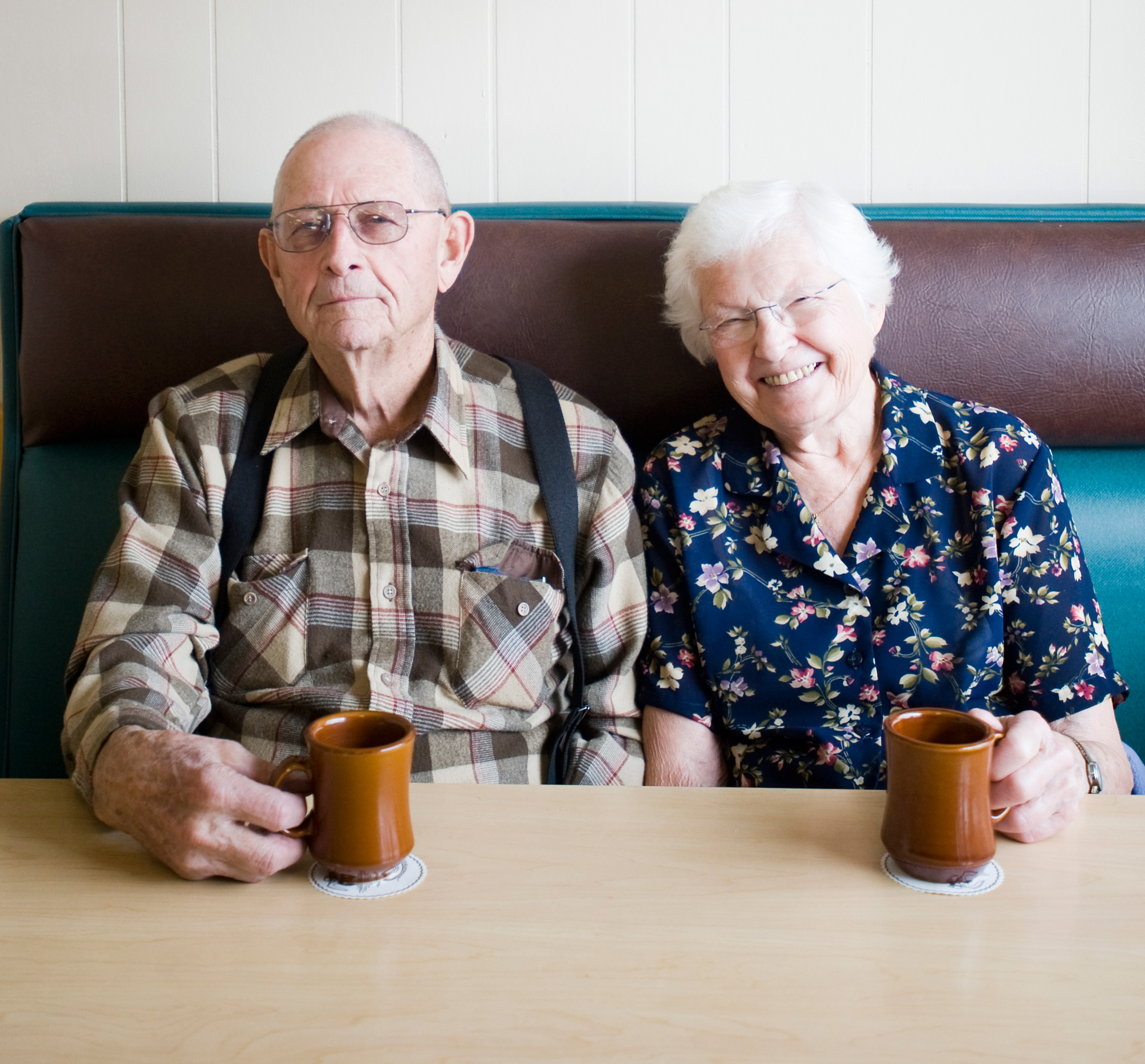 Left: Pecan pie from Crust and Crumb. • Center: Archie Mann sits at the seats of wit and wisdom. • Right: A slice of homemade Crust and Crumb pie with a hot cup of coffee.