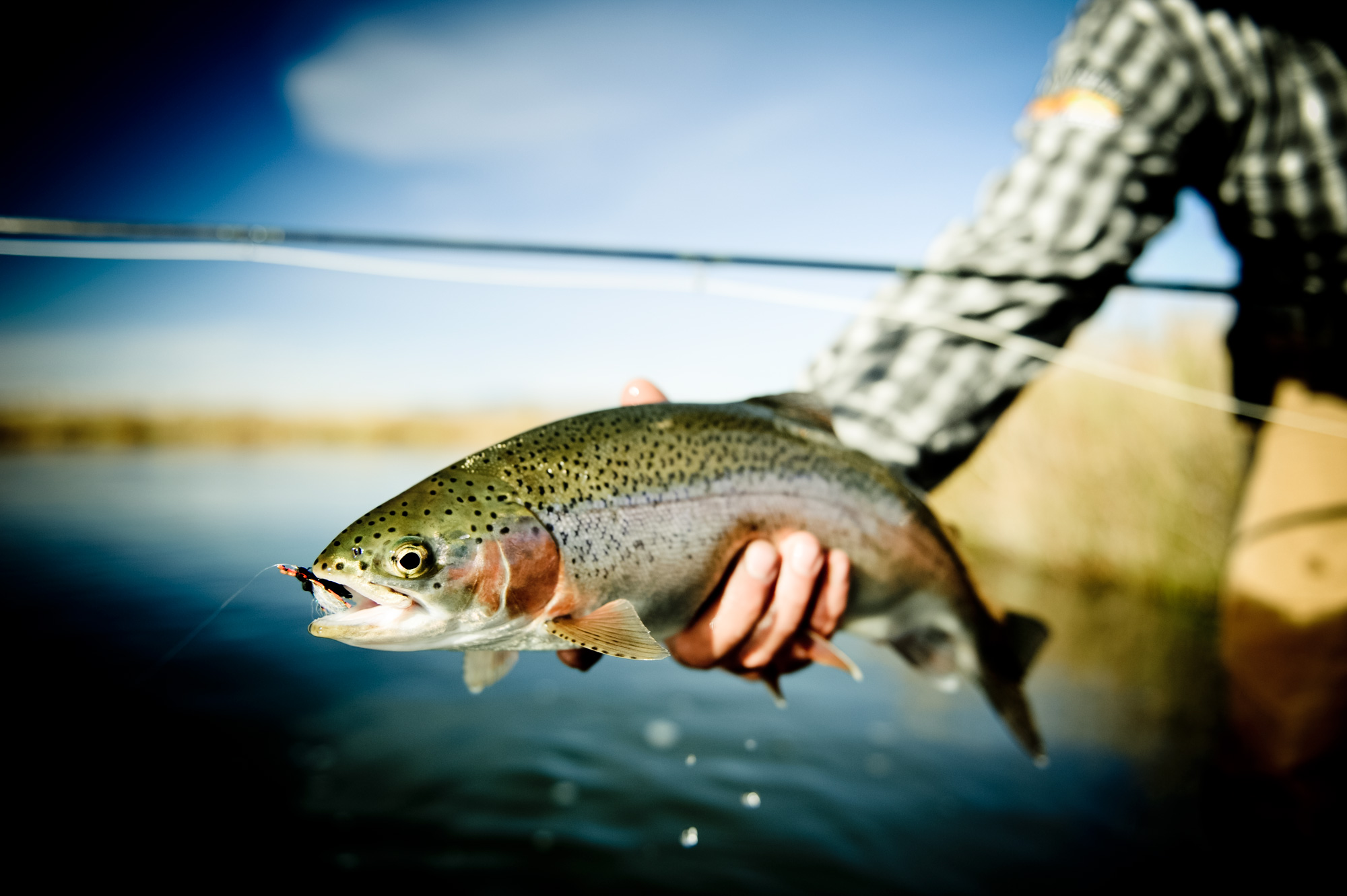 14 Jul A Stick and a String

It started out well enough, with Tony showing me the same consideration he showed novice friends when he took them fishing. He tactfully ignored lousy casts and patiently helped untangle my line from trees, kids and dog. He offered just enough advice to help me improve without making me feel like an idiot. Fly fishing was easy, he told me. You could catch a fish with a stick and a string.

And at times, I did catch fish. We fished our way through many streams rushing out of the nearby Bitterroot Mountains, where the small but beautiful Westslope cutthroats can’t take the time to evaluate your technique. I developed a rhythm: sneak up to the creek, plop in a fluffy fly, and prepare for action. Sometimes I landed fish, and sometimes I merely annoyed them. It was fun.

But halfway through the summer, something shifted and my husband began to care whether I was any good at this fishing business. Maybe it’s not his fault. He has been patrolling the Blackfoot River for 13 years in his job as a law enforcement ranger. Whatever fly-fishing blood he did not receive at birth — he’s from L.A., for goodness sake — he must have received through transfusion from the Big Blackfoot. He’s way beyond viewing fly fishing with balance and perspective.

Our fishing trips took on a tense note. “Let it drift!” he would yell at me, for perhaps the hundredth time in a morning, and then, paradoxically, “tight lines, tight lines!” How was I supposed to do both? “You’re going to lose him!”

As time went by, my almost-cooperative “yes, dear” responses were replaced by “so what” and “I don’t care.”

When our boys returned to school in the fall, my fishing improvement plan continued at an accelerated pace. They worked while we played. Tony and I discovered that, after peeling off our waders, it took exactly nine minutes to drive from our favorite fishing access on the river to the school parking lot — just in time for the final bell. Streamside trailheads took a bit longer, starting at about 20 minutes. The kids grew accustomed to being picked up several days a week by a raggedy mommy and daddy and a smelly, wet dog.

And without the kids’ safety to worry about during our fishing trips, Tony evidently felt free to risk mine. Maybe it was a compliment; he thought I could handle it. But suddenly I had to catch the fish at any cost, even if it was swirling away in a scary-deep pool at the bottom of a steep slide with treacherous footing. He would park me on a precipice high above and tell me to pull out more line and stop overreacting.

“Geez, OK then, that’s well worth risking my life.”

Apparently, fishing like a wuss falls under the heading of fishing poorly.

Tony’s strategy for gaining my cooperation on fishing trips was simple. He revealed just enough about his plans to make them sound appealing, while withholding any information that might raise objections — kind of like a personal ad. One morning we had nearly arrived at a safe and pleasant trailhead when he steered down a steep four-wheel-drive road.

“Please, no,” I said, as soon as I saw where we were going. “Anywhere but here.”

“I’ve caught some nice browns in here,” he told me.

Tony had taken me there once before, back in my non-fishing days, as part of a “where to find my body if I don’t return” orientation trip. It’s one of those places where the National Forests’ multiple use mandate has been interpreted quite broadly by the public.

The steep dirt road dead-ends at the obvious home of many a keg party. Huge fire rings are surrounded by trash: cans, bottles, discarded clothing, toilet paper, and sadly, diapers and juice boxes. Kids have to party too, I guess. Tire tracks mark many surfaces that could not be attempted while sober. During our first trip, I noted that while I would need a permit to transplant any of the wild roses struggling to survive at the party site, it might be legal for me to run over them with my SUV. I had also met a couple of tough-looking guys who left me mentally reviewing the location of the pepper spray in my pack.

But this time the site was deserted, and predictably, Tony only had eyes for the creek. The destruction stopped well short of the water’s edge, and the stream was clean and clear, with plenty of deep pockets to provide homes for fish. My resistance faded, and I grabbed my waders and fly rod.

We usually fish our way upstream to avoid spooking the fish, but this time we headed down. “Just wait until you see this place,” Tony told me. “Shangri-La.”

The water was cold, and sunlight had yet to reach the bottom of the canyon. With no fishing trails along the stream, we fought our way through birch, alder and downed spruce. We crisscrossed the creek on logs and waded through current a little too fast and deep for comfort. Our Australian Shepherd, Scout, swam nervously next to my legs, her long, mottled fur spread around her like a floating rug. Fishing was slow.

I started to dread retracing our route back up the canyon, but Tony was quick to reassure me. “We’ll just hike up to the road,” he said. “It’s right above us.”

I forgot about all that when we rounded a bend and the canyon opened up. A series of pools, enormous and sea-green, flowed past the foot of a large rock outcropping that stepped down to the water ledge-by-ledge. Here was my husband’s Shangri-La, a paradise for trout.

We tested the edges and caught a few small brookies. Then I climbed one of the huge boulders dotting the sides of the creek and peered over. This was no ordinary fishing hole; it spiraled deeply into the streambed like a chilly version of Yellowstone’s Morning Glory Pool. Tony had generously offered to let me fish it first, but my expectations were low. I was still pretty sketchy about setting the hook.

I tied on a fly that fit my main criteria: It was big enough for me to see, it floated well, and it looked realistic enough that you would be disgusted to find it in your salad. Its name escapes me.

I cast into the fast water at the head of the pool and let my fly sweep all the way to the tail, trying to “let it drift” naturally while keeping a “tight line.” Maybe I even did it right. When my fly suddenly submarined, I lifted the rod tip and tugged gently on the line; it tugged back. Two seconds later, a large rainbow launched itself in a Baby-Shamu leap and headed off in a streak. Whoa, that was obviously the biggest fish I had ever hooked. My scrawny fly rod bent into an arc, and I looked around for Tony. My fly fishing instruction had not yet progressed to the lesson on landing big fish.

My cries for help were lost in the noise of the stream; this was between me and the fish. I started the tricky descent down the boulder, already worried that I would exhaust the fish with my amateurish efforts.

I wish I could say that I rose to the challenge and patiently played the fish until it was just tired enough for me to bring it in, and then released it gently while contemplating something philosophical about life and fly fishing. But that’s not what happened. The rainbow abruptly shook off the hook while I was climbing down the rocks. No doubt it felt lucky and a little embarrassed that it had been fooled by a beginner. I felt relieved.

“Thanks, buddy. Sorry to bother you.”

Tony and I met up to share fish stories and a peanut butter sandwich before heading out. When I asked about his route to the road, he gestured vaguely overhead. Perhaps directly overhead.

I thrashed through the thick layer of thorny stuff edging the creek, crossed an old irrigation flume, and found myself at the foot of a near-vertical rockslide. The huge talus slope stretched 500 feet wide and at least that high, terminating in a broken cliff band that theoretically supported a road. This was the “easy” route I’d been looking forward to all day.

I have never liked heights, and even though the scree slope was old and lumpy, with plenty of handholds and footholds, it still made me nervous. My only strategy was to keep going, not look down, and try not to get rim-rocked. I began to sweat under my waders. The rocks shifted under my feet, and I fell with a scream. When that got no reaction, I mentioned that I had nearly broken my fly rod.

About halfway up, legs burning and lungs sucking wind, I stopped to hug a conifer stranded in the middle of the slide. A pile of bleached bones lay hay-stacked on the ledge just above me.

“Look, there’s the last fisherman crazy enough to try this. Anyone you know?”

Tony thought I was just being melodramatic. “Come on, you worked for the park service. I’m sure you’ve been on rescues on slopes worse than this one. ”

“Yeah, but think about why we were there.”

As we continued up, we found more signs of approaching “civilization” — tires, trash and anything else that could be heaved or rolled over the drop-off. I let Scout choose our route through the cliff band and scrambled after her. When I finally pulled myself over the lip of the road, I stepped aside to avoid what sounded like a car playing offensively loud hip-hop music. No car appeared, and I finally realized the sound was the beating of my heart.

My heart rate gradually returned to normal as we headed back up the road past an abandoned recliner and a small herd of deer carcasses. By the time we reached the cut-off to our truck, I was feeling pretty good. Not only had we survived; we were early.

“There is no cure for what you’ve got,” I said.

Back at the creek by the party site, we discovered that the fish had woken up during our trek down-canyon. Where it really mattered, their habitat must have still had all the basic ingredients, because nearly every pocket held a hungry fish. With a little advice, I caught several nice browns, admiring their pretty fall colors and red polka dots. I felt like I had just aced a test after flunking several important assignments. Tony said he was proud of me.

“We should have just stayed here,” he said. “There was no need to go downstream. You’d have to be crazy to fish there.”

I agreed. You’d have to be crazy. “So are you going to do it again?”

“Sure. Those are the best kind of places. ”

You’d think I would have learned a lesson from that day, maybe something about asking more pointed questions or not leaving all the trip planning to others. But mostly I learned a little bit more about catching trout. I also learned that there is something appealing about not always knowing where you’re going or what you’ll find when you get there. And if Tony is in charge of planning, there is no point in asking anyway. With him I know just one thing for sure: there will be fish. 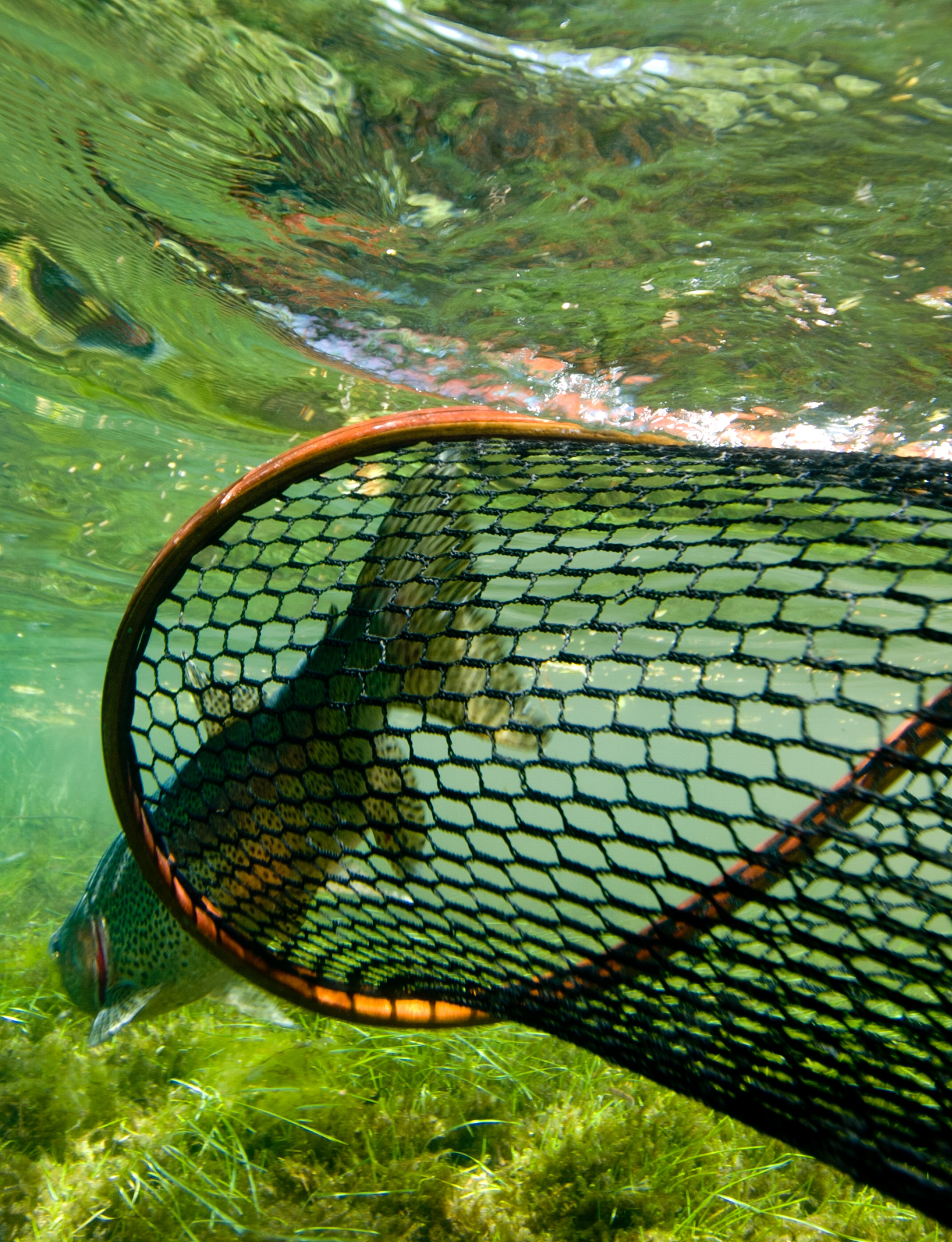 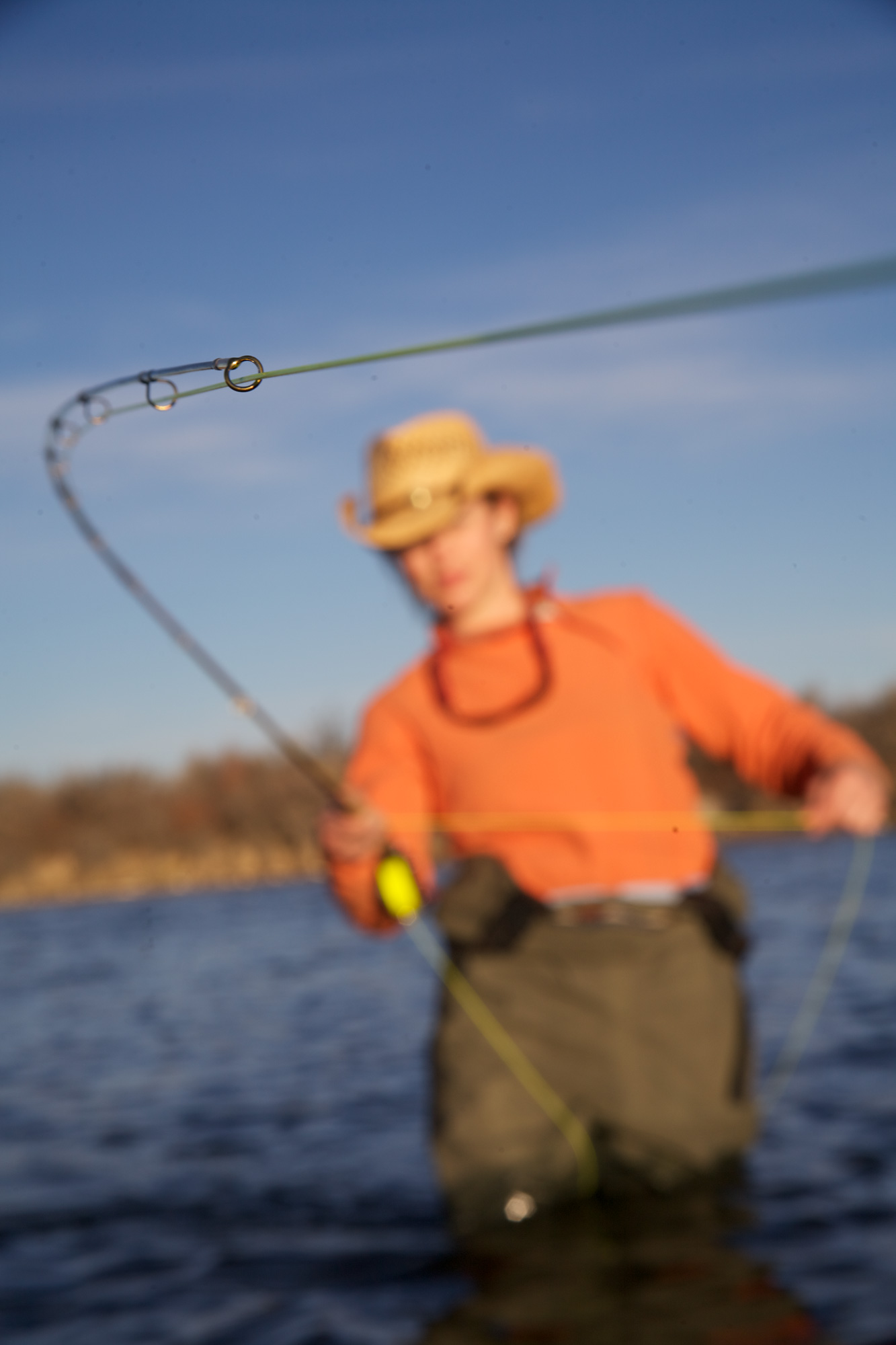 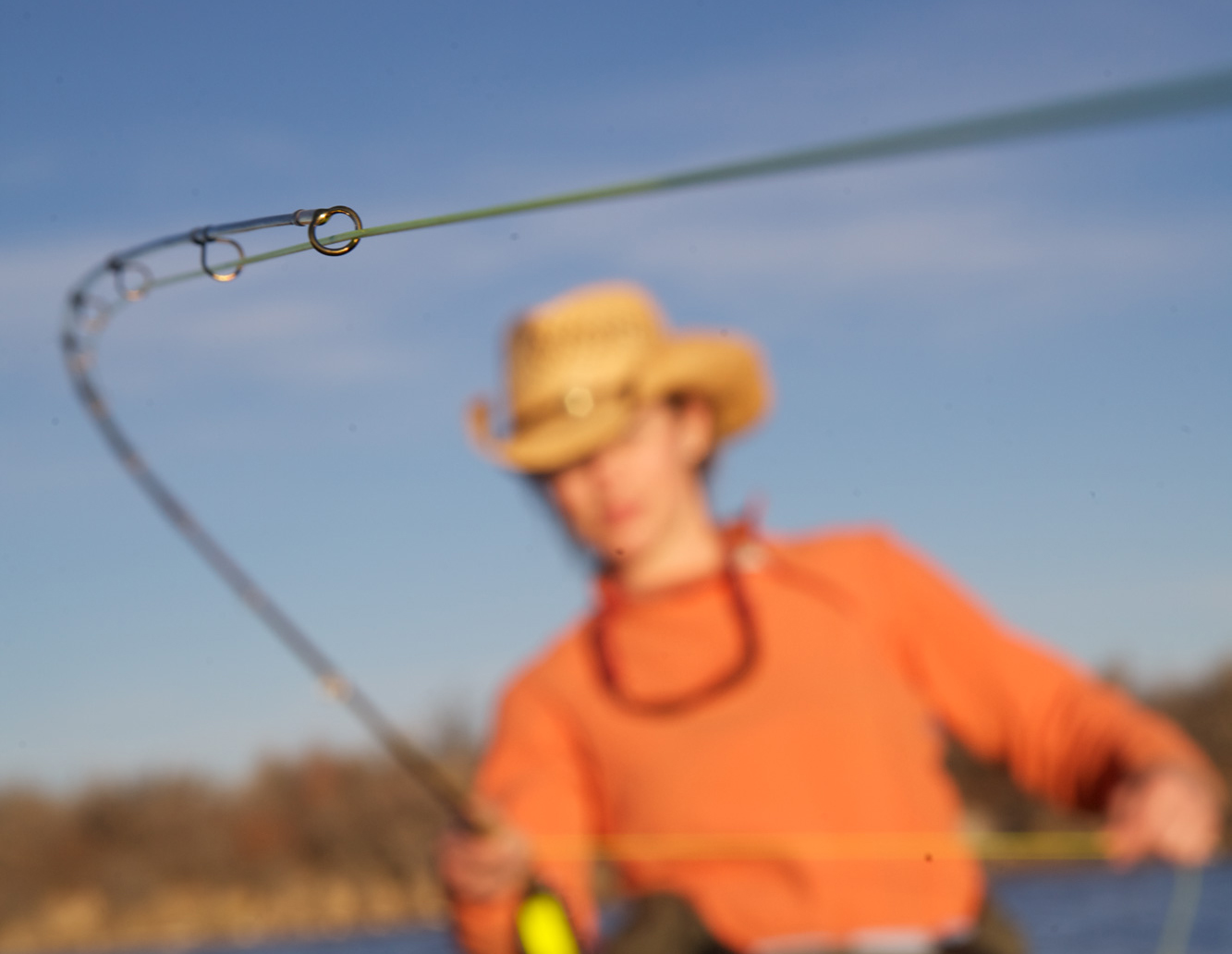