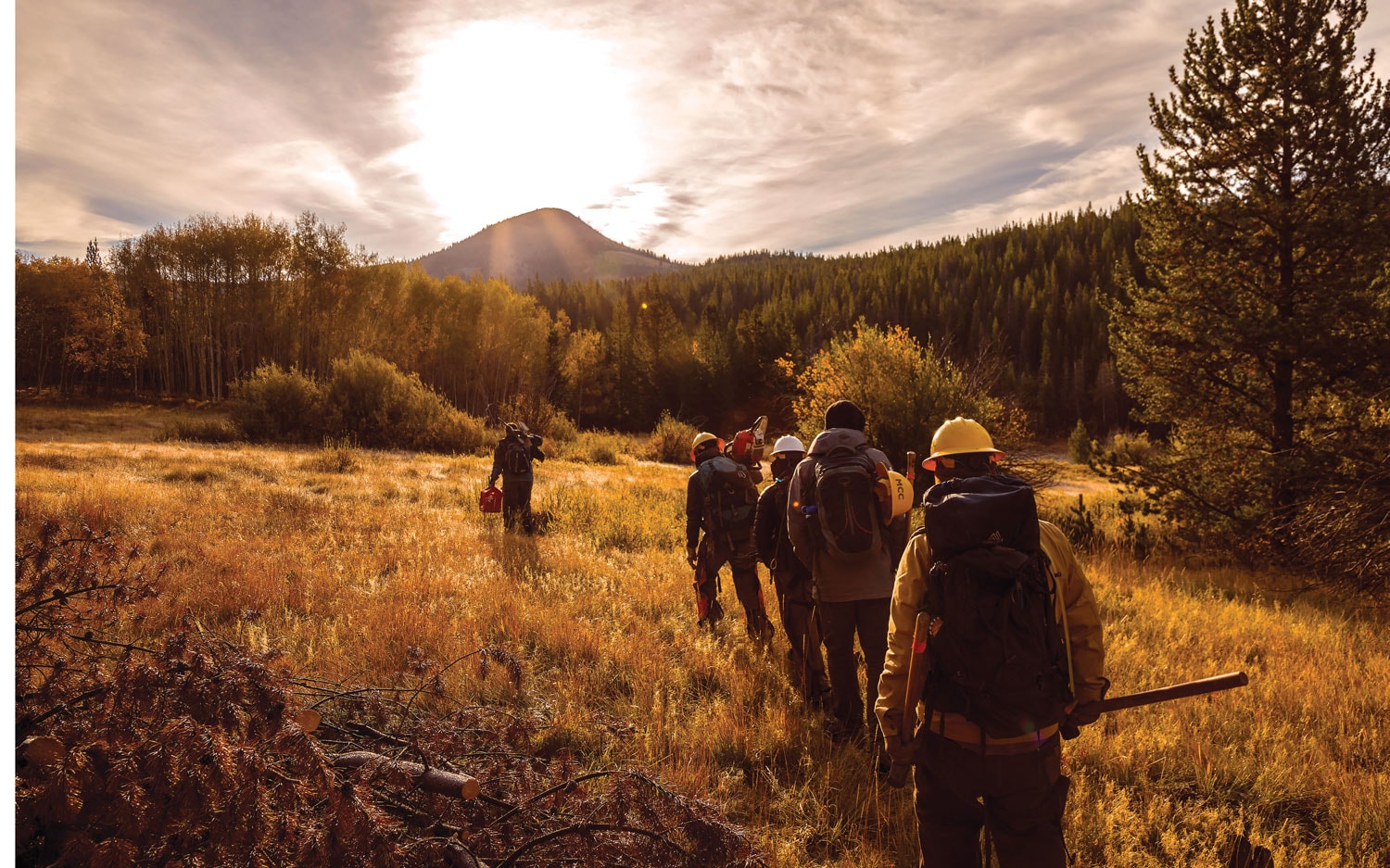 The Montana Conservation Corps takes a new direction, impacting the land, communities, and a generation of young leaders

Even with all the eroded gullies and stumps, the Mount Haggin area south of Anaconda, Montana, is staggeringly beautiful. In the fall of 2018, I joined a Montana Conservation Corps (MCC) crew that was working on restoration efforts near there. One morning as we drive down a dirt road, crew leader Kenshin Okubo tells me his story. With the aspen leaves changing color and the sun warming us through the truck windows, Okubo (who moved to the U.S. from Japan with his family at a young age) describes loving photojournalism as a kid, and majoring in it before dropping out of college with one semester left. “I was covering the Boston Marathon bombing,” he says. He explains the paradox of being in a chaotic situation and pointing a lens at it rather than helping. Soon after, Okubo came to Montana, drawn to the state for its wildness and beauty.

I have personally experienced the power that wild lands have to heal an individual’s soul, but by joining Okubo and his crew in this scarred landscape, I wanted to see if the restoration of land and person could trickle out of the mountains and flow into our communities to make a lasting impact. For decades, the Anaconda smelter, run by the Anaconda Minerals Company, pumped particulates such as arsenic into the air, which settled into the soil downwind. If you were to hike Muddy Gulch, up a steep, narrow, canyon that has been logged extensively, rise over the saddle, cross Joyner Creek, and ascend the ridge, you would see the watershed-wide effects of damage created decades ago, such as deep V-cuts where rushing water carved a channel below the traditional creek bed, deeper than willow roots can reach down to slow the runoff. Eroded ruts rake the hillside as if an enormous deity took a fork and scratched gouges in the sandy face. Logged stumps rest like tombstones with their roots exposed from years of erosion, a clear sign of how much of this hill has already been swept downstream.

The Big Hole Watershed Committee is leading restoration efforts to clean up this Superfund site above the Clark Fork and Big Hole river watersheds, within the state-owned Mount Haggin Wildlife Management Area (WMA). Imagine the impact from decades of poisoned particulates in the soil being swept off the mountainside into Joyner Creek and Muddy Gulch, down to Mill Creek, and then to the Clark Fork River, which runs through Missoula. Which is to say, what happens here really does matter.

According to Pedro Marques, restoration programs manager for the Big Hole Watershed Committee, “MCC has played an essential role for four years.” MCC crews have built hundreds of beaver check dams (imitation beaver dams designed to slow water), fertilized 10 acres of uplands, and been an essential partner in the invasive weed program in the backcountry around the Mount Haggin WMA. “There aren’t many people who will do this work in a remote backcountry setting,” he adds. While slow, progress is being made; dams that were built in the last few years are noticeably catching sediment, and the lessons learned here have led to a restoration plan that will be applied across the rest of the Superfund site. Marques brings up another reason why the MCC crew is important: “I hope that their experiences lead to careers in restoration and conservation,” he says, noting the need for more help in these areas. One might imagine Civilian Conservation Corps crews in terms of black and white photos of young men, with tools slung over shoulders, entering the forest each summer to build trails. However, when Franklin Delano Roosevelt created the corps in 1933, he expressed that the moral and spiritual value of the experience was more important than the work that was to be completed. Today, that’s truer than ever. “MCC has emphasized infusing the work experience of its crews with curriculum to develop leaders, land stewards, and engaged citizens who improve their community,” says MCC president and CEO Jono McKinney. Indeed, MCC has a national reputation for its leadership programs, and the crew members who I worked alongside expressed that as one of the main reasons they joined.

McKinney describes how MCC’s work fits the needs of a place like Montana, where public lands directly impact livelihoods, whether it’s by rebuilding the overlook trail at Grand Prismatic Spring in Yellowstone National Park or removing fence to improve deer and elk habitat in a variety of locations. However, McKinney acknowledges that they could do more. “This is a powerful experience that we do pretty well as an organization,” he says, “but we feel limited in the number of young people who are able to access our work.”

As a result, MCC programs are becoming more adaptive, focusing on internships that combine community education and engagement, and providing opportunities to youth as young as middle school students. Historically, the organization has struggled to recruit Montana residents, so they’re ramping up their in-state outreach. And acknowledging trends that over time have shown that the conservation movement is primarily made up of white, upper-class citizens, MCC is prioritizing equality and diversity at the forefront of its recruiting efforts. “If our mission is to create engaged citizens in a democratic society, we believe there is greater value in learning to work with people who are different from yourself than people who are like you,” says McKinney. Crew member Gus Buckman credits the MCC for a life- changing experience, and hopes to eventually work for the Forest Service.

The MCC is working to connect with Native American communities in Montana in a way that allows them to create their own leadership programs instead of being handed something. MCC has also started programs for veterans and organized a women’s firefighting crew.

During my own short time with MCC, crew members often described their individual leadership training and how it taught them to thrive in challenging situations among people with different backgrounds, personalities, and values. “We provide transformative experiences,” McKinney says, “and we hear again and again from former crew members that their MCC experience is a defining one in their lives, not just in terms of what they wanted to do, but who they were. When people leave with a sense of hope and purpose, we’ve been successful.”

On my second day in the field, as the frost thaws on the meadow grass, I help crew member Gus Buckman while he works on a check dam. Buckman is from Missoula, and we chat as he crouches in a deep creek cut through the meadow. Okubo chainsaws 2-foot-long stakes from a lodgepole pine, and Buckman hammers them vertically into the streambed. I step down into the channel to help him wrap branches around the stakes. It will act as a strainer that lets water through while trapping soil, ultimately preventing erosion.

Buckman tells me about how he had dropped out of school because he didn’t know where it was going to lead. He moved home to Missoula and took a part-time job as a janitor. He had a single window in his workplace pointing toward mountains that seemed so distant. He was lost and depressed, and his mother suggested that he look for something else, something more meaningful.

Buckman joined the MCC for the summer, although he wasn’t sure how it would go. He didn’t know if he had what it took to work in the mountains, and the unknown people he’d work with fed his trepidation. Now, with the season almost over, Buckman explains that his life has been transformed. He says he’s in better shape, the crew members from outside Montana, who are very different from him, have become friends and supportive peers, and he’s enjoyed the work. He wants to be a crew leader next year, and then pursue a career in the Forest Service. “I don’t mean to sound cheesy,” Buckman says, “but this summer has saved my life.” The MCC crew takes a minute to enjoy the view after a full day of work.

This was a common theme; others came to Montana with a yearning to do more with their lives. Now that their five-and-a-half month service terms were almost up, they expressed confidence that this experience had given them the foundation to be happy, and to make a difference in others’ lives.

I couldn’t help but notice the impact of Okubo’s leadership on the crew’s experience. I witnessed him supportively hugging a crew member during a midafternoon break, giving Buckman advice on where to place rocks, and working alongside as they placed logs. I contemplate how hard his decision to leave Boston five years ago must have been, and how far he’s come to get here, in the middle of a meadow in Montana, leading young adults as they build restorative structures that will improve the quality of the landscape, water, and livelihood of others.

I asked Okubo if it was a hard decision to leave school. “Not really,” he said. “I wasn’t happy, and if I want to, I can always go back.”

I, too, dropped out of school when I was younger, and it sent me into a tailspin of depression, uncertainty, and destructive behavior. I was impressed by Okubo’s comfort with his decision; making this world better seems to be a good fit.

On my last morning with the MCC crew, they were preparing to plant native seeds on a starkly beautiful, stump-lined ridge at the very top of the watershed. It was by far the most stunning morning we’d had, with views of the big blue sky and mountains in every direction. McKinney had described to me the power of the transformative experiences that MCC provides, but what I saw had just as much to do with the raw force of our wild places. I watched Okubo smile as he and a fellow crew member rolled netting to protect the seeds from the wind. Thinking of where Okubo and Buckman came from to get to this place, I couldn’t help but be reminded of the positive potency of our public lands — no matter how degraded they may be — to not only bring joy to recreationalists and economic viability to communities, but also to provide the opportunity for restoration of us as humans when we need healing.

Okubo tells me that he’s working on becoming a U.S. citizen (he currently has a green card). “You need to be a citizen to work for the federal government,” he says. I ask what he wants to be when he “grows up.” He says he would like to fight forest fires, but he hopes to move up in the ranks there and work in the field while doing more to connect with people and communities in beautiful places like this.

As I sit on a ridge that feels like the top of the world and watch five young adults prepare to plant seeds that will grow and hold this soil in place, I see a bright future for this Superfund landscape, however long that may take. Mostly I feel hope for what Okubo, Buckman, and crews serving elsewhere for the MCC will take from here and how it will impact whatever is next on their horizons.