For the Childrey Family, building a home out West meant being good stewards of the land. Bill and Elizabeth Childrey recognized that the older buildings on their newly-purchased property along the Big Hole River had a history worth preserving.

“Somebody’s blood, sweat and tears went into chopping down those logs when they built here,” Elizabeth said, explaining that her neighbor’s grandfather once owned the property. “Our neighbors remember playing here as kids, and they appreciate that we’ve kept the general feel instead of coming in and putting up some big power home. And it was just about being good stewards of the land and of this old stuff.”

Instead of tearing down the old homestead, which needed quite a bit of work, they hired Intrinsik Architecture, a Bozeman, Montana-based firm, to restore the old barn, cabin and granary. The Childreys lived there for 10 years during their summer visits to Montana from Richmond, Virginia. It wasn’t until 2006, when they hired Intrinsik to design plans for a new primary residence as their summer getaway.

Their property straddles Burma Road at Notch Bottom, at a point where the Big Hole River carves its way through high-desert plateaus, creating a narrow corridor. The Notch is a threshold for people passing down the road. It has stories to tell, from Lewis and Clark who stood on the hillside near their home 200 years ago, to Charles Kuralt, the journalist who traveled Burma Road, naming it as one of his favorites from his CBS series, “On the Road.” There are stories of anglers wading to retrieve large browns from inside seams, and of a mother and baby moose that frequently graze near their pond. The Childreys can even ride horses to a dinosaur fossil embedded in the rock a few miles away.

Initially they thought they’d build their new residence on the river, but reconsidered after realizing that the notch was a pathway for wildlife. One day, while chasing a horse that broke free from the barn, they climbed the hillside west of their homestead and thought that, if possible, this would be the perfect site.

Built by Vigilante Construction out of Sheridan, Montana, the home is perched to overlook the river and the distant Pilgrim Mountains. “Bringing giant excavators up there to dig [a foundation] was one of the biggest challenges, because it’s just rock everywhere,” said Henri Foch, project manager, noting that Intrinsik worked with Beaudette Consulting Engineers and TD&H Engineering to ensure the stability of the site.

The inspiration for the 2,200-square-foot home was to design a building that felt like it belonged to the place, explained Dan Harding, founder of Intrinsik and formerly the principal designer. Timber cribbing and the patina of the weathered wood and stone used throughout the home are reminiscent of the mining culture found about an hour north in Butte, and the use of natural materials ties into the landscape.

A majority of the home’s wood and stone was sourced from the homestead, neighboring properties or found in reclaimed lumberyards. Beams from a neighbor’s cowshed were incorporated, along with leftover rock from a neighboring residence. They also used wood from an old sheep barn on the property. “Some of this reclaimed wood is hard to find, but we found it right down the road,” Bill said.

“It would be very rare to find two people that were as hands-on as Bill and Elizabeth. They were physically working on the home, and were resourceful in finding those materials instead of carting them in from some barn in the Midwest,” Foch said. “The materials that were used here, were already here.”

As new materials were found, the design of the house changed to include them. “We were very inspired by things we would find … and because of that, the house speaks as much about its process as some preconceived idea,” Harding said. “[At Intrinsik] we really want each project to be artistically unique, and one way to do that is to make sure we don’t go in with hard, preconceived notions. Instead, we go in and work with people.”

The end result is what the Childreys had hoped for: They’ve built a home that is warm, has character and is tied to the place. There’s plenty of land for Elizabeth to go horseback riding and for Bill to fish. The old homestead is now a retreat for guests. And they are amazed by the wildlife near the river. Being good stewards of the land has contributed to their experiences of the people, landscape and materials found in Montana. 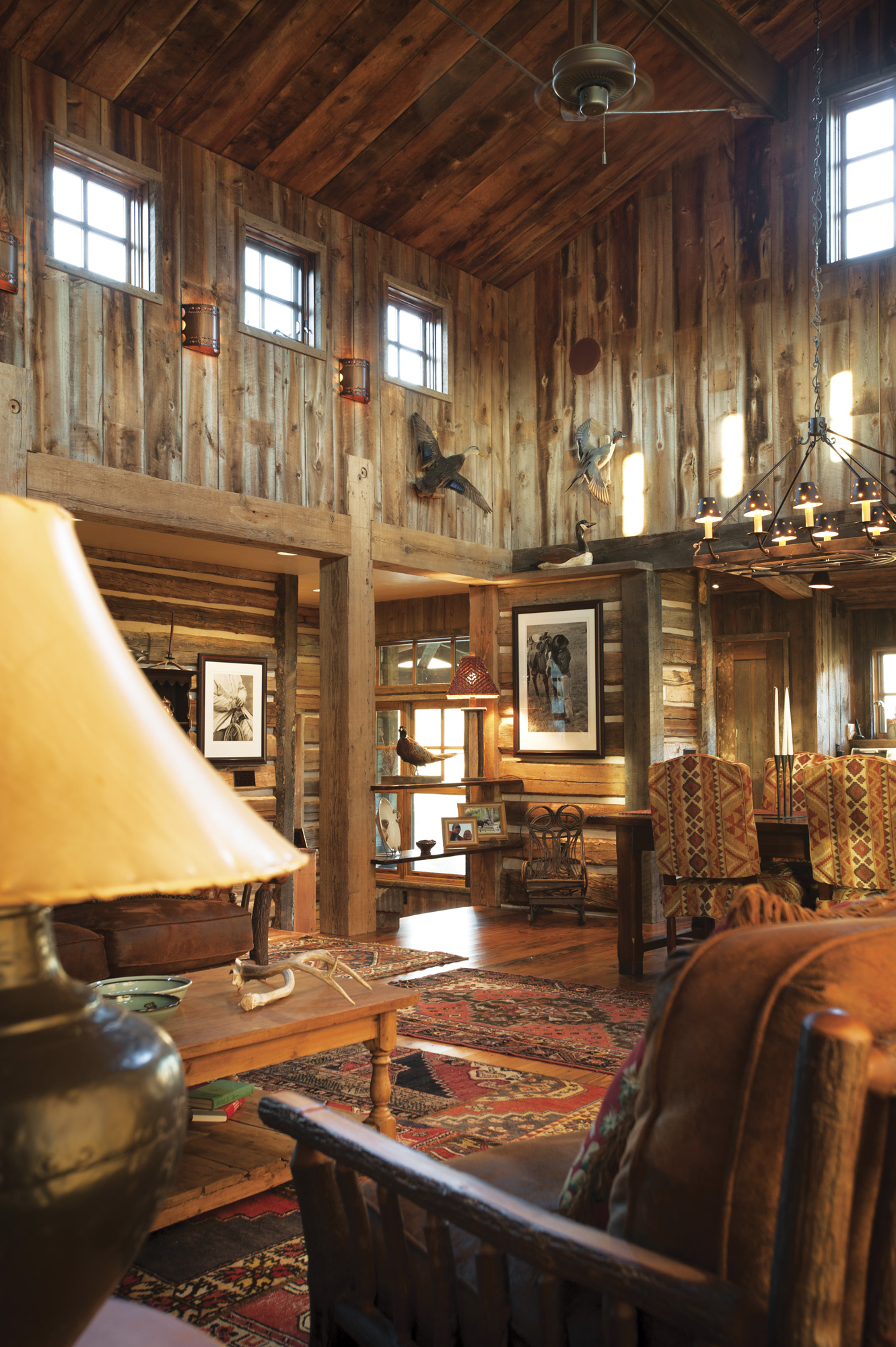 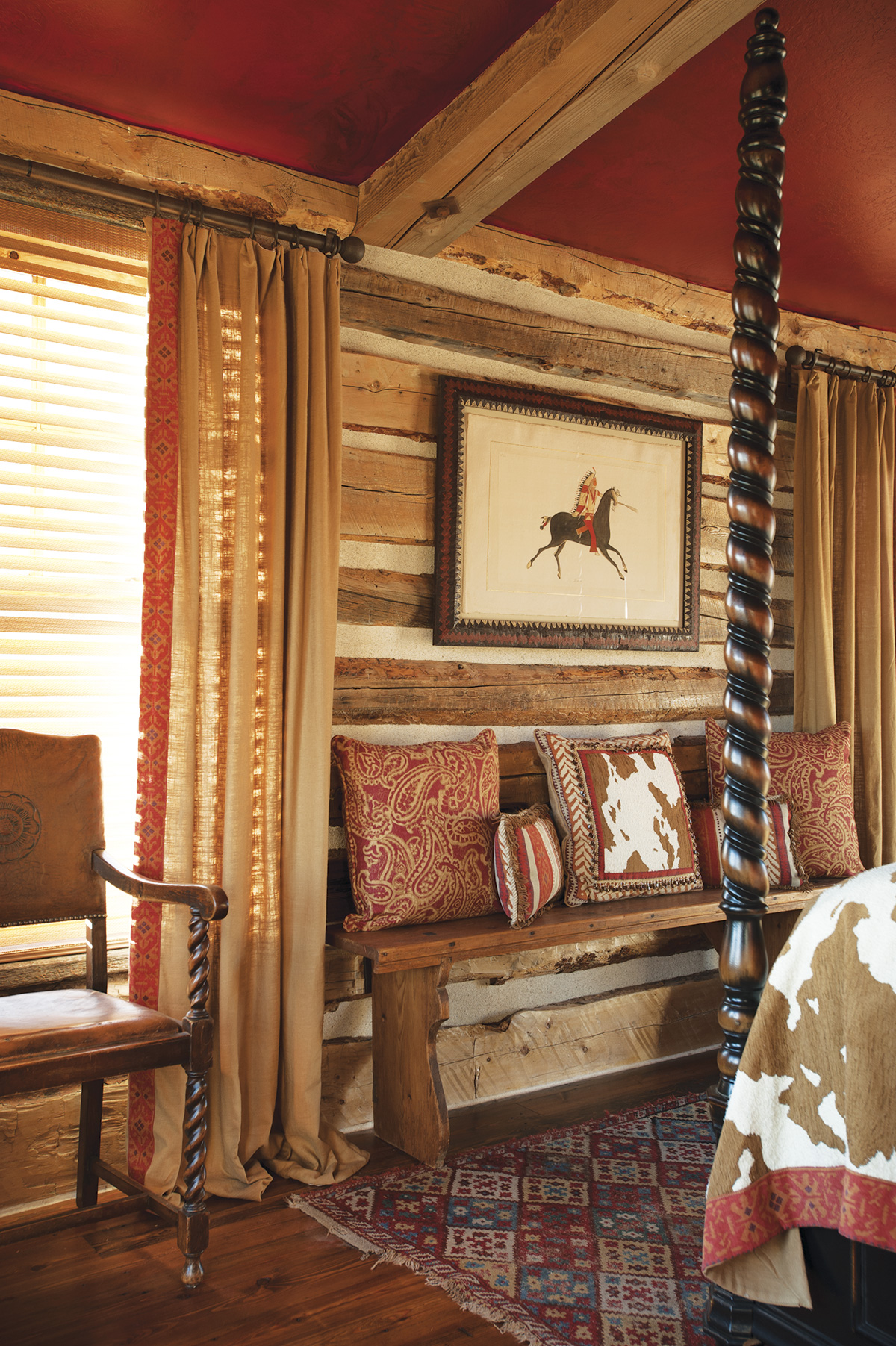 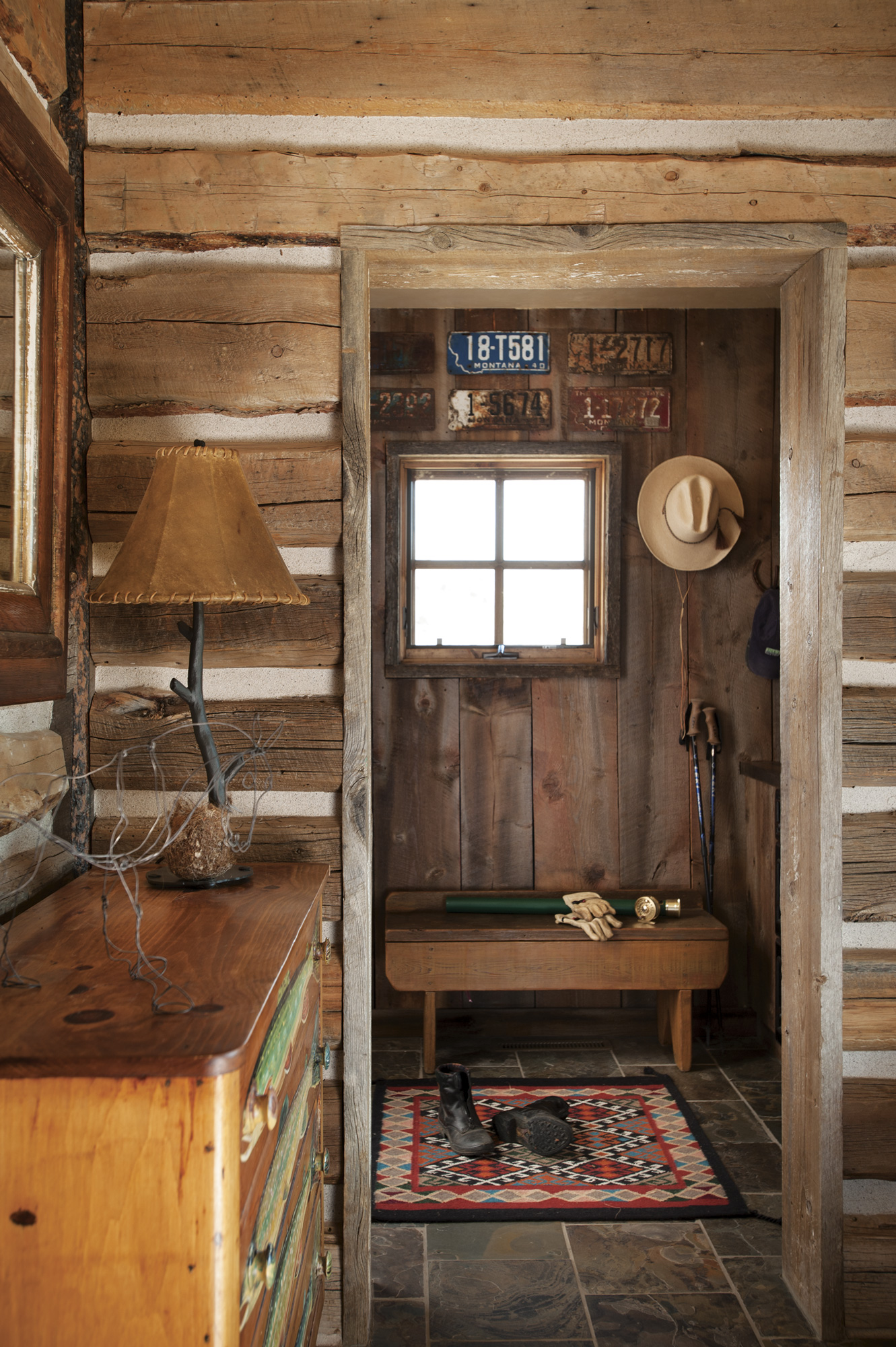 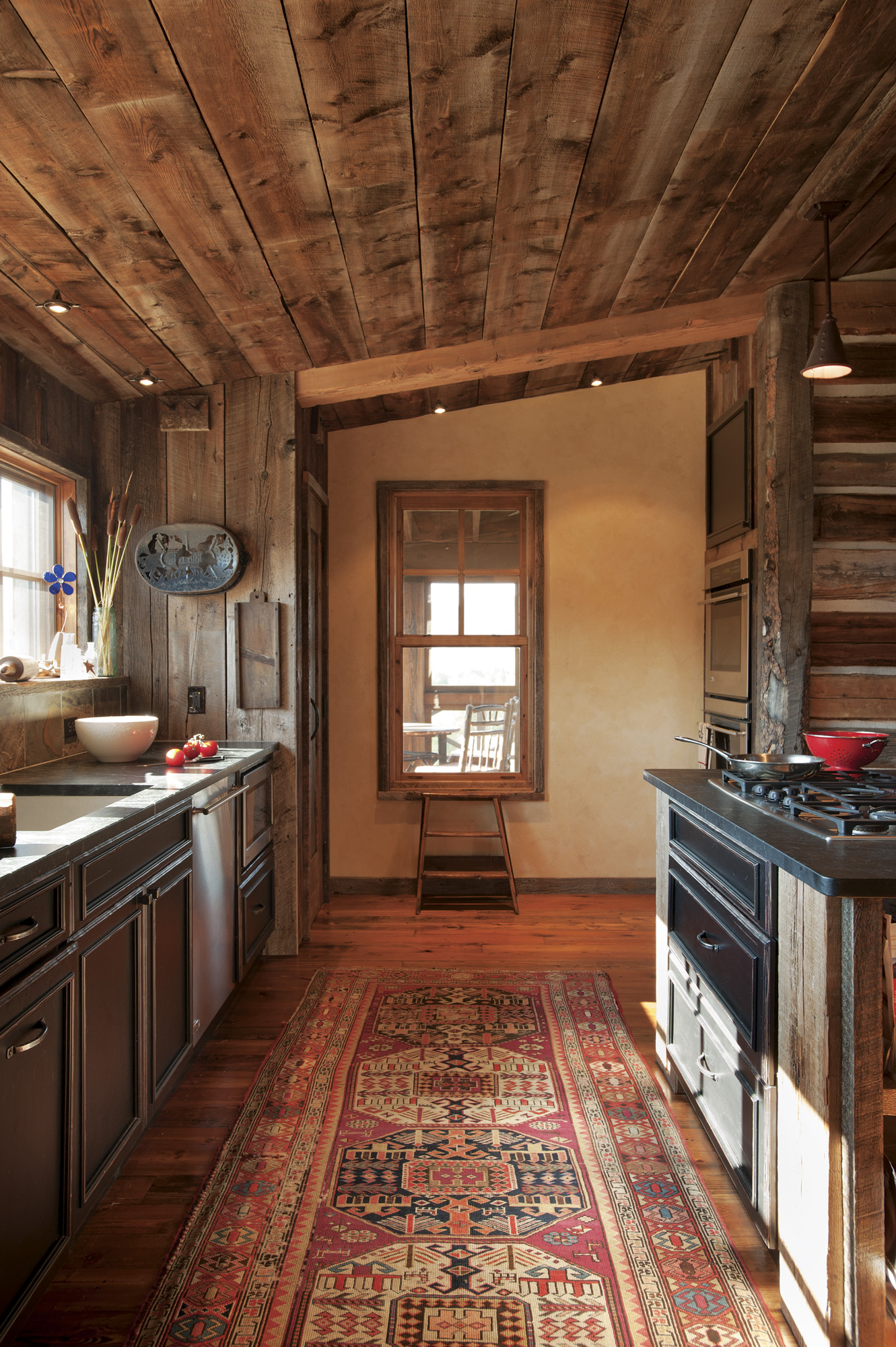 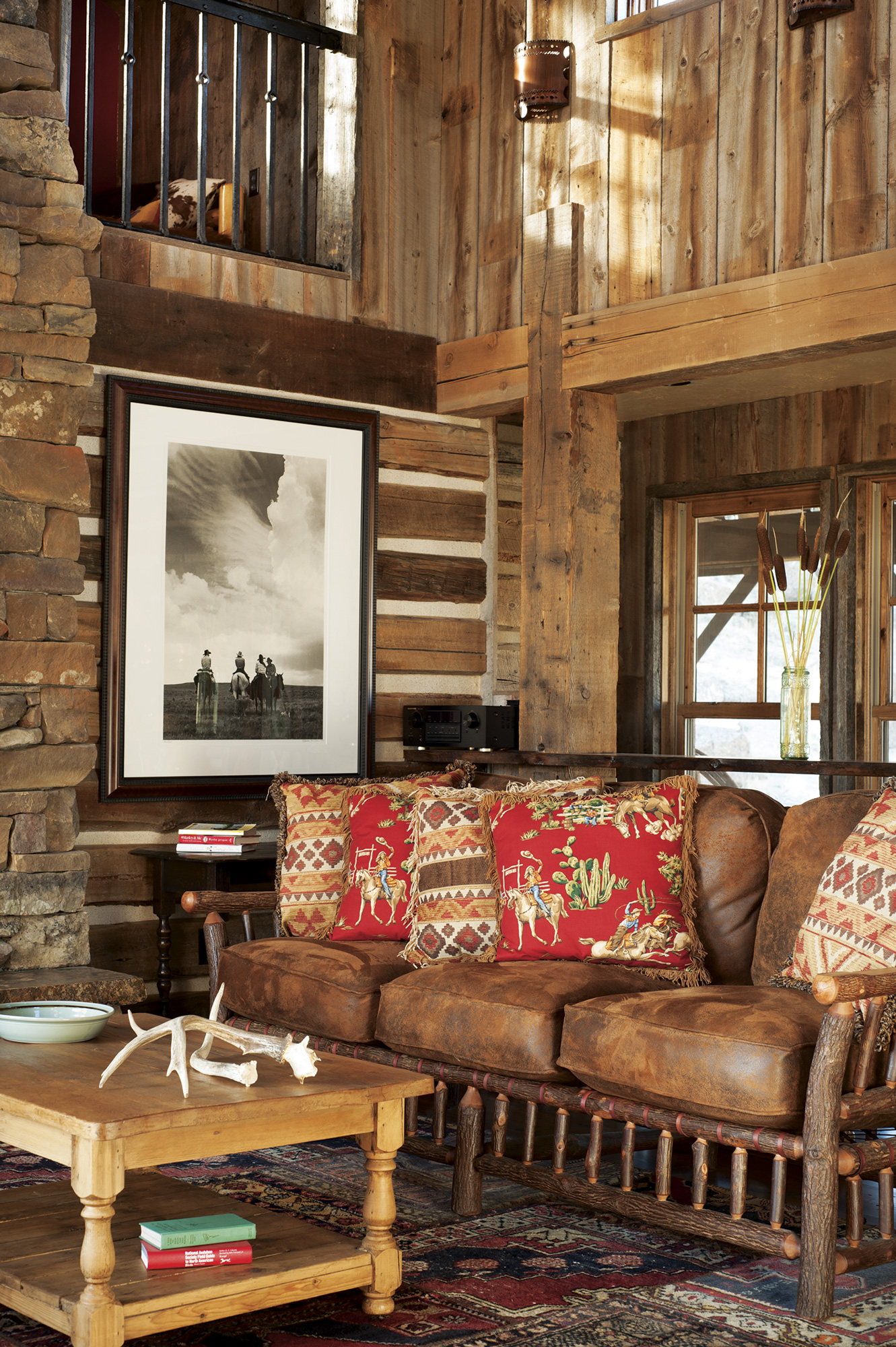 Perched on a high desert hillside, the Childrey residence is made of bits and pieces of history, collected from buildings surrounding their property or sourced from reclaimed lumberyards such as the Rustic Wood Hub in Belgrade, Montana, or Montana Reclaim

primary challenge of building the Childrey residence was insuring that the site was secure. Intrinsik Architecture worked with Beaudette Consultiang Engineers for structural soundness and TD&H Engineering for surveying and geotechnical engineering service