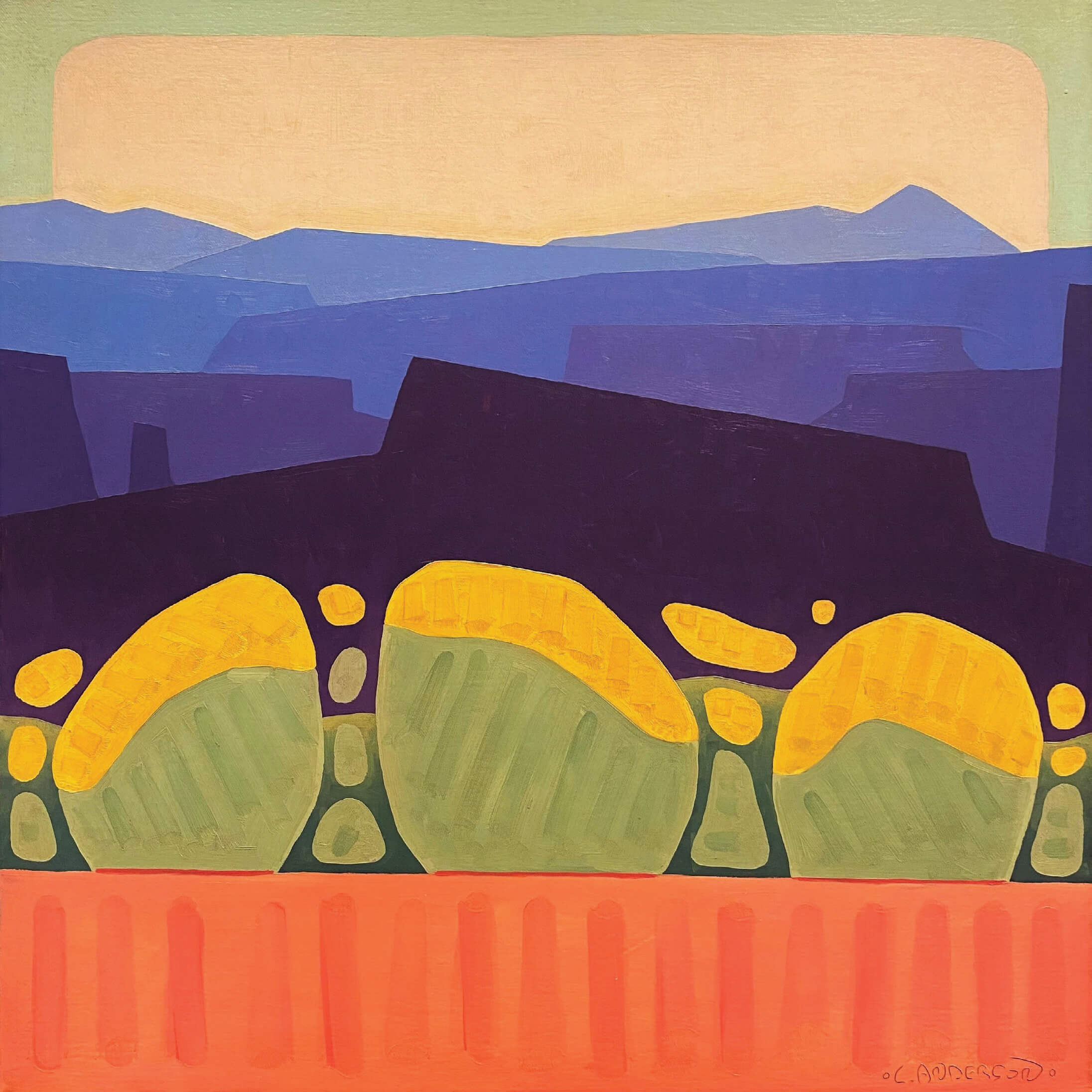 09 Aug A Place of Tension

“The West” has a broad range of definitions, depending on who you’re talking to. For painter Luke Anderson, it’s a place of tension, with an identity that extends well beyond any cliches established by old Hollywood movies.

As an artist who’s chosen this region as his subject, Anderson explains that he was initially drawn to the “aesthetic West” — the place known for its natural beauty, wide-open horizons, wild animals, and landscapes filled with grandeur. But he’s quick to add that “the West is also a land of very unique complexity.” 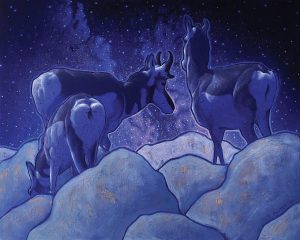 Perhaps that complexity is due to the fact that the West is and always has been evolving. “It’s at the meeting point of a lot of different cultures and ways of thinking,” Anderson says, “and it’s been, at the same time, at the forefront of technological innovation and a hub for tradition and romanticism. So I think it’s this very odd place of tension, and there’s a pull between future and past. And I think that’s a lot of what we are trying to do as Western artists, is trying to figure out what that spectrum is, where we land on it, and how we feel about that.”

Anderson’s impression of the West was informed by his upbringing in Wyoming, where he lived for 25 years before moving to Salt Lake City, Utah, in 2019. “Traditional Western subject matter — the landscape, the culture, the identity — that was constantly around me as I was growing up and becoming a human. So it’s pretty essential, not just to my art, but to who I am as a person,” he says. 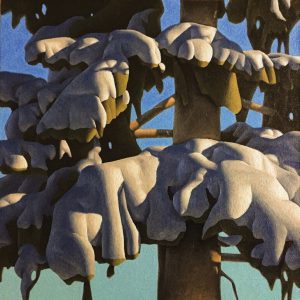 Born and raised in Cheyenne, Anderson attended the University of Wyoming, where he earned bachelor’s degrees in American and environmental studies. In college, he was interested in historic preservation, with a focus on cultural resources and sustainability. “I was constantly looking at built and natural environments and where those converge with social and cultural issues. And so, I think that was always in the back of my mind, building up these visions and perceptions of what the region I grew up in was. And I think, as I delve deeper into painting, those definitely inform what I am doing now,” Anderson says. 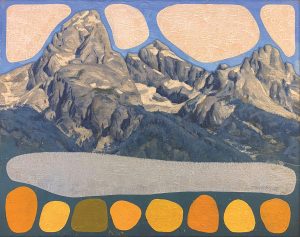 His artwork explores the themes of wildlife ecology and management, public lands, growing urbanization, and broader Western symbolism. He’s exhibited work at the Nicolaysen Art Museum in Casper, Wyoming, and the Springville Art Museum in Springville, Utah. And he won an award for best oil painting at the 2020 Western Spirit, a juried art show that takes place each spring at the Old West Museum in Cheyenne.

As a painter, Anderson focuses on technical soundness, and he emphasizes the importance of composition, texture, and color balance. “The process, in a way, has developed around creating a refined and highly craftsman-like end product,” he says. 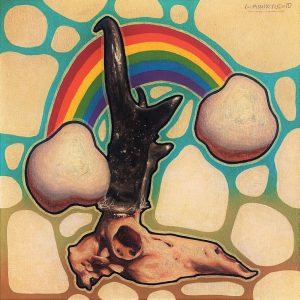 Anderson layers paint at different opacities to create depth in his work. He’ll apply thin, nearly transparent volumes or thick, dense layers that he’ll then remove with sandpaper or steel wool to reveal the paint below. “I tend to use a combination of warm colors underneath that have the dual purpose of giving the cool colors on top more vibrancy because they play against the sienna, red-orange underpainting,” he explains. “And they also reinforce the warm colors in the final layer as well. In the past, I’ve done a bright green underpainting for a reddish object, working with these complementary relationships.”

This layering process also allows the artist to build complex and subtle texture into his work and to be “a little bit more expressive and free in what I’m doing because I’m not tied to or married to a particular layer of paint,” Anderson says. “Whereas in the past, if it wasn’t perfect, I had to fix it or live with it. This way, it allows me to make dramatic changes to a painting, and a couple of years ago, I never would have considered doing that.” 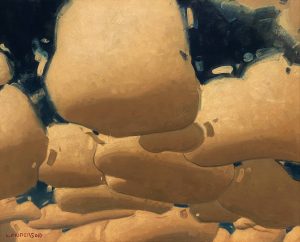 A turning point in the artist’s career was discovering the Taos Society of Artists, which “opened up my eyes to what painting could be.” He was inspired by the artists’ boldness, color choices, and forms, and founding member William Herbert Dunton, in particular, was a major influence due to his complex compositional structures. Other influences include Vincent van Gogh, and newer innovations, such as Pixar animation, which informs his style of being “expressive and loose in my rendering of a subject itself, but then that subject is contained in a tightly organized and rigid environment,” the artist explains. “It all comes down to creating an engaging tension.”

Nikki Todd, director at Visions West Contemporary, which represents Anderson, says that his work is original in its style but also reminds her of the Taos Society of Artists painters E. Martin Hennings, Walter Ufer, and Dunton. “I think there’s something about the shapes, how he shapes the landscape and his horses, something about it that recalls those artists for me,” Todd says. “He’s taking cues from past artists but making them his own, that’s what caught my eye. He has a fresh, interesting voice, and I think everything is so well-crafted too. And he’s just very thoughtful about what he paints and how he is painting.” 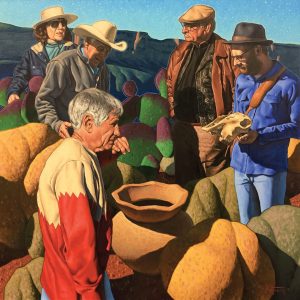 Anderson’s future goals include a desire to advance his skills as a technical painter, allowing him to better express his ideas about the West. “All of my favorite artists are ones who made me either think about something in a different way or just see the world in a different way,” he says. “I think that’s true among artists in any medium: visual art, or music, or theater, dance, whatever it is. I think that artists should be observers and translators, and that can be everything from creating a strong statement for social justice to just making the beauty of nature more accessible to people, or bringing it into our own homes, or helping us see that beauty in a way we haven’t thought of before.” 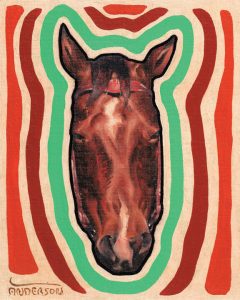 Anderson’s work is represented by Visions West Contemporary in Bozeman, Montana, and Denver, Colorado; and Meyer Gallery in Park City, Utah. This September, he will be part of a two-person show at the online Western Gallery, and in January 2022, his work will be in the Coors Western Art Exhibit & Sale in Denver, Colorado.