IT FINALLY AND IRREVOCABLY occured to me, on a recent day by a mountain lake when the wind played tag with shore birds and the water bobbed with mergansers and avocets fluttered like confetti in the sky, that I couldn’t stand it any more: I needed to see a loon.

I’d wanted to find one for years, and on this day, on the banks of a loon lake with the Mission Mountains in the backdrop, I could no longer pretend passion for the pileated woodpeckers and the red-breasted nuthatches darting in the pines. Nothing but a loon would do. Most of my life I’ve lived in places where you couldn’t find loons, not the bird variety anyway, and since moving to Montana I’d never seen the creatures and only once heard their wolf-howl wail: It was on a camping trip in Glacier and the sound made my arm hair stand on end. And yet I’d still not heard a loon’s yodel or haunting laugh (scientifically known as a tremelo). I’d never laid eyes on the red-eyed, black-headed Gavia Immer; the desire in me lingered like a song that bumps in your brain, a mantra that’s started to stutter. And now, or so I imagined, I was as close as I could be to the object of my desire: I was lake-hopping with Lynn Kelly, the “Loon Lady of Montana,” president of the Montana Loon Society and a woman who makes it her life work to protect the birds so that boaters, hikers, developers and other threats don’t decimate the species.

“We’re really hoping a pair decides to nest here,” Kelly says, binoculars to her eyes. She is an outgoing, energetic woman with a master’s degree in wildlife management and a ready laugh — I can’t help but wonder if, like pet owners, she’s taken on some of the attributes of her beloveds — and we are stationed in the Lolo National Forest on a spot she doesn’t want me to disclose. Too many humans might descend and create a disturbance, she says. The Common Loon, she explains is not endangered in Montana: about 200 of the goose-sized migratory birds live in the state. But because of intense recreational use of the low-elevation lakes that loons love, the species is considered “sensitive” — protected by forest and wildlife agencies much as if they were threatened or endangered. Their most vulnerable time is when they’re establishing nests, hatching eggs and caring for young chicks, or roughly from mid-April through June, says Kelly. Once they lay their one or two eggs, “if they’re scared off the nest for even an hour they’re likely to abandon it and the chicks will die.” Jet skiers, canoers, someone fishing off the side of a boat, even a quiet bird watcher can disturb nesting loons, she says: The birds react to anyone within 200 yards of their young.

Along with us is another loon expert, Pat Dolan, Lolo National Forest wildlife biologist, who sets up a scope to scour the water and she and Kelly tick off a list of other loon dangers: Property owners who wipe out nesting habitats to make front lawns. Unleashed dogs. Plastic six-pack rings (they can strangle loons and other wildlife as well). People who leave out garbage, which attracts ravens and raccoons — major loon predators. As it is, only about 24 loon pairs successfully raise chicks in Montana each year, Kelly says, and in an effort to keep those numbers from falling, Kelly and Loon Society volunteers wage information campaigns and post floating signs that encircle loon territory in heavily trafficked lakes. “Loon Nesting Sanctuary. Do Not Disturb Nesting Loons or Their Young,” the signs read. Kelly points one out to me, pulls the binocs away from her face and scans the waterline. “Gee, I just saw a loon pair here yesterday. We should be able to find them,” she adds.

I realize in totally un-Zen-like spirit that if I don’t see the little black and white suckers I’m going to be steamed. A wood duck wags toward us; beyond us lies a critical wilderness corridor that links the Mission and Swan mountain ranges, allowing migration of grizzly and elk. The view is gorgeous and the spot we’ve chosen is loon perfect: undeveloped, with marshy outlines and clear water that the birds, visual hunters, need for fishing. The late afternoon air runs alternately hot and cool as the wind pushes the pussy willows on shore. I calm myself by taking note of distant birds that might be loons, but they turn out to be grebes.

Loons, I know, have always demanded patience as well as respect. Expert divers, with bodies built for swift underwater swimming, the birds are adept at disappearing below the surface. And for their crazy “laughs” and black and white countenance — gleaming ebony heads, white breasts fringed with zebra-like stripes and white “necklaces” like a string of pearls — they’ve been a source of legend worldwide. Cultures from Mongolia to Siberia have considered loons sacred, as have the Chippewa and Ojibway tribes in North America. Loons can cure blindness and accompany souls to heaven, legend has it. Creation tales tell how a loon provided the mud with which the Earth was made.

Loons are not entirely blessed, of course. They’re terrifically clumsy — on land they can only shuffle (thus their vulnerability on the nest). And yet they’ve survived in a wide breeding area from the northernmost United States through Canada, Iceland and beyond, migrating in winter and returning again and again — often with the same mate — to the same lakes in spring. Faithful birds deserve faith, I tell myself. And then Kelly takes a step back.

“Found ’em,” she announces quietly, and points. “A pair, out there.” Dolan deftly zooms in with the scope and stands aside to offer me a look. And there, glaring red-eyed in my direction, are the two black heads. I note the trademark low-on-the-water float. The pair drifts nonchalantly mid-lake. I can’t ask for anything more, until I’m given it anyway. A bald eagle appears overhead — one of the loon’s deadliest enemies.

“Look out,” Kelly says. The eagle circles, swoops lower to scope out the meal. Am I going to have to watch one of these birds eaten before my eyes? The loons crane their necks at the threat above them. “They’re going to start giving a warning wail,” Kelly tells us, and in an instant, they do: a two-note then three-note owww-oooohhh howl echoes around us, a sound that one can hardly believe comes from a bird.

“Dive, you guys!” Kelly mutters. “Why aren’t they diving?” she asks Dolan, and with that it is the eagle that dives: the raptor aims for the water and the loons disappear beneath the surface an instant before the eagle splashes down, feet propped forward to clutch its prey. The huge bird comes up triumphant. With a fish.

“God, that was close,” Kelly says, and while she’s still talking and we’re all doing a Marlin Perkins-ish post-skirmish commentary, another bald eagle shows up scruffy and dark-headed, obviously immature. And the young bird, unbelievably, goes after the older bald’s meal. The two eagles swoop and circle each other until, in victory, the senior bird, white head gleaming, takes his catch to the branch of a larch and begins to feed.

“We arranged that just for you to see,” Kelly says, smiling.

My heart is racing, and I smile in return. I’d been rooting for the loons harder than I knew.
And a few hours later, driving home to Missoula, I couldn’t help but wonder about all that. What if I hadn’t seen the loons? I’d always been intrigued by them, but I’d never felt for them before — was feeling based solely on seeing? Could I not care about things that survived away from view? I wanted to tell myself I cared about all wild things whether or not I saw their displays, but was my true connection — like so many things Western — based on being there? It seemed to me as I navigated along the Blackfoot that loving a loon, loving anything, made a person a part of something larger, made them a witness to landscapes and lives that needed protection. Seeing made us understand how important it is that the chance for seeing exists — that the object of our sight stays alive. But it was a hard thing to get a handle on. The world that luck had shown me that day was absolutely filled with wonder. And I was glad, whether or not it was right, that I had finally seen my loon.

Twenty years later, Lynn Kelly remains the president of the Montana Loon Society. According to her, efforts to protect the loon population have prevailed despite increases in recreational activity in the birds’ habitat.

“What’s interesting is that even though we have busted our tails to preserve habitat and have seen the recovery of some lake habitat in the last two decades, we still have a population of around 200 birds,” notes Kelly. “We still have the loon in Montana, that is a huge success story, but the scary thing is that if we stop our efforts, we could lose our loons very quickly.”

In 1996 the society started a banding program to track the Montana loons; over half of the population is banded. The program revealed that the Montana birds migrate to the Pacific Coast between Seattle, Washington, and Santa Barbara, California. Loons migrate through Montana en route to Canadian lakes and can be observed on large reservoirs and lakes in many parts of the state during the spring and fall seasons. Some examples of migratory stopover sites include Pablo National Wildlife Refuge and Flathead Lake in northwestern Montana, Clark Canyon and Canyon Ferry Reservoirs in southwestern and central Montana and Fort Peck Reservoir in northeastern Montana. Migrating loons are also occasionally sighted on large rivers such as the Missouri and Yellowstone.

The 2013 Summer Loon Survey Day will be held the third Saturday in July. To volunteer for Summer Loon Survey Day, visit www.montanaloons.org  to find the specific coordinator in your area or contact the Seeley Lake Ranger Station at 406.677.2233, the Murphy Lake Ranger Station at 406.882.4451 or the Montana Department of Fish, Wildlife and Parks at 406.752.5501. 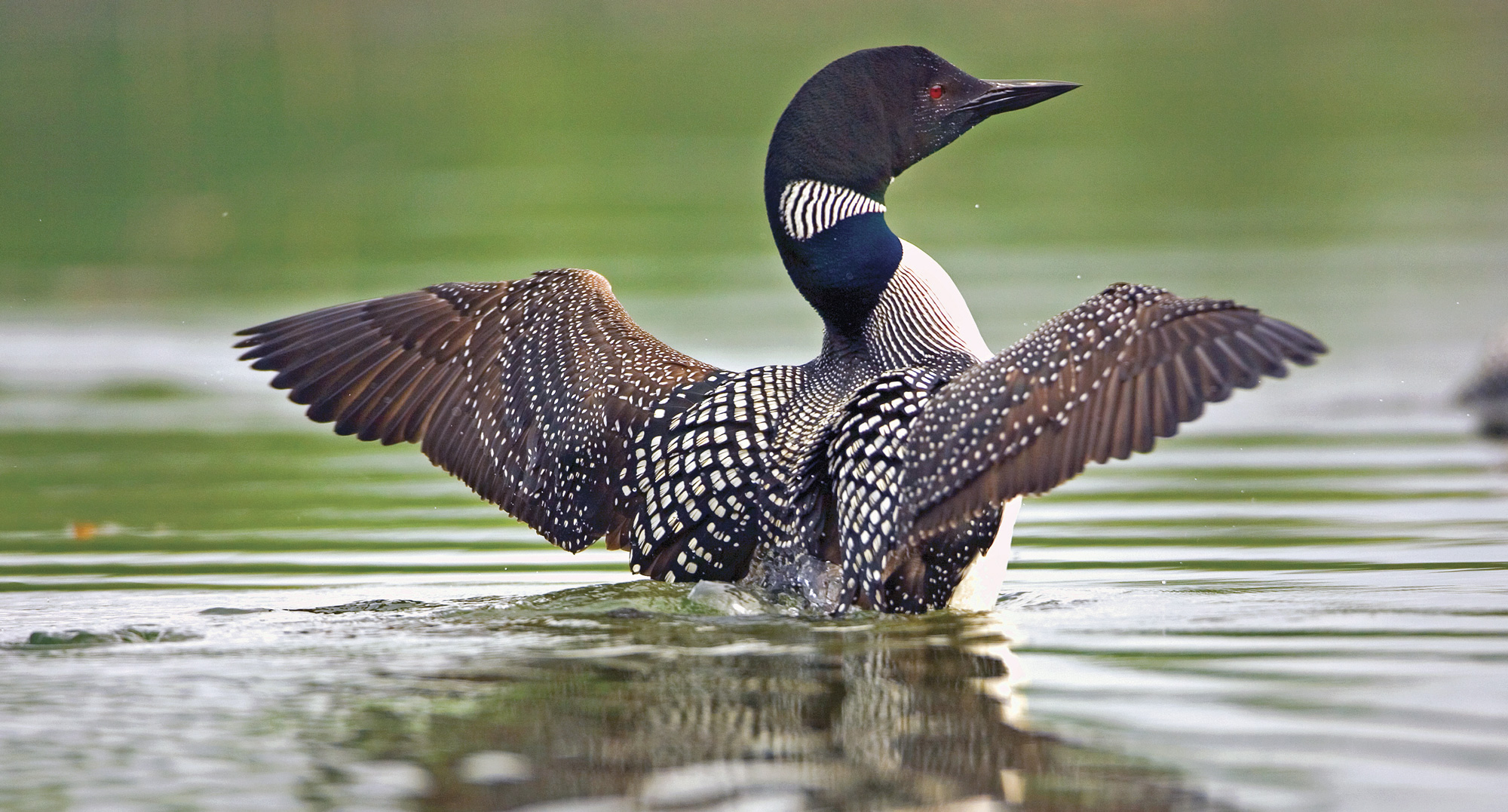 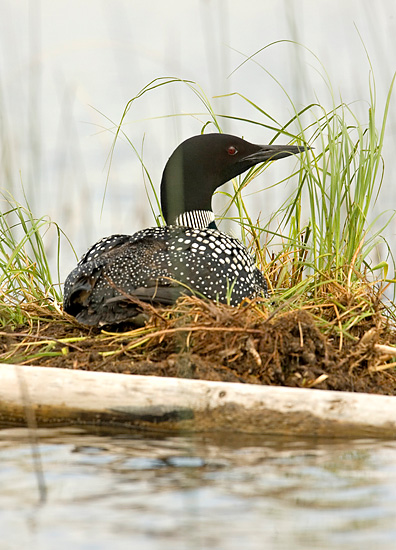