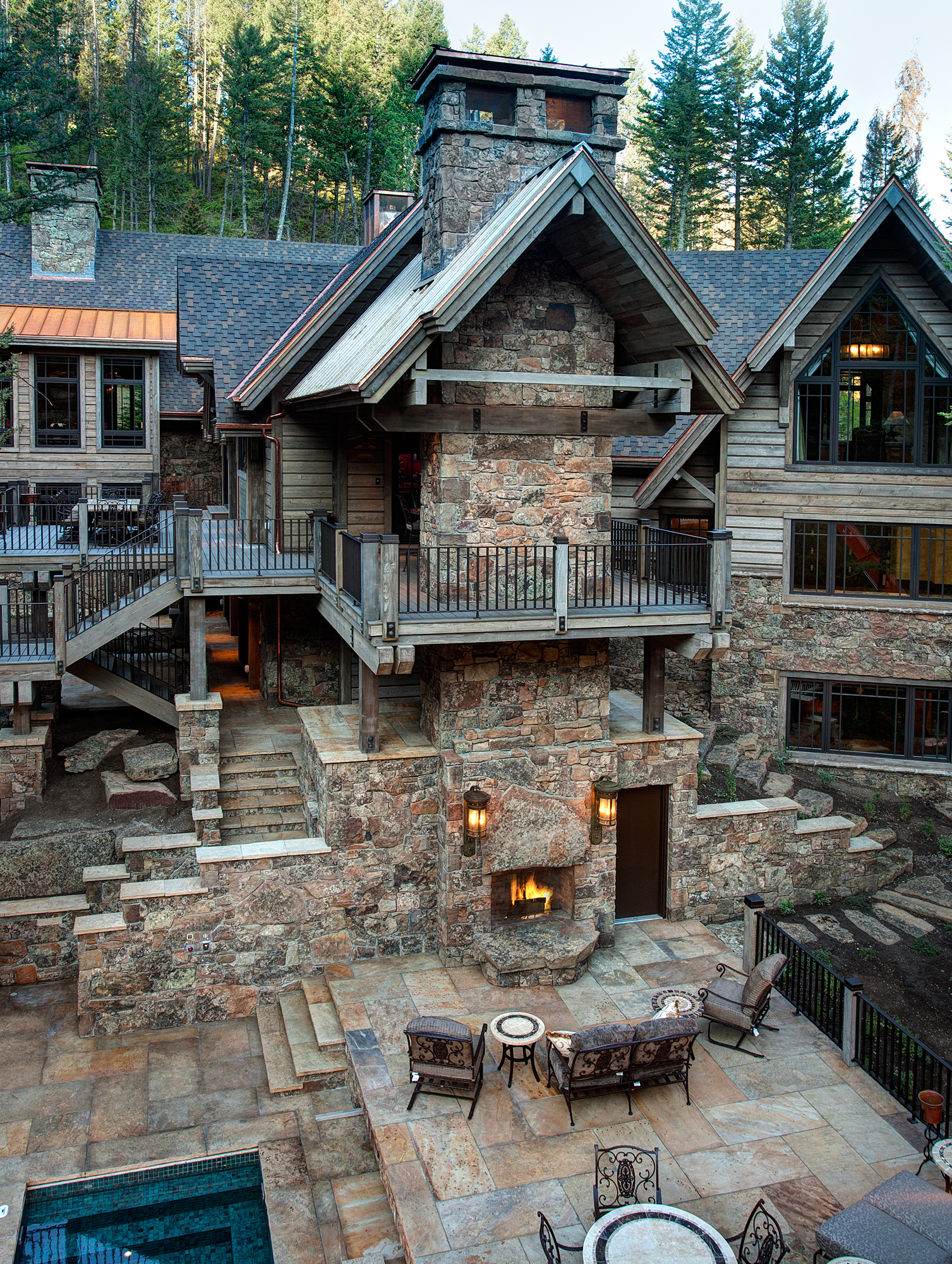 TUCKED INTO THE TOWERING FOREST within the Gallatin Range south of Bozeman is Raven Roost, a house as mysterious and intriguing as its name. Designed and built by Terry Covin of TLC Builders and Design Associates, in Bozeman, the luxury home radiates a sense of welcome from first sight.

With a nod to the tradition of some of history’s best builders, Covin designed a Scandinavian gable entry that shades the massive 4-foot by 8-foot front door. Stepping into the house feels dramatic, as the black and tan granite floor unfurls into a room wrapped with elements of timber, stone and forged metal. A broad set of stairs leads up to the great room, where a mass of Montana rock houses a two-sided fireplace and an impressively mounted mountain goat reflects the owner’s sporting pursuits.

From there, the landscape unfolds quietly, from the creek to the east and the filtered daylight on the other two sides. The living space is divided into three separate areas, including a conversation area with two sofas and views through a sweeping cathedral window. An antique billiard table anchors one corner of the room, while on the opposite side another intimate seating area with two 19th century-inspired upholstered chairs balances the space.

Following the contour of this timbered site required creative adaptations for a house of this size. The result is nine different levels that ascend up the hill to create multiple layers of privacy and coziness. Ultimately, the expansive scale of the 10,200-square-foot house does not overwhelm in showy grandeur, but instead unfolds gracefully room by room.

“We didn’t want the size of the house to overpower the coziness, so we created intimate spaces,” explains Covin. He worked with independent designer Roberta Cestnik to source the furniture, tile, rugs, drapery and artwork, among many other details.

While Covin’s direction touched every part of the house, from custom lighting, flooring, cabinetry and one-of-a-kind furnishings, Cestnik’s touch shows in the bright pop of jewel-red accents of furniture, bedroom linens and paintings from Rocky Mountain-area artists. The home’s interior palette was drawn from the natural influences of the trees, earth and stone. Interior walls alternate between a stony plaster to a rich grey and black stained wood, with dark oak floors and woodwork echoing the shadows of the forest.The home is laid out for entertaining, with a formal dining area just off the entryway that links to the kitchen and then connects outside to a second level balcony, which ultimately wraps around to an outdoor fireside eating area. The dining room is one area where TLC Builders and Design Associates outright shines; it is lined with hand-tooled leather panels on the wall, wet bar and mountain views through true divided light windows on two sides. Covin designed a king-sized harvest table and chairs, which were constructed by Mountain High Woodworks.

In the kitchen, a central island anchors the room with a Wolf range and an enormous, steel hood that lends a sculptural form to the room. A walk-in pantry off the kitchen keeps the area open for entertaining by eliminating clutter. As in every inch of the home, detailed workmanship showcases the best materials so that every room merits intimate study.

Though the house is large, there is an underlying attention to detail that is uncommon even in a region renown for its excellent custom craftsmanship. Covin addressed every aspect of the home from start to finish for his client that clearly had an unlimited budget. For Covin, that translated to an interpretation of excellence that is unparalleled. He commissioned the finest craftsmen and master carpenters to infuse the home with the ultimate in customized luxury.

“I call it the 300-year-old house,” quips Covin, “Because barring a forest fire, this house should still be standing centuries from now.”

The fortress-like home features eight fireplaces and each bedroom has connecting doors to the outdoor areas. Specifically, the master suite, which features a custom-designed, four-poster king bed, inspired by Celtic symbols and capped with hand-forged iron to echo other metal accents throughout the home, is appointed near the sound of the creek. Through the luxurious master bath, the homeowner can step outside to a private Jacuzzi and patio area replete with a fire pit. That’s assuming the owner deigns to leave the opulent master bath, which boasts a large steam shower, a Jacuzzi bathtub that holds 320-plus gallons of water and can fill in seven minutes.

Above the kitchen is the homeowner’s office and additional bedroom. And on the ground level is a climate-controlled wine room, clad in stone and wrapped with iron “jailhouse” bars that are a kitschy nod to the Wild West. From there, the hallway winds around toward the hobby room, with custom-built fly-tying desk, along with gun and rod storage.

Outside, the creek flows swiftly downhill and draws wildlife that linger along the 40 acres which abut state land just beyond the outdoor pool and patio.

“I feel privileged to have designed and built a home of this caliber that exceeds my client’s expectations,” says Covin.

Originally, his client was looking for a little log house in the woods. Covin, whose design-build firm, manages only one project at a time, quickly dispersed this idea and affirmed the attributes of a timberframe home in a mountain setting. He noted that the site always dictates the architectural style for his projects.

Designing and building since 1977, Covin intuitively constructs homes that respond to their surroundings. With past projects in Pennsylvania, Massachusetts, South Carolina, Colorado and Idaho, he notes influences that range from Frank Lloyd Wright to Japanese joinery and a strong connection to nature.

“To me it just seems right to want to live in a home that compliments the beauty of its surroundings and inspires us to live harmoniously with nature.”

Sparing no expense, the master suite is better than any spa. The master bath features a two-person steam shower, oversized Jacuzzi tub and access to a private patio. A king-size four-poster bed constructed of wood and steel adorned with Celtic symbols punctuates the master bedroom. 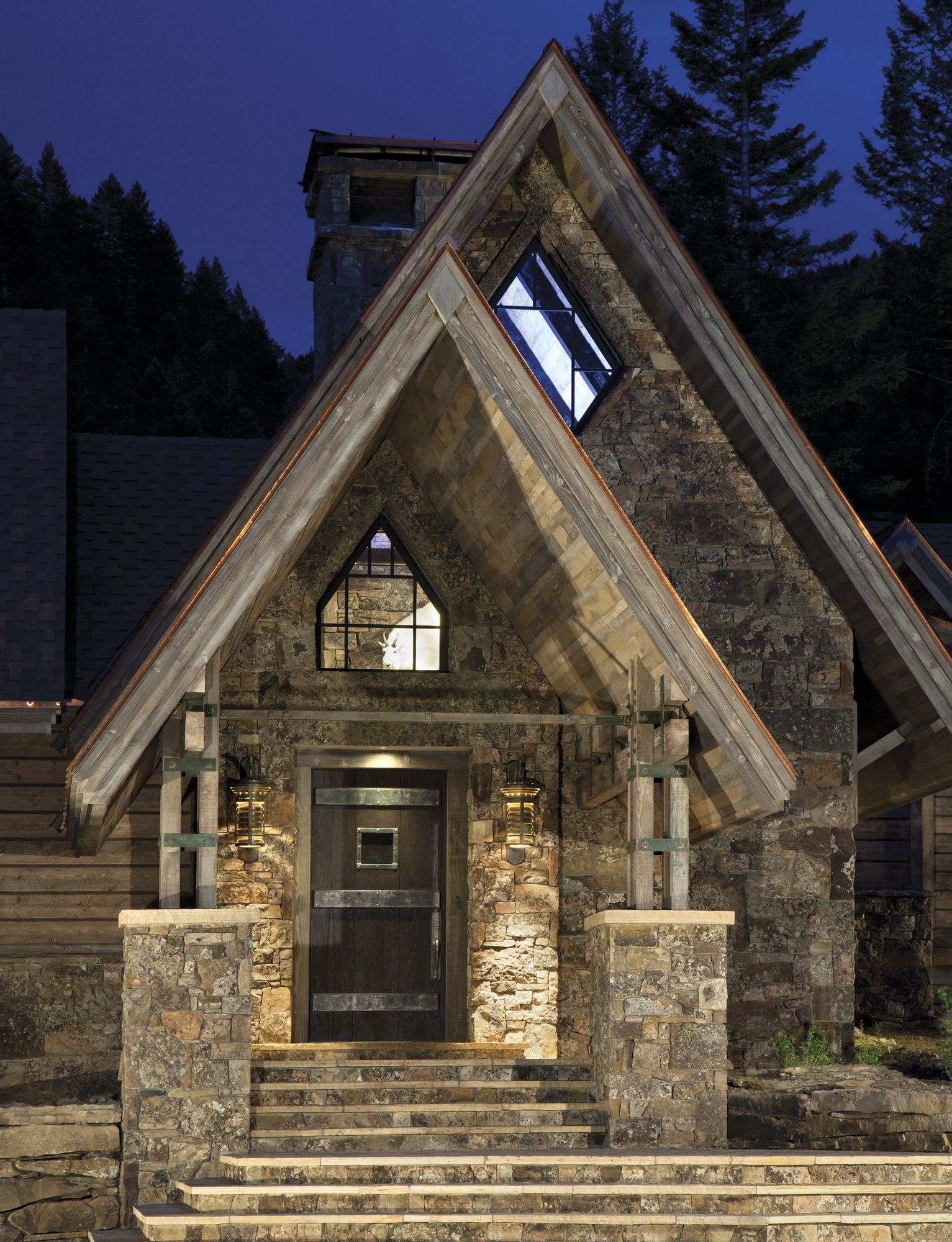 A broad staircase welcomes visitors to the front door of Raven’s Roost. TLC Builders and Design Associates’ attention to detail is already evident in the copper flashing along the roof and within the Scandinavian double gable entry. 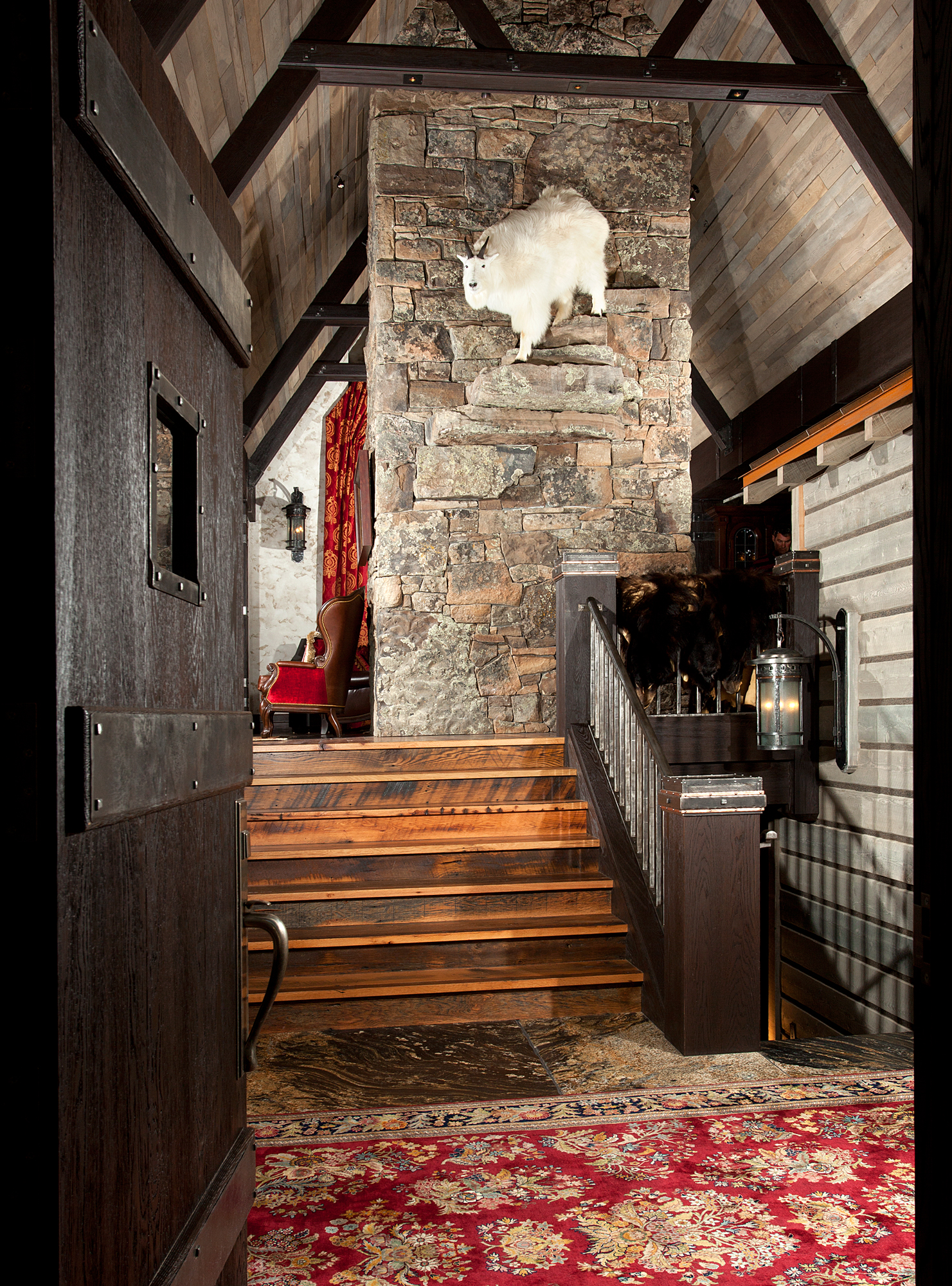 A rare mountain goat stands sentinel on the rock ledge over the foyer. The custom-built front door was constructed by Montana Sash and Door in addition to many features in the home. 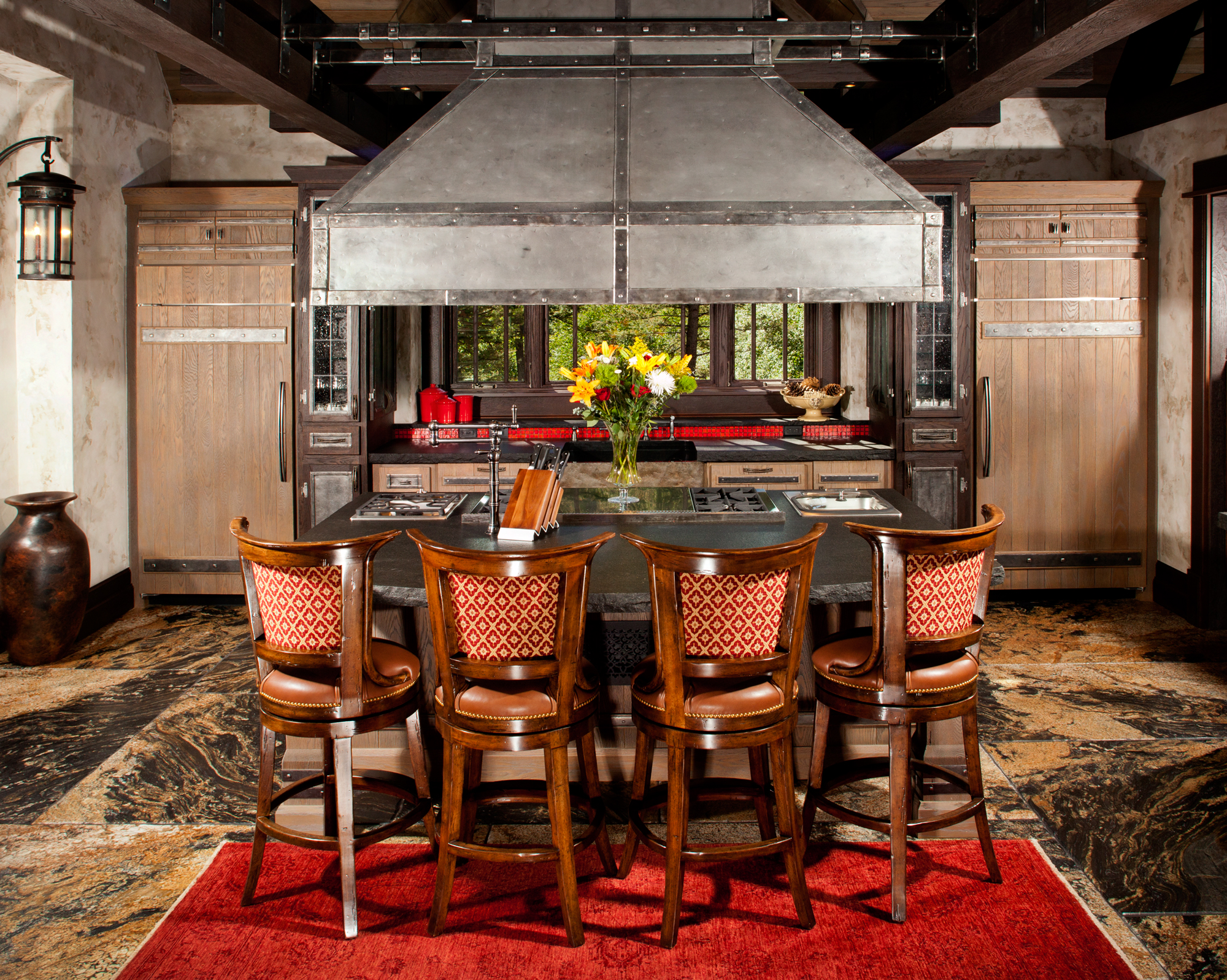 The custom-made zinc and steel strapped hood is a centerpiece in the massive kitchen, where sweeps of granite add a dynamic element to this working space. 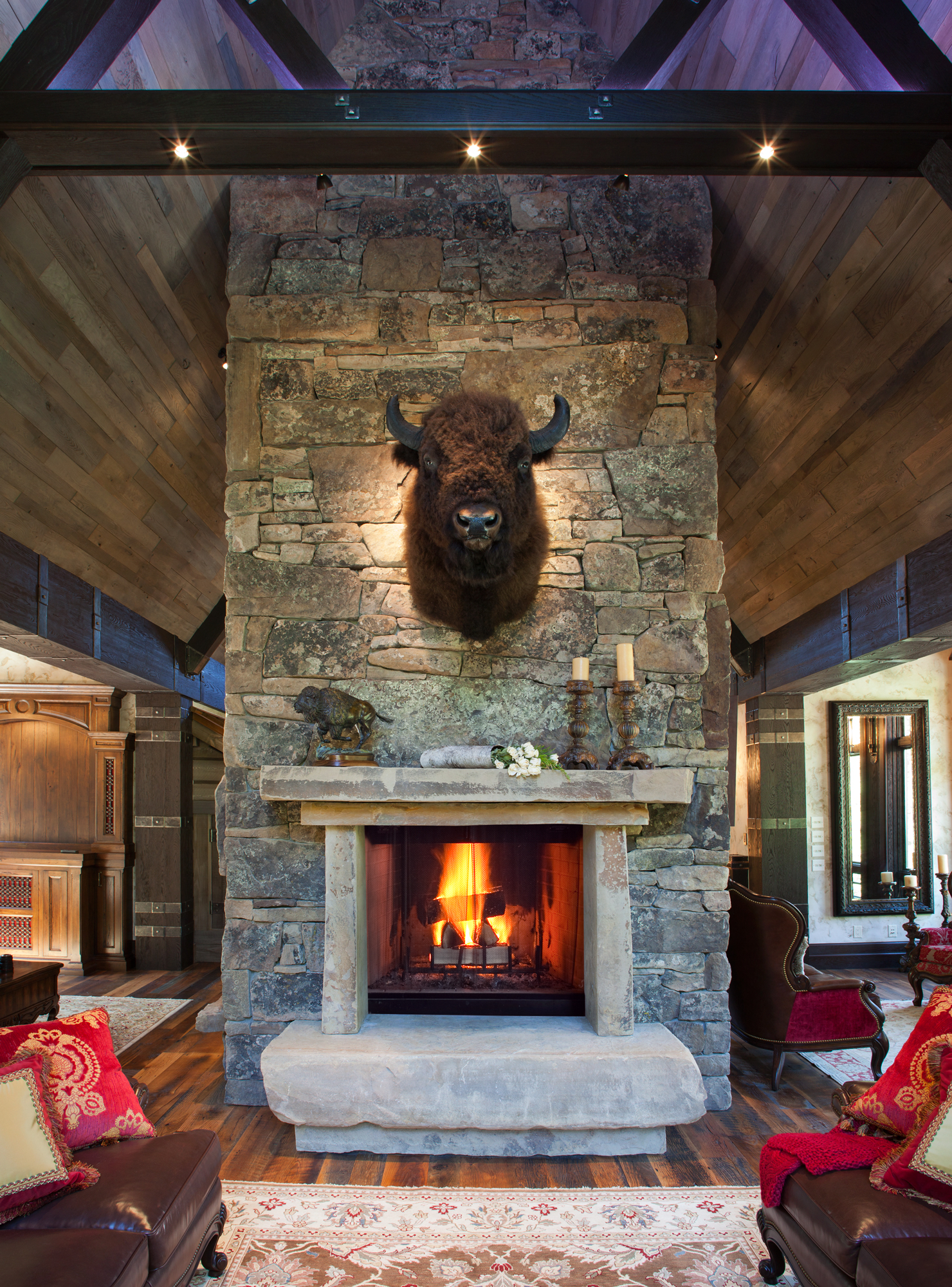 Anchoring the Montana Moss rock fireplace in the great room, the stately buffalo mount seems to represent the home itself: Massive and regal. 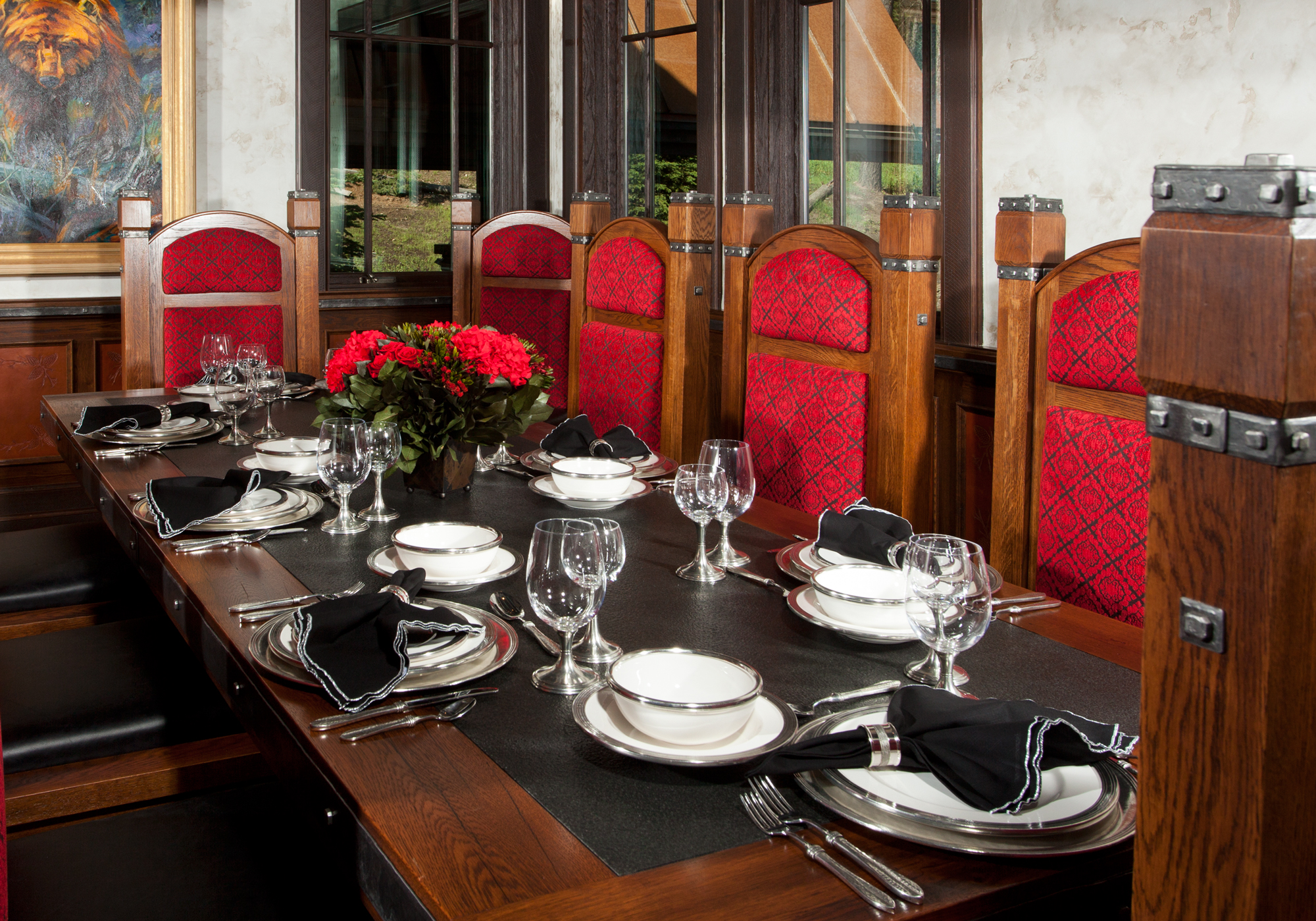 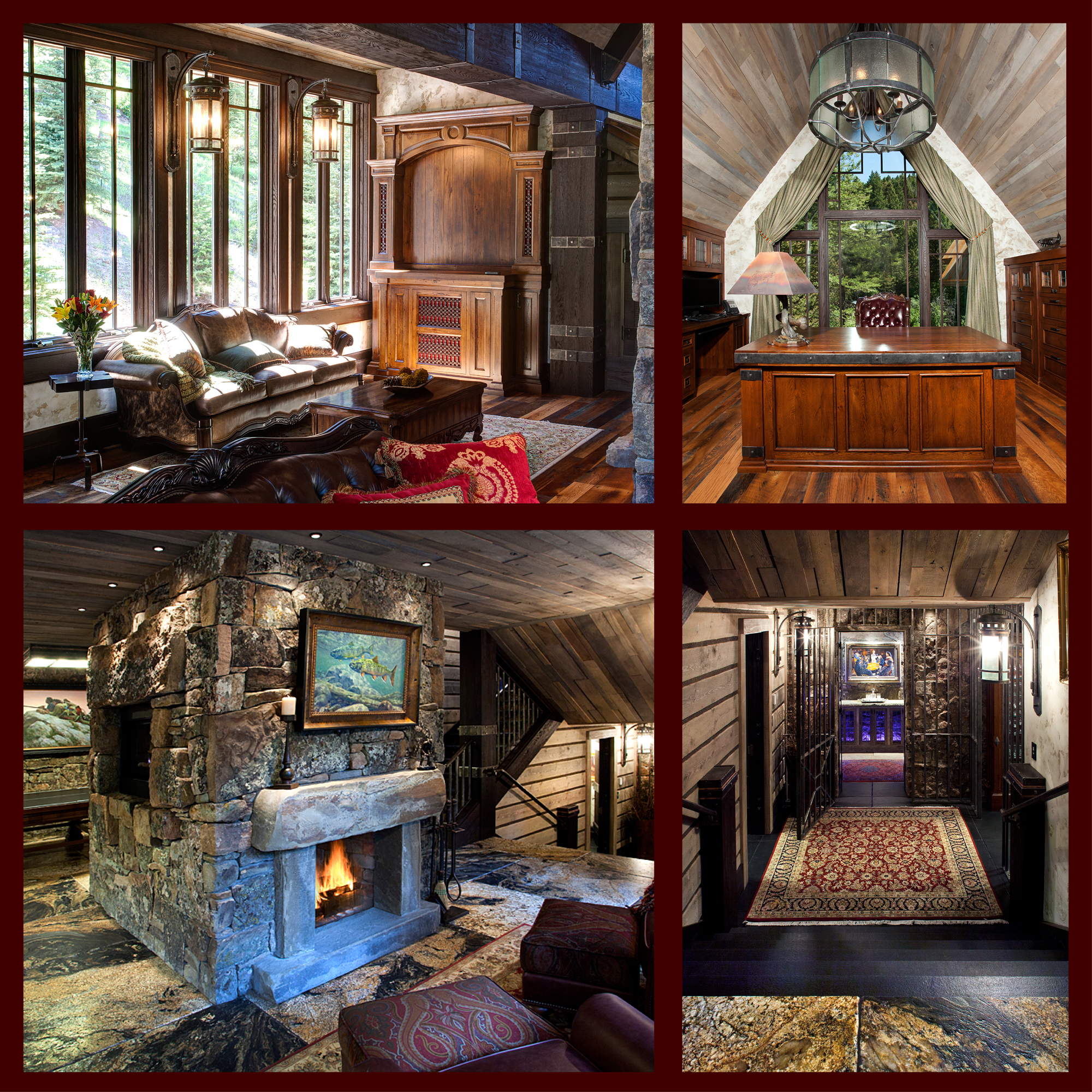 Top left: Hand-forged custom lighting accents living areas throughout the house. • Top right: A floor-to-ceiling cathedral window and custom-made desk cultivates an essential air of importance in the office. • Lower left: A stone column that features a double-sided fireplace and nook for a flat screen television craftily divides the great room into three separate, but cozy living areas. • Bottom right: The lower level of the house leads to a private wine cellar, whimsically clad “behind the bars” in a nod to the jailhouse of the Wild West.