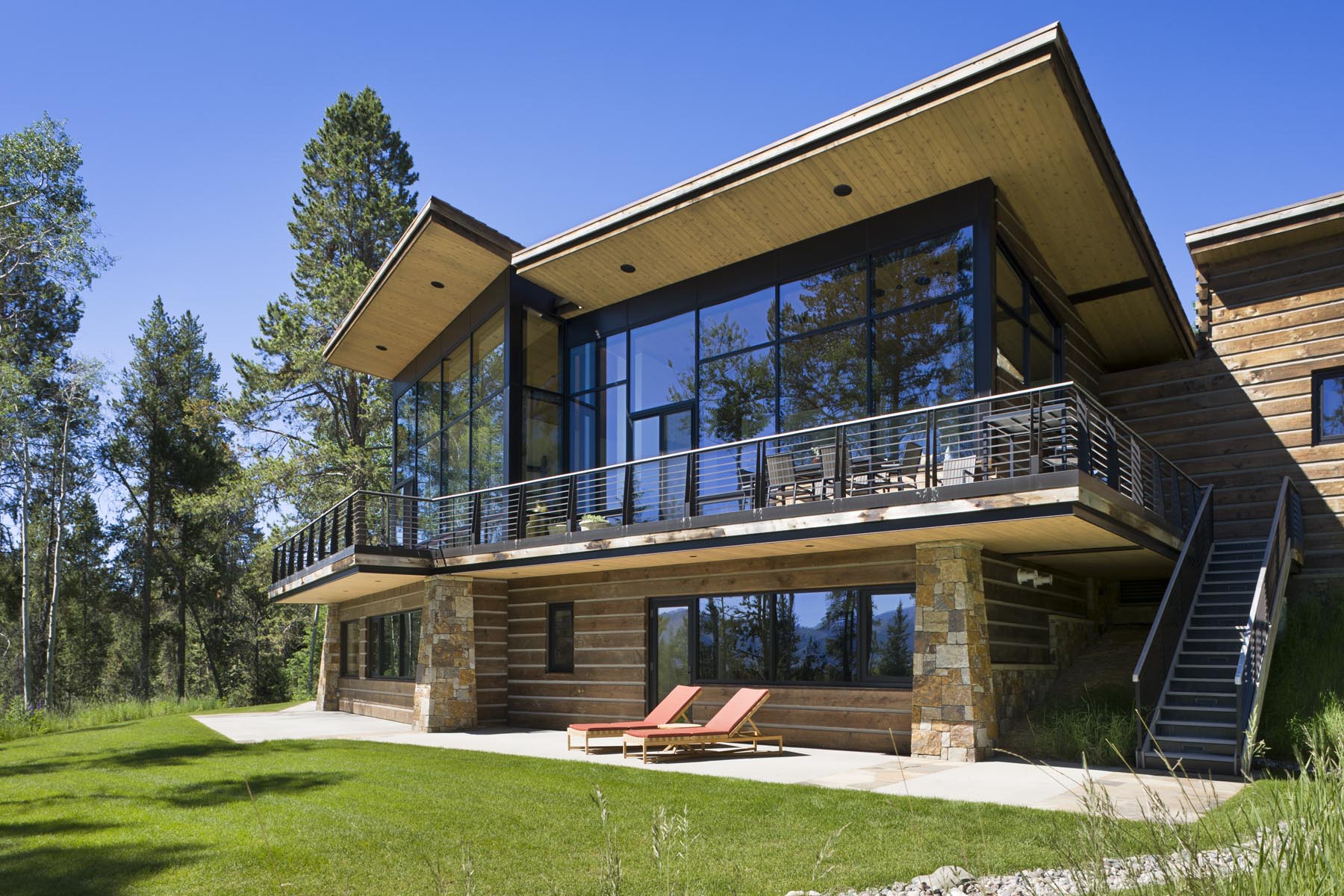 FROM THE EXTERIOR, the home is unassuming. Low slung and tucked into a Douglas fir forest, its front door is modern, made of oxidized steel and wood, but not ostentatious. There are few windows and the shingled roof gently pitches up and away. But then you ring the bell, the front door is thrown open for you and you walk into the definition of a grand entrance.

“Whether you plan it or not, every house has a sequence of events that unfolds when you walk in the front door,” says Tom Ward, principal and co-founder of Jackson’s Ward + Blake Architects and the architect of this home outside of Wilson, Wyoming. “There is this notion of compression and release. Here, as you walk toward the front door, the house looks like a bungalow. It is very compact and not tall. Walking through the door, three paces in, the roof goes up and the floor goes down, opening the house to the sky while the eye keeps falling down to the valley floor. You get almost 120-degrees of vertical, visual sweep. We don’t have much of a manifesto [at the firm], but we work really closely with the land, making design subservient to the topography and view sheds. This project really demonstrates that.”

The owners of this lot south of Wilson had been looking at property “on and off” for five years before finding this one in the Crescent H subdivision. “I immediately liked it because it looks out over 14 acres of open space,” says the wife, who was the driving force behind the couple shopping for vacant land rather than existing homes. (“I really love the building and design process and knew that was what I wanted to do in Jackson,” she says.) Set on a hillside at the southern end of the Tetons, the lot makes the most of the adjoining open space, looking not just out on it, but also down on it. “I had an idea of the land falling away giving this house something of a tree house feeling,” she says. And it does, especially because most of the eastern side of the home — the side that faces the open space as well as the Gros Ventre Mountains — is windows.

“I have a friend who says there really are no bad views in Jackson Hole,” says the homeowner, who has also designed and built an Old Spanish style home in Santa Monica, California. “I think that’s true and at the same time think the views we have are some of the best. We’ve got layers and layers of mountains and we can see the fireworks on Snow King.”

On a more micro scale, moose can be seen wandering around the backyard. Once, they even saw a black bear.

Such statement views of the Gros Ventres — and really most every room in the house but the mud, laundry, mechanical and powder rooms, the gym and the husband’s office have a wall of eastern-facing windows — do come with a price.  The nightstands in the ground-level guest room are stocked with sleep shades. “And we have to hide most of the good artwork,” the wife says. “I collect photography and the powder room is the only place it won’t get beaten up by the sun.”

Even so, the couple risks two important pieces in the entrance and great room — an oversize Ashley Collins multi-media piece of a horse from Diehl Gallery and a smaller, colorful piece of a traditional two-story house by David De Villiers. The couple found the latter at Tayloe Piggott Gallery. Neither Collins nor De Villiers are based in Jackson, but both of the galleries are. A Joffa Kerr sculpture sits on a bookshelf above the flat-screen TV.

Peeking around the partition separating the great room from the open kitchen/dining area, there’s a walnut table made by local craftsman Charlie Thomas of Magpie Furniture. A rug from Didi Thunder, a local textile designer with her own rug factory in Nepal, covers part of the polished concrete floor. “For me, a big part of building a home is about meeting the people who make the stuff,” the wife says. “Most everything in here, if it is built, it was built in this valley.”

While the home is decidedly contemporary with clean lines and interior details, it isn’t cold. Open shelves behind Thomas’ sleek table and wood dining chairs with solid, curving backs display folk art and mementos from the couple’s travels and life — a woven basket from Africa, a silver box from Iran (“My father was from Iran,” the wife says), and pottery from New Zealand. A still life of two ripe Anjou pears was a housewarming gift from a friend. The large abstract oil painting opposite Thomas’ table was a gift to the husband from an old friend. “I see it as a person backpacking, but other people see other things in it,” the wife says. “I love the colors.”

After visitors have taken in the views and the artwork, and hopefully heard about how some of the latter were acquired, the massive exposed steel beams in the great room will next grab their attention. “Tom really pushed for those,” the wife says. “I didn’t realize exactly what he meant until they were in. When I saw them I was hysterical for five minutes and now they are one of my favorite parts of the house.”

“We were fortunate to have had a wonderfully synergistic relationship,” Ward says. “[The clients] were open to ideas. I know [they were] initially conflicted about the three pods that composed the living spaces, but we figured it out together.” The wife admits, “I was nervous about these angles between the three different spaces, but Tom said it’d be fine.” And it is. The couple built this home as a vacation home. It’s now their full-time residence. 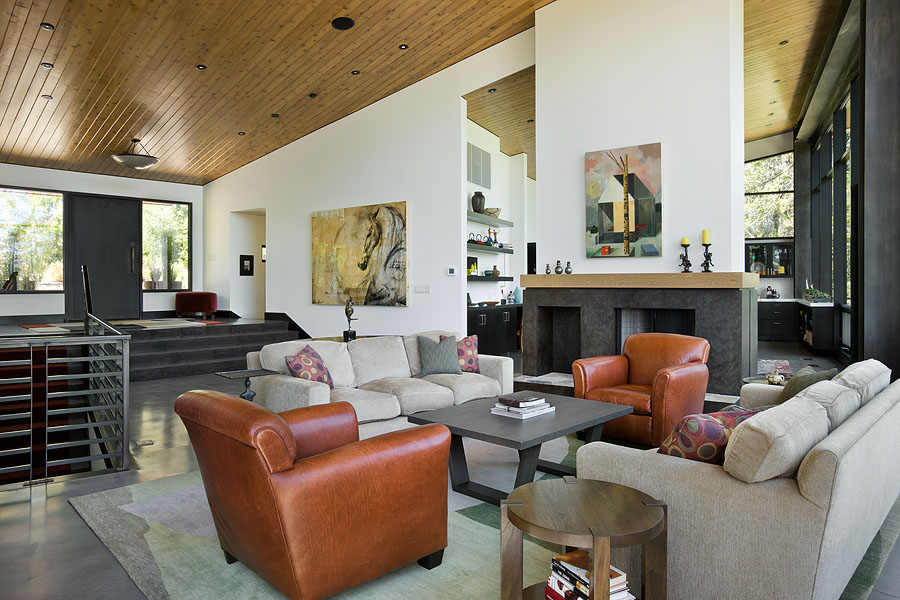 The homeowner did most of the footwork tracking down locally-made furniture and finding artwork in Jackson galleries, but a friend Karen Goldberg of Studio-G Designs in San Francisco, helped with certain choices to bring together the home’s simple, clean design. 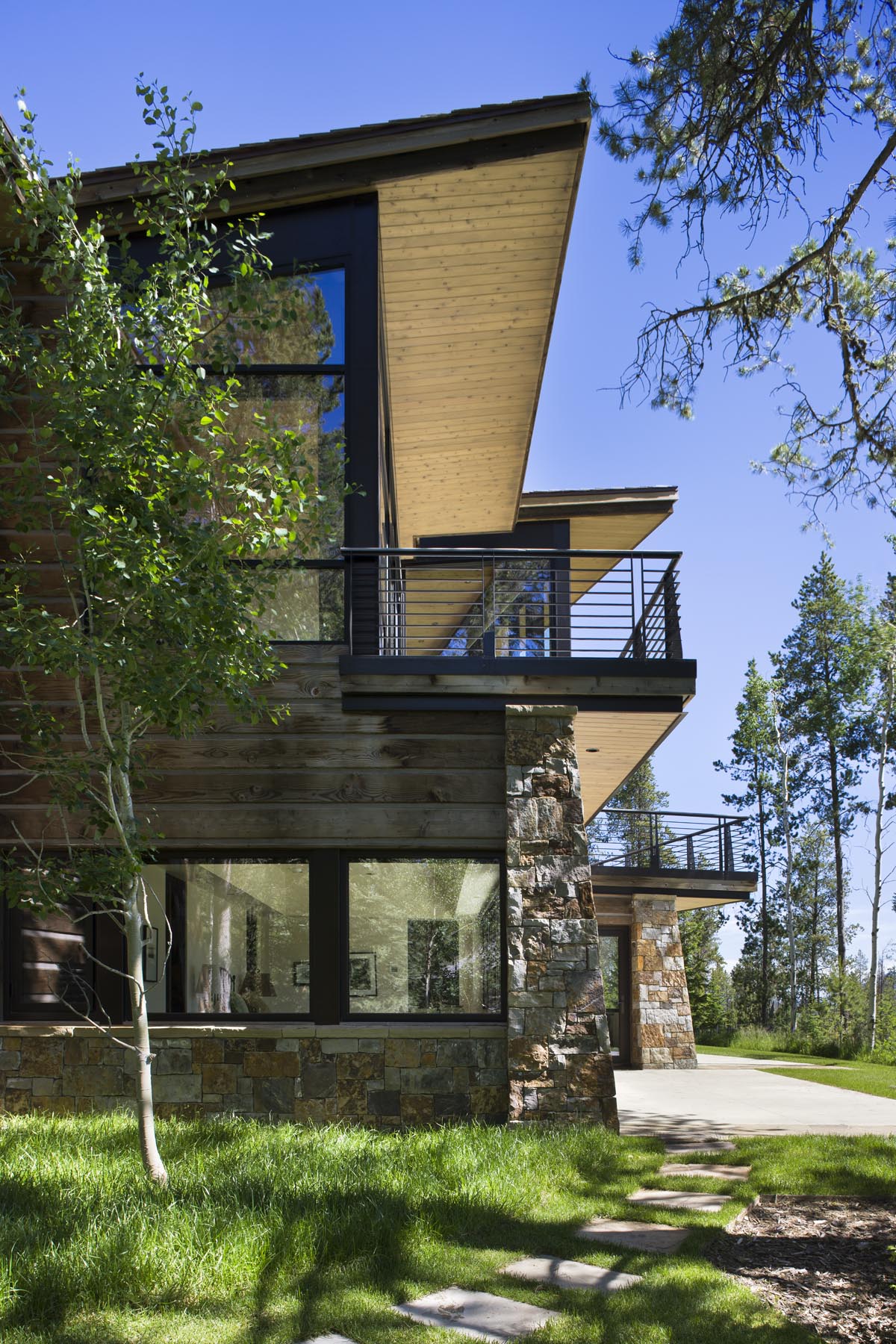 Incorporating log and stone in a contemporary architectural form grounds the soaring design of this home to its Western roots. 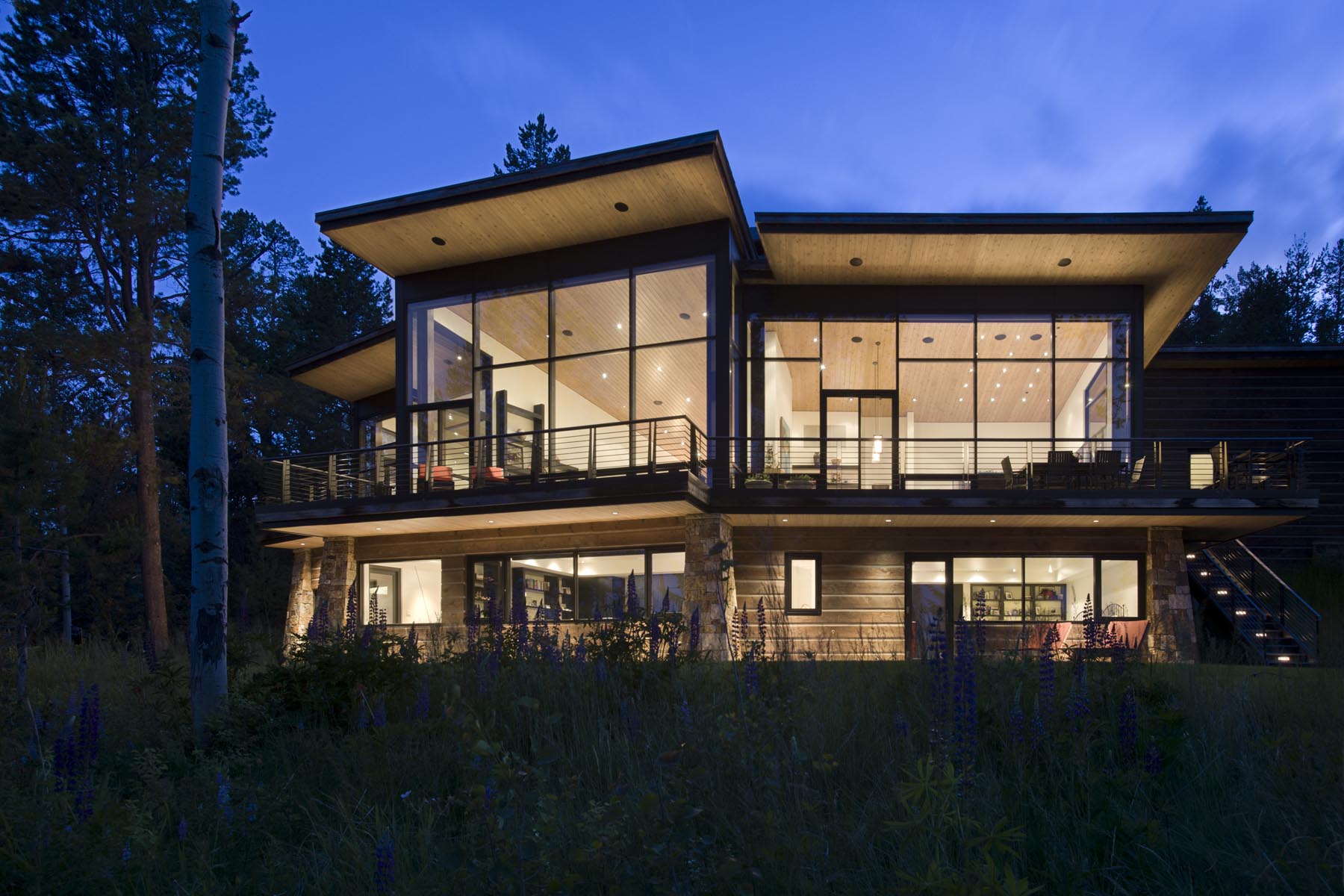 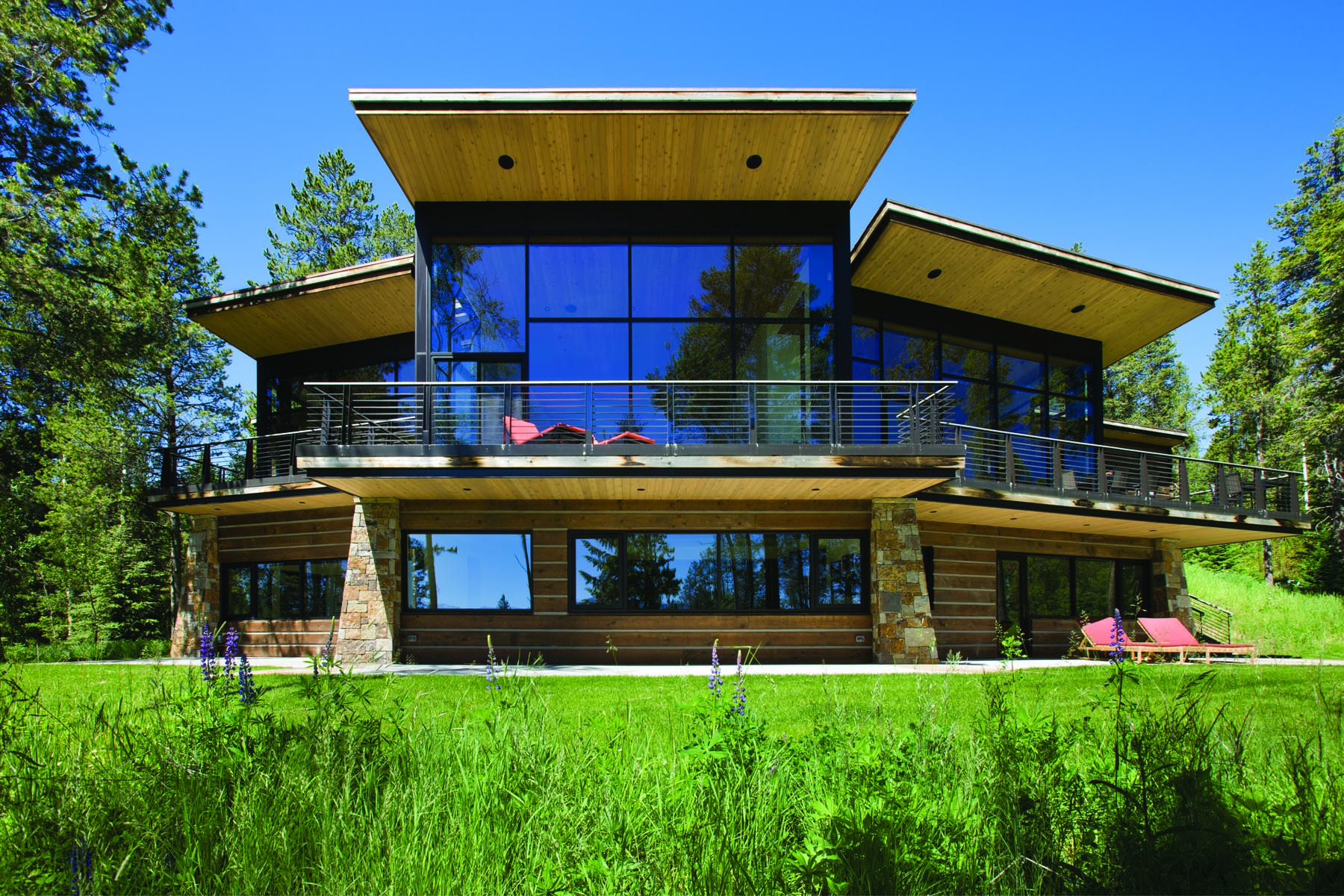 On the eastern side of the home, the design makes a vertical drop and opens out toward the landscape. 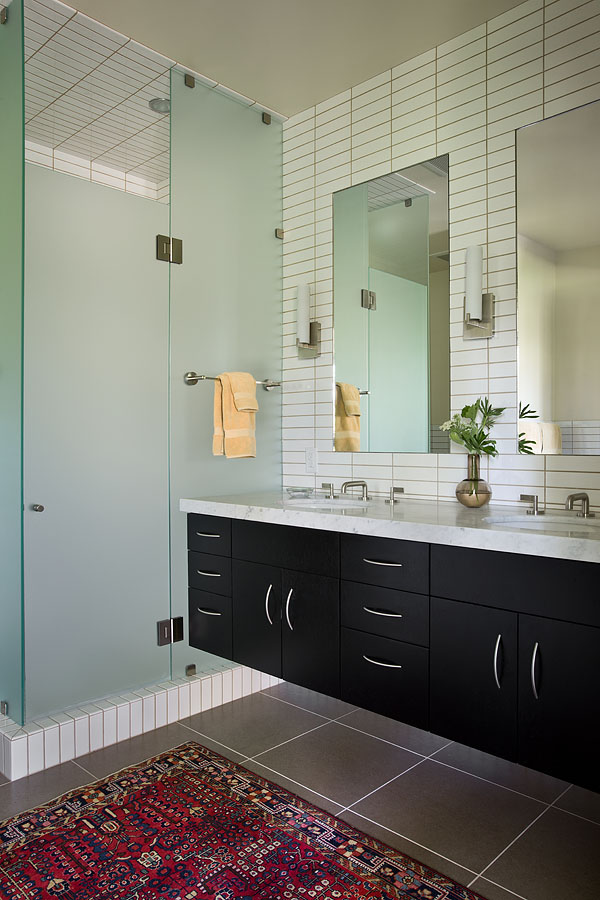 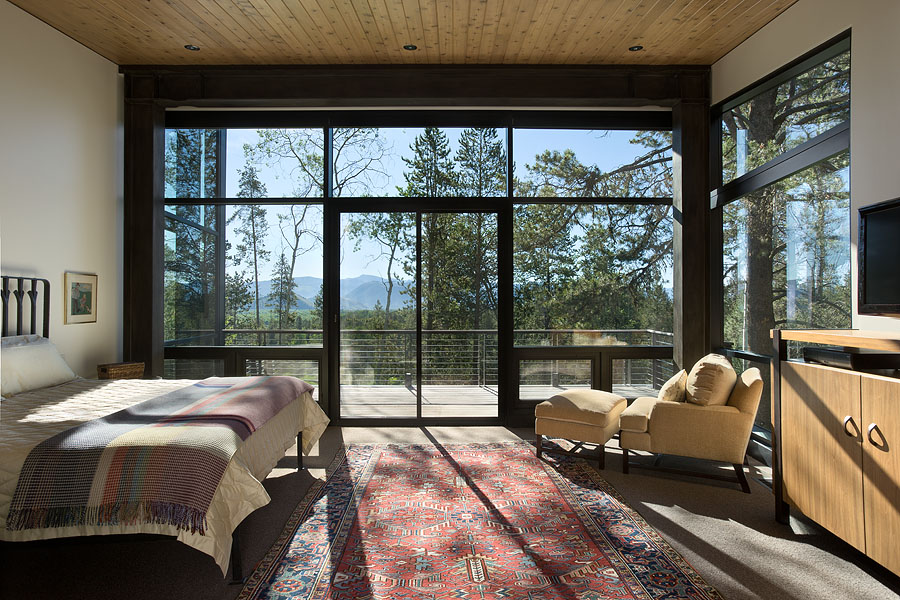 A serene view form the bedroom. 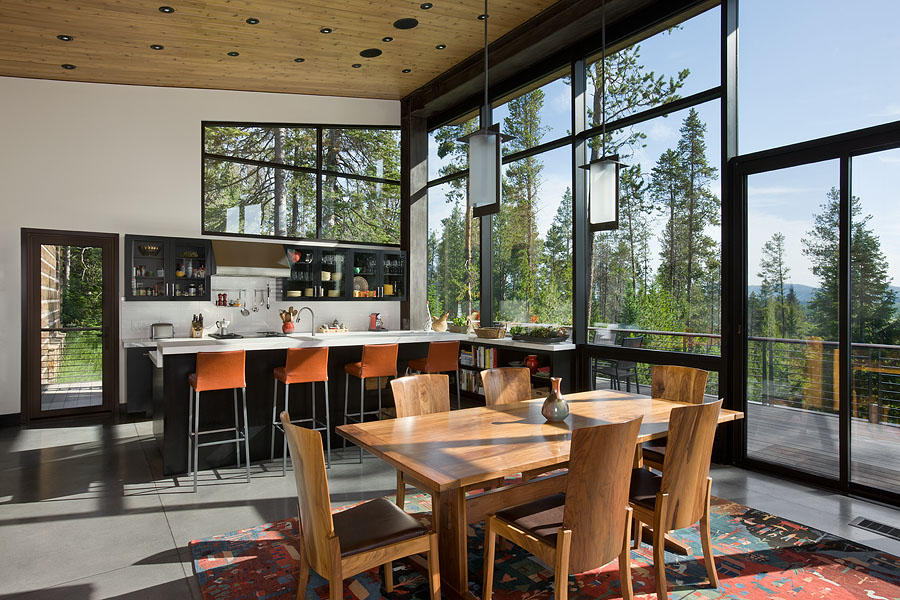 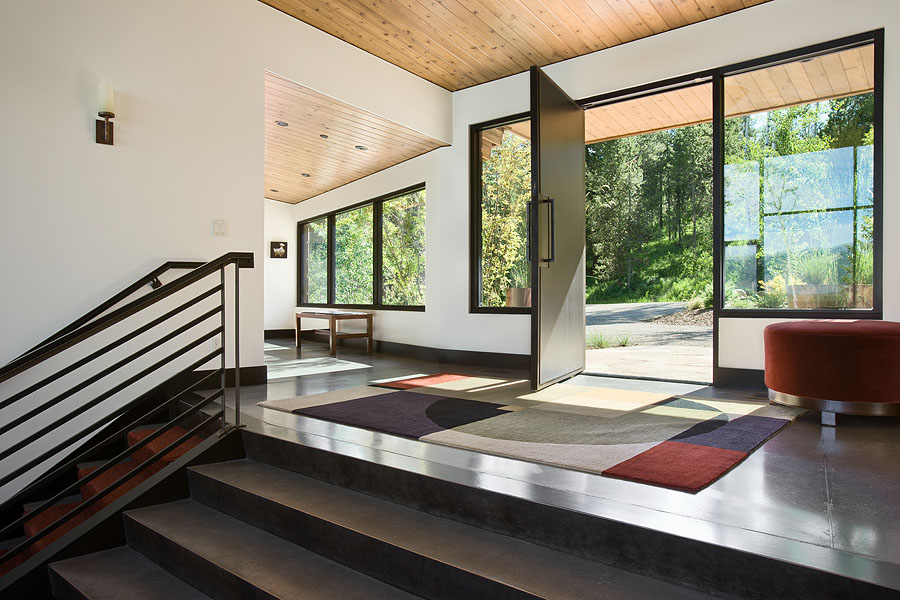