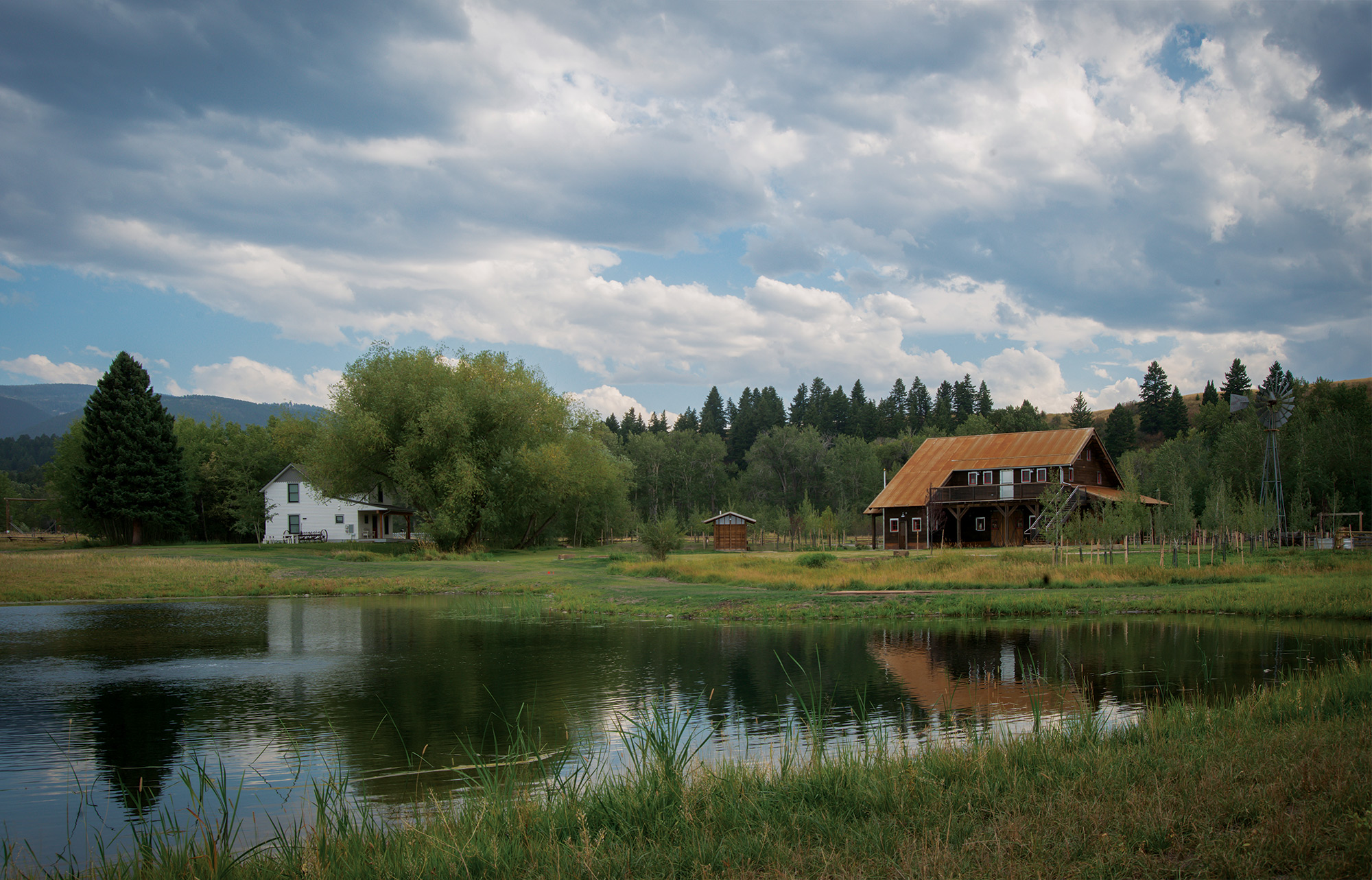 IT WAS AROUND 1870 WHEN DEVELOPERS STARTED platting downtown Bozeman, Montana, beginning with the buildings on Rouse and Main streets. The town stretched out toward the south with hopes that the construction of the Northern Pacific Railway through the valley would bring prosperity. By the turn of the century, homesteaded ranchlands dotted the Gallatin Valley to the south and beyond. One of these was a sizable ranch off what is now Cottonwood Road, a picturesque, winding road between Bozeman and Gallatin Gateway, that still holds onto a bit of homesteader charm.

When Lori and Jeff Lawrence of Danville, California, stumbled upon this ranch during a scenic drive — with a dilapidated farmhouse, barn, stables, corral, and granary — the views were about the only thing that was still intact. “It was the setting and the fact that it had a lot of good elements: an upper bench, agriculture, live water, trees, and it was not in the middle of nowhere,” Jeff said. “I was really looking for something that had the feel of a ranch.”

The owner was selling parcels of his ranch, and the Lawrences acquired the last available lot, 178 acres that stretch from Cottonwood Road out toward the east. Not long after, they acquired another 30 acres on the other side of the road. Instead of perceiving it as a rundown property, with outbuildings that would be dozed and replaced with much larger models, the Lawrences saw potential in the existing buildings and had a vision of restoring it back to what it was when it was built in 1906.
When it came to building, it was important to Jeff to keep the structures where they originally stood; and while some could be salvaged and restored, such as the farmhouse and granary, the barn had to be replaced. “I didn’t want to change anything from the standpoint of where the buildings were,” he said. “The reality is that I wanted something that represented what Montana was like back in the day.”

He worked with biologists to add ponds to the property, and with the help of local tradesmen, came up with a plan for restoring the house. One of the most influential, when it came to the building process and planning, was Merle Adams of Big Timberworks.

“The house was a mess. I barely wanted to go inside, but it was the original home that was part of the ranch, and I decided that I wanted to restore it back to exactly what it was,” Jeff said. “I looked to a lot of people who were native Montanans, asked them what they would do, what it was supposed to look like, so we could recreate that era.”

In doing so, they kept the square footage the same, making slight adjustments to the layout, turning a small main-floor bedroom into an office, and finding space for a washer, dryer, and larger bathroom. The end result was a clean and simple farmhouse, the original décor brightened up with light wood floors and light colored walls.

Kathy Koelzer of Montana Expressions, a furniture store and design studio that will soon move from West Main Street to Four Corners in Bozeman, took the lead on design. Having designed the Lawrences’ other Big Sky homes, she had a sense for their tastes. For Koelzer, however, because of their desire to recreate the era, this was a project to remember. “This property has such a great history; it shows what a typical farmhouse outside of Bozeman was like in the early 1900s,” Koelzer said. “We took it down to the studs and brought it back beyond its humble beginnings.”
She started out by doing some research and looking at old photographs of homes from that era. “They were so sparse and dreary, so we decided to brighten it up, but stay with antiques from that era,” Koelzer said. She combed antique stores, along with the Montana Expressions showroom, for rich examples representative of that time. Much of the furniture they chose came from Montana Expressions, including the leather couch, mohair chairs, an old kitchen table cut down and repurposed to serve as a coffee table in the quaint living room, and the bed frames and side tables in the bedrooms. But it’s the small touches that take one back: the worn, leather-bound books, the antique metal fan, the silver trays and crystal vases, the ancient binoculars sitting out like they were used recently to spot elk on the horizon.

Koelzer found a Wooten antique roll-top desk that was a perfect fit for the small office, at least stylistically, though she had to have it taken apart and put back together to fit it through the door. In the desk, she found old ledger sheets that she framed and hung on the office walls, along with an old Livingston Electric Company calendar from the 1940s.

To add modern-day conveniences without slipping out of the style, Koelzer made great use of retro-looking modern appliances, such as the fridge, stove, and the gas potbelly stove in the living room; a clawfoot bathtub sits by the window in the upstairs bathroom. She was able to refinish the original bathroom sink and a couple of the original wood doors, and she had duvet and pillow covers custom made from the fabrics that Montana Expressions carries. Walking from room to room, one can feel a connection to the past, to the family that once lived here and worked the land.

The Big Timberworks-designed barn sits in the same spot as the old structure, and is outfitted as a place for social gatherings with friends and family. “That barn is 100 percent Merle,” Jeff said. “He located it and convinced me to put on the outside deck that overlooks the fields. Merle had his hands on every aspect of every one of the structures here.” Although Adams died this past August, a timberframe structure he designed is currently under way across the street, intended to store a tractor and provide more guest quarters. Adams’ son is set to have his wedding party in the Lawrences’ barn this summer.

“After these last couple projects, you will never see anything else developed on the property,” Jeff said. The next step for the Lawrences is a conservation easement.

“This was a labor of love for the homeowner, as he was very involved with every aspect of the improvement of the property,” Koelzer said. “I’m so pleased with the outcome — it’s truly picturesque; a house from a different time with a new life.”

Jeff echoed that sentiment. “It ended up better than what I’d hoped for,” he said. 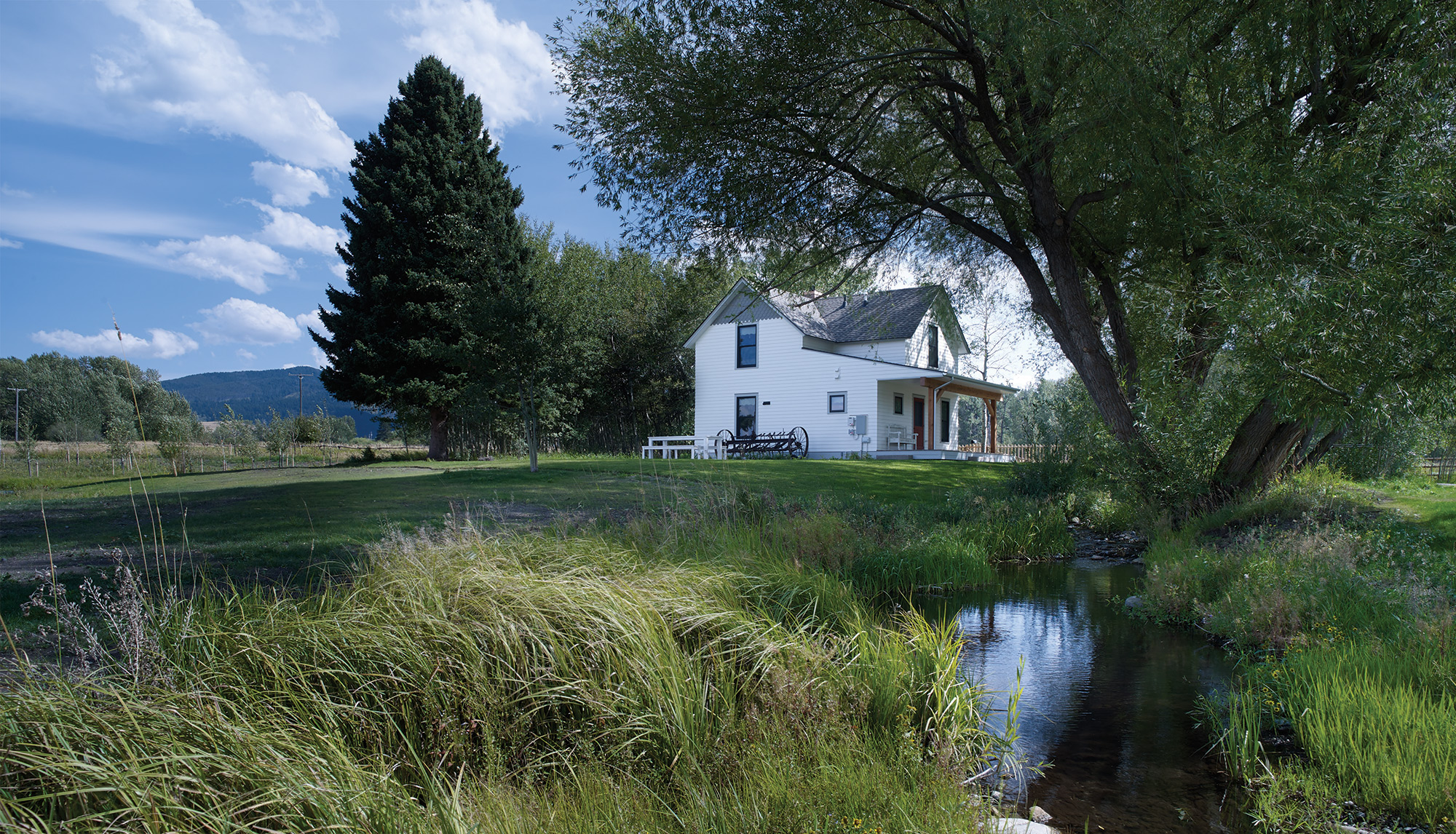 A creek runs by the farmhouse, which was kept to the same square footage as the original 1906 design.

Merle Adams of Big Timberworks designed the barn to serve as a gathering area for friends and family. 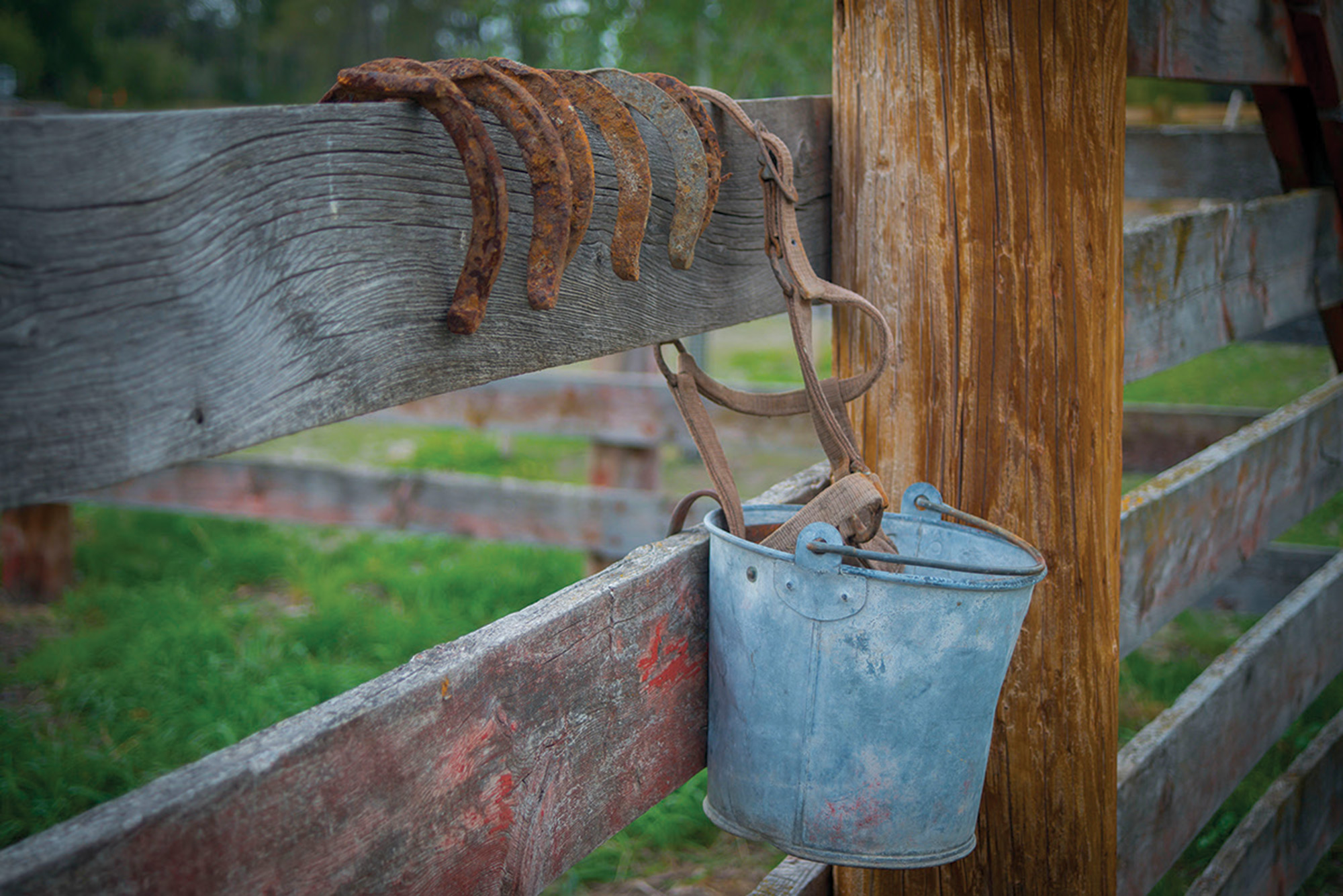 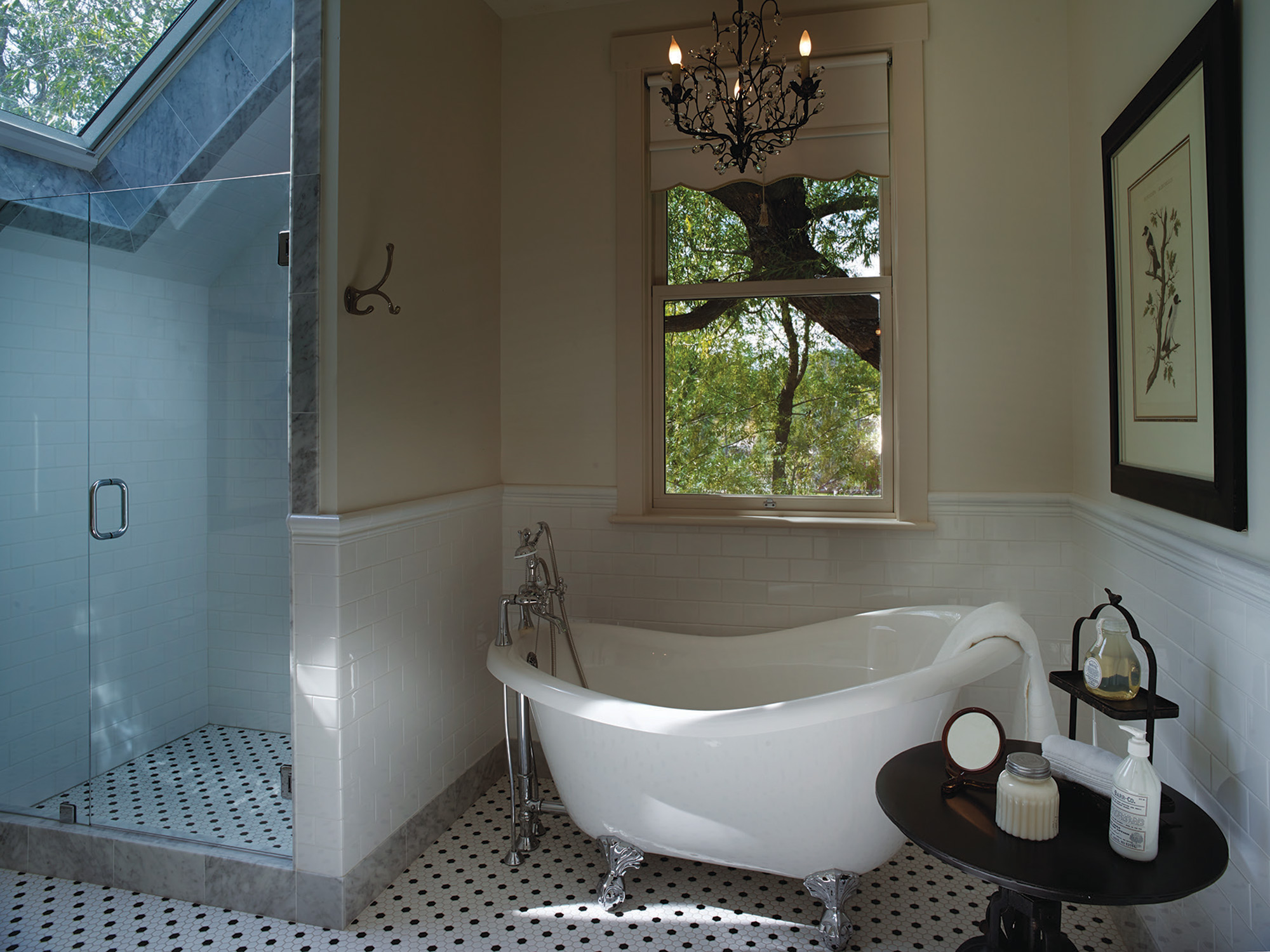 The expanded bathroom holds onto the homesteader theme but with bright, modern conveniences. 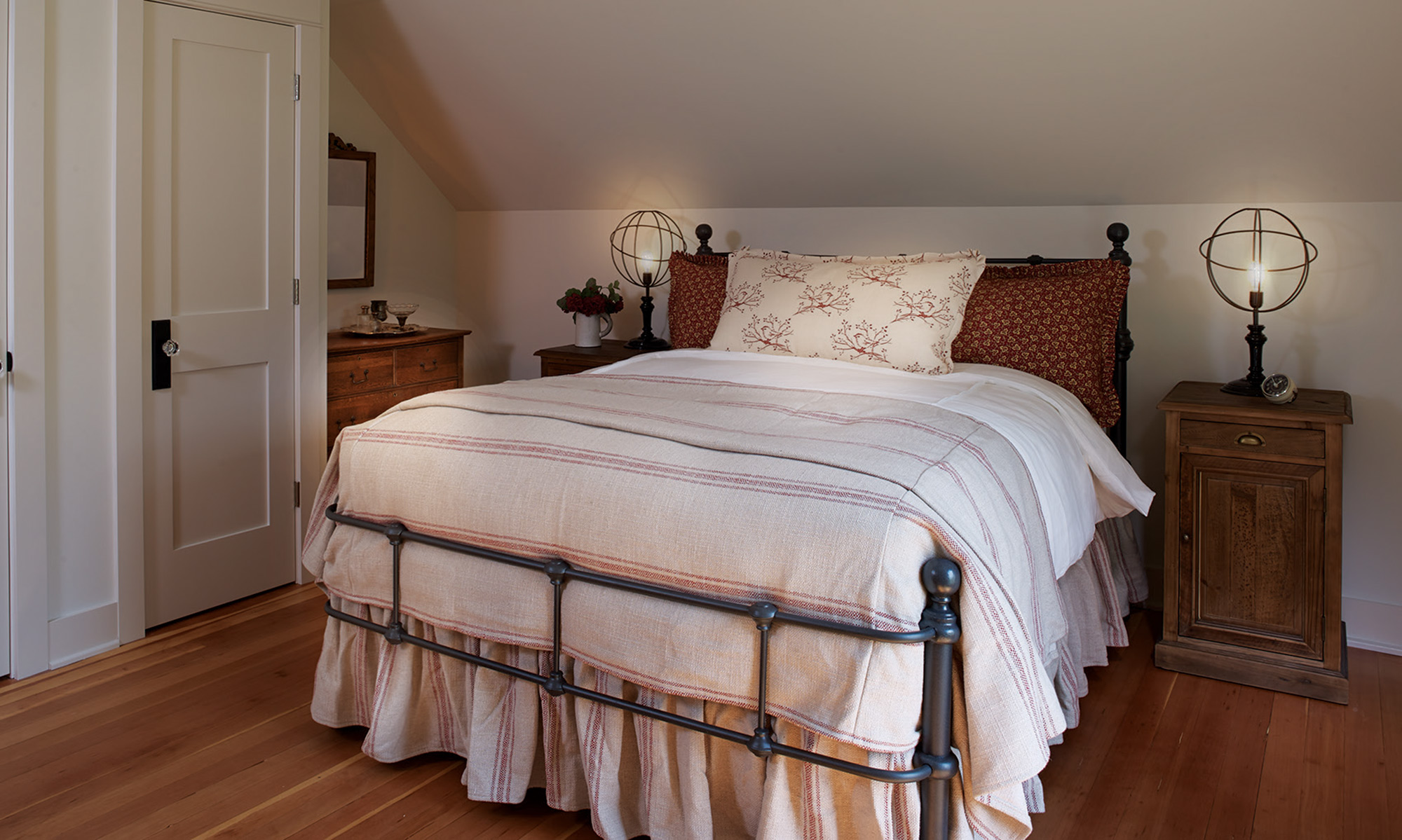 Bed frames, side tables, and fabrics were sourced from the Montana Expressions showroom. 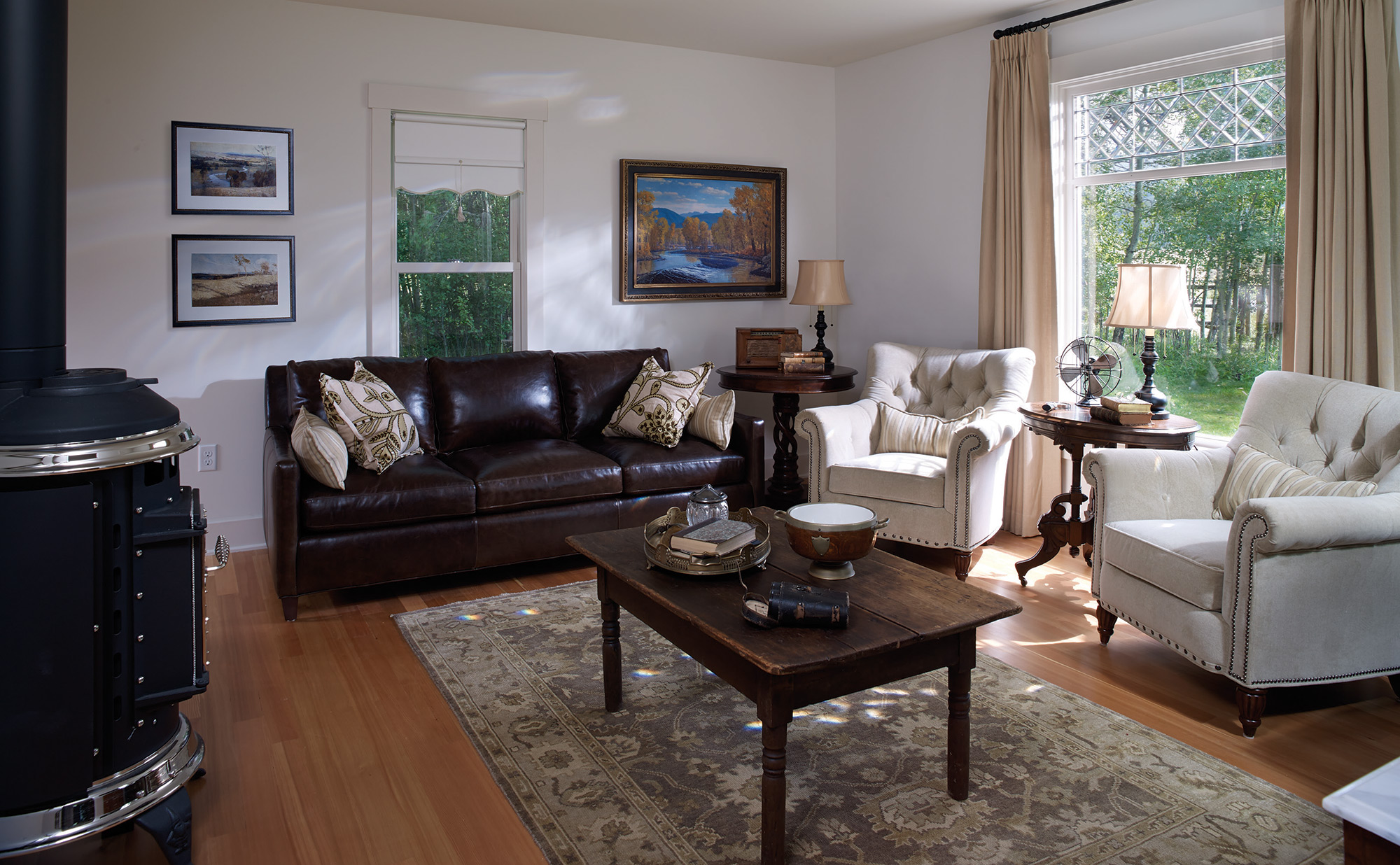 Montana Expressions interior designer Kathy Koelzer used accessories to recreate the era, such as a gas potbelly stove, antique books, lamps, and even a fan. 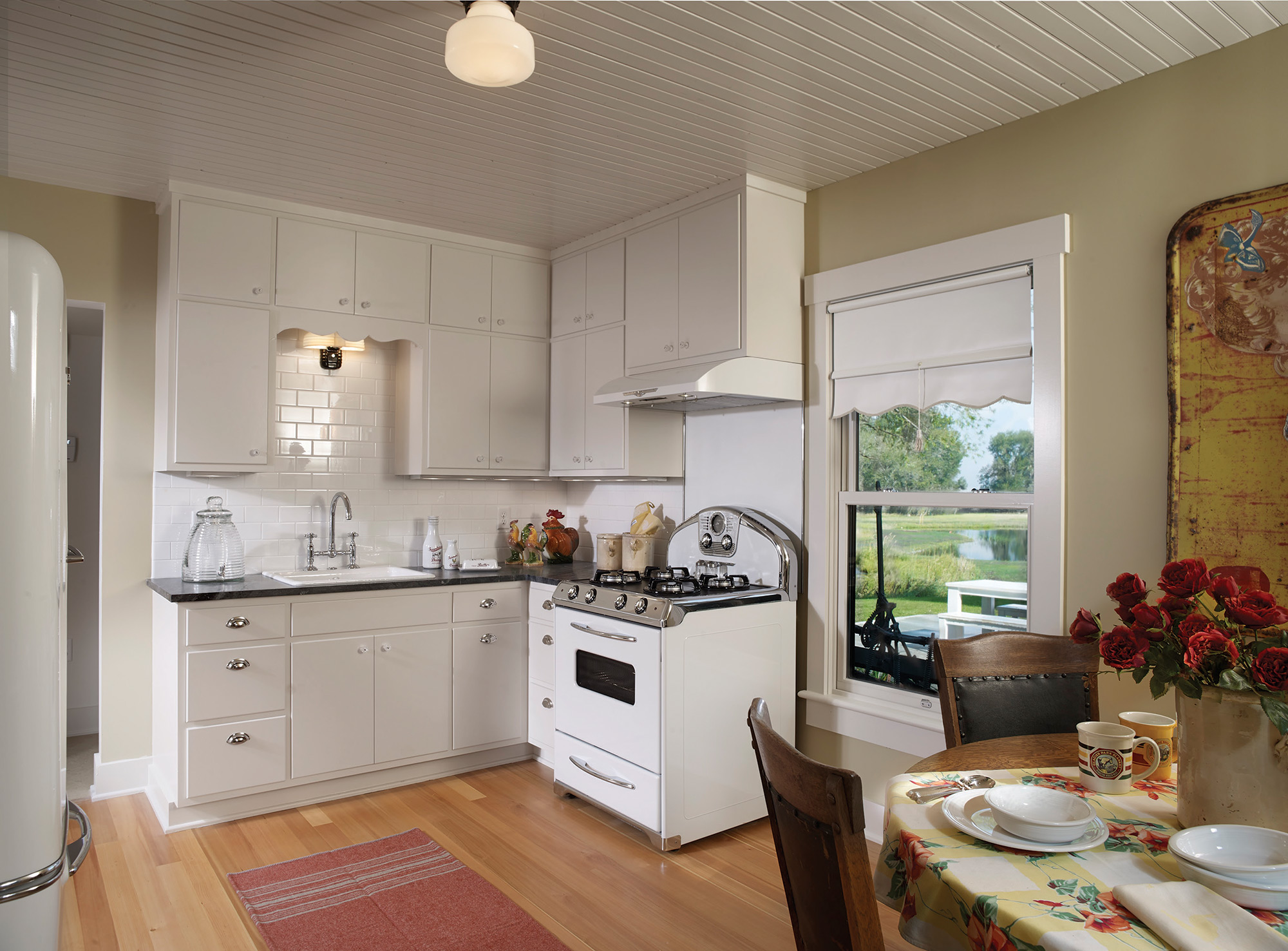 Designer Kathy Koelzer used simple painted cabinets and white tile to brighten up the kitchen; the mock-vintage appliances add to the farmhouse look. 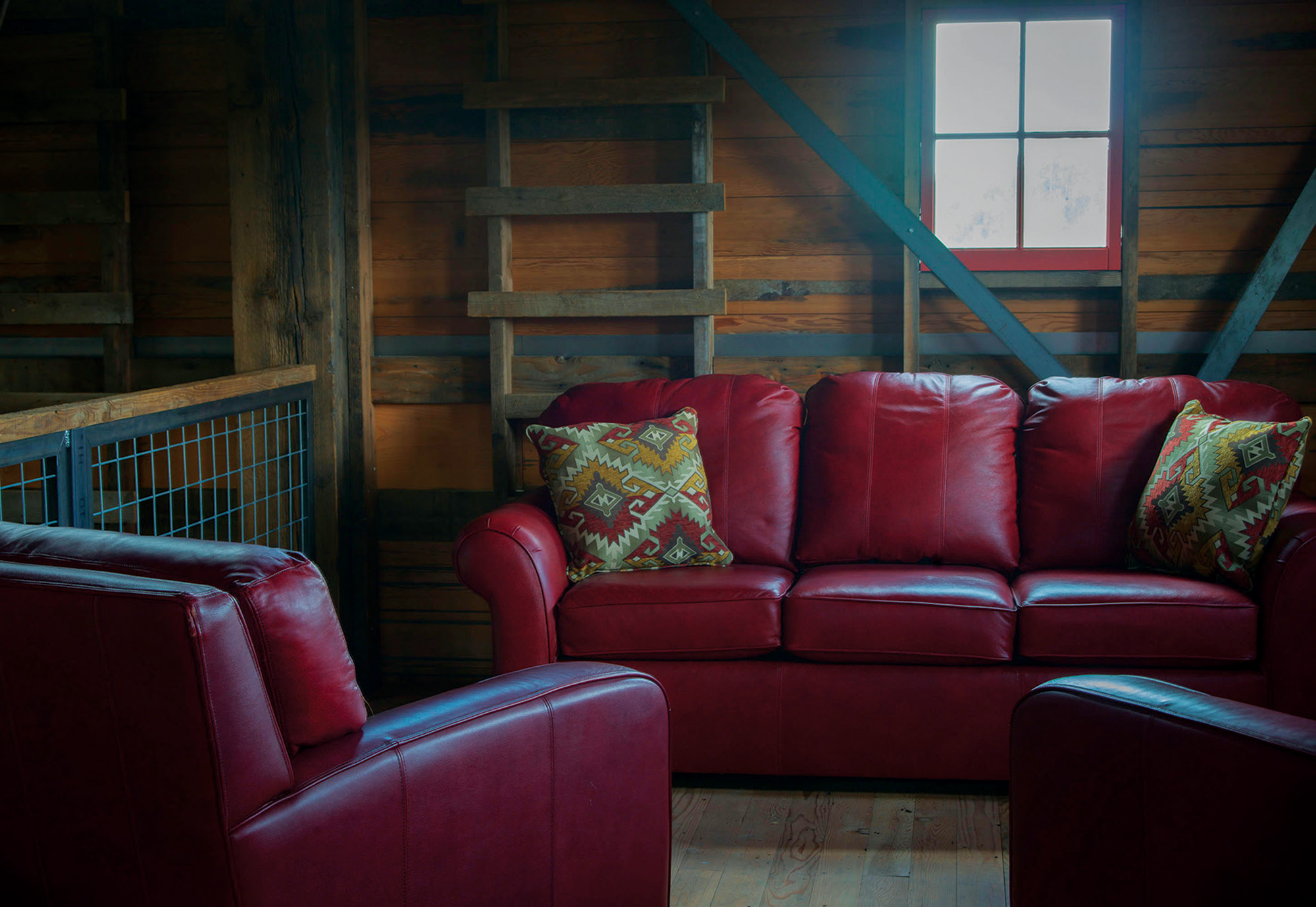 Koelzer used furniture, rugs, and accessories from Montana Expressions to create a sitting area in the barn. 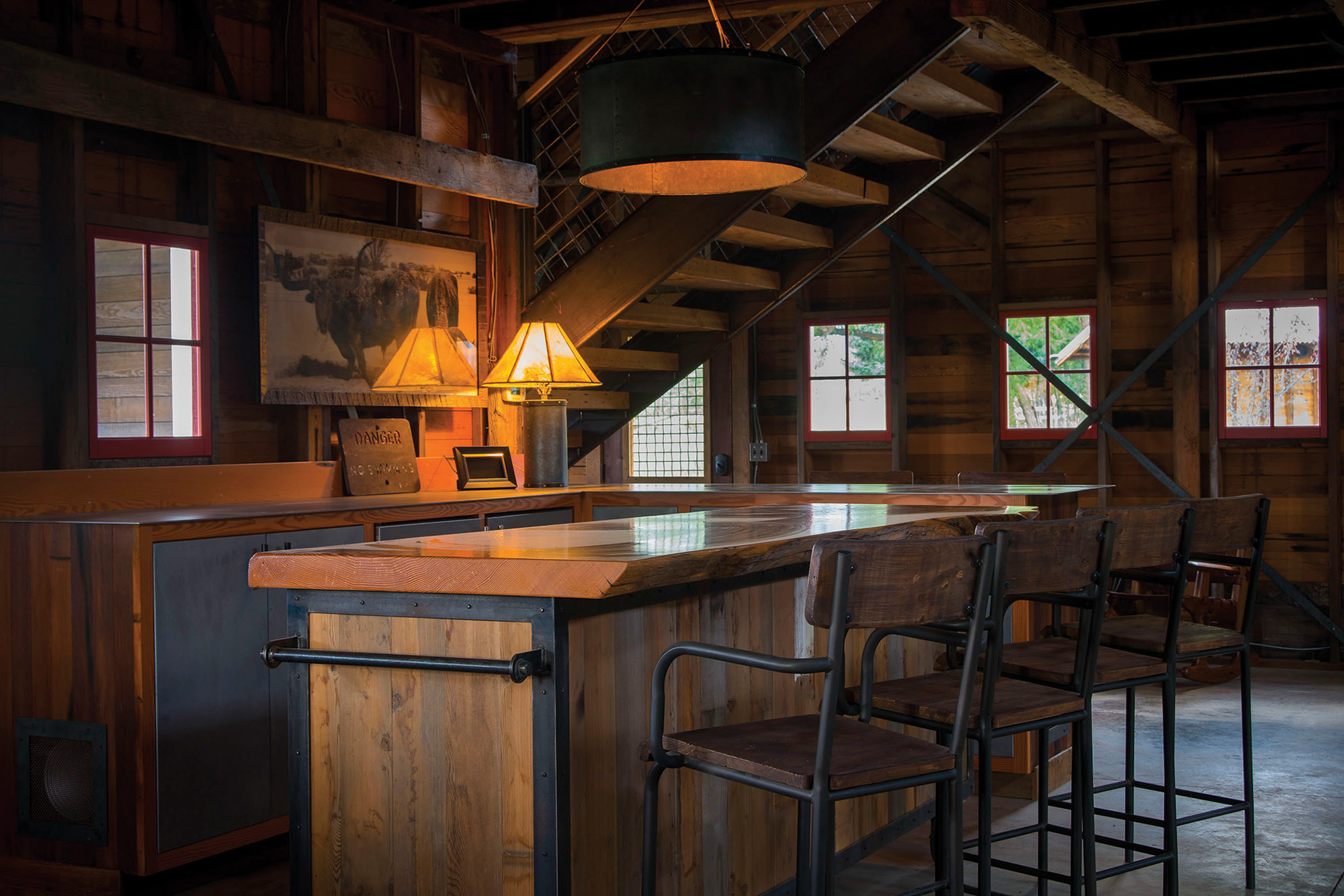 The barn features a bar and a patio on the second floor that looks out to the farmland and mountains.